Wake up, MSM: Donald Trump's comeback is not funny

This man is the most dangerous political figure in recent history. Stop making fun of him and tell the truth 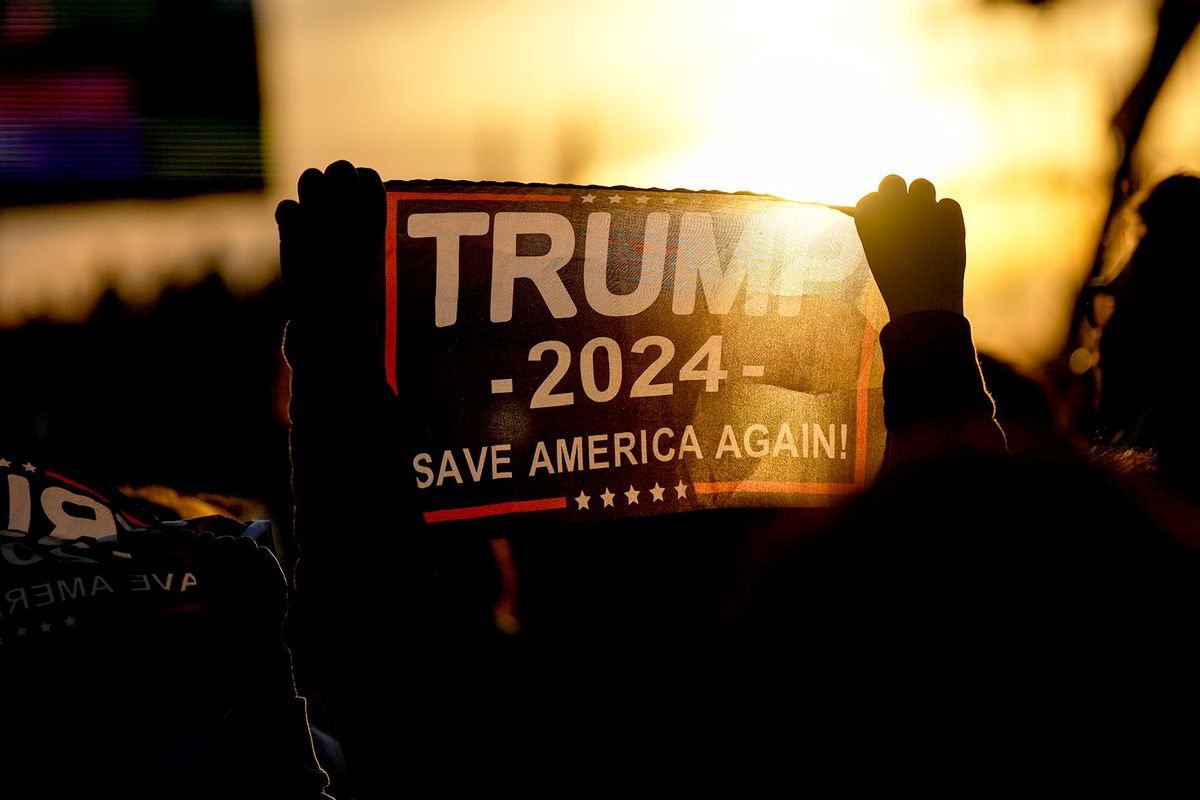 Supporters of former U.S. President Donald Trump await his arrival at a rally for Ohio Republicans at the Dayton International Airport on November 7, 2022 in Vandalia, Ohio. (Drew Angerer/Getty Images)
--

Serious, chronic illness is not funny. If left untreated, it can kill you.

My friend's father was diagnosed with diabetes some years ago. He worked long hours and didn't eat on a regular schedule. Yet he was overweight, probably because whenever he did eat he fueled up on fast food and soda. One day he fainted while repairing a car in his backyard and was diagnosed with diabetes. He vowed to change his lifestyle, and tried for a while. He joked with me about "catching the sugar" and "taking the needle," but those wisecracks took the place of treating his illness. His health rapidly deteriorated. He had to face amputations and loss of vision, but kept laughing — I suspect out of the sheer terror of realizing that he was dying of a preventable illness.

Consider Donald Trump, the proximate cause of one of America's most serious and chronic illnesses. There is nothing funny about this national health crisis. Trump literally attempted a violent coup and has clearly proven himself to be a fascist, a white supremacist and a demagogue. He has no sense of the public good, and through willful negligence and depraved indifference, was culpable for the deaths of countless people in the United States during the COVID pandemic.

Trump's threat to American democracy has not suddenly receded because the Democrats and the American people were able to gain some breathing room in the midterm elections.

Sleep no more: How do we escape Donald Trump's fascist dream machine?

Trump has given permission to his followers and other believers to engage in the worst of human behavior. Political scientists, historians, and other experts have shown that Trump's movement are pushing the country into a potential period of sustained right-wing violence. Both explicitly and through the use of stochastic terrorism, Donald Trump and his propagandists have incited violence against Black and brown people, liberals and progressives, LGBTQ people, Muslims, Jewish people and others deemed to be less than a "real American."

Last week, Donald Trump finally announced that he is once again running for president. As I wrote at the time, his speech on that occasion "felt like a remix of his infamous 2017 'American Carnage' inaugural address, full of fabrications, threats, victimology, incitements to violence and outright hate speech." Here are Trump's actual words:

I believe the American people will overwhelmingly reject the left's platform of national ruin.

Our southern border has been erased and our country is being invaded by millions and millions of unknown people, many of whom are entering for a very bad and sinister reason. And you know what that reason is.

Under Biden and the radical Democrats, America has been mocked, derided and brought to its knees, perhaps like never before.

The cities are rotting, and they are indeed cesspools of blood.

Anyone who truly seeks to take on this rigged and corrupt system will be faced with a storm of fire that only a few could understand.

In a post on his Truth Social site a few weeks earlier, Trump even suggested that the United States is an "evil" country:

The Witch Hunt continues, and after 6 years and millions of pages of documents, they've got nothing. If I had what Hunter and Joe had, it would be the Electric Chair. Our Country is Rigged, Crooked, and Evil — We must bring it back, and FAST. Next stop, Communism!

The clear implication of that rhetoric is that Trump, the Republicans and the larger neofascist movement must engage in a revolutionary project to cleanse such "evil" by destroying American democracy and rebuilding it according to their preferences.

How did the mainstream media and the pundit class respond to Trump's 2024 presidential campaign announcement? For the most part, with mockery and contempt, as if they were writing movie reviews instead of warning the American people about one of the most dangerous figures in American history and what his formal return to political life is likely to mean.

Trump's speech was variously described as "boring." "flaccid." "dead," "low energy," "stupid," "tedious" and "lacking excitement." More troubling still, some of the sharpest and most incisive commentators in the American media retreated into such descriptions.

Donald Trump is the leader of a neofascist movement that has repeatedly demonstrated its propensity for violence and contempt for democracy. There is nothing funny about any of this. If this same scenario were unfolding in another country that had barely survived a violent coup attempt, the tone and language would have been very different. This defensive contempt and similar attempts to downplay the seriousness of Trump's return serve to illustrate how much political deviancy and malignant normality have become seen as acceptable in the Age of Trump.

As many of the most important scholars, activists and journalists have articulated in various ways over the last decade or more, in the longer-term view the "conservative" movement and the global force of neoliberal capitalism actually birthed Trumpism and neofascism, and are not separate from it. The fascist project is even now being massaged, polished and mainstreamed as the "new normal" of the Republican Party, and thereby acceptable to the media and political class, as well as "ordinary Americans."

At the inaugural Democracy Summit held last week at Howard University, media scholar Jay Rosen suggested that the American media must embrace pro-democracy journalism that goes beyond superficial horserace coverage to focus on more important questions: What are the stakes involved if a given candidate wins an election? How will that outcome impact the lives of the American people and the future of their democracy?

Margaret Sullivan offered this advice in a Washington Post essay last month, starting with the observation that after six years, "we journalists know a lot more about covering Trump and his supporters":

Too many times, we acted as his stenographers or megaphones. Too often, we failed to refer to his many falsehoods as lies. It took too long to stop believing that, whenever he calmed down for a moment, he was becoming "presidential." And it took too long to moderate our instinct to give equal weight to both sides, even when one side was using misinformation for political gain.

It's been an education for all of us — a gradual realization that the instincts and conventions of traditional journalism weren't good enough for this moment in our country's history. As Trump prepares to run again in 2024, it's worth reminding ourselves of the lessons we've learned — and committing to the principle that, when covering politicians who are essentially running against democracy, old-style journalism will no longer suffice….

In every way, Trump was a deeply abnormal candidate, but the news media couldn't seem to communicate that effectively or even grasp the problem. Instead, his every unhinged, middle-of-the-night tweet was covered like legitimate news. To be fair, the media was applying a standard that had made sense up until that moment: When a major presidential candidate says something provocative or worse, it's newsworthy. The problem is that we were applying this old standard to a candidate who was exploiting it for his own purposes — while seeking to undermine democracy itself.

Sullivan concluded by arguing that in this situation journalists must provide "thoughtful framing and context." It is no longer sufficient to "repeat what's being said" without helping to "explain what it means":

All of these suggestions go against the grain of traditional politics coverage. Undoubtedly, this approach will draw accusations of bias from the right; undoubtedly, journalists and news leaders will be put on the defensive. They'll need to get over that. The stakes are enormously high. Doing things the same old way isn't remotely appropriate.

That captures why writing about Donald Trump and his neofascist movement as if one were writing about a noxious TV sitcom is wholly insufficient to the level of threat and danger. Certainly it's important to use humor and satire strategically, as a way of creating opportunities for resistance and empowering the long struggle for democracy. It is also important to examine the emotional dimensions of Trumpism and its allied forces. Emotions are central to politics, and especially to fascism and other forms of fake populism.

But mockery and laughter on their own are no substitute on their own for rigorous pro-democracy journalism. Too much of America's news media is eager to point fingers and crack jokes instead of learning from its numerous errors in normalizing Trump and the larger neofascist movement. He who laughs last, laughs loudest. If those with a public platform do not heed that wisdom, they will allow the darkest forces in American politics to have the last laugh.

about the midterms and the aftermath