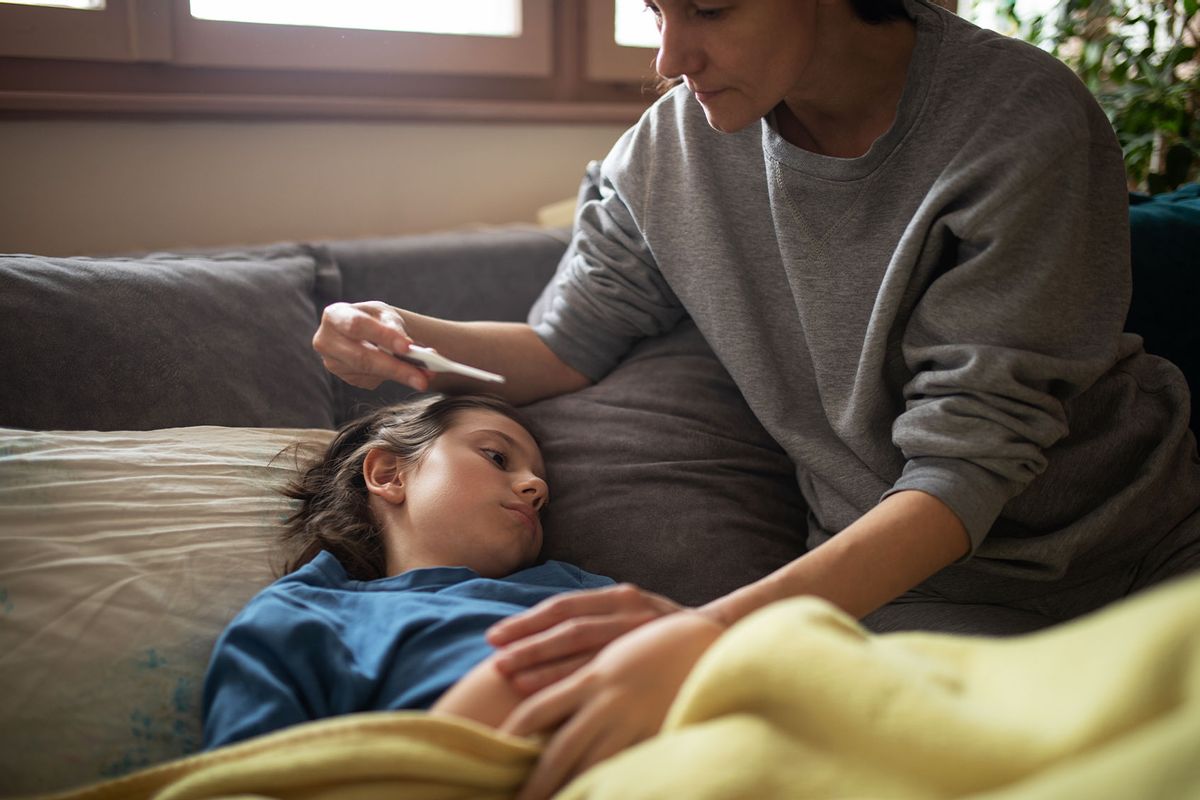 Boy lying sick on the sofa at home while his mother takes care of him and helping him to measure his temperature with a digital thermometer. (Getty Images/miljko)
--

The SARS-CoV-2 virus is unusual, among other reason, for the oddly wide range of symptoms associated with being infected. Some patients lose their sense of smell, others experience heart failure or suffer from strokes — while others (perhaps unsurprisingly for a respiratory disease) with COVID-19 experience any one of a number of lung ailments. As doctors in hospitals and clinics throughout America grapple with the long-term ramifications of the COVID-19 pandemic, medical scientists are acquiring as much raw data as possible about the ever-growing spectrum of symptoms.

The latest COVID-19 discovery is a particularly troubling one given that it relates to children.

US ranks last among peer nations for COVID-19 mortality: study

As explained in a recent study in Neurology, the medical journal of the American Academy of Neurology, patients who were infected by the SARS-CoV-2 virus (which causes COVID-19) are at a higher risk of suffering seizures and epilepsy than patients who suffered influenza infections. (Influenza, like COVID-19, is also associated with a wide spectrum of symptoms). The authors also found that the threat of seizures and epilepsy is greater in children — and in people whose earlier COVID-19 illness was less severe, rather than more so.

"The neurology workforce should be prepared for a significant increase in the number of patients with seizures and epilepsy."

In their research, the researchers accessed data from the linked electronic health records of over 81 million patients — finding in the process that overall 0.69% of COVID-19 patients experienced new onset seizures, while 0.30% of them experienced new onset epilepsy. While there are possibly other risk factors that could have contributed to those ailments, the statistical correlation is too great to be dismissed as coincidental.

Perhaps more importantly: Because millions of people were infected with COVID-19, even seizure and epilepsy rates of less than 1 percent will still impact thousands of potentially unsuspecting people.

"Although the incidence of new onset seizures and epilepsy post-COVID infection was low, in view of the large number of people world-wide who have been infected with COVID-19 the neurology workforce should be prepared for a significant increase in the number of patients with seizures and epilepsy," the authors explained in an editorial attached to the study.

"It may be that the developing brain is more prone to epileptogenic mechanisms driven by COVID infection relative to what happens with flu."

Salon spoke by email with corresponding author Arjune Sen, a professor of neurology and head of the Oxford Epilepsy Research Group. While the scientists cannot identify a reason why children are more likely to suffer seizures and epilepsy after COVID-19 infections, there are some plausible hypotheses.

"We know that COVID affects children very differently compared to adults and it may be that the developing brain is more prone to epileptogenic mechanisms driven by COVID infection relative to what happens with flu, but why that may be needs more work," Sen wrote to Salon. He added that there will also need to be additional research on whether certain COVID-19 variants are driving this change, whether these symptoms are less likely to occur among vaccinated individuals, and what the exact mechanisms are behind these neurological sequelae.

That said, Sen was unambiguous about one thing: The need for widespread vaccination, since "even milder infection and infection in children can associate with post-COVID neurological sequelae."

Dr. Georges Benjamin, the executive director of the American Public Health Association and who was not involved in the study, told Salon that the new research "tells us that when the brain is invaded it can cause injury that results in seizures." He also hypothesized that "children are especially susceptible because they were not eligible for vaccination until late in the pandemic, and the general perception that persists today (which is wrong) that they have minimal impacts resulting in a lag in childhood [COVID-19] immunizations. We increasingly are finding that getting infected with the SARS virus even if asymptomatic can have serious medical implications."

Benjamin concluded, "This strengthens the public health need to reinforce vaccination for COVID for all populations and continued vigilance to avoid reinfection."