Feeding cows hemp seems to get them stoned — and their milk contained some psychoactive THC, too 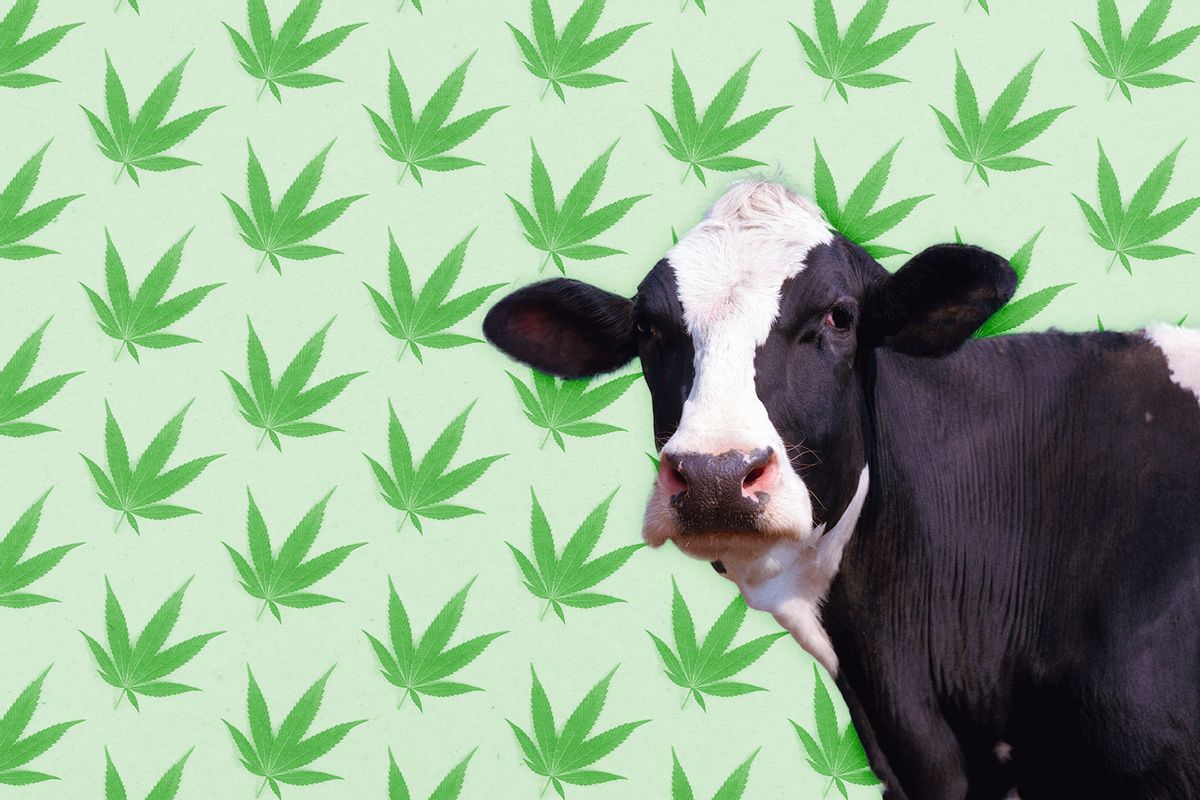 German researchers fed the variety of cannabis known as hemp to cows — and it seems to have gotten them pretty stoned. The livestock appeared more tired, yawned more frequently and seemed to have trouble standing. The cow's eyes even turned red, like the prototypical conjunctivitis seen in some humans after puffing a joint.

The study has raised eyebrows for obvious reasons: there's something whimsical about the idea of a stoned cow that tickles the public imagination. And while this may seem like just a weird experiment, getting cows stoned on hemp actually has broad implications for agriculture.

Hemp is one helluva crop. It's a less potent breed of Cannabis sativa, the same plant that gives us marijuana, but it's useful for food, medicine and textiles. Indeed, humans have been using it for thousands of years, but in the U.S. it was illegal from 1970 until 2018, when it was unbanned as part of the annual Farm Bill. According to U.S. law, hemp is technically C. sativa plants that contain less than 0.3 percent THC, (delta-9-tetrahydrocannabinol) which is the chemical in weed that gives people the munchies and that euphoric, "stoned" feeling.

Believe it or not, Republican leaders from Kentucky, including Sens. Mitch McConnell and Rand Paul, were largely responsible for hemp becoming legal again. It makes sense, given The Bluegrass State was once famous for another type of grass. Kentucky was one of the first states to grow hemp in 1775, soon becoming one of the top hemp-producing regions in history, contributing a massive amount of hemp materials during both world wars. Not long after WWII ended, the domestic "war" on drugs began, and the hemp industry was caught in the cross-fire, even though it's pretty hard for humans to get stoned from hemp.

For cows, however, it may be a different story. (More on that in a moment.)

The hemp-eating cows had lower levels of stress and inflammation markers, and laid around relaxing for an hour more per day.

Today, as demand for tobacco wanes, Kentucky farmers are switching back to hemp in hopes of making a profit. Hemp fever has swept the country and many farmers have been encouraged to feed the plant to their livestock. In early November, the National Industrial Hemp Council of America sent a letter to the U.S. Food and Drug Administration urging approval of hemp seed as an animal feed ingredient. Until that happens, the practice is not legal.

Yet some research, including a federally funded study published in March in the journal Scientific Reports, has suggested that hemp can help cattle relax. Researchers from Kansas State University, with the help of a $200,000 grant from the U.S. Department of Agriculture, fed eight Holstein cows hemp mixed with grain and collected blood samples, noting "significant differences in the activity" of hemp-fed cows versus controls. The hemp-eating cows had lower levels of stress and inflammation markers, and laid around relaxing for an hour more per day.

But a new study in the journal Nature Food suggests giving cows hemp could pose some potential problems, namely that it could contribute to milk that contains high levels of THC, the chemical in cannabis that gets people stoned.

Researchers from the German Federal Institute for Risk Assessment and the Chemical and Veterinary Analytical Institute ran an experiment with ten lactating Holstein Friesian dairy cows divided into two groups. The bovine guinea pigs were normally fed corn, but their diets were switched to either low or high amounts of hemp. Scales on the feeding troughs allowed the scientists to measure how much the cows ate.

The cows' milk contained levels of THC that exceeded certain safety thresholds for some consumers.

As mentioned, the change in diet made the cows act a little strange and develop red eyes. Their health wasn't negatively impacted, but they stumbled around, appeared more sleepy and their noses were more runny. They even ate less and produced less milk than usual. Although controls weren't used in this study, the unusual cow behavior stopped when their diets were switched off hemp.

Milk samples were collected twice per day, with blood and feces samples taken less frequently. When these were analyzed, the researchers found them chock full of cannabinoids. The cows' milk contained levels of THC that exceeded certain safety thresholds for some consumers, especially young people and pregnant women.

This result isn't entirely unsurprising. THC is a lipophilic chemical, meaning it really loves fat and likes to bind to it. That's why people who use marijuana can test positive for the drug for weeks — THC and its metabolites bind to fat cells and are excreted slowly over time. Cow milk is full of fat, so the THC passing through isn't so surprising. And cow's milk has been known to take on the taste of what cows eat for centuries or longer, perhaps even since humans began raising dairy cows.

Still, it is very unlikely that drinking this milk would get anyone high. Justin Brower, an organic chemist and forensic toxicologist from Raleigh, North Carolina, says he worries far more about the cows being uncomfortable than anyone who drank their milk.

The levels of THC may exceed certain consumer safety levels, but that doesn't automatically translate to risk. Some guidelines — in this case, from the European Food Safety Authority — don't really emphasize harms beyond expected "pharmacological effects" and you shouldn't "drive or operate a dangerous piece of machinery." In other words, these thresholds may be somewhat arbitrary.

Regardless, the levels in the study really only equated to one milligram of THC per gallon of milk. For reference, a standard dose of THC is considered five milligrams, while many consumer cannabis products contain 10 milligrams or more.

"The concentrations are so low, you would have to drink so much milk that you'd be throwing it up," Brower told Salon. "It's such a little amount of THC, that can't possibly affect anybody in any reasonable or realistic way."

"I don't think there's going to be any concern about you know, people stoned out of their minds because they had THC milk with their Froot Loops or something like  that," Brower added.

But he emphasized that this was a question worth exploring. "Maybe it's not the best thing for the cows. But it's still a good thing to know. So it's a good question to ask, and it was a good experiment to do."

Hemp is a popular plant for a good reason. It has many different uses, including making medications like CBD, and its seeds are very nutritious. It's even good for insects, especially bees. It's not going away, but the question of whether it makes good food for livestock needs further investigation. After all, the low hemp cows didn't seem to have this issue, so it might be an issue of how much hemp the cows ingest. But for humans, milk from cows fed hemp really doesn't seem to pose a huge risk.