Who missed Thanksgiving dinner this year? Everybody who got shot

We've had more than 600 mass shootings in America this year, including 35 so far this month. We're No. 1! 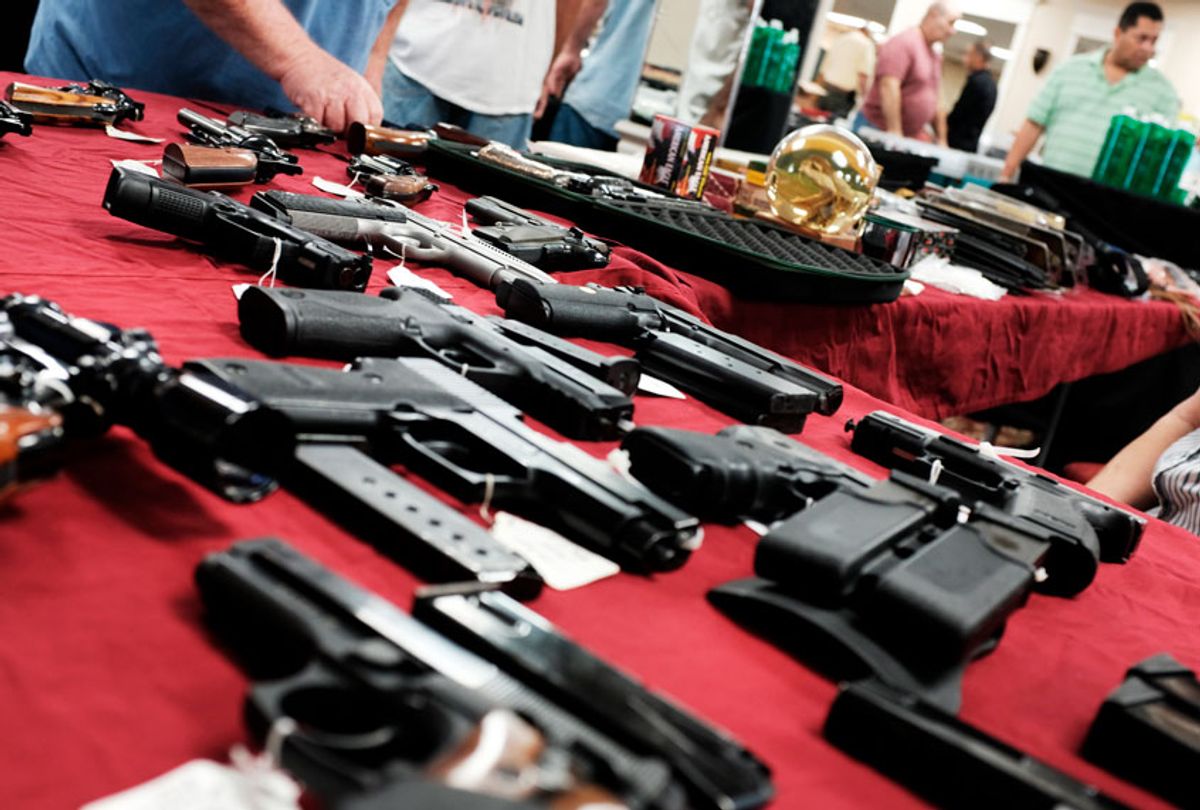 So far this year, 639 people have been killed in mass shootings. More than 2,500 were wounded, according to records kept by CNN. During the month of November alone, there have been 35 mass shootings, with a total of 185 people shot with a firearm, and 49 of them killed.

There will be no gun control: For many white Americans, the idea of the gun is all they have left

As we count our blessings that we were not among the dead during this Thanksgiving week, let's have a look at the mass shootings that killed 45 people during this month alone, sending 140 to the hospital.

Nov. 1: In East St. Louis, Illinois, two people were killed and three were wounded when a fight broke out after an argument.

In Baltimore, three adults and a teenager were wounded in a nighttime shooting.

In Denver, one person was killed and five were wounded in a drive-by shooting.

Nov. 2: In Hattiesburg, Mississippi, two people were killed and three were wounded in a shooting downtown.

Nov. 4: In Chicago, four men were wounded in a shooting on the street in the city's Humboldt Park neighborhood.

In Orlando, a 23-year-old man shot and killed a four-year-old girl and three women.

In La Plata, Maryland, four people were shot dead in a house.

Nov. 5: In Gainesville, Florida, five people were shot and wounded outside a grocery store.

In Philadelphia, nine people were shot and wounded while they stood outside a bar in the city's Kensington neighborhood.

Nov. 6: In Buffalo, four people were wounded in a mass shooting inside what police called a "party venue."

In Jordan Township, Pennsylvania, three people were killed by the same gunman in two separate locations.

In Chicago, one person was killed and three were wounded in a shootout with a security guard outside a nightclub.

In a second Chicago shooting, five people were wounded at a birthday party on the city's Southwest Side.

In Tulare, California, five people were shot and wounded during an argument after a drag race.

Nov. 7: In McAllen, Texas, a man shot and wounded four of his neighbors during a dispute over a palm tree.

Nov. 11: In Jersey City, New Jersey, four people were wounded in a shooting on the street.

Nov. 12: In Indio, California, one person was killed and three wounded in a shooting on the street.

In Fort Worth, Texas, four people were shot and wounded in an apartment complex.

Nov. 13: In Enfield, North Carolina, one adult was shot and killed, and five adults were wounded along with a teenager at an outdoor bonfire.

In Omaha, Nebraska, one person was shot dead, and seven others were wounded at an early morning gathering on the street.

In Philadelphia, four people were shot and wounded during an argument at a nightclub.

In Memphis, four people were shot and wounded outside a high school.

In Charlottesville, at the University of Virginia, a man shot and killed three students and wounded two others after a school bus trip off campus.

Nov. 16: In Phoenix, a man shot and killed his wife and three children and then killed himself.

Nov. 17: In Cabo Rojo, Puerto Rico, three Customs and Border Protection agents were shot, one fatally, along with a suspected drug smuggler.

Nov. 18: In Chesterfield County, Virginia, a woman and her three children were shot and killed in what police called a "domestic dispute."

Nov. 19: In Colorado Springs, a gunman with an AR-15 style rifle shot and killed five people and wounded 25 others inside Club Q, a gay bar and nightclub.

Nov. 20: In Philadelphia, Mississippi, one man was shot and killed, and six others were wounded during a dice game on a farm.

In Dallas, four people were wounded during an argument outside a pool hall.

Nov. 22: In Chesapeake, Virginia, a night manager at a Walmart killed seven people and wounded six others before killing himself inside the store.

Nov. 23: In Philadelphia, four high school students were shot outside their school just after early dismissal for Thanksgiving in a drive-by shooting.

In Temple Hills, Maryland, four teenagers and one adult were wounded in an unexplained shooting.

Nov. 24: In Houston, a man walked into a home while people were having Thanksgiving dinner, shot two people dead and wounded two others.

That's just this month, folks, and it's not over yet. These United States are on track to beat last year's total of 690 mass shootings during the 365 days of 2021. Whatever number we end up with this year, guns are being used to kill multiple people nearly twice a day on average, and that doesn't count the number killed in shootings that kill or wound less than four people at once.

So if you made it through Thanksgiving without being shot, watch your step this weekend in grocery stores, bars, nightclubs and even walking down the street. There are enough guns out there in private hands to put a bullet in every one of us with plenty of ammunition left over.

I hope you have a nice weekend, if you survive. If not, you'll have plenty of company as a statistic.

on guns in America