Being a caregiver for the elderly aged me prematurely

I was a caregiver for the old and frail. Eventually, the emotional labor made me frail, too 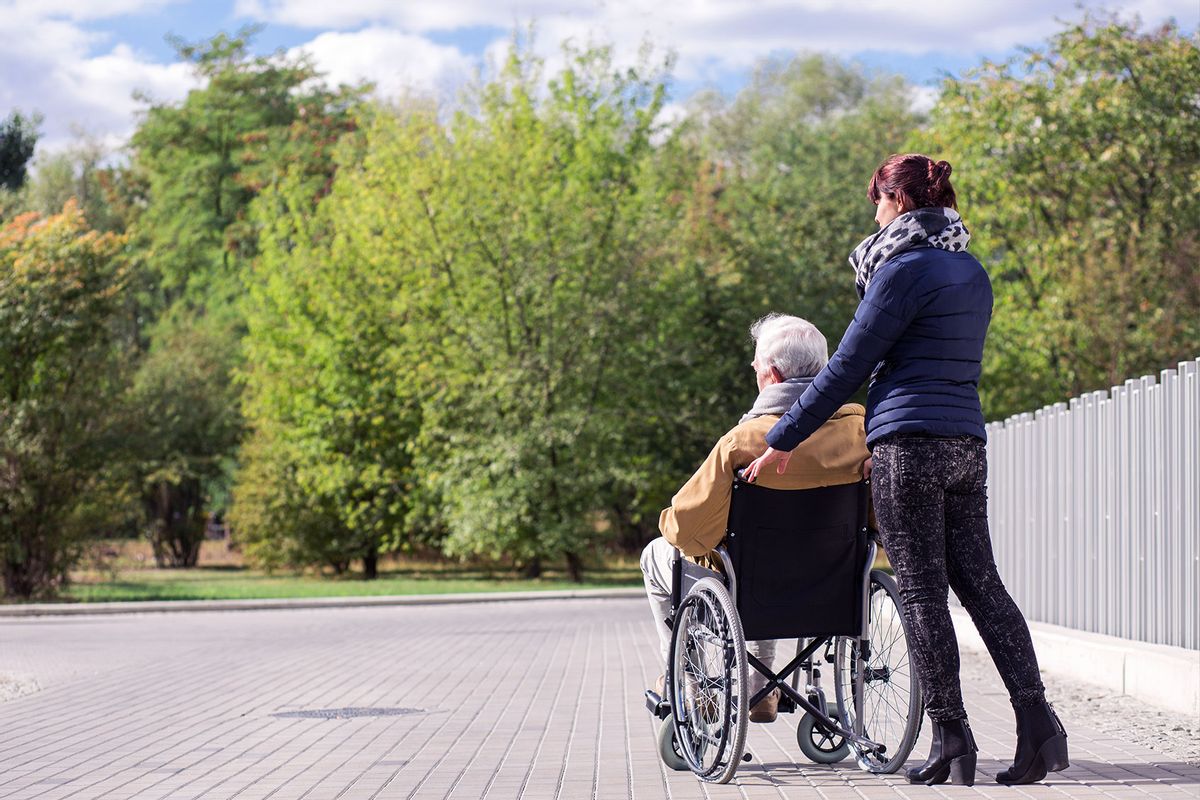 Senior man and assistant in the park (Getty Images/Katarzyna Bialasiewicz)
--

On my first Sunday in Florida, when I visited Cecile, her care team pulled me aside and quietly told me that her cancer had spread. I sat at her bedside, played songs and shared a pot of tea with her. I sang ditties from movie-musicals and Cecile's favorite folk songs; the louder notes were just enough to drown out the sound of 90-year-old Vicky crying from next door, or the percussive noises emanating from Cecile's bedpan.

Though I don't look like it in this setting, I am, essentially, a gig worker: A few times a year, I accompany elderly people to Florida as an aide, hired by individual families. Professionally, my job title is up for debate; I like to think of myself as a surrogate grandaughter. When I'm not working in Florida, I shoot photos on film; when I am at work, I visit isolated elders, hopping from retirement home to long-term care residence. Winter is typically seasonally warm in Florida, and a good time to escape the social pressures of winter parties — you know, young people stuff. I've always been drawn to these kinds of places: In my youth, I performed and sang in retirement homes, which helped me overcome my battle with stage fright. Though I am a filmmaker now, I still find time to fly down for gigs like this.

Entertaining seniors is a relatively nuanced gig, as far as gigs go. Sometimes, I sing to my clients, as with Cecile. Other days, it's more relaxed: one day, I meet with a woman named Sharon, and after singing to her we watch "Golden Girls" reruns together.

Help: I've fallen deep into the chasm of emotional labor, and I can't get up.

Though I am in my twenties, not "old" yet, I find myself slipping into their mindset. The topics of conversation are funerals, aging; I think about the things that seniors think about, watching the shows they watch, absorbing the commercials they absorb. Embedded deep in my brain on replay lives a Life Alert commercial, in which an incongruously cheery narrator shouts, "Help! I've fallen and can't get up."

Help: I've fallen deep into the chasm of emotional labor, and I can't get up.

On the first week in Florida, I sang for an hour to a group at a home; after, one of the elderly onlookers told me that I was "thin" for someone with my range. This is perhaps astute: like many caregivers, I often wonder if I am neglecting my own health in order to focus on their bodies' needs, rather than my own. Ironically, for someone working in a healthcare facility, I don't have American health care — I'm Canadian. What would happen if I fell and couldn't get up?

But this is what I tell myself about myself: When I'm in Florida, singing to the elderly, I exist as a companion, a side character in their lives. That is my role; I'm not the protagonist in this world, as I am — I think — back home in Toronto. In Florida, I'm inching my way closer to my clients, and building relationships with them; while they are inching closer to death. Ours is a relationship in recession.

During my second week in Florida, I made the rounds in Boca Raton, tailoring my singing tracks to a given day's audience. I developed a schedule: On Tuesdays, I'd hit a Jewish 55+ community; Wednesdays, I'd do a social music night for grandparents with their offspring. This is the perfect moment for classics like Somewhere Over the Rainbow and Getting to Know You — songs that bridge gaps between the generations, and invite audience participation.

Thursdays were my favorite day because I got to spend time with Nancy, one of my favorite clients. Nancy lived in a mansion off of South Ocean Boulevard; her son would visit for Christmas and events at Mar-a-lago, Trump's infamous country club where he is a member. I typically try to leave her house before he arrives. Apart from her caregivers and these occasional visits from her son, Nancy is isolated.

When women can't quit the emotional labor habit: "It's hard to give up that gold star"

Nancy is a tough cookie, the kind so hard that it'd break her dentures on the first bite. Nancy criticizes the way her cleaner mops, and her shoulders flop whenever she is asked to compromise her makeup routine.

On this particular day, I sang for Nancy, while her coral-painted lips twinged in agitation. After I finished my set, Nancy told her nurse that she had to pee.

I exited to fetch the walker in the next room, then heard a thump, and a wail. Nancy had broken her hip.

In the coming weeks, Nancy got surgery. I prepared for her homecoming, making the bed and writing a sweet note for her that she would see upon her return.

Miraculously, she recovered. In a month, Nancy was back from the hospital. Then, it was my job to fetch her groceries at Costco: her shopping list included her prescription-pain meds, Pedialyte and pumpernickel bread. She started rehab soon and has insisted that the fridge be stocked, and that all be ready before I had to leave Florida to go back to Canada to act in a movie.

"You don't look like someone who would break a rib. You're young, you're healthy." He told me to eat a steak.

I arrived at Costco and lined up at the pharmacy, waited around for her prescription, then headed over to the beverage aisle. Next to me, some young men bearing the cultural imprimatur of college bro were loading their carts with huge cases of seltzer. The Pedialyte cases were equally heavy and huge. For a moment, I debated asking them for help, but I wanted to assert my independence. I could do it myself…

As I reached for the large case of Pedialyte, the college guys' shopping cart lurched towards me. I pivoted left whilst carrying the case to avoid a collision. That pivot was not smooth: as soon as I lifted the case, I felt something akin to daggers in my side. Without being fully cognizant of it in the moment, it seems their cart had struck me, and I'd twisted my torso. I cried out in pain.

I winced during the entire drive back to Nancy's. The throbbing was too much to bear; I realized I couldn't keep working. I left and drove — reluctantly — to an Urgent Care. Reluctantly, because I'm always a Canadian on American soil, and thus uninsured.

When the doctor saw me he asked, "Why are you here?"

I told him I think I injured my rib. He was Eastern European and glib: "You don't look like someone who would break a rib. You're young, you're healthy."

He told me to eat a steak.

"I'm kosher," I said. He informed me that Costco sold Hebrew National hot dogs. After studying, he told me I'd sprained a rib with bruising on the bone. Another blow to the rib would cause permanent damage, he said. Finally, he left me with a warning and a bill.

I didn't ask to be reimbursed by Nancy or her son. The experience and medical debt had been a cursed gift. A sprained rib was a privileged wake-up call: my devotion to the care of others had withered my own body.

On my next and final Thursday, I arrived at Nancy's still with a sickly-looking bruise on my torso. Before I sang, I pulled my usual, crystal water glass out of the cupboard, plus one for Nancy; but instead of filling it with water, I poured orange Pedialyte into both. We drank it together — two old, enfeebled souls with injured torsos.

Sitting there, injured, watching "Golden Girls" together, sipping Pedialyte, I wonder: Has this labor made me age prematurely? Many of my clients are wheelchair-bound or use walkers to get around.

I stand and sang again at the commercial breaks and muted the television advertisements. Perhaps, one day, I too will fall, and no longer be able to get up.

about the gig economy