Girls run the world, but should we have to? What writing a novel taught me about emotional labor

"The Fixer Upper" protagonist wrangles men for other women, and I found a similar tendency to sacrifice in myself 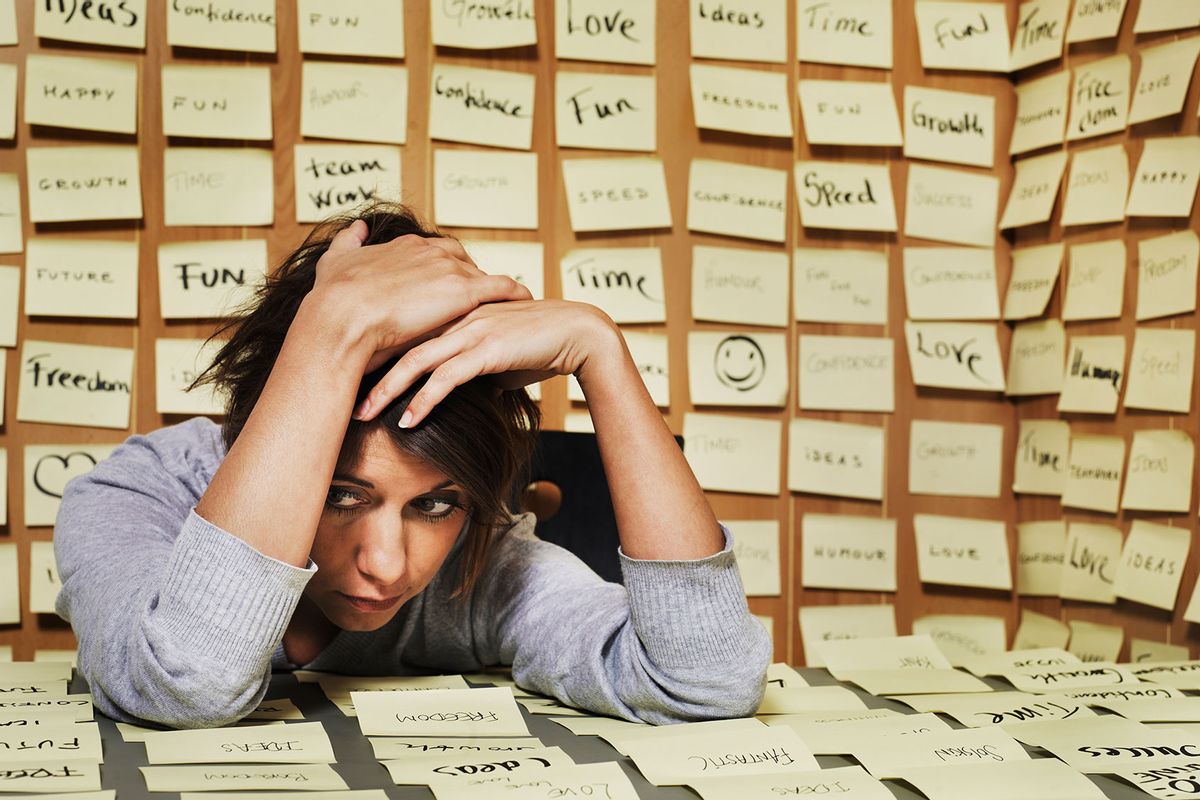 My husband calls me The Boss. Like, if he's asked to switch a shift at work, he'll say, "I've gotta check with The Boss. We might have something on." One might think that the freedom of not knowing your own calendar would be reserved for celebrities or high-powered businesspeople with personal assistants. But apparently, that list also includes my husband. And a lot of my friends' husbands and boyfriends.

I know I'm meant to see this as a good thing: that deferring to me as The Boss affords me the power or the control. But in a relationship, having that control also means bearing the burden of responsibility. It means being the one to remember everyone's birthdays and buy them Christmas presents; the one to book doctor's appointments, arrange the remortgage on the flat, and look into cheaper car insurance. It means writing "Research wills!" or "Get new passports!" at the top of your to-do list every week. And it means being the sole proprietor of the guilt that results when you inevitably never quite manage it all.

Quite frankly, I'd rather not be The Boss. It's fucking exhausting.

I was struck by how many women in particular had a history of partners — particularly male ones — who expected their person to "fix" them . . . Why do women so often find themselves in this situation?

Now, I do recognize what a privileged position this is to be in, especially compared to the way heterosexual marriage operated until quite recently. "Traditional" marriage of the 1950s sat women squarely in the backseat; we couldn't even get a credit card without a cosign from our husbands until 1974. So, surely, one might argue that having the power now is a preferable dynamic, that as every superhero movie tells us, "With great power comes great responsibility"? Is it a gross overcorrection for centuries of misaligned gender norms? Or still, is it possible that it's always been this way – that, to paraphrase the matriarch of "My Big Fat Greek Wedding," women really are the neck of the marriage, turning the head any way it wants?

How "weaponized incompetence" is killing marriages

I'll admit, I am partly responsible for this. I aspired to be Wonder Woman, to "have it all" and "do it all," out of a desire for a weird kind of independence where I was winning if I didn't ask for any help or admit I was overwhelmed. I have always taken pride in being organized and responsible, and it is hard to disentangle that from who I am regardless of my relationship status. But it's a lonely position to be in, because being at the wheel requires you to sacrifice your autonomy for the sake of others: to be the one to pull an all-nighter, or lay awake worrying about whether the bills will get paid, or if you're accruing enough in your pension, or if it's your niece's birthday this week or next week. (And who can you ask because she's definitely seven and you should know her damn birthday by now?)

And I know I'm not alone. As it became clear during the pandemic, women have taken on a disproportionate amount of responsibility in their home and family lives. We have not only taken on the majority of childcare whilst working remotely, but we are more likely than men to be put on furlough, and more likely to lose our jobs. The PwC report "Women in Work 2021" found that women now spend 7.7 more hours per week on childcare, evidence of the way in which "COVID-19 has exacerbated the already unequal burden of unpaid care and domestic work shouldered by women." What's more, experts are fearful that the pandemic will also adversely affect progress towards achieving pay parity between genders.

This is, of course, not to say that men contribute nothing to their relationships. My husband is incredibly capable and was incredibly capable before I met him; I could tell you hundreds of great things about him and my friends' partners. Nor is this to say that this imbalance of responsibility always run female to male — the contrary is definitely true too, especially when taking into account same-sex relationships or relationships in which one or more partners identify as non-binary. But the more I spoke candidly with my friends about their relationships and began to reflect on my own relationship history, I was struck by how many women in particular had a history of partners — particularly male ones — who expected their person to "fix" them. To be a bright-eyed manic pixie dream girl hanging onto their every word whilst they waxed poetic about The Smiths and grappled with the very serious business of being a teenage boy and, later, of being grown men. Why do women so often find themselves in this situation?

The seeming universality of this experience was weighing on me as I started writing my novel, "The Fixer Upper." It centers on a 30-something woman who gives more energy to her relationships than to her own life and – seeing how her past partners benefited from their time together – starts a business supporting women by "fixing up" their partners and shouldering that emotional labor on their behalf. I knew initially what this (entirely too familiar) experience might look like for people dating in their 20s and 30s; I didn't know the "how" or the "why" of it all just yet. But as I worked through Aly's story, the rationale behind both her experiences and my own habits became more clear.

It took writing a character so much like myself into existence to see the ways in which my approach to relationships was unsustainable and force me to prioritize myself more.

Women are socialized to believe that selflessness is the only way to ensure you are loved. That you are needed first, and then appreciated, and then, if you performed all your duties appropriately, you might be lucky enough to deserve love. It's certainly true of how I've operated and, unfortunately, it has stuck with me for most of my life: from the friends I never wanted to say "no" to, for fear of letting them down; to the ex-boyfriend who insisted we rent an expensive apartment together in London because his mental health couldn't cope with going home, even though I had to work two jobs to afford it (and I could have happily lived at home); or to the gaggle of male friends throughout my life who wanted a motherly figure to stroke their heads and tell them they were smart and lovely and misunderstood. People who are immeasurably selfless in relationships aren't so solely out of the goodness of their hearts: they are doing so because they have an unbridled and unfulfilled desire to be loved.

That can be a hard pill to swallow, and an even harder habit to break. Even now, in a loving, committed relationship, I'm aware of how being socialized to crave love has affected our dynamic.

And adding children into the equation – if you choose to do so – only exacerbates the situation. Case in point: for most of my life, the only thing I didn't sacrifice was my writing time. Writing is how I make my living, but it is also my creative outlet and my catharsis, and so it became my one, immovable boundary. But then I had a baby boy and, suddenly, a new man came into my life, whose needs demanded round the clock that I give up my bodily autonomy, my sleep schedule, and my understanding of whoever the hell I was before he came into the world. His arrival brought an entirely new wave of responsibilities to our home life – from vaccinations, baby groups, nursery viewings, developmental milestones, playdates – responsibilities that I now take on one-handed.

Parenting, of course, necessitates this kind of sacrifice in a way that romantic relationships do not. Yet as I began negotiating the diminished parameters of autonomy that come with new motherhood, it was the experience of writing a novel about the unequal division of emotional labor like "The Fixer Upper" that made me even more desperate to carve out even the tiniest space in my life where I was still "me." Where the caretaking and the organizing and "fixing" everyone's problems were not my defining traits. Ironically, it took writing a character so much like myself into existence to see the ways in which my approach to relationships was unsustainable and force me to prioritize myself more.

Many women aspire to the idea that we can "have it all." We're told we can be entrepreneurs and writers and mothers and students and wives and everything else. And not only that we can, but we should, we must. But I worry that we feel like we need to "have it all" at once: that as a generation of would-be Wonder Women, we are constantly trying to show how capable we are and, as a result, constantly feel like we're failing. And we're afraid to be honest about it, because while we work so hard to hold everything and everyone together, we give so much of ourselves to others in the process that we fall apart at the seams.

I don't really have the answer, because when you're spinning all the plates, simply letting them smash doesn't feel like an option. But I know I'm going to go back to ring fencing that tiny portion of time for me, so that I don't have to write books one-handed, and so that when my son grows up he doesn't default to relying on a partner for everything.

I'm going to ask for a demotion from being The Boss, because I don't want to fix anyone or anything anymore. I just want to be one of two people in a boat, each with an oar, paddling in the same direction.

Lauren Forsythe lives in Hertfordshire with her husband and son, and a cat that gets more spoilt by the day. She works in marketing, studied English and Creative Writing at the UEA and spends too much time trying to work out how she can retroactively add pockets to every piece of clothing she owns.