Why Wonder Woman is a queer icon (and always has been)

Happy Pride! This "superhero for bisexuals" and Lynda Carter have your back 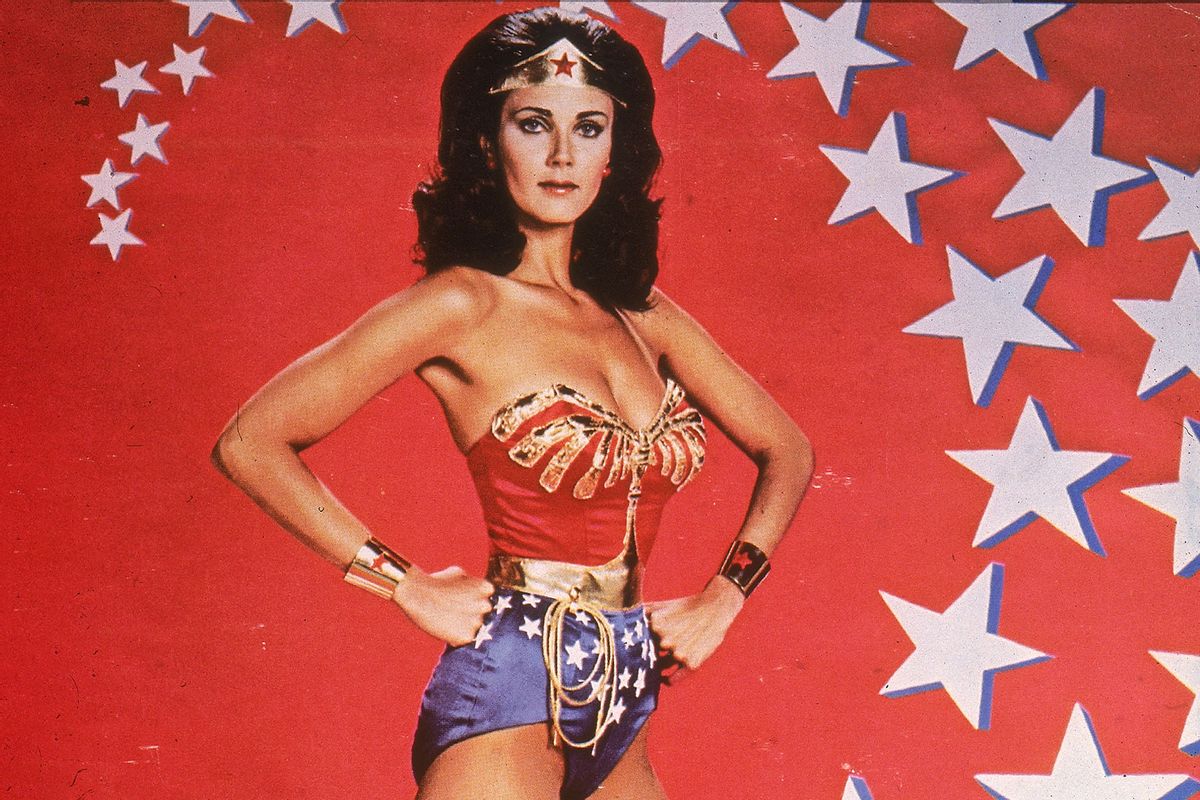 Promotional portrait of American actor Lynda Carter in costume in front of a backdrop of stars for the television series, 'Wonder Woman,' 1976. (Hulton Archive/Getty Images)
--

For Mother's Day this year, my child reverently picked out a Dolly Parton prayer candle for me, Dolly smiling and resplendent with fluffy hair and a pink sequined show outfit. Equally fitting would have been Wonder Woman (a poster from the 2017 film hangs above my desk). Light up your Wonder Woman candles now for Pride month, because the superhero is a queer and trans icon.

Lynda Carter said so, and she should know.

Carter played the superhero in the live-action TV series of the same name from 1975-1979, the embodiment of the character with her jet black hair, light eyes and starry hot pants. On Twitter on the first day of Pride, Carter wrote, "If you want to argue that she is somehow not a queer or trans icon, then you're not paying attention," and referenced the many fans who have told her Wonder Woman "helped them while they were closeted."

This is not a new phenomenon. For those who've paid attention, Wonder Woman also shares some innate qualities that make her not only celebrated in queer circles but queer herself.

RELATED: Will no one think of the tweens? Kids need more queer stories than just "Heartstopper"

Wonder Woman was created by writer Charles Moulton and artist Harry G. Peter. The physical appearance of the character was allegedly based both on Moulton's wife Elizabeth Moulton and that couple's partner Mary Olive Byrne. Yes, you read that correctly. Charles and Elizabeth were married and then Byrne later married both of them in a ceremony. The trio (perhaps a throuple, to use modern parlance?) lived together and shared their lives, raising four children.

Moulton's idea of Wonder Woman was of a modern, liberated woman. That includes being queer; specifically: bisexual, according to "Wonder Woman" comic writer Greg Rucka. When a commentor responded to Carter's tweet in all caps: "Wonder Woman IS NOT A SUPER HERO FOR GAYS!" Carter shot back, "You're right. She's a superhero for bisexuals!"

But the "Wonder Woman" movie actors danced around the notion of the superhero being openly queer, a dance that only became more desperate.

That's canonically true. As Anthony Gramuglia writes on CBR, "Wonder Woman may be the first bisexual superhero. Her bisexuality has been either implicit or explicit over the decades, and only now, in recent times, has this been given both a name and direct manifestation in art."

In Patty Jenkins' 2017 movie, the character muses matter-of-factly about same sex attraction ("men are essential for procreation, but when it comes to pleasure, unnecessary"). Wonder Woman resides on an island populated only by women, after all, which is, as Rucka said, supposed to be "paradise" where you can live authentically, be yourself and love who you love. Being raised in a society without men, her outlook was not been formed on the binary or even hetero. But the "Wonder Woman" movie actors danced around the notion of the superhero being openly queer, a dance that only became more desperate when the sequel, "Wonder Woman 1984" released.

Then last year, in the DC comic series "Dark Knights of Steel," Wonder Woman was illustrated kissing her girlfriend Princess Zala in a sunlit tableau.

From the very beginning, Moulton also worked into the superhero story of Wonder Woman his personal interests in bondage, dominance and submission – a look at sexuality that is not strictly tied to the bioessentialism of anatomy. Bad guys are often tied up. Wonder Woman has that magic lasso. Called the Lasso of Truth, it can hypnotize those in its constraints, return memories, squeeze out the truth or protect people. She wields it like a cowboy.

The notion of a secret identity may appeal especially to queer youth who do not have the resources or support to come out.

Like some other superheroes, especially those forced or choosing to live in our humdrum Muggle world, Wonder Woman has a secret identity, although it's murky. As The Hollywood Reporter writes, "What Wonder Woman does when she's not fighting crime has been in flux for much of the character's 75-year history." Part of this may be due to her immaculate origin: Diana, the Princess of the Amazons, was made out of clay and brought to life by Zeus. Try enrolling in public school with that spotty paper trail.

But that changed in the 1942 comic when Wonder Woman adopted the alias Diana Prince, based on an ordinary woman the character met, and managed to get a job as a secretary.

What I remember most from the classic TV show is Wonder Woman's transforming spin, when Diana pirouettes from an evening dress or contemporary casual or '70s workwear into her superhero costume, into Wonder Woman in a flash of blinding green light. Unlike Clark Kent, she didn't even need a phone booth. This female superhero changes in the open air, in alleys, on construction sites. She makes it work.

The notion of a secret identity may appeal especially to queer youth who do not have the resources or support to come out. You're a different person inside, even if some people can't or won't recognize you for who you truly are, even if you don't have a community yet. You have to keep the knowledge of who you are close, safe until you are safe.

In press for "Wonder Woman 1984," the most recent actor to step into the go-go boots and bullet-defying bracelets, Gal Gadot, mused that the queer community's embrace of the character may be because she's "the embodiment of femininity, and to be a strong woman and to celebrate that and owning it."

She fights the Nazis, but also for your right to be yourself, to live your life, to be safe.

It goes deeper than that. In every format, in every year, Wonder Woman is gorgeous, true. Her hair is perfect and bouncy, sometimes under a starry tiara, and her outfits shine: bright satin with skirts, hot pants and those high boots.

But Wonder Woman is also kind, one of the strongest features of Jenkins' first superhero film for me: her protectiveness. She's an activist. She fights the Nazis, but also for your right to be yourself, to live your life, to be safe. Queer kids need an icon like Wonder Woman, who exemplifies that you can be strong and loving at the same time.

After being deluged both with supportive comments about her assertion of Wonder Woman's queer icon status and a bit of angry criticism, the fiery Carter, an icon herself, recently posted a picture of herself in the '70s, fists raised, smiling and staring straight at the camera, with the caption: "Now here's one I call the 'ready to fight your homophobic relatives' pose. Just kidding. (Or am I?)"