Will no one think of the tweens? Kids need more queer stories than just "Heartstopper" 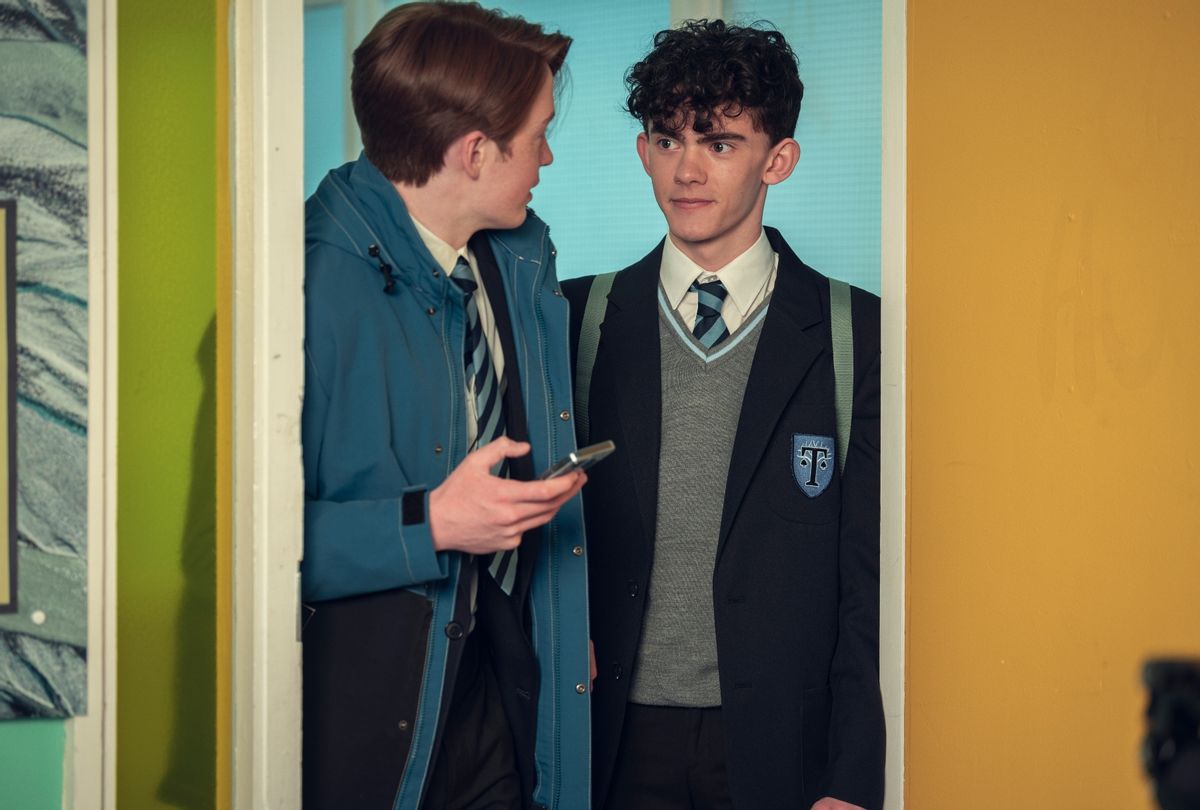 At 12 years old, I was first yelled at by a teacher for reading.

The class was Pre-Algebra, and though it was perfectly fine to read before the bell rang, my reading material, "Clan of the Cave Bear," was "not appropriate for a girl my age," according to the teacher. Perhaps the controversial novel with very adult scenes was not the best use of my time, but the school library didn't hold much for me, either. We had "Charlotte's Web," yet the rise of middle grade books was still years away.

Like many children, I read above my age. I wanted to see beyond my world. I wanted to read about kids like me, but also different from me and especially, older than me.

Tweens, children usually considered between the ages of 8-12, are a specific, misunderstood and often-ignored age group. The middle child of childhood, they can switch from a stuffed animal-loving kid to a music-blaring, moody teen, sometimes in the same moment (trust me: I'm parenting one). Netflix's "Heartstopper" is one of the few mainstream shows in recent memory that actually is aimed at this age group. The show was recently renewed for two more seasons, to the joy of viewers of all ages.

But "Heartstopper" is the outlier, bucking a disturbing trend: canceling shows that center queer youths and storylines — and a larger, national one: negating queer stories for all children.

Based on the graphic novel by Alice Oseman, "Heartstopper" follows a group of young British teens as they navigate school, friends and matters of the heart. Although an ensemble piece, its main character is Charlie (Joe Locke), who is gay and may be falling for his seemingly straight classmate, the kind boy he sits next to, Nick (Kit Connor). Other young characters, all compelling and with meaningful storylines, include Tao (William Gao), Elle (Yasmin Finney), Tara (Corinna Brown) and Darcy (Kizzy Edgell).

It's important for kids to realize they don't have to have all the answers or even any of the answers right now.

"Heartstopper" is heart-stoppingly earnest. Its main characters are young high-schoolers, and both the shorter format of each episode as well some of the visual touches, like cartoon fireworks and fall leaves and hearts, reflect that. It's nice to see the graphic novel — a hugely popular format with teen and middle school readers — find its way onto the screen in a way that feels natural, like an extension of the characters' feelings. Like their doodles come to life.

And "Heartstopper" was embraced with open arms. It landed on Netflix's Top 10 English TV titles in just two days and received a 100% approval rating on Rotten Tomatoes. The Guardian called it "possibly the loveliest show on TV." Viewers swooned, with many adults saying they wished a show like this had existed when they were kids, but kid viewers (like my own) also stayed riveted. 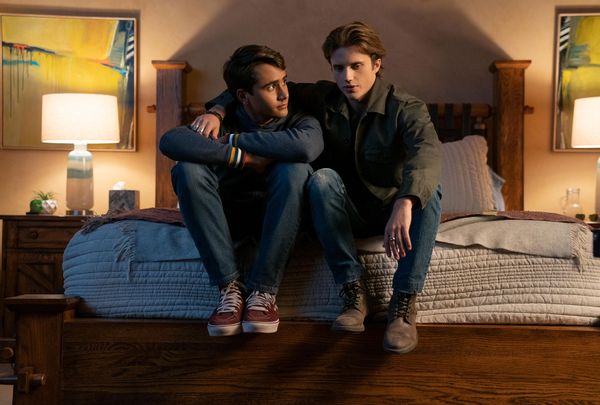 Michael Cimino as Victor and George Sear as Benji in "Love Victor" (Hulu)A spin-off of the film "Love, Simon," based on a YA novel by Becky Albertalli, the Hulu series follows a young teen named Victor (Michael Cimino) as he starts a new high school and comes out, finding friends, love interests and all the confusion, joy and hardships of growing up.

Like "Heartstopper," the show is sweet but not saccharine, positive but not unrealistic, and it centers a child of color. Despite a wildly positive response — in their review, Paste Magazine said about the show: "What more could you want in a half-hour series?"— the series was canceled after only three seasons, with its bittersweet final season debuting in June. Them wrote the cancellation was "distressing proof that nothing pure lasts forever." Newsweek theorized that the show was canceled "for the reason many high school dramas are ended: Because the show has run out of high school."

Not so with "The Baby-Sitters Club." 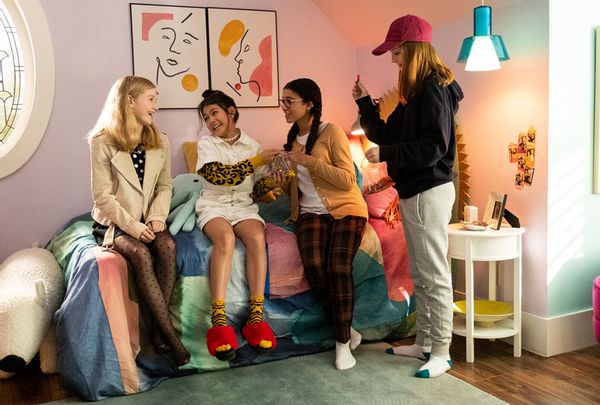 We need love-positive shows too.

The Netflix series, based on the children's books (ones I actually read as a child) by Ann M. Martin, was canceled after only two seasons. Again, the show received a positive critical reception, audiences loved it — yet another 100% Rotten Tomatoes score.

Following a group of middle school friends who decide to form a babysitting business, "The Baby-Sitters Club" is noted for having a young trans child as a recurring character: Bailey, played by trans actor Kai Shappley. As Alive wrote, it was refreshing to see the show come to the screen "as queer-friendly as Ann M. Martin must have wished it always could have been." Martin is openly gay. 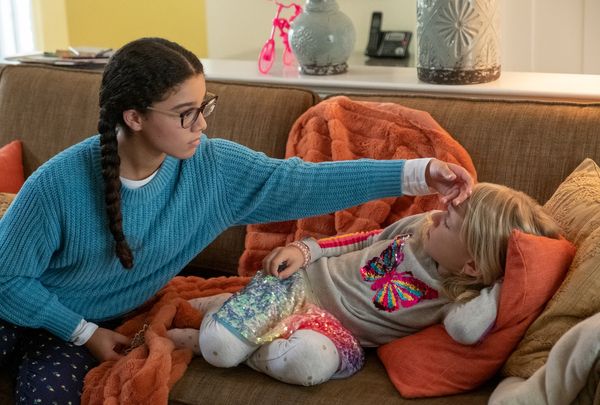 Malia Baker as Mary Anne Spier and Kai Shappley as Bailey Delvecchio in "The Baby-Sitters Club" (Kailey Schwerin/Netflix)The babysitters accepted and defended their trans charge, as they defended all of their young charges, and Bailey's story was simply one of many, a plot tapestry that may have included some queer babysitters too, like Dawn who said she disliked labels and could date anyone (as the show is canceled, we'll never know now). We need stories of lots of types of queer kids, not just their parents.

We need stories with happy endings.

Importantly, "Heartstopper" has more than simply one gay character — in so many shows, the gay character is a mere supporting character who is the "best friend," and the only one: their own story relegated to the sidelines while they cheer on the straight hero.

That's not what friend groups often look like, and that's not the friend group on the Netflix show, where multiple characters, including kids of color, are gay, bi, or trans.

We also need shows about love that are not about sex. We need them because kids younger than high schoolers want and need to watch them. I love "Sex Education" and its sex-positive, inclusive message, but it is definitely not yet appropriate for my kid. We need love-positive shows too.

Though focused on slightly older kids than "Heartstopper," "Love, Victor" was, as Them wrote, "pure," perfectly fine to watch with your tweens. The high school storylines were not without their drama, of course, but the tensions of the show, like Victor coming out, dealing with his family and trying to decide who to be with romantically, generated healthy discussion. And it generated hope.

We need stories with happy endings. So many queer stories still fall into the trap of "bury your gays." That's not a message kids need to hear, a cliched trope where the queer character is more likely to die than the straight ones, especially if they have finally found love or happiness. Not so with "The Baby-Sitters Club," "Love, Victor," "Julie and the Phantoms," the "Saved by the Bell" reboot and "Heartstopper." But "Heartstopper" is the only show standing.