Inequality is literally killing us: The most unequal societies suffer most in public health metrics

Income inequality has soared with the pandemic, providing incriminating evidence that it kills 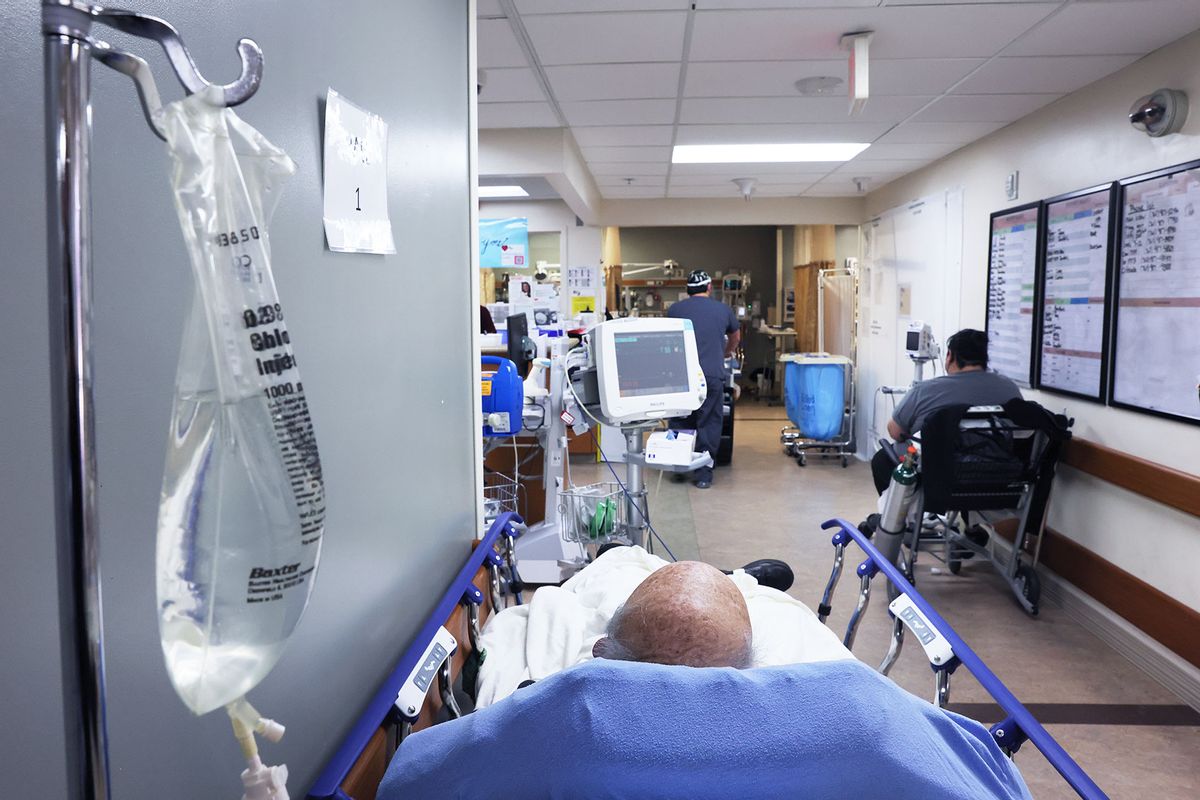 Adapted from "Inequality Kills Us All: Covid-19’s Health Lessons for the World," by Stephen Bezruchka, M.D., M.P.H.

In 1992, a publication appeared in the British Medical Journal written by Richard Wilkinson, featuring a simple graph of life expectancy in 1981 among nine rich nations, along with the percentage of income received by the poorest 70% of families for each country. It showed how greater inequality in a country was associated with lower life expectancy, with only a weak link between national incomes and mortality rates. Richer countries were not necessarily healthier than less rich ones, at least among developed nations. Increases in income inequality over time were linked to higher death rates. But were the results valid?

Depending on a single study as definitive evidence is a shaky way to stake a claim. Knowledge progresses by conjectures, critical commentary, discussions, and either general acceptance or rejection. Yet five previous studies, beginning in 1979, demonstrate similar findings. In 1996, two studies from University of California and Harvard reported the same finding within the United States: more unequal states had higher mortality. Later research showed the same result for large U.S. cities.

Even a small rise in inequality gives rise to a substantial increase in COVID-19 deaths.

That same year, a landmark book, "Unhealthy Societies: The Afflictions of Inequality," by Wilkinson appeared, which expounded on these concepts. My own heavily annotated copy reflects the importance of this book as a huge step toward recognizing the effect of the social environment on health, while more recently, COVID-19 has highlighted the critical role social policies play in human survival. Similar studies link U.S. state and county death rates associated with COVID-19 with income inequality. The first paper found that more unequal states had higher COVID-19 death rates. In June 2021, a study showed U.S. counties with higher income inequality had higher rates of COVID cases and deaths.

While the British media, with a July 2021 article in The Economist, pinpointed these studies, the U.S. media has mostly been silent. One subsequent study of 84 countries found more COVID-19 deaths associated with increasing economic inequality. Even a small rise in inequality gives rise to a substantial increase in COVID-19 deaths.

Income inequality has soared with the pandemic providing other incriminating evidence that it kills. Still, correlation doesn't imply causation. How do we know that something causes something else?

The U.S. Surgeon General's 1964 report, Smoking and Health, outlined the criteria for inferring that something, in this case, cigarettes, caused something, in this case, worse health. The criteria were straightforward. First, there had to be many studies demonstrating the relationship, by different investigators, on different populations, over different time periods. Then the chicken and egg problem had to be addressed: did people start smoking and then their health worsened, or was it the other way around—their health got worse so they started smoking? Third, were there other better explanations for the association? Finally, was there some type of biological plausibility, namely, a mechanism through which smoking produced worse health?

By 1964, we had conclusive evidence that all these conditions were met for tobacco as damaging to health. Today, using the same criteria, we can state that inequality in a population causes worse health.

Demonstrating the association between more economic inequality and worse health depends on multiple factors. One needs a threshold of income inequality—it must be greater than a certain magnitude before the relationship is observed. For relatively equal nations, the health effects aren't apparent. There may be a lag between increases in income inequality and associated health outcomes. For small geographic groups, a small neighborhood, for example, people tend to live among others like themselves, so it would be unlikely that inequality and health would be associated there. Nevertheless, science shows that inequality is bad for health.

Billionaires "had a terrific pandemic" — as inequality killed millions

Richard Wilkinson had nudged the inequality-health field into academic prominence after his 1992 paper. Working with Kate Pickett, in 2009 they wrote, "The Spirit Level: Why Greater Equality Makes Societies Stronger"—a popular book linking a variety of health and social problems to income inequality among 23 rich nations, in which they lay out the evidence that inequality kills. They found that the United States had the most income inequality and the worst outcomes for the index. This seminal book has been translated into many languages and has sold close to a million copies.

We are heading in the direction of even more concentrated political power, while the rest of us are facing an epidemic of disempowerment.

In their book "Social Inequality," Professors Ichiro Kawachi and S.V. Subramanian of Harvard University address the income inequality health question by presenting three key arguments. First there are "diminishing returns" to health with increasing income. Inequality's second impact is through its psychosocial effects, showing that inequality causes stress and frustration leading to worse health. Third, there is a contextual effect of inequality. The rich increasingly control the political process and enjoy policies that benefit them, at the expense of every- one else. Let's explore.

Richer people have better health, as measured by mortality rates, than poorer people. However, adding an additional ten thousand dollars, say, to the income of a very rich person does little or nothing to improve their health, while adding that amount to a poor person's income has substantial health benefits. Such a relationship is observed in nearly all societies.

Their second link is the psychosocial stress produced by inequality. People may have enough resources to provide for basic needs, which typically include food, water, shelter, and security, but may not have enough to support the more lavish lifestyle that they see others enjoying. With a large income and wealth gap, they recognize what they don't have and compete for higher status. Such an unequal society engenders stress and frustration. We recognize the need to "be nice" to our superiors if we are to keep our job or look good in society.

Status anxiety, the inevitable outcome of income inequality, is found at all levels of income. The very rich often don't want to talk about their wealth. In her book "Uneasy Street: The Anxieties of Affluence," Rachel Sherman finds that many of the rich don't admit to being more than middle-class, despite having several homes and other trappings of wealth. Though objectively very wealthy, they think of those who have even more than they do as "affluent."

There is less status anxiety where there are smaller income gaps. One study asked respondents to agree or disagree with the statement, "Some people look down on me because of my job situation or income." Those in more unequal societies were found to have greater status anxiety at any income level than people in places with less inequality.

Inequality also leads to self-medicating with drugs. Three quarters of the world's opioid consumption takes place in the United States, where we have the highest rates of use. Opioid overdose death rates here have risen markedly since 1994, in contrast to those in other rich countries. Might the high use of opioids here reflect the increasing inequality and status anxiety? Studies show common forms of drug use, including opioids, cocaine, amphetamines, cannabis, and ecstasy, are higher in more unequal countries and more drug deaths occur in more unequal U.S. states.

The Contextual Effect of Inequality: The Rich Control Politics

With a large income gap, the well-off pull away from the rest of society. Call it the secession of the rich. Consider the lifestyles of those on top of the unequal wealth distribution, the so-called one percent. They are actually the 0.1 or 0.01%. They live in gated communities, send their children to private schools, and have staff to clean their homes, do the gardening, and prepare meals. They enjoy private security services and receive concierge medical care from doctors and other service personnel who are at their beck and call. Since they pay for these benefits with their high incomes, they don't see a need to support others who have considerably less. They often say, "We worked hard so that we can pay for these benefits ourselves why should we help others who didn't?" They essentially secede from the rest of society.

Most rich argue for less government intervention, less regulation, lower taxes, and letting the so-called free market dictate how society fares. While the rest of us work for wages or salaries, the rich get most of their income from what economists call rents or unearned income, for example, through investments in property or stocks—thus from means other than showing up at work.

We are heading in the direction of even more concentrated political power, while the rest of us are facing an epidemic of disempowerment. Government funding for education decreases, the quality of public schools declines, and college students have to assume massive debt for an undergraduate degree. Public transportation and other social services are weakened. The deterioration in highway, bridge, and transportation systems, especially compared to other rich nations, shows the decline of infrastructure here. Stories of U.S. bridges and apartment buildings collapsing due to delayed maintenance or not heeding or delaying acting upon structural engineering reports are another example of the contextual effect of inequality. Access to healthcare is considered a privilege, not a fundamental human right as it is in many other nations. As the poor become disempowered and the wealthy gain power, societal relationships overall become less healthy.

Providing healthcare to all is necessary, but it is only the first step. We will only achieve a truly healthy society when by redistributing a little from the rich to the poor. In an era of staggering inequality, we can easily afford it.

about inequality and health

Stephen Bezruchka, M.D., M.P.H. is Associate Teaching Professor Emeritus in the Departments of Health Systems & Population Health and of Global Health at the School of Public Health, University of Washington. He is the author of "Inequality Kills Us All: Covid-19’s Health Lessons for the World."