House Democrats "pass the torch": But Hakeem Jeffries is no upgrade on Nancy Pelosi

Incoming Democratic leader is 30 years younger than Nancy Pelosi. But in style and substance, he's the old guard 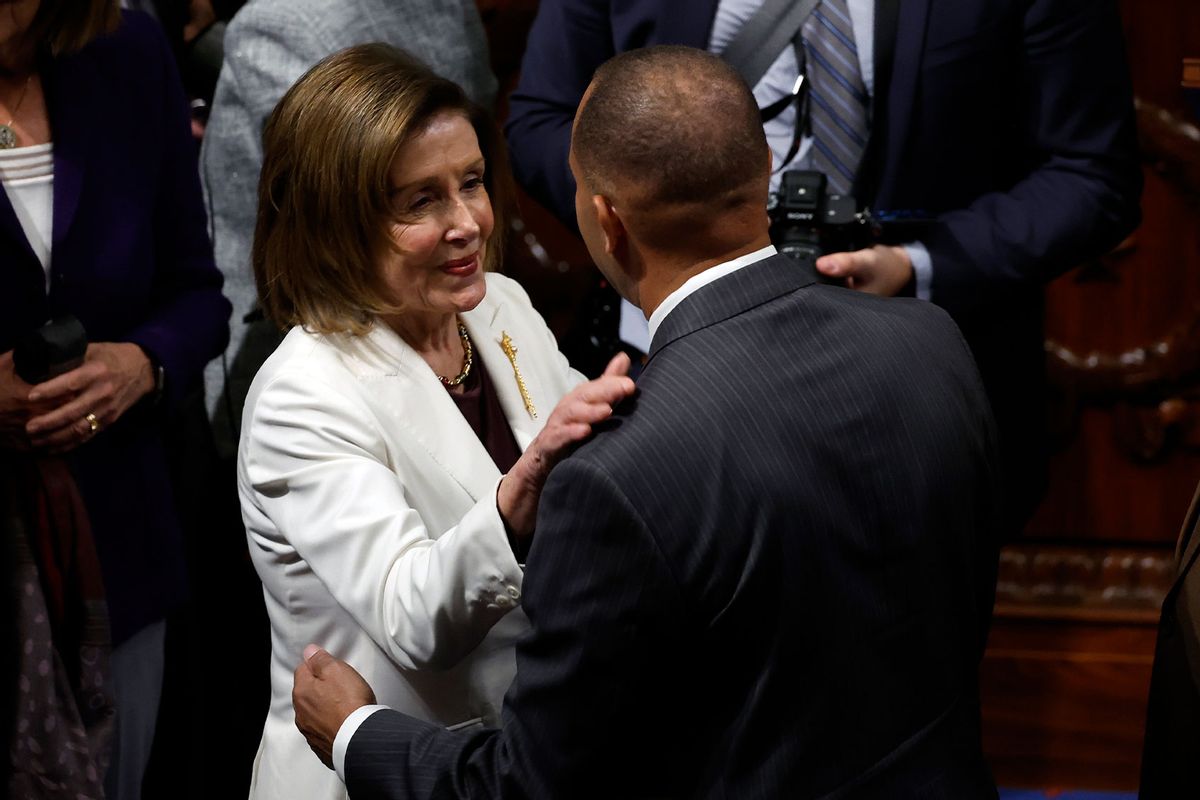 Images of passing the torch can be stirring.

John F. Kennedy reached heights of inaugural oratory in 1961 when he declared that "the torch has been passed to a new generation of Americans." Three decades later, when Bill Clinton won the presidency, a Newsweek headline proclaimed "THE TORCH PASSES." The article underneath glorified "a film clip that made its way into a widely seen campaign ad: a beaming, 16-year-old Bill Clinton on a sun-drenched White House lawn, shaking the hand of his and his generation's idol, John F. Kennedy."

Weeks later, when Time magazine named Clinton "Man of the Year," its cover story carried the headline "THE TORCH IS PASSED."

Now, the top of the Democratic Party is passing torches on Capitol Hill. When outgoing Speaker Nancy Pelosi announced two weeks ago that she would step back from the leadership of House Democrats, she said: "The hour has come for a new generation to lead." But in what direction?

Nancy Pelosi's historic run as speaker comes with a lesson: Quit while you're ahead

Pelosi quickly endorsed Rep. Hakeem Jeffries of New York to replace her as leader. NBC News offered the common media frame: "Pelosi made history as the first female speaker of the House, while Jeffries, the current Democratic Caucus chairman, would become the first Black leader of a congressional caucus and highest-ranking Black lawmaker on Capitol Hill."

You can count on much of the mass media to shower the 52-year-old Jeffries with accolades, largely supplied by fellow Democrats. But a closer look reveals a problematic record.

Early on, before becoming a New York state legislator, Jeffries worked for years as a corporate lawyer. In Congress, while he has taken a few progressive positions like co-sponsoring Medicare for All and voting to cut 10 percent of the military budget, his emphasis has been in sync with the party establishment.

"I'm a Black progressive Democrat concerned with addressing racial and social and economic injustice with the fierce urgency of now," Jeffries told the Atlantic in August 2021. But during the same interview, Jeffries added: "There will never be a moment where I bend the knee to hard-left democratic socialism." (Ironically, Jeffries was echoing the "fierce urgency of now" phrase from Martin Luther King Jr., who was a democratic socialist.)

Jeffries likes to jab leftward. In 2016, he called Sen. Bernie Sanders a "gun-loving socialist with zero foreign-policy experience." A 2018 profile in The Economist — headlined "High Hopes for Hakeem Jeffries" — concluded that he "is nearly as moderate as a safe-seat Democrat gets." The article pointed out: "Though he supports the principle of universal healthcare coverage, he speaks of 'the importance of market forces and getting things done in a responsible fashion.' Quoting Ronald Reagan approvingly, he suggests this means promoting a flourishing private sector outside the 'legitimate functions' of government."

During the 2022 election cycle, Jeffries helped form the Team Blue PAC, whose main priority is to help Democratic incumbents defeat Squad-like primary challenges from the left.

Jeffries takes umbrage at negative press portrayals to such an extent that his office tries to quash critical assessments. When I wrote in a HuffPost piece in January 2019 that "Jeffries has been more attentive to serving corporate power than the interests of voters in his Brooklyn district," the response was swift and angry. Jeffries' communications director and senior adviser at the time, Michael Hardaway, fired off emails to HuffPost, claiming that my characterization was "factually inaccurate and easily disproven." Despite the escalating fulminations, the HuffPost editor explained that he saw "no reason to correct or update the piece."

Jeffries has not been a sponsor of the Green New Deal (which Pelosi famously denigrated in 2019: "The green dream or whatever they call it, nobody knows what it is, but they're for it, right?"). He also has not co-sponsored the Green New Deal for Cities Act.

During the latest election cycle, Jeffries joined forces with one of the most corporate and vitriolic anti-progressive Democrats in the House, Rep. Josh Gottheimer of New Jersey, to form Team Blue PAC. Its priority — to protect the party's incumbents against Squad-like primary challengers from the left — was summed up last winter in a Rolling Stone headline over an article about Jeffries' initiative: "Top House Democrat Unveils Plan to Beat Back Progressive Rebellion."

Last year, The American Prospect reported, Jeffries was conspicuously absent from efforts to support public housing in his home city: "When all [other] New York City House Democrats sent a letter to Pelosi urging her to protect all $80 billion for public housing in the BBB [Build Back Better bill], Jeffries was the only member not to sign that missive, especially surprising given that New York Dems are known to act as a bloc."

Jeffries is a member of the Congressional Progressive Caucus, the magazine noted, but that affiliation should not be taken at face value: "Jeffries is a mute member of the CPC, the largest caucus in the party, but has recently chosen to ally himself with its more conservative factions. And while the party's moderate wing has moved left on everything from foreign policy to social welfare, Jeffries has not moved with it."

In fact, Hakeem Jeffries is thoroughly corporate, As The Intercept reported four years ago, after he won a close race against Rep. Barbara Lee to become chair of the House Democratic Caucus, "Jeffries is heavily backed by big money and corporate PACs. Less than 2 percent of his fundraising comes from small donors, who contribute less than $200, according to Federal Election Commission records."

While in his fourth term, "Jeffries was the leading congressional recipient of hedge fund money in 2020," The American Prospect reported last year:

He banked $1.1 million from the financial sector, real estate interests, and insurance industry in the 2019–2020 cycle. Everyone from JPMorgan Chase to Goldman Sachs to Blackstone contributed. Zimmer Partners, a hedge fund, is one of Jeffries's top donors in 2021. From the outset, he has governed with those interests at heart. While Democrats were reconsidering their coziness with Wall Street, he broke ranks to vote with the financial services world, including on a high-profile measure literally written by Citigroup lobbyists in 2013 that killed the Dodd-Frank "swaps push-out" rule, allowing banks to engage in risky trades backed by a potential taxpayer-funded bailout.

Thirty years younger than the outgoing speaker, Jeffries is a fitting symbol of the media's eagerness to herald generational change for Democrats in Congress. But investigative journalist Alexander Sammon has provided an apt summary: "Barely in his fifties, Jeffries is young numerically, but aligned with an older mode of Democratic politics, and has repeatedly distanced himself from the younger crop of Democrats that is almost categorically more progressive (and more popular). He's made a reputation for himself as the party's future by becoming a foremost representative of its past."

When a torch passes, we might be glad to "meet the new boss." But we should discard illusions. That way, hopefully, we don't get fooled again.

on the Democrats after the midterms