Nancy Pelosi's historic run as speaker comes with a lesson: Quit while you're ahead

If Pelosi had put down the gavel a few years ago, her legacy as the greatest of all time would go unquestioned 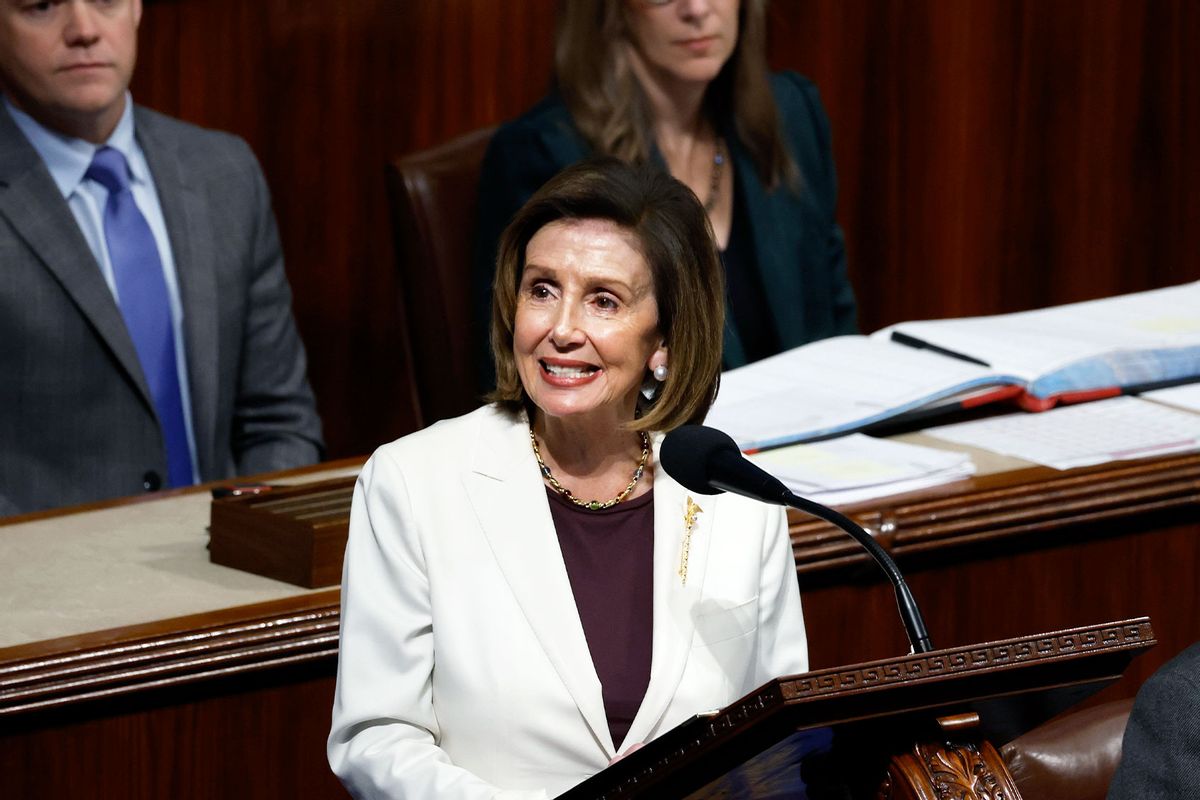 U.S. Speaker of the House Nancy Pelosi (D-CA) delivers remarks from the House Chambers of the U.S. Capitol Building on November 17, 2022 in Washington, DC. Pelosi spoke on her future in the House of Representatives and said she will not seek a leadership role in the upcoming Congress. (Anna Moneymaker/Getty Images)
--

Both political junkies and students of history can agree: When it comes to the long line of speakers of the House of Representatives, Rep. Nancy Pelosi, who resigned her position in the Democratic Party's congressional leadership this month, will be remembered as the GOAT (Greatest of All Time). The 82-year-old Democrat from San Francisco was never a flashy politician and certainly wasn't an inspiring figure like former President Barack Obama. Still, in all the ways that counted, she was likely the most effective person to ever hold her position, both in terms of managing an unruly caucus and being able to push her party in more progressive directions.

"History will note she is the most consequential Speaker of the House of Representatives in our history," President Joe Biden said in a statement honoring the first female speaker. In stepping down after her long tenure as Democratic House leader, both as speaker and in opposition, Pelosi is clearing the way for a younger generation to assume the mantle of leadership.

Former Obama speechwriter and current podcast host Jon Lovett dug into more detail in his comedy show last weekend, arguing that during the Obama years alone, Pelosi had "passed the Recovery Act, Dodd-Frank, the end of 'don't ask don't tell,' and the Affordable Care Act." Even more importantly, Lovett said, she was "someone who made sure the House she led was not the limiting factor in how progressive [Democratic] policies would be." Even when progressive bills couldn't get through the Senate, she would pass them anyway just to advance the conversation, even if doing so irritated some of the more conservative members of her caucus.

Indeed, as Lovett pointed out, the passing of the Affordable Care Act was as close to a miracle as you'll ever see in politics. That bill had been in the final stages when Sen. Ted Kennedy died and was replaced with a sub-replacement-level Republican named Scott Brown. (Who is now in a much more suitable position as a high school basketball coach.) Kennedy had devoted his political career to passing universal health care, but with his death that bill seemingly went up in smoke, as he had been the 60th vote necessary to get past a Republican filibuster.

It was Nancy Pelosi, through sheer political talent and grit, who saved the whole damn thing. As Amy Davidson Sorkin of the New Yorker recounts, it took "a feat of high-risk legislative acrobatics: get the House to pass a Senate bill that many representatives already thought was unacceptable, and then pass certain fixes through the arcane process of 'reconciliation.'" By any measure, it should have been an impossible task. But Pelosi pulled it off even though, as Obama recounted later, she was furious at the Senate Democrats she saw as "cowardly, shortsighted and generally incompetent."

(Her view of Senate Democrats seems largely unchanged, at least as far as we can tell from the way Pelosi spoke to Sen, Chuck Schumer, then the minority leader, during the Jan. 6 insurrection.)

Why did single women vote for Democrats? Republicans have an asinine theory

Pelosi is both the most effective and most progressive House speaker of all time. She even voted against the Iraq War when most Democrats were too afraid of being cast as pro-terrorist to resist George W. Bush's disastrous Middle East adventure. Yet nowadays she's mostly spoken of in progressive circles as if she were an embarrassing stain on their shirts. Even when one offers praise of Pelosi in that environment, it is customary to offer the reflexive caveat that one is "no fan" of hers. This expectation was particularly unnerving in the days after a right-wing conspiracy theorist literally broke into her house and attacked her husband. So many on the left felt the need to throat-clear about how they didn't much like her before opining that she and her family members should not be murdered.

Nancy Pelosi is both the most effective and most progressive House speaker of all time. So why do progressives have to talk about her with a bunch of reflexive caveats?

A lot of what drives this knee-jerk impulse to crap on Pelosi flows from the Twitterized degradation of political discourse: Amplifying the flaws of others in order to make yourself look perfect. The elevation of aesthetics over substance is what leads people to judge Pelosi as "cringe" because she is too old to care that U2 isn't cool. (What should be "cringe" is worrying about whether elderly politicians are sufficiently cool.)  And, of course, there's sexism, which manifests on the left largely as the view that female leaders are either perfect or are absolute trash.

But there is one sense in which the ugliness toward Pelosi and overly harsh judgments of her career have a basis in reality: She hung in there for way too long. Like far too many others in Democratic leadership positions, Pelosi let her politician-sized ego tell her that she was indispensable, justifying a desire to hang onto power rather than graciously giving way to the next generation. To be fair, unlike a lot of other geezers who won't let go — from 81-year-old Sen. Bernie Sanders to Biden, who just turned 80 this past weekend — Pelosi had a record of historic success to feed her sense of being irreplaceable.

Unfortunately, there are good reasons to look at Pelosi's past few years and argue that the time in which she was a forward-thinking leader has passed, and that someone younger would have been better at recreating the spark she had in the Obama years. Despite her gloriously uncensored contempt for Donald Trump, her leadership during his presidency suggested Pelosi had evolved into a far more timid and cautious politician than ever before. She created unnecessary rifts with some of the most interesting and progressive young members of her caucus, including Rep. Alexandria Ocasio-Cortez of New York. In the latter part of her career, Pelosi was running well behind where the voters were, when she used to be someone who led the way.

The Dobbs effect is real: Voters, still angry about the Roe overturn, turned out to protect abortion

That was especially evident in her reluctance to use the oversight powers of the House to constrain Trump. She dragged her feet on impeachment, despite Trump's repeated and flagrant criminality, until the Ukraine extortion scandal forced her hand. And while she pushed the second impeachment through after Jan. 6 in an urgent and timely manner, her desire to put a "bipartisan" gloss on the congressional investigation of that insurrection ended up wasting valuable months. Now the Jan. 6 committee is racing the clock to get criminal referrals to the Justice Department, and will end up doing much less than it could have to hold Trump legally accountable.

A slowed-down Pelosi is still a more effective leader than Chuck Schumer, who stood by helplessly while Joe Manchin and Kyrsten Sinema tore up most of Joe Biden's agenda.

Still, if Nancy Pelosi lost a step in recent years, that still makes her a far more effective leader than most on Capitol Hill. Schumer spent most of the past two years standing by helplessly while two recalcitrant Democrats, Joe Manchin of West Virginia and Kyrsten Sinema of Arizona, tore up the vast majority of Biden's agenda. He couldn't even get basic bills to protect reproductive rights and voting rights past the filibuster shredder. But in the House, Pelosi's talent at holding her diverse coalition together continued to be a marvel. The full $2 trillion Build Back Better bill, a bill codifying abortion rights, the voting rights bill: The House passed all, often with total or near-unanimous Democratic support.

Even in stepping down from leadership, Pelosi's skill at herding cats is evident. There had been questions about whether 83-year-old Majority Leader Steny Hoyer or 82-year-old Majority Whip Jim Clyburn would try to take her place but those two octogenarians have been persuaded to join their leader in stepping aside for the next generation. Her leadership on that transition is even fueling questions about whether Joe Biden can be convinced to do the same.

The moral of this story is simple: The best way to preserve your legacy is to follow casino best practices, and get out while you're ahead. In the long run, Pelosi probably will be remembered as she should be, as a towering leader and genuine progressive who often pulled off the impossible. But her stubbornness in hanging onto power just a little too long has unquestionably tarnished that legacy. That's especially true in an era where people have goldfish-length memories and your reputation is only as good as the last time someone griped about your imperfections on Twitter.

But hey, we're apparently about to bear witness to Speaker of the House Kevin McCarthy, which ought to be as good a reminder as anyone could want of how much better we were off with Nancy Pelosi, past her prime or not.