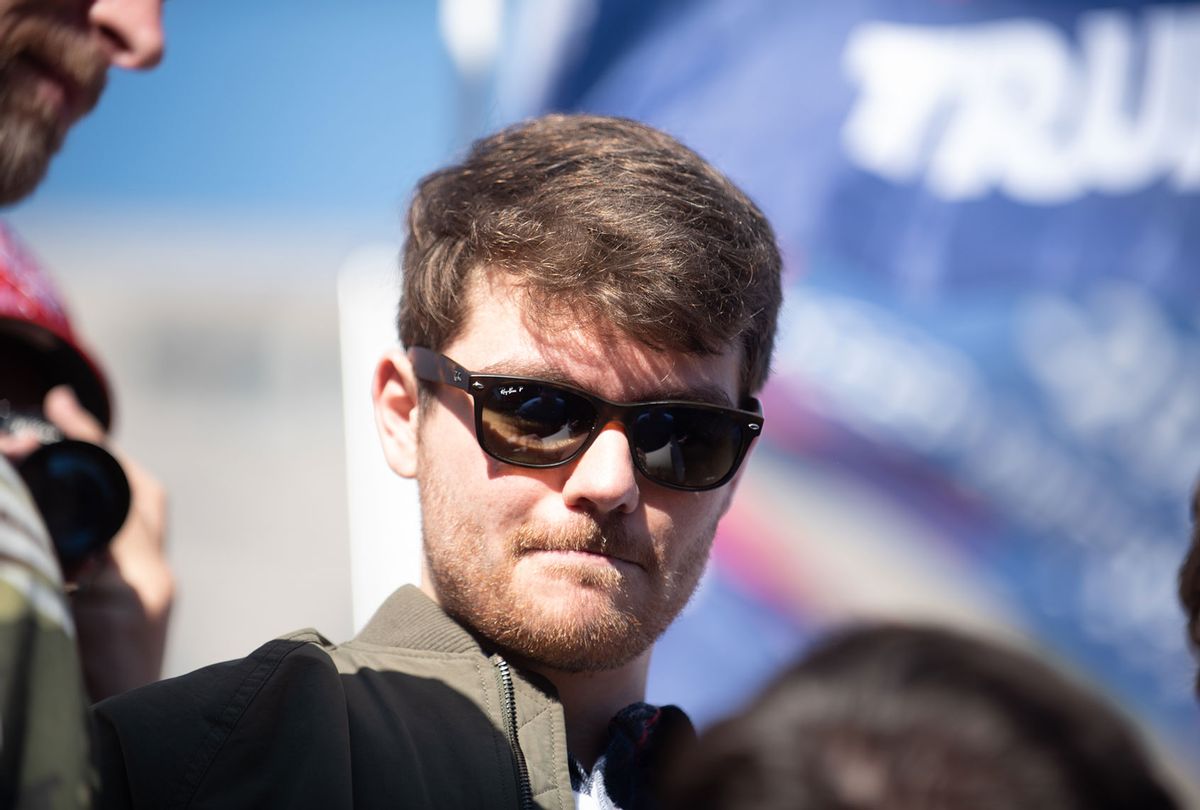 Earlier this year, Nick Fuentes, the young leader of the virulently white nationalist, antisemitic and misogynist America First/"groyper" movement, announced during an obscure livestream that his "legacy is going to be, basically, Hitler 2, 3 and 4 in America." It was just one among thousands of intentionally inflammatory comments Fuentes has made over the years, including vulgar jokes denying the Holocaust, gleeful use of the n-word, calls to burn women alive, and more. Yet none of that was enough to stop Donald Trump from welcoming Fuentes to his Mar-a-Lago residence for dinner late last week, alongside apparent 2024 presidential candidate Ye (formerly Kanye West) and Ye's new campaign director, disgraced alt-lite star Milo Yiannopoulos.

Since the dinner, examples of Fuentes' vile comments have proliferated online, particularly his abundant antisemitic and Holocaust-denying statements. In one recent livestream, Fuentes warned: "When it comes to the Jews, here's the silver lining: it tends to go from zero to 60," and so therefore, "The Jews had better start being nice to people like us, because what comes out of this is going to be a lot uglier and a lot worse for them than anything that's being said on this show." In another, he said that Jews could be allowed to live in the "Christian country" that is America, "but they can't make our laws." In October, he told Jews to "get the fuck out of America," charging that they "serve the devil" and are "an antichrist."

Last February, when Fuentes presided over the third meeting of his America First Political Action Conference (AFPAC) in Florida, he praised Vladimir Putin's invasion of Ukraine, praised the founder of the white supremacist group American Renaissance, and to top it off, praised Adolf Hitler himself.

In the aftermath of the dinner, Trump has tried to cautiously downplay the meeting, posting on his platform Truth Social that he didn't know who Fuentes was. Other Republicans have been equally tight-lipped. As Axios reported Monday, nearly two dozen Republican legislators asked to respond to the news declined to comment, and those lawmakers who did weigh in did so by equivocating, suggesting, for instance, that Trump needed to exercise "better judgment in who he dines with," as Kentucky Rep. James Comer said. Right-wing commentator Candace Owens, an ally of Ye's, posted on Twitter on Friday that she'd played no role in connecting him with Yiannopoulos or Fuentes, but took care to note that didn't mean she was taking "a personal shot at either of them."

This is hardly the first time that Fuentes has rubbed elbows with prominent Republicans. Over the last few years, Fuentes' AFPAC gathering has drawn a number of GOP leaders, and this year that number was higher than ever before. Marjorie Taylor Greene, R-Ga., served as the surprise guest. Rep. Paul Gosar, R-Ariz., who had addressed AFPAC before, spoke to the gathering this year by video. Appearances were also made by former Iowa Rep. Steve King, Idaho Lt. Gov. Janice McGeachin, Arizona state Sen. Wendy Rogers, former Maricopa County Sheriff Joe Arpaio and others. In the post-conference controversy, Rep. Matt Gaetz, R-Fla., waded into the fray to defend Fuentes, describing the outspoken Holocaust denier and white nationalist as a "charismatic internet personality" who might be an ethno-nationalist but also had some "well-informed and thought-provoking" perspectives.

Fuentes' movement has also made other inroads, as Salon has previously reported. Last year, failed Texas Republican gubernatorial candidate Don Huffines hired a staffer from the groyper orbit. This spring, a Salon investigation revealed that the Catholic right media outlet Church Militant — which has also had close ties to Yiannopoulos — was working  to recruit Fuentes' followers into its youth-focused activist arm, and that multiple Church Militant staffers had connections to the movement.

On Monday, in response to the controversy, Church Militant posted a statement on Twitter about Yiannopoulos, writing that "Milo has never been an employee" but that instead the outlet's relationship with him had "been of a spiritual/theological nature — helping him abandon a sinful life and return to his Catholic Faith." (In fact, Yiannopoulos wrote multiple pieces for the outlet, hawked its merchandise on Church Militant shopping shows and emceed a high-profile protest rally the outlet held in late 2021 to protest the church's leadership.) They had "no comment" on his return to political activism.

For Fuentes, the current controversy seems less like a setback than like the elevation of his hateful movement to its highest standing yet. Since the dinner, Fuentes and his allies have hinted that he is joining Ye's presidential campaign, perhaps as communications director. On Friday, Ye posted a short video clip of himself delivering the traditional opening line for Fuentes' show. The same night, Yiannopoulos posted a message during Fuentes' show suggesting that Fuentes would begin working on the campaign this week.

Marjorie Taylor Greene and Milo Yiannopoulos: A match made in troll heaven

Jan. 6 organizer Ali Alexander — who also posted claims that Fuentes is joining Ye's campaign — has spent the last five days publishing a string of defenses of Fuentes on Telegram: He called Fuentes a friend, urged right-wingers who don't like Fuentes to "just remain silent," and called on groypers to help correct the "optics" around Fuentes by spamming Twitter with a video arguing that Fuentes is not, in fact, a racist.

In a livestream on Saturday, Alexander also defended Fuentes against charges of hate speech and antisemitism by adding some of his own — talking about the "fundamental disunity" between a "culture that is predominantly Anglo-Saxon in tradition and the Jewish people," and saying, "Ye is completely enamored with Nick because Nick is very talented at articulating what I think is the third way in dealing with the challenges that Christendom faces with Jewish power."

Alexander also used the livestream to issue a surprisingly curt warning to Trump: "I need the former president to know that his Truth post was inappropriate, it was unbecoming and I'm not going to allow it, frankly," Alexander said, referring to a post in which Trump referred to Ye as a "seriously troubled man, who just happens to be black." Alexander continued, "You gotta watch your mouth when you're talking about my Christian brothers in an un-Christian way."

"Ye is completely enamored with Nick [Fuentes] because Nick is very talented at articulating ... the third way in dealing with the challenges that Christendom faces with Jewish power."

Continuing on to argue that the Mar-a-Lago dinner served as a reminder to Trump not to neglect his white base, Alexander continued, "Trump's got to choose: Which way, Western man? Which way? Are you going to try to do a toned-down, subdued announcement so you can run acceptable to Rupert Murdoch, or are we going to bend Fox News, bend Newsmax, bend [The] Post Millennial, bend Steve Bannon into realizing that this party is permanently the America First party?"

That seeming ultimatum resonated with the observations of other commentators, who noted that the entire story of the Trump-Fuentes dinner points to a larger shift on the right: A growing sense that the Trump coalition or movement of 2016 is gone, but that Trumpism as a movement should continue not only to survive, but push the party further rightward.

In two (since-deleted) posts on the far-right social media website Gab, founder and CEO Andrew Torba — himself a noted antisemite — declared, "2016 Trump is never coming back…The goal now is to shift the Overton Window further right, like 2016 Trump did. That won't happen with 2022 Trump, but it could continue to happen with Ye. We need to shift all of our memetic energy for the 24 primaries to Ye if he announces a run."

In another post, which Yiannopoulos subsequently shared on Telegram, Torba wrote, "Nick and Ye didn't discredit Trump's 2024 campaign with that dinner meeting. Trump did that himself by having the most boring low energy announcement speech in history. He did so by continuing to suck the boots of the Jewish powers that be who hate Jesus Christ, hate our country, and see us all as disposable cattle according to their 'holy' book. Trump WILL start putting Jesus Christ first in His campaign messaging or he WILL be left in the dust of someone who does. It's that simple. We're done putting Jewish interests first."

Andrew Torba of Gab accused Trump of "continuing to suck the boots of the Jewish powers that be who hate Jesus Christ, hate our country, and see us all as disposable cattle according to their 'holy' book."

On Telegram, the official Gab.com account has leaned heavily into explicit antisemitism since the dinner.on Monday. In one post on Monday, Torba wrote, "It really is this simple. We will destroy the GOP before we allow another Zionist bootlicker to 'represent us.'" In another, Torba forwarded a post from notorious antisemitic Catholic traditionalist E. Michael Jones, which read, "If Trump can't stand up to the Jews, there is no point in voting for him."

As Kris Goldsmith of Veterans Fighting Fascism put it on Twitter, "after that [Mar-a-Lago] dinner, Trump recognizes that if he doesn't show the neo-nazi part of his base a bigger platform, they'll leave him.

Ben Lorber, a research analyst at Political Research Associates who has tracked Fuentes and his groyper movement for three years, noted that Ye's presidential campaign, should it last, likely wouldn't have the traditional goal of winning or even necessarily getting the candidate on the ballot. Rather, he continued, it could serve as a new platform for a provocateur who has always described his ultimate goal as pulling the conservative movement as far right as possible — "kicking and screaming…into a truly reactionary party."

"Fuentes can use Ye as a platform to add open, explicit antisemitism into the Right's already toxic brew of Soros, 'groomer,' anti-globalist, cultural Marxist & other 'implicit' antisemitic conspiracy discourse — with the scaffolding of Christian nationalism," Lorber wrote on Twitter. "Conservative leaders can watch closely, see which interventions gain traction & adopt them for their own use."

In that context, Yiannopoulos gave voice to a sense of excitement on the far right around Ye's candidacy, writing on Friday: "It's real. Everything you are feeling is real. It's 2015 again and the best is yet to come."

about Republicans and the far right

Kathryn Joyce was an investigative reporter at Salon, and the author of two books: "The Child Catchers: Rescue, Trafficking and the New Gospel of Adoption" and "Quiverfull: Inside the Christian Patriarchy Movement."