A nation of attention junkies: Trump and Elon are the perfect symbols of America's predicament

We can't give Musk and Trump the attention they crave (because it's literally impossible). We also can't look away 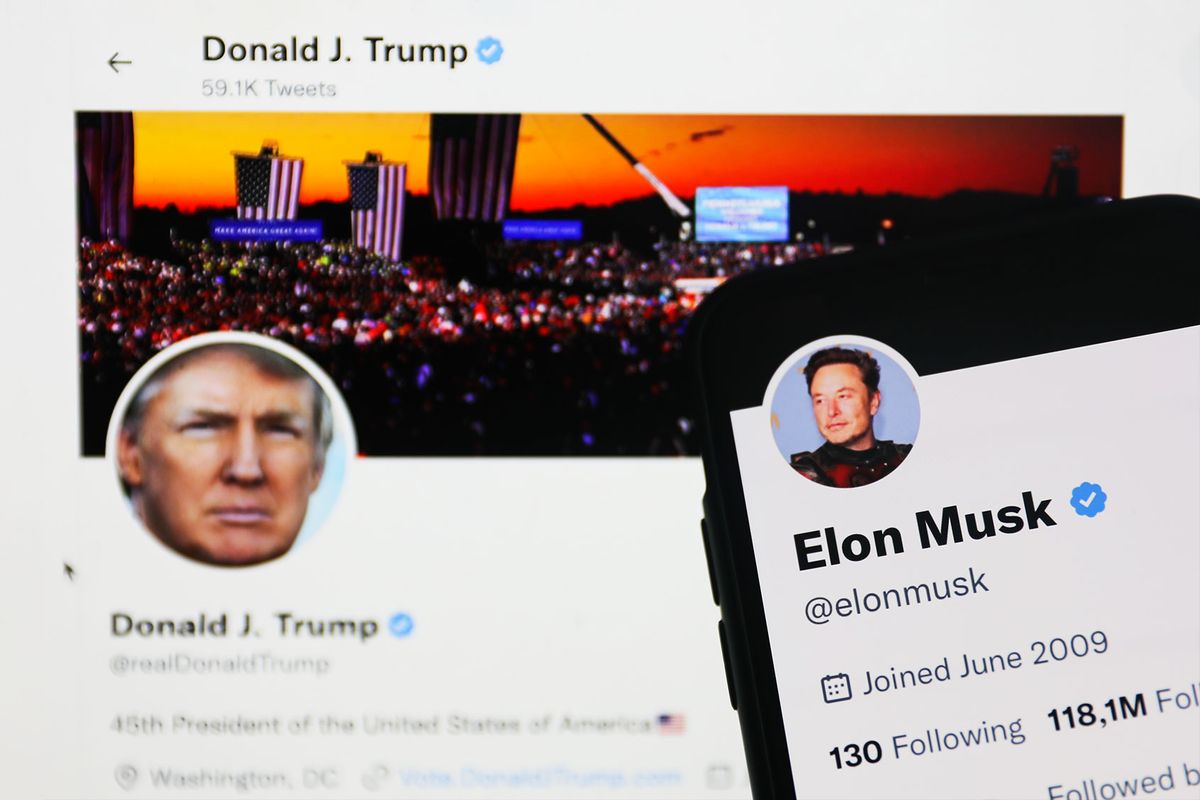 It seems we are a nation filled with people who desperately crave attention.

Consider me a casual observer and commentator on what I find alarmingly and amusingly stupid from those willing to walk into the public arena and drop their diaper in a bid for that attention.

Whether you're a 24-year-old ignorant racist, fomenting hatred and gaining attention by showing up at the former president's Golden Disco Palace in Florida where you can smell the spray-on '80s vibe as surely as you can identify the spray-on tan or you are the man who makes history by being the first twice-impeached former president to announce another run for the White House historically early because you crave the attention.

Either way? You're an attention junkie, whore or addict. Pick your title, it's the same thing — though "whore" may be more accurate as most of these people manipulate others for money and are not merely innocent junkies. An adult "political junkie whore" might actually be the most accurate term, though perhaps not the most favored. Julia Roberts played a hooker with a heart of gold in "Pretty Woman," but political whores in real life bear little resemblance to that. They're more like the toothless hookers (of all possible genders and orientations) in Nuevo Laredo's Boys Town, turning tricks for cheap makeup and dollar bills.

With Trump firmly established as today's premier political hooker, we have to realize that his breed also exists elsewhere in popular culture. For example, you could be a billionaire robber baron with a great need for attention who has purchased your own media or social media empire, driving the rabble wild with either desire or disdain — but making sure you get attention is your real game.

Is America's infatuation with billionaires finally coming to an end?

Or you can be a social media troll hiding behind the bushes and happily adding fuel to the fire, while avoiding any responsibility in search of the notoriety you so desperately desire.

The world continues to careen between crazy and dysfunctional, with occasional stops in reality just to check the baggage and make sure the bills are paid.

In the recent past, even nominally sane Republicans on Capitol Hill (nominal being a necessary qualifier) were firmly in the mutual embrace of a con man they often told us in confidence was criminally insane — yes, I do mean Donald Trump. They loved the attention and the money — fertile ground many a political parasite has thrived on in the past.

Now? Some Republican members of Congress are metaphorically running away from Trump, and literally running away from reporters asking them about their Josh Hawley/"Chariots of Fire" act whenever Trump is mentioned — especially since a few specific reporters refuse to give the Republicans safe haven to bash Trump while remaining safely anonymous. What's their beef? Don't they want the attention?

No matter how vociferously some of those Republicans may pretend to be offended by Trump's current behavior — which is, by the way, the same behavior he's exhibited since he crawled his way out of the social womb as a young adult — all those former sycophants will surely reattach themselves to Trump's bulbous posterior if it benefits them or their political campaigns in the future.

Nick Fuentes is the attention-seeking, Nazi-loving, Holocaust-denying far-right 24-year-old young man at the center of Trump's latest gaffe — a man often vilified by other extremists as being "too extreme."

Trump's answer to the firestorm around his dinner with Fuentes is "I don't even know who that guy is." That's an oldie-but-goldie response in Donald's melodramatic mental arsenal. It, of course, means he knows the guy perfectly well. Just ask George Papadopoulos or anyone else Donald has said that about in his sordid past.

But the press has long since abandoned any sense of calling out most of his lies. Trump has made us weary and we've got too much skin in the game: We're far too dependent on the audience attention we get from Trump. So, while he enjoys the rough-and-tumble of calling us "fake news" and trying to bully or antagonize those who push back, most of us are just strapped into the rollercoaster and here for the ride.

That's something most grifters understand, including but not limited to Elon Musk and Donald Trump. You cannot give Trump the benefit of the doubt, because he has left no doubt that he's a con man since his first moments in public life. If you don't see that, then congratulations: You're the mark.

Musk is another entitled rich guy from the Trump club who gets the benefit of the doubt — and like Trump, he is given it far more often than he deserves it.

Under the banner of restoring "free speech" to his recently purchased Twitter empire, Musk has embraced an increasingly significant number of changes that make his claims untenable. Granting amnesty to Trump and other hatemongers has also drawn the ire of Apple, another media powerhouse, and the onetime golden boy of Tesla and SpaceX  looks tarnished today. Reading his tweets is only slightly more amusing than Trump's old tweets. But they get him attention, and that is what Musk wants as he declares himself a patriot.

Musk was never a friend of the American people. He's a friend only to himself. He's Trump's long-lost pseudo-sibling, craving the attention Trump has. Musk wants to suck up all the oxygen in the room. Twitter is his bid to get it. His claim that he wants a large community sharing free speech on Twitter has become embarrassing.

Free speech cannot merely be a cacophony of capricious crap from divisive trolls who each have access to their mutually "exclusive facts." Musk has declared his company to be the future of journalism. Ha. I say if he wants to be a journalist, he should at least hire a copy editor. Those are in short supply but heavy demand, though not among the masters of the media universe. Musk doesn't know what a copy editor is, any more than he knows how to fix the problems of the media. If he means what he says about that, he should by now have reached out to those of us who actually understand the problem. It's complex, it's nuanced, and you won't get a lot of attention for carefully studying the facts.

Musk isn't entirely to blame for this debacle. The press shoulders a lot of blame by hero-worshiping him and Trump and other so-called elite "geniuses" in hopes of access. There are fewer and fewer reporters left on the streets who understand what their job is, and even fewer editors or managers who know how to get the best out of their reporters. Speaking truth to power? The truth is, the media has ceded its public power to politicians and is now being carved up by the robber barons they also caved into long ago.

Some people are unable or unwilling to recognize the obvious facts of the Holocaust, the moon landing, the Jan. 6 Insurrection, the COVID pandemic and climate change — and that's among the greatest follies of our species since we crawled out of the caves. Clinging to dangerous fictions has led to a media landscape dominated by demented human demons. That is partly why people like Fuentes, the Oath Keepers, Donald Trump and Elon Musk get our attention. Their asinine followers cheer them on with the devotion of Christian zealots (and often are Christian zealots) while the rest of us recoil in horror or laugh uncontrollably or some combination of the two — often within the same breath. Either way, the insanity draws attention to itself.

These attention addicts cheer and analyze to death everything about themselves. Far from being repulsed by those who find them insufferable, they enjoy the notoriety they gain from critics. The adrenaline rush of attention pushes them to even more outlandish antics. It's a lot like watching a toddler figure out that if he takes a crayon and draws on the living room wall, his parents will appear out of nowhere. It's magic.

But the dark arts come at a price. The successful prosecution of Oath Keepers leader Stewart Rhodes shows that reality can turn harsh for those who will do anything to get noticed. Any further analysis of this insipid behavior only provides the perpetrator with the additional attention he craves, even at his own expense. It is pathological and dangerous.

It also makes you wonder if they could get as much attention by working in a homeless shelter, volunteering to coach youth sports or teaching kindergarten. Would they give up their pathological desires for something a little more wholesome? We don't live in that world. We live in a world where a man-child can bay at the moon about his extreme opinions based on fiction and fear while screaming "Look at me!"

Then again, when you look at Trump, Musk and their ilk, you realize the world is better off with them nowhere near impressionable toddlers. The venom they spew may well result from some hidden tale of woe in their own upbringing, but there's no need to spread it to further generations. We already have to pay the price for our racist, elitist, misogynistic, ignorant mistakes by dealing with these people as adults.

You cannot back down. You cannot ignore them. You can't give them too much attention. (No, literally. No amount will ever be too much for them.) You can only inform others they've been conned — and some will never learn. You can prosecute the worst of them, as the Oath Keepers have found out and as Donald Trump will soon find out. You can publicly shame them. But you shouldn't disengage. Someone needs to be the substitute parent to these spoiled-rotten, adult-diaper-wearing crybabies.

Leave Twitter? Please. I'll stay for a while and put forth an effort. Trump, Musk, Fuentes, Matt Gaetz, Marjorie Taylor Greene, Louie Gohmert, Jim Jordan, Mitch McConnell, Rand Paul and a host of others all apparently had serious parental issues — probably with their fathers.

Spank them, change their diapers, give them a timeout, remove them from the public arena and prosecute them when justified. That's cultural parenting. And if you crave attention, then be careful what you wish for.

Or, if you like the movies, "Play for blood you say? That's just my game." As Doc Holliday said, "I'm your huckleberry."

from Brian Karem on Trump, Biden and America