Swift convictions suggest jury was eager to punish the real leaders of Jan. 6 — not just the foot soldiers 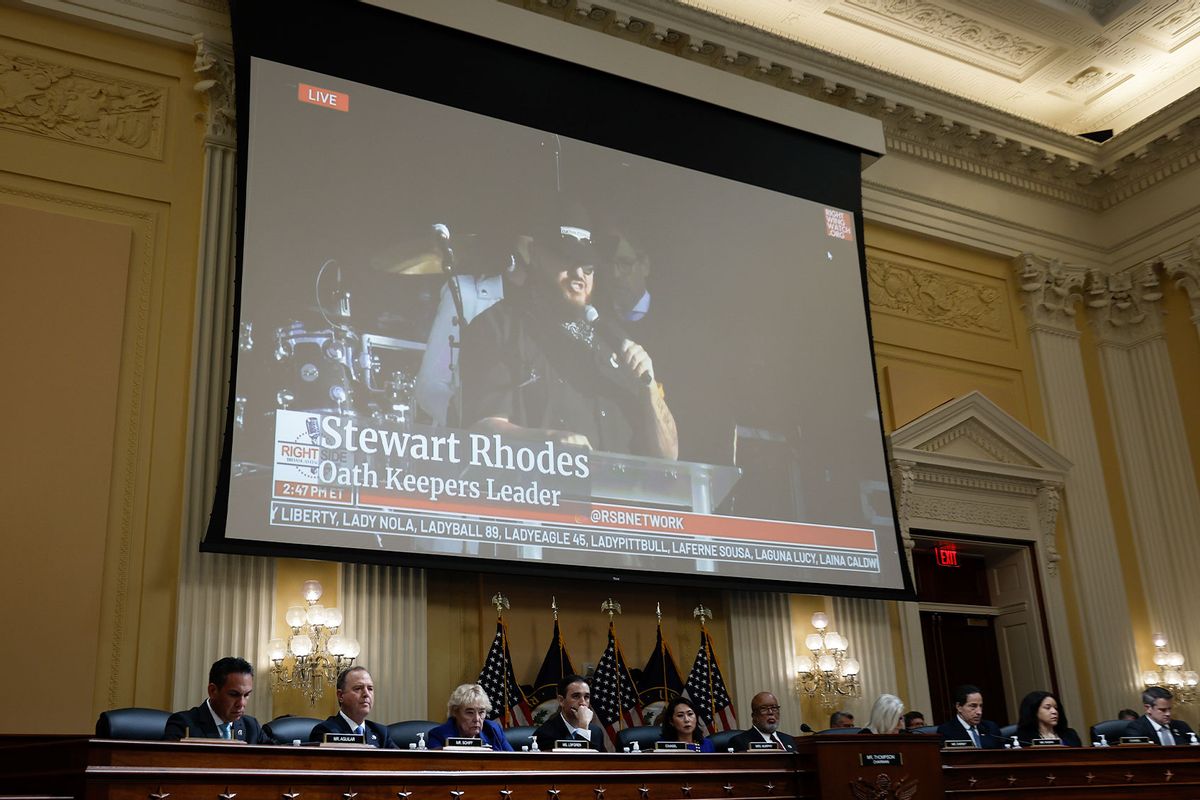 Oath Keepers founder Stewart Rhodes appears on a video screen above members of the Select Committee during the seventh hearing on the January 6th investigation in the Cannon House Office Building on July 12, 2022 in Washington, DC. (Anna Moneymaker/Getty Images)
--

On Tuesday afternoon, when word came down that the jury in the Oath Keepers trial in Washington, D.C., had already come to a decision, the speed suggested that the defendants were doomed. So far, this has been the most complicated of all the criminal proceedings stemming from the insurrection that Donald Trump incited on Jan. 6, 2021. Most people charged with crimes after storming the Capitol on that fateful day have faced simple charges, such as obstructing government proceedings and trespassing. But for this case, the Department of Justice was asking the jury to convict the defendants on a range of criminal charges, with the most serious being seditious conspiracy, which is notoriously difficult to prove.

Under the circumstances, legal reporters repeatedly warned audiences not to assume that the five insurrectionists on trial in a D.C. federal court would actually face punishment for their crimes. But despite all the moving parts and complicating factors, the jury spent only three days deliberating, a relatively brief period under these charged circumstances. That suggests the jurors were not distracted by political pressures or the various imaginative deflections offered by defense attorney. Sure enough, both Oath Keepers founder Stewart Rhodes and his right hand man, Kelly Meggs, were found guilty of seditious conspiracy, and all five defendants were convicted for obstructing an official proceeding and destroying evidence. Meggs and two other defendants, Jessica Watkins and Kenneth Harrelson, were also convicted on various conspiracy charges.

Although three of the five defendants were acquitted of the sedition charge (and Rhodes was found not guilty on two conspiracy charges), this verdict should be understood overall as a resounding victory for the prosecutors. Perhaps most important, it shows that juries of ordinary citizens are fully capable of understanding the evidence that what happened on Jan. 6, 2021, was not a spontaneous riot but a preplanned insurrection. As former federal prosecutor Randall Eliason told the Washington Post, "The jury's verdict on seditious conspiracy confirms that January 6, 2021, was not just 'legitimate political discourse' or a peaceful protest that got out of hand. This was a planned, organized, violent assault on the lawful authority of the U.S. government and the peaceful transfer of power."

After this, the DOJ and Attorney General Merrick Garland should set aside any fears when it comes to indicting the head honcho of the insurrection, former President Donald Trump. In fact, that conclusion is only strengthened by the fact that the jury convicted the two leaders of the Oath Keepers on the most serious charges, while only finding their underlings guilty of lesser offenses. That reads as clear evidence that they wanted to establish accountability for those who instigated and led the insurrection, rather than watching Trump's camp followers take the fall for doing his bidding.

By the end of the 24-hour news cycle, it may start to feel like this verdict was inevitable. It wasn't, and in the concluding states of this trial, many legal experts weren't optimistic that the DOJ would win. As former prosecutors and law professors told the Associated Press in September, juries often struggle to understand what "seditious conspiracy" means, and may be reluctant to find that someone intended to overthrow the government when they didn't actually succeed. In addition, as the Guardian reported in January, sedition charges "carry so much political weight" that it becomes conceivable for a lone juror who shares at least some of the defendants' political views to block a guilty verdict and force a mistrial.

Even though the trial was held in the very blue District of Columbia, those concerns hung over this trial from the beginning. For nearly two years now, conservative media and Republican politicians have been trying to rewrite the public memory of Jan. 6, recasting it as "legitimate political discourse" and pretending that the violent attack on law enforcement and the U.S. Capitol was the work of a few bad apples. That political pressure campaign has been so successful that most Republican voters now consider the Jan. 6 insurrection a "legitimate protest," even though most of them disapproved of it in the immediate aftermath. There were almost certainly Republican voters on the jury, and some observers feared they would retreat into partisan loyalty and ignore the facts.

There were other reasons for prosecutors to feel concerned about how this would go. For one thing, they had five separate defendants who had done all sorts of different things before and during the riot. Rhodes, who holds a degree from Yale Law School and was formerly an attorney, made sure to avoid entering the Capitol himself even while goading his minions into it, creating a semblance of plausible deniability that he didn't know what was about to happen. Prosecutors presented a mountain of evidence for the jury to sift through, including hundreds of decrypted text messages, creating the risk that jurors would simply feel overwhelmed or seize upon irrelevant details to justify an acquittal. To make things even worse, the jurors were sent home for the Thanksgiving holiday, creating an obvious opportunity for those with Republican inclinations to be talked into not-guilty verdicts by friends and family.

But the biggest threat of all was that jurors might be sucked in by the defendants' claim that all their talk about "civil war" and overthrowing the government was nothing serious, just an elaborate form of cosplay. As I wrote during the trial, white people, especially white men, are especially likely to get away with the "just kidding" defense. Donald Trump, in particular, has repeatedly deflected criticism for outrageous things he says and does behaviors by claiming that it was all in fun — or, in the case of his bragging about sexual assault, "locker room talk." As I write this, Trump's defenders are excusing his dinner with white supremacist and Nazi sympathizer Nick Fuentes by portraying Trump as a daft know-nothing who is nice to anyone who flatters him.

Furthermore, the Oath Keepers are without a doubt a bunch of clowns, which makes it easier for them to sell a narrative that the Jan. 6 insurrection was just a bit of fantasy role-play that got out of hand. The jury clearly didn't buy that argument, an especially welcome data point which suggests that, in the right circumstances, facts can penetrate the reality-distortion field around Jan. 6 that has been created by right-wing propaganda.

It's noteworthy that Rhodes was held to account as the leader of this seditious conspiracy, since he was careful to absent himself physically from the Capitol at the height of the attack. At trial, he threw his fellow Oath Keepers under the bus, claiming he had played no part in pushing them to violence and calling his own followers "stupid" for breaching the building.

If that sounds familiar, it should. Rhodes was acting exactly like Donald Trump: Using coded language to push his supporters into breaking the law, and then distancing himself afterward with the transparently false claim that his flunkies acted of their own accord. The jury saw right through this ruse, which should reassure federal prosecutors that the same logic could work in a prospective case against Donald J. Trump. As the Jan. 6 House committee hearings have shown, there's overwhelming evidence that Trump deliberately incited the Capitol riot, with he explicit hope and intention of using mob violence to overturn the legitimate results of the 2020 election and install himself illegally as president.

Obviously, any criminal trial with Trump as the defendant would have a different jury and higher stakes, meaning that we cannot forecast a verdict in advance with any certainty. But the Oath Keepers outcome shows that it's still possible, even in our highly polarized and fact-resistant times, for a group of 12 Americans to assess evidence calmly and draw the correct and obvious conclusions. Even if some of them are Republicans! If this jury was willing to convict the leader of one faction of the Capitol insurrectionists on criminal charges that could send him to prison for the rest of his life, there's reason to believe that another jury might be willing to convict the man who is finally, ultimately and by far most responsible for that national trauma.