In my family, my mother's iced brownies are simply known as "the brownies" 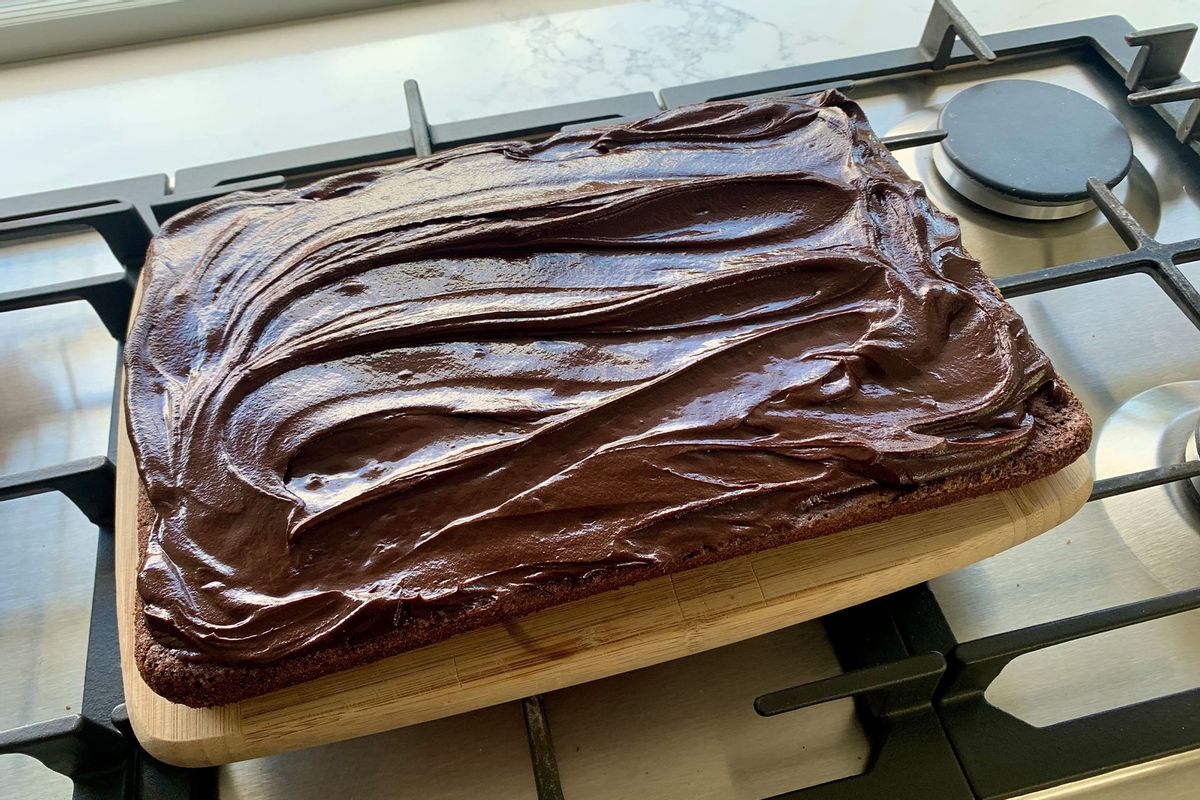 Maybe it's because I grew up on my mother's cooking that I didn't realize how special it was until I was grown. What she made was all I knew for a lot of years. And if it wasn't my mother's cooking I was eating, it was one of my grandmothers', so I was extremely fortunate and spoiled on the food front as a child, and really the whole time I lived at home.

My nieces loved my mother's cooking and didn't take it for granted as I probably did growing up. My mom lived with them for a time, and so they, too, grew up on her cooking. My mom's food is simple, Southern food, made with ordinary ingredients and no hard-to-source spices. It pleases everyone, young and old. Although my nieces enjoy a much more expansive variety of foods now that they are adults, they will both tell you there is nothing quite as satisfying as coming home to my mother's chicken-fried steak, skillet potatoes and a pan of her brownies.

These brownies are a perfect example of what my mom did best: deliver something extraordinary from something most feel is pretty ordinary. Her food impresses the most sophisticated foodies while still pleasing all the children at the table, which is pretty artful in my book. She cooked and served the food she grew up eating, and I'm just happy she continued her family's food traditions with us and ultimately passed these recipes down as she has.

The girls are the ones who began calling her brownies, "the brownies."

When they would ask her to make them, they sounded so reverential, like it was some very serious business they were conducting. I won't say it sounded like a drug deal, but it did sound like their young sugar-loving brains needed a fix when they made their solemn ask for "the brownies." The tones of their voices implied that there was some secret ingredient involved, a secret something that made "the brownies" very valuable and radically different from any others they might score. I'm pretty sure Margie-Mom, as they called her, always acquiesced and made them whenever they wanted them, but they always acted like it was a big thrill for them anytime they got them.

Every one of the girls' friends had to have them too when they visited; and as my nieces got older, the brownies continued to be revered by all and were always made for celebrations. My mom made them for cast parties, graduation parties, birthdays and later even the girls' bridal showers. There were also batches that got made for breakups with boyfriends, the loss of a beloved pet and for other sad times as well. Not only did these brownies add more joy to joyful times, but they were a pretty reliable cure for heartache. I have years and years of anecdotal evidence of this magical feat occurring.

I once had a friend in high-school who became so obsessed with these brownies one night that she made herself sick by continually cutting and eating tiny little bite-size pieces straight from the pan. Thinking no one would notice if she cut little bits at a time, as opposed to cutting one large brownie, she ate almost the entire uncut sheet of them while we were all asleep. No one could believe they were nearly gone the next morning; she just could not resist taking that one more proverbial bite.

Don't say I didn't warn you: be careful when you make these. They are rich and wield great power. They are impossible to ignore, and you will over-indulge. They will call out to you like Sirens, particularly in the night, beckoning you over to their foil covered pan with the promise of pure bliss. They deliver on that promise as you will see.

The story goes that once my mother found Betty Crocker Supreme Brownie Mix, that's all she used to make her brownies from that day forward. If I heard her tell one person, I heard her tell a hundred over the years that she preferred that mix to the homemade recipe she used prior. No one could believe her brownies were "box" brownies, but they most definitely were once she tried this particular one. But like I stated earlier, her frosting is the crowning glory to her brownies, and the frosting is her recipe (or her mother's or her grandmother's).

Sadly, at some point, not terribly long ago, the Betty Crocker company changed the recipe of our beloved mix. Hopefully, they have changed it back by now since there was quite an uprising about it when it happened. I stopped using their mix once it changed because it no longer turned out the brownies we all loved so much. My mom is older now and no longer makes them, and I am happy with the recipe I use in place of the bygone Betty Crocker mix, but I am doubtful she would be.

The brownie recipe I use now is included here, but if Betty Crocker's Supreme Brownie Mix is back to its original formula (I need to check on that!), I would have to highly recommend it. I am certain it is what my mom would prefer in any blind taste test brought forth.

These brownies have a long history in my family, and I bet they will go on to have one in your family too. So rich and delicious, they will make any chocolate lover's dreams come true. The only addition my mother ever threw into these was chopped pecans. Personally, I like them best, but feel free to add them if you desire.

Now that I am grown, I smile daily with each realization of how correct my mom was about most everything involving taste. From what literally tastes just right to what looks just right decoratively, she has always just known. The older I get, the more I replay in my mind all of her suggestions for both food and home, and I am so appreciative of all she taught me. Whether it was how to balance flavors in my cooking or how to balance color and art in my home, she had, and still has, great taste. These brownies make just one more thing she perfected over the years in her simple, natural, unassuming way, and I am happy to respectfully share the recipe with you here today.