A new day? Voters stood up for democracy — and now we have the data 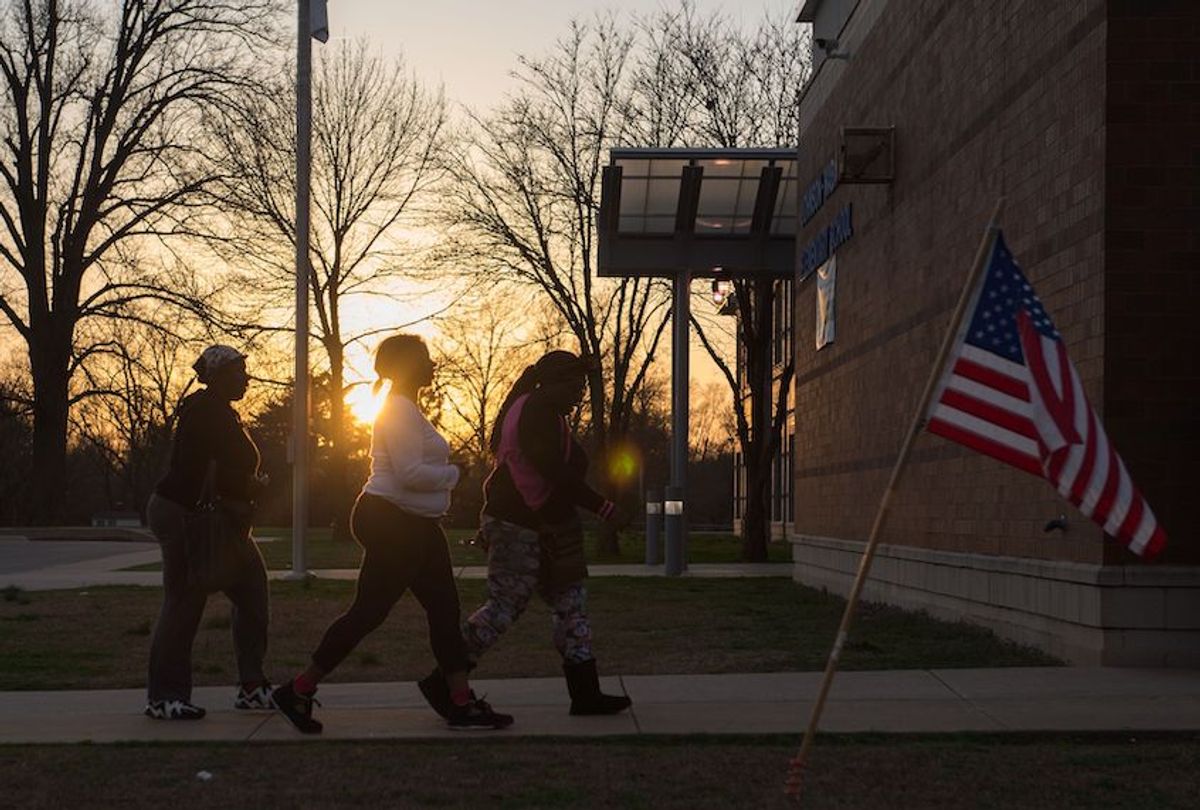 Last-minute voters arrive to cast their vote during Missouri primary voting at Johnson-Wabash Elementary School on March 15, 2016 in Ferguson, Missouri. (Michael B. Thomas/Afp Via Getty Images)
--

In November's midterm elections, many Americans voted to slow down Donald Trump and the Republican Party's assault on democracy. But how much of that was intentional and specific support for the vague concept known as "democracy," and how much was motivated by more concrete issues, such as protecting women's reproductive rights or a rejection of Trump?

The answers are not trivial or pedantic: whether and how much the American people are invested in defending democracy against the rise of neofascism is likely to determine the future of the country.

In a recent essay at the Huffington Post, Paul Blumenthal reports on a new poll of 71 competitive House districts which found that democracy was indeed an important concern:

Concerns about threats to democracy motivated Democrats and independents to turn out while also helping independents decide to vote for Democrats, according to a voter survey from Nov. 11-16 by Impact Research, a Democratic polling firm.

"The biggest takeaway here is just how important protecting democracy was for voters in this House battlefield immediately coming out of the election," said Molly Murphy, the president of Impact Research, which conducted the survey for Democratic Party-aligned political action committees End Citizens United and Let America Vote.

Six in 10 voters cited protecting democracy as an extremely important reason that they decided to vote in November. This put the issue ahead of inflation (53%), abortion (47%) and crime (45%). When asked to choose the top two issues that motivated them to vote, 50% chose protecting democracy, second only to inflation at 55%.

These findings are largely in line with preelection surveys from The New York Times, The Wall Street Journal, CBS News, NBC News, Quinnipiac University Poll and the Grinnell College National Poll, as well as exit polling from The Associated Press, NBC News and CNN.

These findings are in some ways surprising. Decades of political science research has repeatedly shown that the American people by and large are politically unsophisticated, not driven by ideology and do not possess a deep understanding of public policy. Much of Americans' political decision making tends to be driven by questions of emotions, symbolic attachment to political parties and candidates (and increasingly by "negative partisanship") as compared to more "rational" calculations about politics.

But the evidence also shows that many voters use heuristics and other decision-making shortcuts to reason their way through complex questions of politics. To that point, Blumenthal quotes Rep. Pat Ryan, who was elected this year in a highly competitive district in New York and said he "saw the issue of protecting democracy overlapping with another top concern for Democrats:" the Supreme Court decision that overturned Roe v. Wade.

"What people missed in polls — which I heard over and over again in conversations, if you actually listen — is people link these issues together," Ryan said. "People intuitively, of course, understood that if you're taking away a fundamental right from more than half of the American people, then all these other rights and freedoms are on the table. And that becomes an existential democracy — small-d democracy — issue."

Just as some voters saw an overlap between abortion and democracy, many interpreted the concept of protecting democracy beyond the sole issue of Republicans embracing Trump's election fraud lies and efforts to overturn election results.

This suggests that in this year's midterm elections many American voters in fact displayed greater sophistication than pollsters and other professional politics watchers assumed.

American politics frequently features a dynamic where the mass public tends to vote against candidates and issues that are deemed too far outside the mainstream. In essence, the vote becomes a type of thermostat to calibrate public policy and the overall direction of the country.

Of course Trump wants to "terminate" Constitution: He wants to seize power and rule by force

In keeping with that dynamic, Ryan also told Blumenthal that Democrats can win when they help voters "'understand the stakes' — that 'one party really, increasingly, overtly was for blowing up our democracy, eroding trust in free and fair elections, denying election outcomes' while the other party was saying, 'No, we're going to stand and fight. ... We saw a rejection across the country of the extremist antidemocratic direction that extreme Republicans wanted to go.'"

It appears that many Americans are finally emerging moving from a defensive state of learned helplessness, in response to the Age of Trump and its ongoing attacks against democracy, to a position that is more pro-active and direct. That is unquestionably a good sign, but there remain great challenges ahead in what will be a very long struggle to defend and then improve American democracy against authoritarianism and neofascism and other threats.

A healthy democracy is based upon shared norms and values about reality, truth, legitimacy, compromise, consensus and power. Even more specifically, one of the most basic principles in a democracy is that elected officials and other democratic elites are held accountable to the public will, primarily but not entirely through elections.

Today's Republican Party and the larger "conservative" movement reject such values. In realpolitik terms, this makes sense: Often by overwhelming majorities, the American people as a whole oppose most of the policies advocated by Republicans.

The contemporary Republican Party and "conservative" movement are fixated on power above all other things. To them, public opinion is not just something to be "won," or even massaged or manipulated, but rather something to be ignored or overruled whenever it does not their agenda.

For example, the Big Lie strategy is prefaced on the lie that votes for Democratic candidates, especially from Black and brown people in large cities, are somehow fraudulent as compared to the supposedly more trustworthy and "high quality" votes of white people in rural or exurban areas.

Republicans and the "conservative" movement also seek to advance their anti-democracy campaign through the Supreme Court and judicial branch, interest groups and think tanks, their own propaganda media, Christian nationalism, and a powerful network of donors and funders. Gerrymandering, voter suppression and outright voter nullification, along with the threat and reality of right-wing violence and terrorism as seen on Jan. 6, 2021, are central elements in the American right's campaign to end democracy. In total, these tools and forces are a way to advance the "tyranny of the minority" by circumventing, subverting, negating, undermining, and/or outright ignoring and nullifying the democratic will and the common good.

In a recent New York Times column, Jamelle Bouie reflected on the complexities of majoritarianism amid the ongoing democracy crisis:

It's not the national majority that threatens the right to vote or the right to bodily autonomy or that wants to strip transgender Americans of their right to exist in civil society (on that last point, 64 percent of Americans, according to the Pew Research Center, support laws or policies that would "protect transgender people from discrimination in jobs, housing and public spaces"). If it were up to majorities of Americans — and if, more important, the American political system more easily allowed majorities to express their will — then Congress would have already strengthened the Voting Rights Act, codified abortion rights into law and protected the civil rights of L.G.B.T.Q. Americans. Even the legislative victories most Americans rightfully admire — like the Civil Rights Act of 1964 — were possible only with a supermajority of lawmakers assembled in the wake of a presidential assassination.

If it were up to the national majority, American democracy would most likely be in a stronger place, not the least because Donald Trump might not have become president. Our folk beliefs about American government notwithstanding, the much-vaunted guardrails and endlessly invoked norms of our political system have not secured our democracy as much as they've facilitated the efforts of those who would degrade and undermine it.

Majority rule is not perfect but rule by a narrow, reactionary minority — what we face in the absence of serious political reform — is far worse.

America's political class, the mainstream media and other elites are deeply reluctant to consistently and plainly state that the modern Republican Party rejects multiracial, pluralistic democracy. To confront such a fact about one of the country's two institutional political parties would be to acknowledge an epistemic crisis and the much deeper troubles plaguing the country.

What will happen if Americans continue to vote and mobilize in defense of their democracy and then use that political energy to advance a truly transformative agenda that serves their collective interests? This would represent a great step forward, but we can be sure that those who despise and oppose real democracy would resist ferociously.

As the truism holds, power concedes nothing without a demand. This is simultaneously a dangerous moment as well as a potentially productive and exciting one in America's struggle to become a true democracy. There are legitimate reasons to be hopeful -- but that same hope must be accompanied by reasonable caution and vigilance.

about the aftermath of the 2022 midterms