Of course Trump wants to "terminate" Constitution: He wants to seize power and rule by force

Trump's recent conduct shouldn't surprise anyone: The MAGA movement's goals have nothing to do with democracy 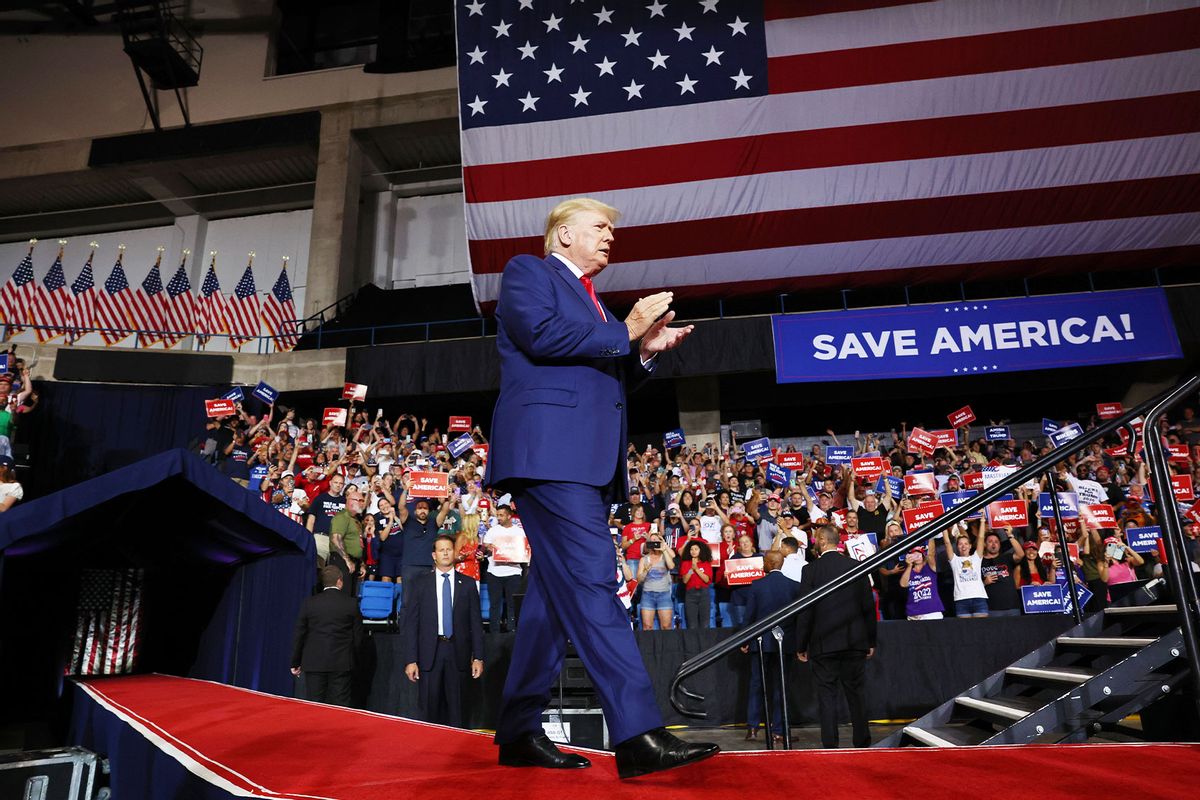 Donald Trump aspires to be a warlord. As he showed repeatedly during his presidency and afterward — and in his decades of public life before that — he idolizes violence and is willing to use it to achieve his goal of unlimited power. More broadly, the ideological root and driving force of fascism is the quest for unrestrained, corrupt power. Violence is a central and inseparable element of that political project.

Trump must also be understood as the leader of a personality cult. His followers are devoted to him not just because of his personality and undoubted charisma — although those are important — but because of what he represents and symbolizes. In this case, Trump has offered his followers license to hurt those people they resent, fear and view as "un-American" or as lesser human beings, and otherwise to indulge their worst impulses without consequences.

The language and imagery of the MAGA movement and Trumpism are clearly those of a cult and movement organized around a strongman demagogue. Because these slogans and signifiers are part of a larger fascist imaginary, the facts and specifics do not really matter. What matters is the shared perception that violence, domination and apocalyptic revolution are the tools that will ultimately achieve Trump's and the MAGA movement's larger goals, especially by suppressing or silencing any person or group who dares to oppose them.

Over the course of the last few weeks, Donald Trump has amplified his warlord ambitions, and increasingly embraced the types of extreme beliefs and behavior that fuel such an identity. Contrary to what most of America's political class and mainstream media would prefer to believe, there is a deep well of support for such authoritarian and fascistic politics and values in the United States.

As you surely know by now, on Nov. 22, Trump — who is both a former president and now an announced presidential candidate — hosted a pre-Thanksgiving dinner at Mar-a-Lago headquarters with rapper Kanye West, aka Ye, who has remade himself as a Black neofascist and Hitler fan. Nick Fuentes, an avowed white supremacist and antisemite and a de facto neo-Nazi, was also there as West's guest. (Trump has claimed, with very little plausibility, that he had no idea who Fuentes was.)

White supremacy, Nazism, antisemitism and other forms of racial authoritarianism are inherently and fundamentally violent, genocidal and eliminationist enterprises. The apparent fact that Trump continues to embrace such beliefs and the odious people who espouse them is a great victory for the global white supremacist movement and its decades-long project to mainstream and normalize hatred and violence, not just on the far-right fringes of the "conservative" movement but in American political culture as a whole.

Last Thursday, Donald Trump again demonstrated his commitment to becoming an American fascist warlord. As Salon's Samaa Khullar reported, Trump "expressed his solidarity with the rioters who attacked the U.S. Capitol on Jan. 6, 2021 in a video for a fundraising event ... hosted by the Patriot Freedom Project, which assists the families of those being prosecuted by the government":

"People have been treated unconstitutionally in my opinion and very, very unfairly, and we're going to get to the bottom of it," he said in the video, which appears to be shot in his Mar-a-Lago estate in Palm Beach, Florida. He also complained about the "weaponization of the Department of Justice," and claimed the nation was "going communist."

In a September interview, Trump revealed he was "financially supporting" some of the Jan. 6 defendants and promised them pardons and a government apology if he is re-elected in 2024. "I mean full pardons with an apology to many," he told conservative radio host Wendy Bell.

A successful warlord must of course reward the loyalty of his most loyal foot soldiers and paramilitaries, especially those who enthusiastically embrace his most dubious and dangerous commandments. At the Boston Globe, Jess Bidgood observes that Trump has launched his third presidential campaign by making clear that the "extremist fringe that was always part of his base is moving to center stage":

There was his shocking dinner at Mar-a-Lago last week with the white supremacist Nick Fuentes and Ye, the rapper better known as Kanye West who has made a series of antisemitic statements. Trump also reposted memes from QAnon conspiracy-mongers on one of his social media accounts, an increasingly common occurrence. "It's not a flirtation, it's a cohabitation," said Tim O'Brien, a biographer of the former president. "If the only difference is he's now dining with them and in the past he's refused to denounce them ... he's just more comfortable taking it all the way."

The shift was more subtle but evident at his campaign announcement earlier this month. Even as Trump delivered a kickoff speech that hewed faithfully to the teleprompter, his cheering audience was dotted with supporters who had rallied on his behalf at the Capitol on Jan. 6, according to Politico — people who, just like Fuentes and Ye, had been welcomed onto the grounds of his private club.

Trump's latest and perhaps most blatant attack on democracy came this past weekend, when he literally declared on his Truth Social platform that the U.S. Constitution should be "terminated" so that he can be returned to power immediately. It is no exaggeration to say that Donald Trump wants to be a dictator:

So, with the revelation of MASSIVE & WIDESPREAD FRAUD & DECEPTION in working closely with Big Tech Companies, the DNC, & the Democrat Party, do you throw the Presidential Election Results of 2020 OUT and declare the RIGHTFUL WINNER, or do you have a NEW ELECTION? A Massive Fraud of this type and magnitude allows for the termination of all rules, regulations, and articles, even those found in the Constitution. Our great 'Founders' did not want, and would not condone, False & Fraudulent Elections!

How is the mainstream news media responding to Trump's escalating warlord behavior and his threats of violence? As usual, largely through mockery and forced, anxious humor. Also by downplaying or ignoring the danger, failing to provide proper context and repeatedly asserting that the country's democracy crisis is fading because of the midterms and that a return to "normal" is almost here. Whenever possible, the media defaults to its obsolete habits of the pre-Trump era: Both-sides coverage, conventions of "fairness" and "balance," access journalism and horserace coverage focusing on who is supposedly up or down in opinion polls and fundraising. All these familiar patterns of Beltway reporting and commentary do the work of normalizing both Trump and the Republican fascist movement.

As I wrote in an earlier essay at Salon:

Ultimately, as Donald Trump becomes more desperate, he will reveal more of his true self: a violent predator who will almost always attack instead of retreating or otherwise surrendering.... Aspiring warlord Donald Trump has told America and the world exactly what he and his movement intend to do. Unfortunately, the mainstream news media and other hope-peddlers have deluded themselves into thinking that it's all a misunderstanding or harmless hyperbole. We should take Trump at his word. On these issues, he does not prevaricate or tell lies. It will do no good to protest that you couldn't possibly have known. We all knew this was coming, and now it's here.

One of the most dangerous errors being committed by the mainstream news media is a choice not to draw consistent connections between the words and deeds of Donald Trump and other Republican fascists and the behavior of their followers. Political scientists and other experts have repeatedly shown that tens of millions of Americans express clear support for Trump's coup attempt and the Capitol attack of Jan. 6. 2021. Among that group there are many — even a small percentage would be a large number — who are prepared to engage in and support right-wing political violence and terrorism, with the goal of removing Joe Biden and the Democratic Party from power permanently and ending the country's efforts to build a multiracial, pluralistic democracy.

As an institution, the mainstream news media consistently chooses to depict Trumpists and other white Republicans and "conservatives" in sympathetic terms, as fundamentally decent people and "real Americans" who feel justified anger and alienation and who must be heard and understood. Few if any other groups are treated with such fawning generosity, and/or such condescension.

This reflects various factors, including the pervasive influence of white privilege and the white racial frame, the media's fear of being labeled as unfair or biased against "conservatives," a reluctance to alienate advertisers and an imagined "middle American" public, and a misguided commitment to the "moderate" middle ground rather than to telling the truth and defending democracy. The net effect of all this is that right-wing political violence is a fringe phenomenon outside mainstream political discourse, instead of a central ingredient in the Republican Party and "conservative" movement's approach to politics and society. As we should have learned from Jan. 6, such an assumption is dangerously flawed.

about the ex-president America can't shake off