Ye criticized Trump and said he should have freed the Jan. 6 prisoners when he “had the chance” 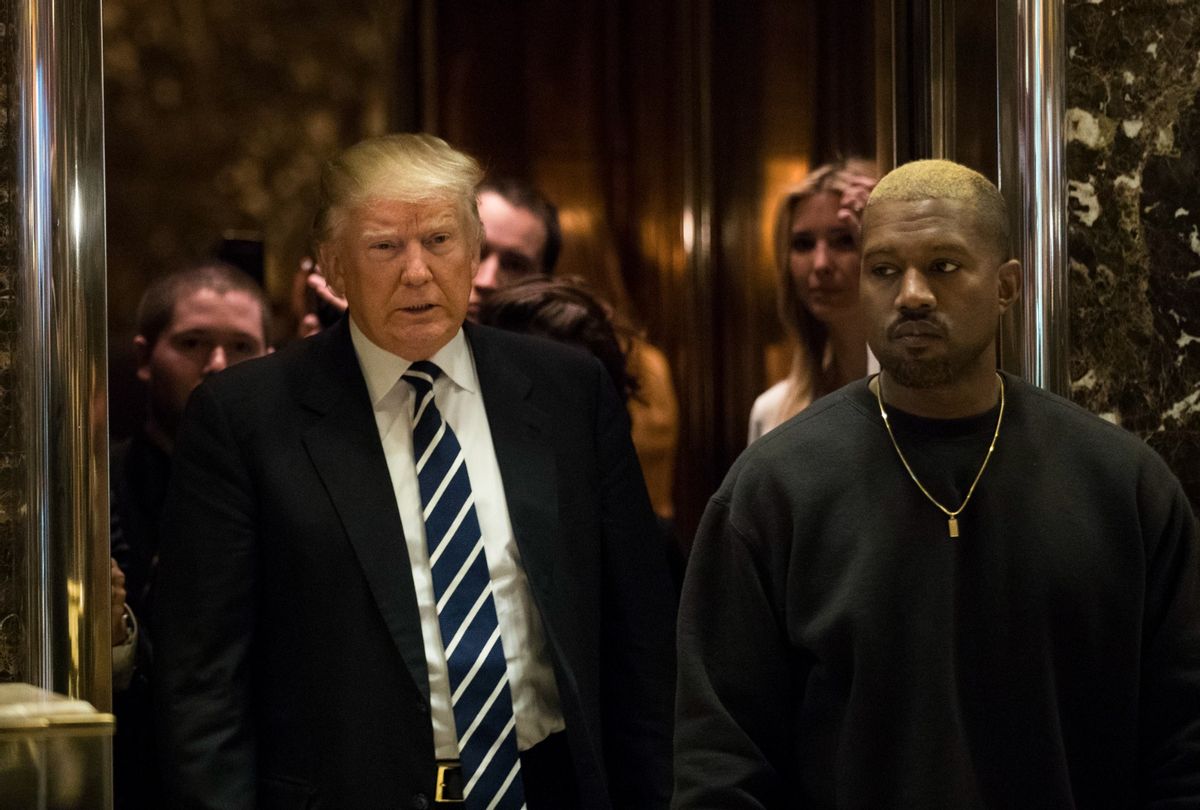 Former President Donald Trump expressed his solidarity with the rioters who attacked the U.S. Capitol on Jan. 6, 2021 in a video for a fundraising event on Thursday night hosted by the Patriot Freedom Project, which assists the families of those being prosecuted by the government.

"People have been treated unconstitutionally in my opinion and very, very unfairly, and we're going to get to the bottom of it," he said in the video, which appears to be shot in his Mar-a-Lago estate in Palm Beach, Florida. He also complained about the "weaponization of the Department of Justice," and claimed the nation was "going communist."

In a September interview, Trump revealed he was "financially supporting" some of the Jan. 6 defendants and promised them pardons and a government apology if he is re-elected in 2024. "I mean full pardons with an apology to many," he told conservative radio host Wendy Bell.

The Jan. 6 insurrection resulted in the deaths of four people and around 140 members of law enforcement were injured by rioter attacks, which included weapons such as flagpoles, baseball bats, stun guns, bear spray and pepper spray. One police officer, Brian Sicknick, suffered two strokes after being sprayed with a powerful chemical irritant and died the next day.

"He tried to f**k me": Kanye campaign chief says dinner was set up to "make Trump's life miserable"

Trump's video comes just days after far-right Oath Keepers leader Stewart Rhodes and his associate Kelly Meggs were convicted of seditious conspiracy for trying to stop the peaceful transfer of power from Trump to President Joe Biden. Rhodes, Meggs and three other associates were also convicted of obstructing Congress as it tried to count electoral votes — an offense that carries up to 20 years in prison.

More than 800 defendants from nearly every state and the District of Columbia have already been arrested and federally charged for their participation in the Jan. 6 attack.

Trump's statement of support was released after a controversial private dinner at his Mar-a-Lago resort with rapper Kanye West, also known as Ye.

West has made numerous antisemitic comments recently and attended the dinner with a guest: white nationalist and Holocaust denier Nick Fuentes. Trump has since claimed he didn't know of Fuentes before their dinner — a statement that Fuentes confirmed — but the meeting brought forth harsh criticism from Republican rivals and allies of Trump alike, including former Vice President Mike Pence.

While Trump was likely expecting a photo-op with West to boost support for his third bid for president, he ended up on the receiving end of a lecture from the rapper, according to NBC News. West said that Trump was not doing enough for those arrested in the Capitol riots. West reportedly told Trump that he may run for president himself, and that Trump should be his running mate.

In a series of "Mar-a-Lago debrief" videos posted on Twitter, West said that Trump should have freed Jan. 6 prisoners when he "had the chance," and added details about their dinner conversation.

"I think the thing that Trump was most perturbed about, me asking him to be my vice president," West said in another video. "I think that was like lower on the list of things that caught him off-guard."

West added that Trump "started basically screaming at me at the table telling me I was going to lose," at which point West also lost his patience. "I'm like hold on, hold on, hold on, Trump, you're talking to Ye," he said in the video.

One longtime Trump adviser told NBC News that West only brought Fuentes to cause a media circus. "The master troll got trolled," the adviser said. "Kanye punked Trump."

Milo Yiannopoulos, a far-right political adviser to West, confirmed this suspicion, claiming he was "the architect" of the plan to slip Fuentes into the private dinner in order to dissuade Trump from becoming an "establishment bore" by running for president again.

"I also wanted to send a message to Trump that he has systematically repeatedly neglected, ignored, abused the people who love him the most, the people who put him in office, and that kind of behavior comes back to bite you in the end," Yiannopoulos told NBC News of his plan.

Yiannopoulos knew that news of the dinner would leak and Trump would inevitably mishandle it, so he arranged it "just to make Trump's life miserable."

Trump was apparently "blindsided" by Fuentes' presence, believing it was a set-up, according to one of Trump's confidants who spoke to NBC News under the condition of anonymity.

In a series of statements on his Truth Social media platform, Trump admitted Fuentes was there but denied knowledge of his past hate speech.

"Ye, formerly known as Kanye West, was asking me for advice concerning some of his difficulties, in particular 'having to do with his business,'" Trump said in a statement about the dinner. "We also discussed, to a lesser extent, politics, where I told him he should definitely not run for President, 'any voters you may have should vote for TRUMP.' Anyway, we got along great, he expressed no anti-Semitism, & I appreciated all of the nice things he said about me on 'Tucker Carlson.' Why wouldn't I agree to meet? Also, I didn't know Nick Fuentes."

Along with Fuentes, West has also publicly aligned himself with Jan. 6 organizer Ali Alexander. During a bizarre antisemitic rant on Alex Jones' Infowars show, the rapper handed over his Twitter account with over 32 million followers to the "Stop the Steal" organizer who was banned on the platform.

JUST NOW: "I see good things about Hitler, also. The Jews... Every human being has something of value that they brought to the table, especially Hitler."
— Kanye West on far-right conspiracy theorist Alex Jones' InfoWars show.

This is Nazism. When are we going to say ENOUGH?

"INVESTIGATE THE CIVIL RIGHTS AND DUE PROCESS VIOLATIONS OF THE J6 POLITICAL PRISONERS," Alexander wrote on West's account. "Why were the only people killed unarmed protestors that day? FREE ALEX, FREE NICHOLAS, FREE SPEECH, FREE ALI." All three tweets have now been deleted as West's account was suspended after posting a swastika.

West's publicist was also involved in the efforts to overthrow the 2020 election. Chicago publicist Trevian Kutti traveled to the home of Ruby Freeman, a terrified temporary election worker in Georgia who had received death threats after being falsely accused by Trump of manipulating votes, Reuters reported earlier this year.

Kutti arrived at Freeman's doorstep offering help from a "high profile individual," but neglected to mention that she worked for West. The message from that individual, as reported by Reuters, was simple: confess to the bogus voter-fraud allegations, or people would come to her home in 48 hours and she would be arrested.

"I cannot say what specifically will take place," Kutti is heard saying in a video recording of the conversation. "I just know it will affect your freedom and the freedom of one or more of your family members," she threatened.

"You are a loose end for a party that needs to tidy up," Kutti added, claiming "federal people" were involved, without naming anyone.

Kutti also directly addressed the Cobb County police official who recorded the footage from her body camera, requesting her to keep the footage under wraps. "I do want the officer to know that this is, at this moment, a conversation between private citizens," Kutti said. "I am hoping you are trusting that this information does not go any further."

While representatives for West have claimed Kutti was not associated with him or his enterprises at the time of the interaction, she served as West's director of operations.

about Trump and Kanye