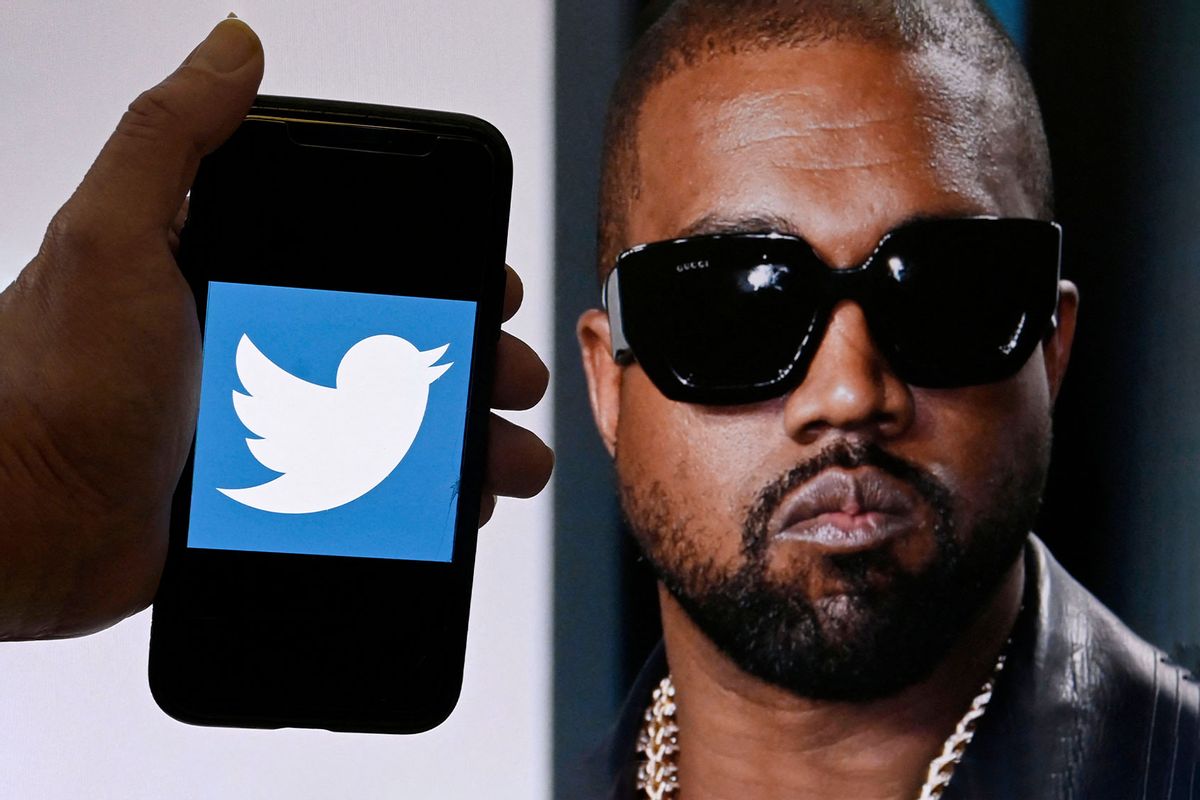 Rapper Ye, formerly known as Kanye West, was suspended from Twitter yet again after posting a Jewish Star of David with a swastika in the middle.

His account had previously been restricted in October after he posted an antisemitic tweet. His account was restored after new owner Elon Musk took over the social media platform. Ye's account lasted just two weeks before being banned again.

"I tried my best," Musk tweeted. "Despite that, he again violated our rule against incitement to violence. Account will be suspended."

Following the ban, Ye started posting screenshots to Truth Social revealing the text exchanges between him and Musk.

"Sorry, but you have gone too far," Musk wrote. "This is not love."

Ye responded: "Who made you the judge."

Musk then quoted the first part of the Lord's Prayer, to which Ye replied, "I'm Jesus name," and posted a screenshot of a notice that showed his account being suspended for 12 hours.

The feud ended with Ye posting an unflattering topless photo of Musk being hosed down by Endeavor CEO Ari Emanuel.

"Let's always remember this as my final tweet," he wrote. "That is fine," Musk replied, adding "this is not," in response to the swastika post.

Musk's tweet came after made a big show of reinstating former President Donald Trump's account and other users that had been suspended for violating content moderation policies.

Hours before the incident occurred, Ye appeared on the far-right conspiracy-theory outlet InfoWars, where he praised Adolf Hitler and defended the Nazis.

When InfoWars host Alex Jones tried to steer the conversation in a different direction, Ye continued to highlight his support for Nazis.

"They did good things too," Ye said. "We've got to stop dissing the Nazis all the time."

He continued to make other antisemitic remarks and attacks on Jewish people. When discussing the genocidal German dictator, he said he saw "good things about Hitler."

"Every human being has value that they brought to the table, especially Hitler," Ye said.

The Republican Jewish Coalition released a statement while Ye was still being interviewed on the show.

"Given his praise of Hitler, it can't be overstated that Kanye West is a vile, repellent bigot who has targeted the Jewish community with threats and Nazi-style defamation," the statement said.  "Conservatives who have mistakenly indulged Kanye West must make it clear that he is a pariah. Enough is enough."

His campaign aide and white supremacist Nick Fuentes also accompanied him on the show and joined Ye last week when the rapper dined at Mar-a-Lago with former President Donald Trump.

Trump received an avalanche of criticism for dining with the Holocaust denier, who participated in the 2017 Charlottesville rally. Several Republicans even denounced their dinner together.

After Ye's appearance on the show, the conservative social media site Parler announced that the rapper's deal to purchase the platform was quietly killed last month.

"In response to numerous media inquiries, Parlement Technologies would like to confirm that the company has mutually agreed with Ye to terminate the intent of sale of Parler," the company said on Twitter. "This decision was made in the interest of both parties in mid-November."

A Parler spokeswoman told The Washington Post that Ye's deal had been terminated "mainly due to his recent and well-publicized business difficulties."

In recent months, Ye has lost several lucrative deals, including partnerships with Gap and Adidas, for making a series of antisemitic comments. He was also banned from Instagram for similar reasons.

Ye had agreed to buy Parler for an undisclosed amount, the company announced in October.

The right-leaning social app gained popularity after the 2020 presidential election but faced criticism for its involvement in the Jan. 6 insurrection at the Capitol.

"Ye is very concerned about Big Tech censorship," Farmer said."He has the means and wherewithal to obviously move into this space quite aggressively."