My research reveals clear links between white supremacist attitudes and support for the Jan. 6 insurrection 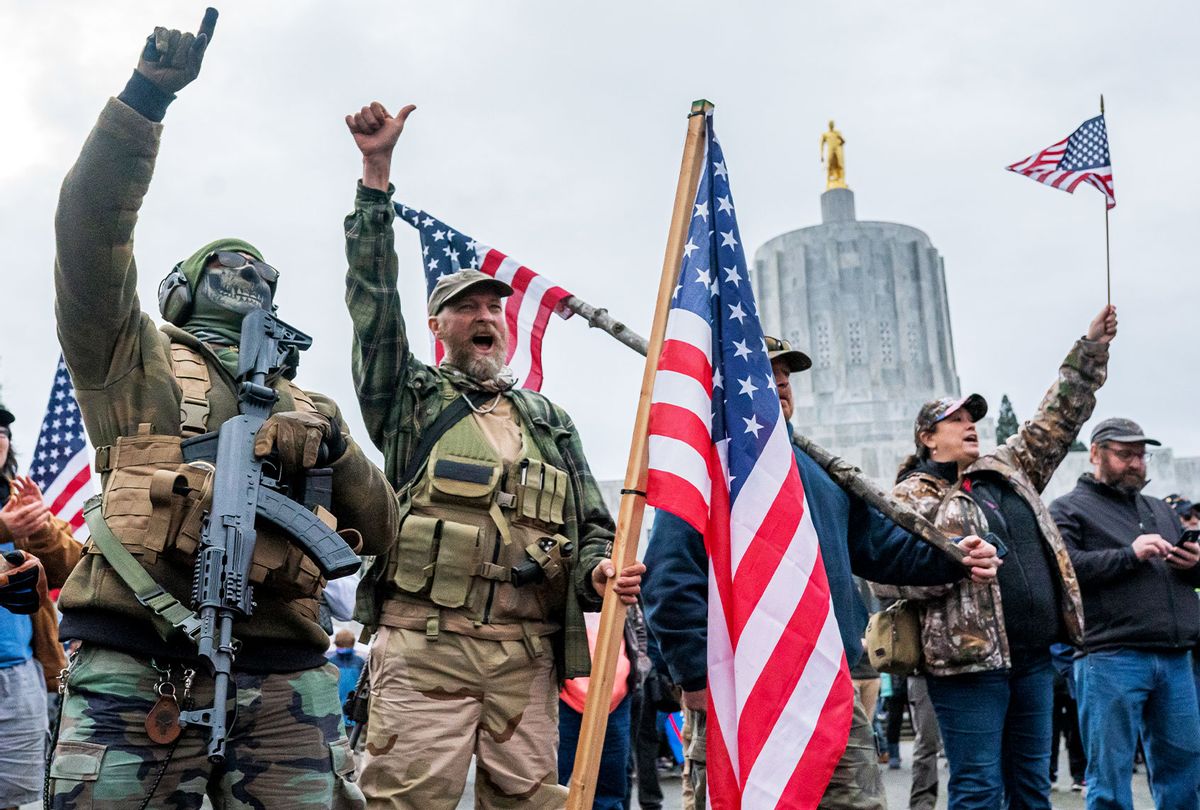 As we move closer to the two-year anniversary of the Jan. 6, 2021, Capitol assault, and as the House select committee investigating that event moves toward completing its work, it is worth reflecting on the gravity of Jan. 6 for the future of American democracy. National discourse on the insurrection is notable for omitting a sustained discussion of white supremacy as a primary motive for many Americans who are sympathetic to the Jan. 6 insurrectionists. Academics are generally reluctant to describe one of the two major U.S. political parties as being motivated by white supremacy, expressed in the Republican effort to overturn the results of the 2020 presidential election.

A search of Google Scholar reveals that there has not been a single academic study of the American public at large exploring the proposition that many people, like the Jan. 6 participants themselves, may be embracing the insurrection due to white supremacist concerns. A Nexis Uni review of the nation's "paper of record" – The New York Times – finds not a single story referencing "white supremacy," "white nationalism" or "white nationalist" politics and Jan. 6 in relation to mass opinion in the last two years.

As I document in my book, "Rising Fascism in America: It Can Happen Here," there is little question that white supremacist politics were a significant factor in the Jan. 6 insurrection. Neofascist, white supremacist and other extremist groups like NSC-131, the Proud Boys, the Oath Keepers, 3 Percenters, the Groyper Army, QAnon and various neo-Confederates played a visible role in the Capitol attack. The neofascist right is also driven by white supremacist politics in their efforts to mainstream "great replacement theory," which warns that the U.S. has undertaken a "white genocide" through liberal immigration laws aimed at the eventual replacement or elimination of the country's white majority.

The Republican Party became increasingly radicalized under Donald Trump. Whether it was his attacks on Muslims and Mexicans or Latin American immigrants, his reference to white supremacists in Charlottesville as "very fine people," his opposition to the removal of Confederate monuments, his attack on NASCAR for banning the Confederate flag, his not-so-subtle embrace of eugenics, his courting of the Proud Boys, his embrace of QAnon (a conspiracy theory that incorporates antisemitic blood libel propaganda), his support for white supremacists and neofascists on Jan. 6, or his hosting of overt antisemites like Kanye West and Nick Fuentes, Trump routinely normalized white supremacist politics. The fact that academics and journalists have refused to connect the dots by asking how deeply Trump's white supremacy connects with a larger public in relation to J6 is a stark sign of the denialist impulse in American political culture. We live in a country that has long embraced an American exceptionalist notion that the country is moving beyond or has transcended race, or at the very least that Americans by and large do not indulge in racial hatreds.

But there's ample reason to suspect that the white supremacy embraced on Jan. 6 resonates with much of the mass public, particularly on the reactionary right. A 2018 University of Virginia poll found that 31 percent of Americans agreed that "America must protect and preserve its White European heritage." A 2019 Associated Press poll found that 22 percent of Democrats and 51 percent of Republicans felt that "a culture established by the country's early European immigrants" is "important" "to the United States identity as a nation." These sorts of questions serve as proxies for the mainstreaming of white supremacist views, even as the vast majority of Americans do not actively identify with "white nationalism" when asked by pollsters.

I wanted to get to the bottom of the white supremacy question as it relates to the mass public and Jan. 6. Working with students in my course at Lehigh University, "The Politics of Rightwing Extremism," we designed a number of survey questions that were implemented through the Harris polling group. Contacting a nationally representative sample of 2,029 Americans from Oct. 20 to 25 of this year, we were able to gauge mass opinion on attitudes that are relevant to white supremacy and Jan. 6. Americans were asked the extent to which they agreed or disagreed with the following assertions.

Neither question is a direct measure of support for extremism. It's entirely possible that many Americans who support preserving European cultural history also support preserving the historical contributions to American culture from other ethnic groups. Furthermore, there are likely many Americans who fall into "Big Lie" propaganda about imagined voter fraud in 2020 and who are sympathetic to the insurrectionists, but who do not support the violence they committed on Jan. 6.

Our results are deeply concerning: 66 percent of poll respondents potentially fall within the orbit of white supremacy, and 49 percent agree that Jan. 6 insurrectionists had legitimate grievances.

The above questions are better understood as measuring those who potentially fall into the orbit of defending white supremacy and Jan. 6. Not every person who answers "agree" to these questions will be a white supremacist or an insurrection supporter. But it's likely that most or all white supremacists will agree with positions advocating the preservation of European culture and expressing sympathy for Jan. 6 rioters and their embrace of white supremacy.

The results from our survey questions are deeply concerning regarding the charge that white supremacist and insurrectionist politics have been mainstreamed in America via rising acceptance of "great replacement" theory. Sixty-six percent of the Harris poll's respondents potentially fall within the orbit of white supremacy by agreeing "somewhat" or "strongly" that the U.S. must "protect" the "culture established by America's early European immigrants" from being assaulted. Forty-nine percent of survey respondents agreed that the Jan. 6 insurrectionists had legitimate grievances about voter fraud and "their democracy being stolen from them." These results should not be surprising in a nation with a long history of embracing white supremacy, and in which modern leaders like Trump re-mainstream these values.

Our question about protecting American culture "from those who might try to diminish it" represents an important phrasing. It implicitly speaks to an underlying fear on the right that "real" white Americans are being "replaced" by people of color — particularly immigrants from Muslim-majority countries, Africa and Latin America. A connection between susceptibility to white supremacy and susceptibility to support for Jan. 6 would go a long way toward establishing that many Americans are thinking about insurrection politics through the lens of mainstreamed white supremacy and Great Replacement Theory. This is precisely what we found with the Harris survey. Those potentially falling within the orbit of white supremacy were much more likely to think the Jan. 6 insurrectionists had legitimate grievances (62 percent agreed), compared to those who did not demonstrate susceptibility to white supremacist politics (24 percent). This is a large difference of 38 percentage points.

Utilizing a scientific tool called regression analysis, I measured whether the relationship susceptibility to white supremacy and sympathy with Jan. 6 is statistically significant, after controlling for other factors, including respondents' gender, age, income, race, education, political partisanship (Democrat vs. Republican), ideology (liberal vs. conservative), geographic location and other measures of economic status, including homeownership and employment status. Including such economic variables in this analysis is important, since commentary and analysis after Jan. 6 was quick to associate insurrectionist politics with feelings of economic insecurity and desperation among the Jan. 6 participants, although academic research also pushed back against this narrative.

My analysis finds that sympathy for the Jan. 6 insurrection has little to do with economic insecurity. Poorer rural Americans, poorer whites and poorer rural whites are not significantly more likely to sympathize with the Capitol rioters.

Controlling for all the above factors, my statistical analysis finds that mass sympathy for the Jan. 6 insurrectionists has little to do with economics or insecurity. Lower levels of education, lower incomes, not owning a home and being unemployed are not significantly associated with sympathy toward the Jan. 6 attack. Neither are race, gender or geographic location (for rural Americans). A closer look at intersecting factors also demonstrates that sympathy for Jan. 6 doesn't appear to be a function of economic insecurity among disadvantaged whites. My analysis shows that poorer rural Americans (making less than $50,000 a year), poorer whites and poorer rural whites are not significantly more likely to sympathize with the Jan. 6 insurrectionists.

Certain groups of people, however, are significantly more likely to sympathize with Jan. 6. This includes younger Americans, conservatives, Republicans and those who are susceptible to white supremacy via their support for protecting "a culture established by America's early European immigrants from those who might try to diminish it." Looking at ideological factors, my statistical analysis reveals that, controlling for all the other factors in this study, being a Republican (as opposed to a Democrat) is associated with an 11 percent increased likelihood of sympathizing with the Jan. 6 insurrectionists, while being a conservative (as opposed to being liberal) is associated with a 14 percent increased probability. The white supremacy question is the most powerful and significant factor in my analysis, with those who are susceptible to white supremacy being 26 percent more likely to identify with the Jan. 6 insurrectionists.

The simplest explanation for the above findings is that white supremacist attitudes have been mainstreamed in relation to Trump's effort to implement a coup on Jan. 6, 2021. A plausible interpretation of Jan. 6 is that the insurrection was seen by millions of (mainly) right-wing Americans as a last-ditch effort by the most militant wing of Trump's base to impose him for a second term, and that people who are sympathetic to that insurrection share the assumption that white America and its "culture" are under threat as the country slowly shifts toward becoming a white-minority nation.

These findings are damning not only because of what they say about the persistence of racism in America, but because they have been so consistently suppressed in an academic and media culture where discussions of white supremacy are almost completely divorced from discussions of public opinion regarding Jan. 6. The second anniversary of the insurrection offers an important opportunity to address this deficiency by acknowledging how far the "great replacement" theory and white supremacy have been mainstreamed in Trump's America. Until we recognize what is really driving right-wing insurrectionist politics, it will be difficult, if not impossible, to confront it honestly.

research and analysis from Anthony DiMaggio