Who are the vaccine holdouts? America's real COVID divide might not be what you think

Are the unvaccinated mostly Republicans, evangelicals and Fox News viewers? I crunched the data: The answer is no 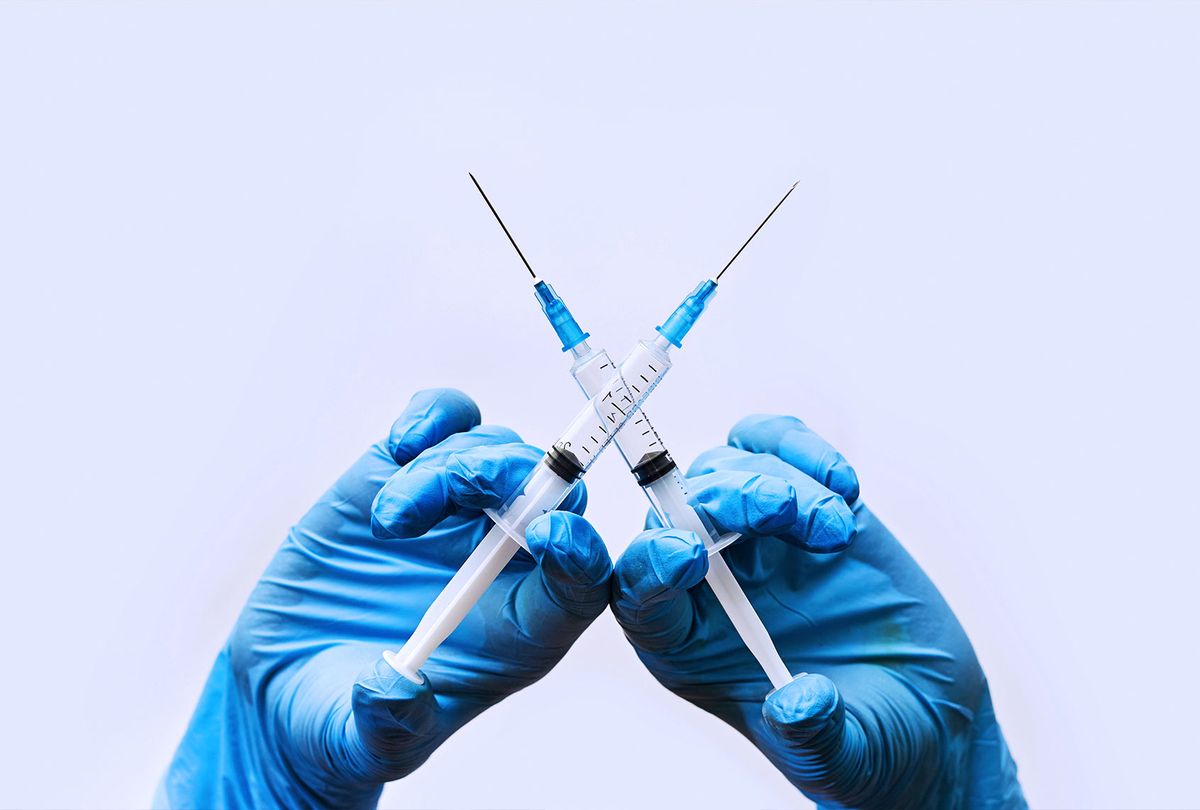 The dramatic rise of the omicron variant has renewed medical experts' warnings about the need for Americans to start taking the pandemic more seriously. Considering the generally low levels of vaccination in the U.S. relative to other wealthy countries, the CDC recommends that all Americans get vaccinated as the best means of protecting against severe illness from the variant, which has quickly overtaken delta as the dominant COVID strain in the U.S. Reporting from the first week and a half of December found that only 12 percent of new COVID-19 cases were from omicron; alarmingly, that had skyrocketed to 73 percent of new cases by the end of the third week of the month.

America is seriously divided on the vaccination question. And one doesn't have to go far to see headlines emphasizing the partisan nature of anti-vax sentiment. Stories placing partisanship at the center of the conflict are everywhere, with titles like: "Inside the Growing Alliance Between Anti-Vaccine Activists and Pro-Trump Republicans," "Republicans Seize on Federal Vaccine Mandates to Fire Up Their Base and Try to Court New Voters Worried About the Economy" and "The Biggest Divide on Vaccination Isn't Race or Income, But Party — and the Divide is Growing."

These are all large divides between groups — of 20 percentage points or more. But without a careful analysis of the raw data from national surveys, it's not possible to tell how much each factor accounts for the enduring national divide over vaccination. To provide a clearer answer, I undertook an original statistical "regression" analysis of mid-2021 surveys, one a Marist poll, another from Axios — both completed in June — which asked Americans about their vaccination status, while collecting information on other demographic and personal behavioral factors.

For the Axios poll, Americans' political behavior was gauged in relation to their reliance on various media venues, including social media like Facebook and Twitter, the elite agenda-setting press (The New York Times), cable viewership (CNN, MSNBC and Fox News), and broadcast television (ABC, CBS, NBC News), in addition to various demographics, including political party identification, gender, race, education level and income. For the Marist poll, additional demographic factors included religious affiliation (for evangelical Christians) and region of the country.

By statistically "controlling" (in social science terms) for all these factors simultaneously within a regression analysis, I am able to measure the percent likelihood that each variable is associated with being vaccinated or unvaccinated, other factors considered. For example, I can estimate the percent likelihood that age predicts being unvaccinated, moving from the oldest group of Americans — those 60 and older — to younger adults in the 18-29 age group. Or the likelihood that one is not vaccinated based on party identification, Democrat or Republican. Or the likelihood that rising education — from those with a high school degree or less to those with graduate degrees — accounts for vaccine refusal.

The results of this research may surprise those who have been told that the battle over vaccinations is primarily a question of partisanship or, alternatively, is about where someone gets their news. The Biden administration has targeted a "disinformation dozen" of vaccine skeptics operating on social media, and CNN has emphasized that Fox News viewers are more likely to oppose vaccination. In fact, neither those who rely on social media nor those who watch Fox News as their "main source of news" are more likely to be unvaccinated, after controlling for other factors included in my analysis. On the other hand, consumption of various "liberal" media outlets, including CNN and The New York Times, is also unrelated to vaccination status.

In terms of news consumption, only MSNBC and broadcast television act as positive predictors that someone is vaccinated. And even in these two cases, the correlation is not particularly strong: Watching MSNBC and broadcast news is associated, respectively, with a 14 percent and 15 percent increased likelihood of vaccination, after controlling for other factors.

For a fuller accounting of various demographic factors, we need to look to the June Marist poll. Importantly, despite claims that Black Americans are more likely to be vaccine holdouts, this group is not significantly more likely to be unvaccinated, after statistically accounting for other factors. This finding is reinforced by recent polling, such as the Pew Research Center's September poll that found minimal differences between the 70 percent of Black people, 72 percent of white people and 76 percent of Latinx people who report being vaccinated.

Similarly, income, gender and the region of the country where one lives are all not significant in predicting vaccination status. Despite high-profile reporting drawing attention to lower vaccination rates in the South, living below the Mason-Dixon line is simply not relevant in accounting for vaccine resistance. Southern states are disproportionately Republican in their politics, and partisanship appears to be the primary factor at work here. Reflecting this point, my analysis of the Marist poll finds that Republican party affiliation is associated with a 26 percent increased chance of being unvaccinated, controlling for other factors.

Despite academic and journalistic emphasis on vaccine resistance among white evangelicals, this group is only moderately more likely to be represented among vaccine holdouts. Being a white evangelical is associated with only a 10 percent increased probability of being unvaccinated in the Marist poll, compared to other Americans and after controlling for other demographic factors. Similarly, education is only moderately significant as a predictor of vaccination: The least educated Americans (those with a high school degree or less) are about 16 percent less likely to be vaccinated, compared to the most educated Americans (those with graduate degrees).

RELATED: False prophets: When preachers defy COVID — and then it kills them

But there is one factor that accounts, by far, for the largest variation in vaccination rates: age. Recent polling finds large differences between groups based on vaccination status and age, but the results are not what many people might expect. On the one hand, younger Americans are significantly less likely to be vaccinated than older Americans, with movement from the youngest Americans (18 to 29 years old) to the oldest (60+) associated with an astonishing 57 percent increased likelihood of being vaccinated. But this distinction is not because those in the youngest age cohort are disproportionately refusing vaccination, presumably because they feel they are healthy and are not concerned about contracting COVID-19.

My analysis clearly shows that adults under 30 are not significantly more likely, statistically speaking, to be unvaccinated compared to the rest of the public. The difference occurs at the other end, where it is older Americans — those 60 and older — who are far more likely to have sought out vaccination, compared to all other age groups. Taking a closer look at Pew's September polling, an overwhelming 86 percent of Americans 65 and older reported being vaccinated in mid-2021, only a few months after vaccines first became widely available, compared to 73 percent of those 50 to 64, 69 percent of those 30 to 49, and 66 percent of those 18 to 29.

To put this another way, the major story here is not that younger Americans are disproportionately holding out on vaccination, but rather that all age groups except people 60 and older have failed to get vaccinated at the high rates that were necessary (at least before omicron took hold) to achieve "herd immunity" against COVID-19.

It may be comforting or politically convenient to blame the failure to achieve mass vaccination on ideological factors such as partisanship, Fox News socialization or religion (specifically referring to white evangelicals). There's no doubt that Fox News has a history of flirting with anti-vaccine propaganda, while Republican state and local officials have militantly opposed vaccine and mask mandates and evangelical Christians have a long history of viewing evidence-based reasoning with suspicion, in favor of a faith-based worldview often associated with the rejection of science.

It's clear that partisanship and religious faith fuel suspicion of vaccines, and both factors clearly play a role in vaccine refusal. But our nation's vaccination problem runs much deeper than that. The reality is that the U.S. has a widespread anti-vax problem, and lags well behind most wealthy countries in the percentage of adults who are fully vaccinated. If roughly one in four adult Americans under age 60 is unvaccinated, that comes to more than 60 million people, without even counting children younger than 18 who remain unvaccinated for various reasons.

RELATED: How deadly is the omicron variant? Here's what we know

Mass opposition to vaccination is rooted in larger cultural values, such as a tendency to embrace narcissistic ignorance and to discount the advice of medical experts. Tens of millions refuse to come to terms with the gravity of the threat, despite the U.S. closing in on a million people dead of COVID and the prospect that half of those who contract the virus may face "long COVID" symptoms that persist for six months or more — an especially alarming statistic, considering our lack of understanding of what the long-term consequences will be years from now.

The significance of age as the best predictor of vaccine refusal suggests that much of the population, disproportionately concentrated among those younger than 65, have discounted the dangers of COVID-19, viewing it as something that only threatens the elderly. This belief is grossly ignorant, considering that one-quarter of the 800,000 U.S. COVID deaths as of December, or 200,000 people, were people younger than 65. Despite the evident dangers faced by Americans of all ages, anti-vax sentiment persists in the face of the most devastating pandemic in a century — and the prospect that new variants will continue to reduce the efficacy of vaccines and guarantee prolonged viral spread well into the future.