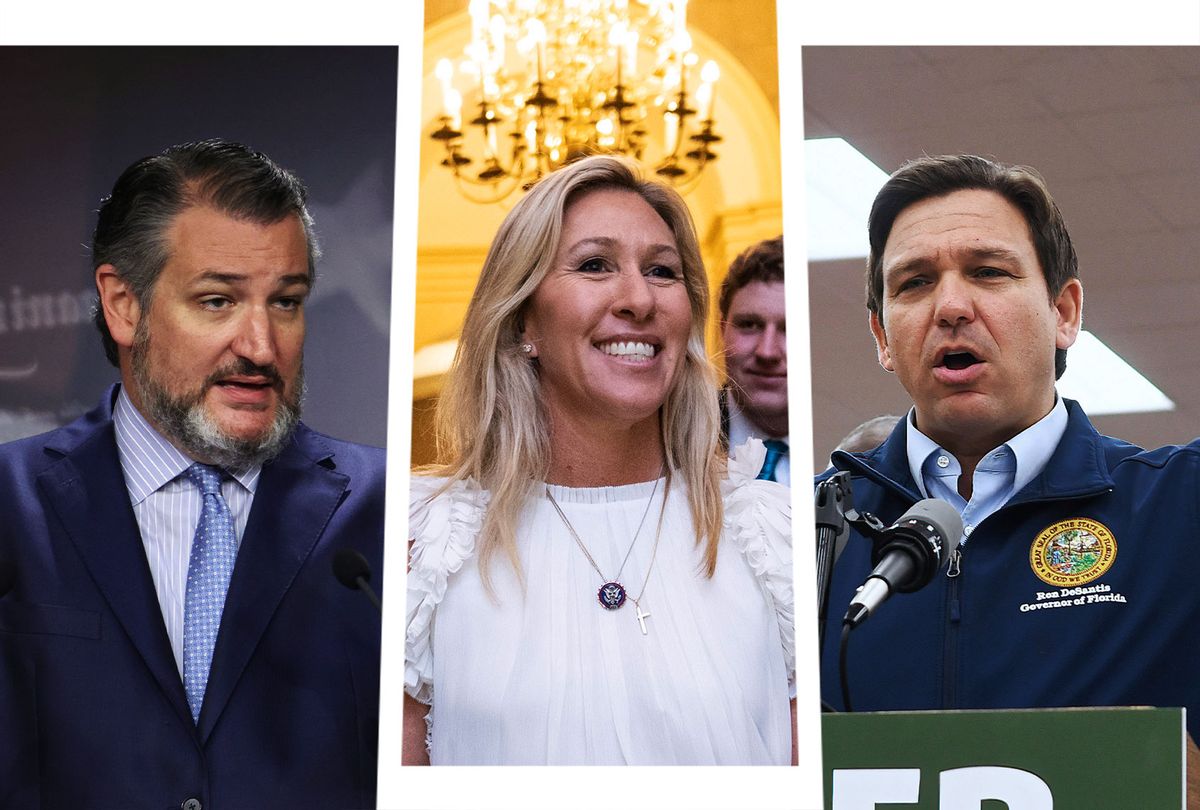 Little is known at this point about the Omicron variant of COVID-19 that is causing worldwide panic and last week's stock market crash — except that it's a reminder of the importance of people getting vaccinated. Vaccination can help prevent such variants from evolving in the first place, and vaccinated people are probably still much safer than unvaccinated people in the face of the variant. As President Joe Biden's office told the press, his top infectious disease advisor, Dr. Anthony Fauci "continues to believe that existing vaccines are likely to provide a degree of protection against severe cases of Covid."

Vaccines save lives and are the best path forward to ending the pandemic and returning to normal. Despite this — or really, because of this — Republicans not only continue to sabotage efforts by the Biden administration to get the public vaccinated, but are doubling down on the sabotage.

As Axios reported Monday morning, the concerted efforts to keep shots from going in arms have escalated in red states, with Republican politicians now openly bribing constituents not to get vaccinated. "Republican officials around the country are testing a creative mechanism to build loyalty with unvaccinated Americans while undermining Biden administration mandates: unemployment benefits," the short piece explains. "Florida, Iowa, Kansas and Tennessee have changed their unemployment insurance rules to allow workers who are fired or quit over vaccine mandates to receive benefits."

Since early spring, a number of commentators — including myself — have been pointing out that Republican politicians and media are deliberately undermining Biden's pandemic response by convincing their base to reject the vaccines. The reason isn't particularly mysterious. Republicans understand that if death rates remain high, the economic recovery remains stagnant, and unpleasant mitigation measures like mask mandates and school shutdowns continue into 2022, a pandemic-weary public is going to start blaming the guy in charge for not doing more to fix the situation.

But still, there are many who simply refuse to believe that Republicans could be that sinister, despite the overwhelming evidence to the contrary.

In August, Jonathan Chait of New York magazine scoffed that "Republican covid denialism is idiocy, not a plot." He continues to insist on this take, tweeting Sunday that to argue otherwise is overrating "the intelligence of the Republican party base." This is an incoherent argument, as Crooked Media editor Brian Beutler pointed out, as it requires believing that gullible people are somehow impervious to manipulation, when "easy to manipulate" is literally what defines gullibility.

But even the New York Times, which has a long-standing habit of refusing to accept the depths of depravity Republicans will sink to, is facing up to this grim reality. Last week, Jonathan Weisman reported that "Republicans have hit on a new line of attack" — blaming Biden for the pandemic — even though it's Republicans who "spent months flouting mask ordinances and blocking the president's vaccine mandates."

Breaking things and then blaming Democrats for things being broken is a long-standing GOP political strategy. It works because, as Paul Krugman of the New York Times recently explained, voters "tend to support the incumbent party when things are going well, oppose it if things are going badly." So, when the GOP is out of power, they do what they "can to make bad things happen," knowing Democrats will be blamed. So it has been on the economy, and so it is on the pandemic.

Now there's a scary new variant that could prolong the pandemic, and many Republicans can barely hide their glee.

Sen. Ted Cruz of Texas continues to bash Dr. Fauci, tweeting on Sunday that he's "an unelected technocrat who has distorted science and facts in order to exercise authoritarian control over millions of Americans," and spreading a repulsive conspiracy theory insinuating that Fauci somehow had a hand in creating the virus. "I'm just going to do my job and I'm going to be saving lives and they're going to be lying," Dr. Fauci said in response to GOP conspiracy theories about him — theories clearly meant to undermine his authority when he continues to advocate for vaccination.

Rep. Marjorie Taylor Greene of Georgia also doubled down on vaccine discouragement in response to the Omicron variant, insisting that the horse deworming drug ivermectin is the real solution. She even encouraged her followers to sue hospitals for COVID-19 deaths because doctors won't prescribe this useless drug. That's the modern GOP in a nutshell: First, get people killed by telling them to refuse vaccines, and then blame the only people who actually tried to save those lives for the deaths.

That this is a deliberate strategy and not just idiocy was confirmed yet again over the weekend through the actions of Rep. Nancy Mace of South Carolina, who gave two separate interviews — one on Fox News and one on CNN — where she offered extremely different claims about the vaccine. For her Fox New audience, Mace claimed "natural immunity gives you 27 times more protection against future COVID than a vaccination." On CNN, while trying to hoodwink the Jonathan Chaits of the world into thinking Republicans aren't that bad, she claimed she wanted people to get vaccinated.

And Donald Trump Jr., always ready to be the sweaty id of the GOP, went on Fox News and praised the anti-vaccine rioters in Europe, claiming they're standing up for "freedom." In reality, it has little to do with freedom and more to do with far-right groups in Europe spreading the same conspiracy theories about the vaccine as the right in America does.

This is the same GOP that has supported Donald Trump despite his attempted coup and instigating a violent riot on the Capitol. Indeed, this is the same party that, inspired by Trump, is rewriting election laws and reorganizing election boards to make it far easier for Trump to succeed when he tries to steal the 2024 election. They care not one bit about this country or its people, just their own pursuit of power. So of course the emergence of a new COVID-19 variant, which could kill way more people, isn't giving them any pause.

The Republican strategy now is what it has been for months: Encourage the base to reject vaccination and to spread COVID-19, with the hopes that a weary public will blame Democrats and punish them at the ballot box in the 2022 midterms. The frightening thing is the GOP's nakedly pro-COVID strategy may very well work, especially if this new variant draws out the pandemic for that much longer.