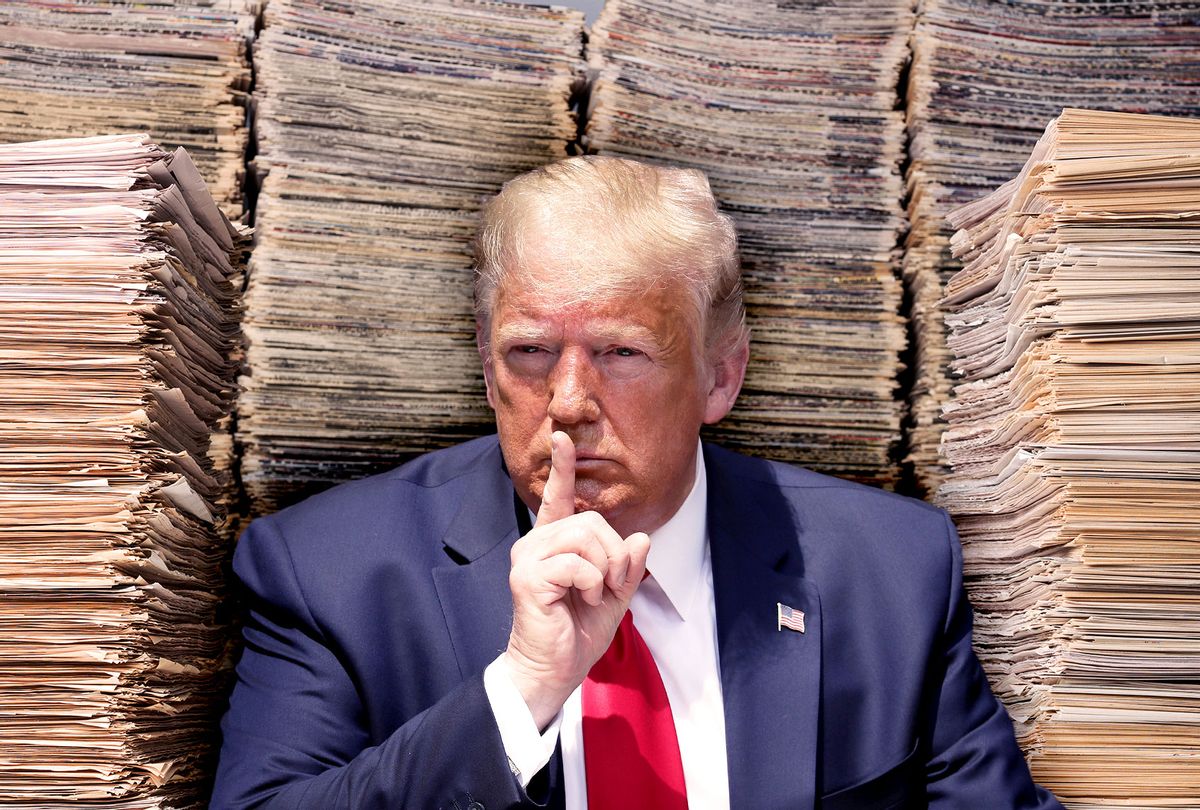 Lawyers for Trump in recent weeks found at least two items marked classified at a storage unit in West Palm Beach after hiring an outside team to search for additional documents, The Washington Post reported on Wednesday. The team conducted at least three searches and the items were "immediately turned over to the FBI, sources told the outlet.

Trump's team misled reporters about the searches, according to The New York Times' Maggie Haberman.

"People close to the former president had insisted earlier Wednesday that no classified material had been found at any of the facilities," which turned out to be false, she tweeted. "One person close to Trump previously insisted he didn't have the storage facility anymore."

"He has the right to remain silent": Legal experts say Trump's Truth Social post may be "evidence"

The search came after a federal judge pressed Trump's lawyers to affirm that he had fully complied with a May grand jury subpoena to turn over all documents marked classified. Trump's lawyers in June attested that he had returned all of the documents but the FBI learned that still had more documents at his Mar-a-Lago residence and seized a trove of national documents during a court-authorized search in August.

There has been a "lengthy and fierce battle" between Trump's team and the DOJ in recent weeks that has been kept under seal by a judge, according to the Post, but the issue appears to be the DOJ's concerns about Trump's team monthslong failure to comply with the May subpoena.

Emails released by the General Services Administration show that the agency helped rent the storage unit in July 2021 to store items from a Northern Virginia office Trump's team used after he left office. A source familiar with the contents told the Post it had a mix of boxes, clothes and gifts.

"It was suits and swords and wrestling belts and all sorts of things," the source said. "To my knowledge, he has never even been to that storage unit. I don't think anyone in Trump World could tell you what's in that storage unit."

Trump's team also hired an outside company to search Trump's golf club in Bedminster, N.J., and at least one other property, according to the report. Trump's lawyers told the DOJ that no other classified items were found at Bedminster or Trump Tower. The search came after Chief U.S. District Judge Beryl Howell told Trump's team to search for more documents in response to DOJ concerns that Trump was still holding on to classified information even after the August search. The Post also reported that officials at the National Archives have expressed similar concerns.

The searches were carried out after Trump's lawyers "sought to avert another federal high-profile search of his properties," a source told the Post.

But legal experts say the discovery of additional documents could prompt additional searches.

"It's truly mind-boggling that even after all the chances Donald Trump has been given, he still has classified documents in his possession," former federal prosecutor Elie Honig told CNN. "DOJ has a difficult decision to make here," he added. "Are we satisfied, after all the misrepresentations, or are we going to have to take even more drastic measures, and perhaps execute search warrants at other properties?"

Some Trump allies believe another search warrant might be executive, according to The New York Times, but a source familiar with discussions among federal officials told the outlet there was "no recent probable cause" to obtain a warrant for Bedminster or Trump Tower.

Legal experts were stunned by the discovery.

"The plot thickens as more criminally mishandled classified documents turn up at yet another venue," wrote Harvard Law Prof. Laurence Tribe. "Trump's skeletons seem to be buried in an ever-expanding array of places."

Former Watergate prosecutor Jill Wine-Banks said Trump "must be held accountable" for failing to comply with the subpoena.

"This reporting is stunning," she tweeted. "Trump's lawyer who said there were no more classified documents looks really bad. The danger to our security is evident."

"It appears that Trump's own team doesn't have a good handle on all the government documents in his possession, despite a criminal investigation," added former federal prosecutor Renato Mariotti. "Astounding."