“She is scared about her reelection”: Kyrsten Sinema ditches Democrats and registers as independent 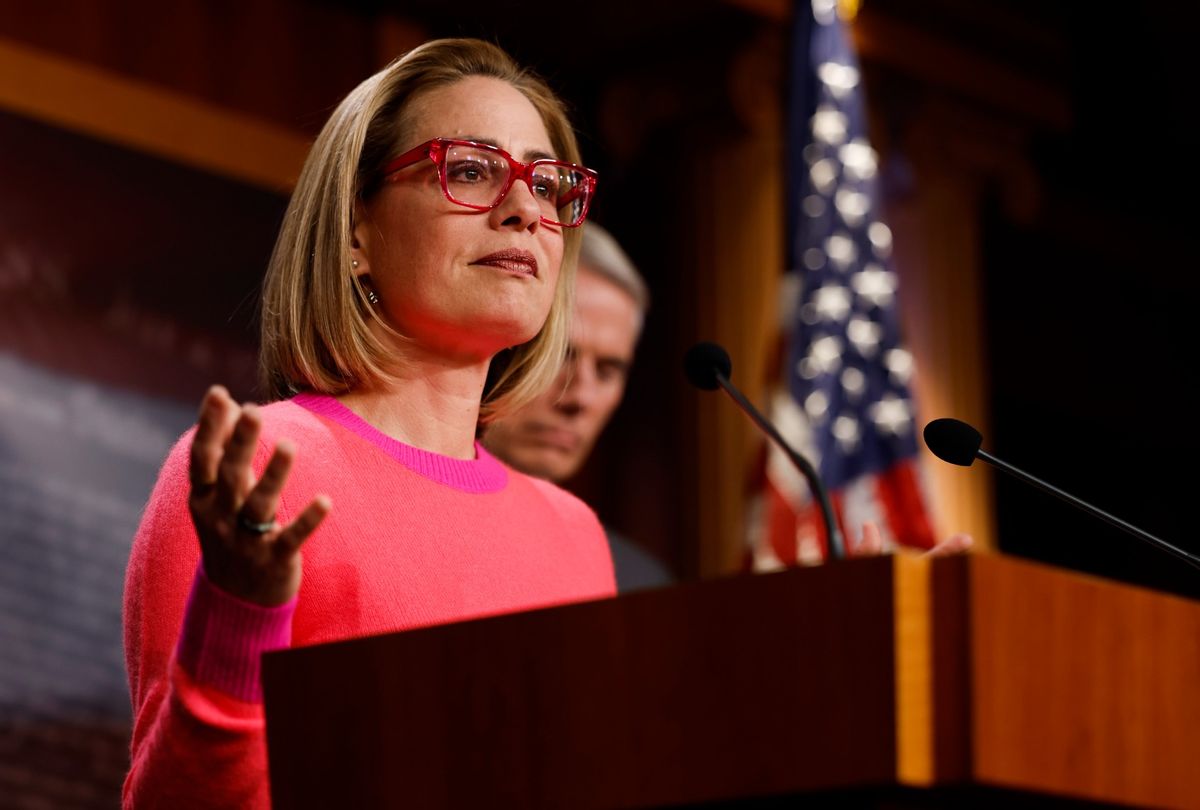 Sen. Kyrtsen Sinema speaks at a news conference after the Senate passed the Respect for Marriage Act at the Capitol Building on November 29, 2022 in Washington, DC. (Anna Moneymaker/Getty Images)
--

Arizona Sen. Kyrsten Sinema announced on Friday she is leaving the Democratic Party and registering as an independent.

Sinema told Politico days after Democrats won their 51st seat in the Senate that she is changing her party affiliation but will not caucus with Republicans. Unlike Sens. Bernie Sanders, I-Vt., and Angus King, I-Maine, Sinema does not plan to attend weekly Democratic Caucus meetings, though she rarely does that now, according to the report. And she is not sure whether her desk will remain on the Democratic side of the Senate floor — but said she expects to keep her committee assignments through the Democrats despite leaving the majority party.

Sinema, who repeatedly blocked key pillars of the Democratic agenda and drew backlash from her party as she cozied up to big corporate donors, insisted that she still plans to vote the same as she has during her first four years in the Senate.

"Unpopular view": McConnell gushes over Sinema as she pushes to hand GOP even more filibuster power

Sinema denied that she was waiting for the results of the Georgia Senate runoff to make the announcement, telling Politico that it is "less about the timing" and more about "thinking how can I be most productive."

Sinema's decision is not expected to significantly change the dynamics of the Senate majority but it does impact her potential re-election campaign. Rep. Ruben Gallego, D-Ariz., and others have talked about launching a primary challenge against Sinema over her opposition to corporate tax hikes and filibuster reform, which derailed Democratic efforts to pass ambitious social programs, voting rights protections and other legislation sought by the majority of the party.

"She is scared about her reelection race and she puts Chuck in a tough position," an anonymous top national Democrat told CBS News' Robert Costa.

Sinema, who has not said whether she intends to run again, told Politico that she is on separating herself from a party that's never been a fit rather than focusing on 2024.

"Politics and elections will come later," she said, though she did add that "I am not running for president."

It has been more than a decade since the last Senate party switch, when Pennsylvania Sen. Arlen Specter left the Republican Party to join the Democrats in 2009. Connecticut Sen. Joseph Lieberman previously left the Democratic Party and became an independent in 2006.

Sinema's close relationship with Senate Minority Leader Mitch McConnell, R-Ky., became a point of contention during her opposition to President Joe Biden's signature agenda items. Politico noted that she also maintains a relationship with House Republican Leader Kevin McCarthy, R-Calif., and has already connected with other Republicans about working together.

With the Democrats still maintaining a working majority in the Senate, Sinema's move is not expected to change much given that she helped derail key Democratic priorities already. But it could impact whether she is still in the Senate after 2024.

"In Vermont and Maine Ds agree not to run a candidate against Sanders and King. That is almost certainly not going to happen in Arizona. Sinema was facing the increasing likelihood of a primary she would likely lose," wrote the Talking Point Memo's Josh Marshall. "If that's so, it seems vanishingly unlikely that [Democrats] would choose not to run someone. So it's a three person race. In a closely divided state there's a very good chance that gives the seat to the GOP. But … there's an even better chance that Sinema is a distant 3rd."

That's a significant risk since. NBC News' Marc Caputo noted that the Republican in the race could very well be far-right election denier Kari Lake, who narrowly lost her gubernatorial bid last month.

Sinema could use that threat to her advantage.

"If she runs for re-election as an independent, this would mean rather than being primaried out, Sinema would challenge Dems to support her, saying that they would otherwise be electing a Republican in a 3-way race," tweeted Matt Grossmann, a political science professor at Michigan State University. "This would also make needing strong campaign finance support from a few private-equity folks a bit more plausible."

Still, Sinema's poll numbers show that she faces an uphill climb in any reelection contest.

"Sinema was not very popular with anyone," tweeted FiveThirtyEight's Nate Silver, "I'm not sure whether today's move increases or decreases her chances of winning another term (I actually suspect decreases) but they were low to begin with and they remain low."