Sinema says she won’t negotiate publicly. But Democratic leaders say she's not negotiating in private either 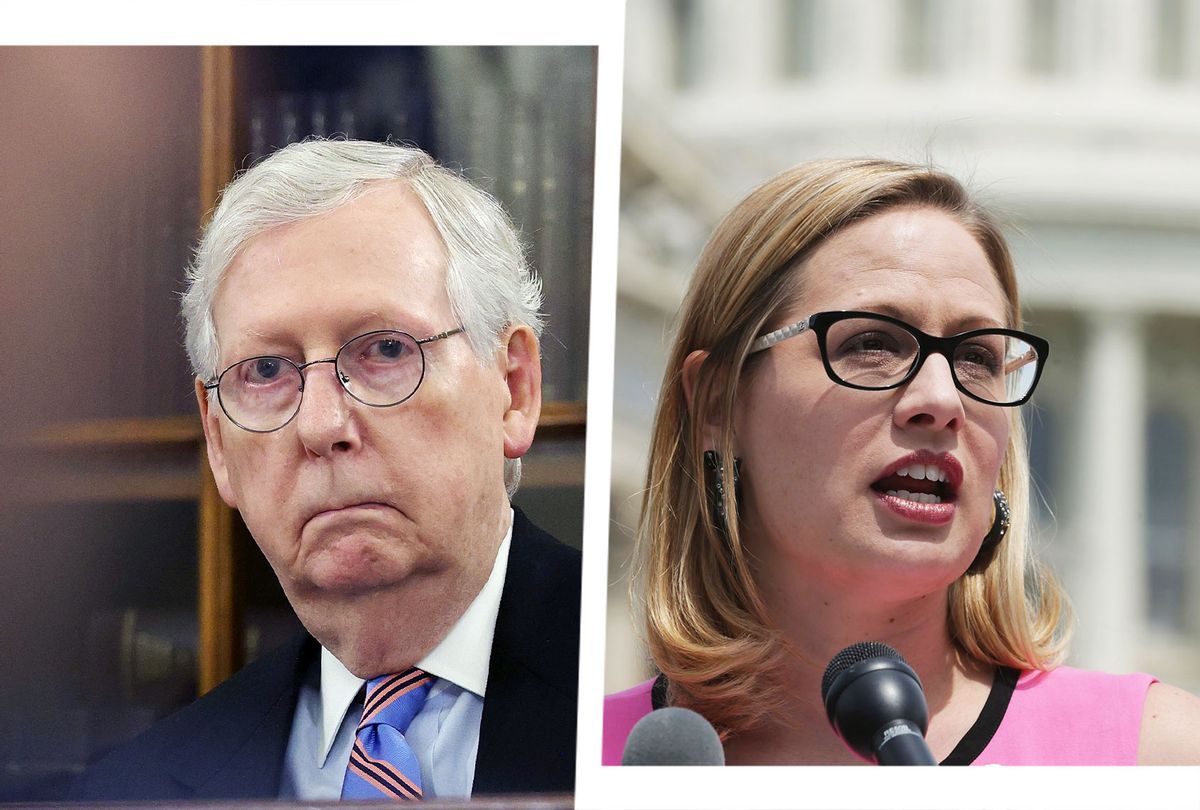 President Joe Biden is frustrated that Sen. Kyrsten Sinema, D-Ariz., is refusing to budge in negotiations on his Build Back Better plan and won't even return his calls, according to CNN.

Biden has complained to lawmakers that the two senators "don't move" from their positions and has even "contended that Sinema didn't always return calls from the White House," sources told CNN's Manu Raju.

Sinema and her aides have repeatedly said that she would not negotiate publicly. Democratic leaders are also rankled that she doesn't appear to be negotiating much in private either. Sinema's office says she has been clear about her demands, but Senate Budget Committee Chairman Bernie Sanders, I-Vt., complained on Wednesday that Sinema refuses to tell Senate colleagues what exactly she would support in the bill.

"Sen. Sinema's position is that she doesn't quote-unquote negotiate publicly," Sanders said during a news conference. "I don't know what that means. We don't know where she's coming from. Tell us what you want."

Sinema has faced growing criticism from constituents and even the threat of a Democratic primary opponent over her refusal to support Biden's signature bill. Although she told lobbyists earlier this year that "senators need to hear from their constituents," activist groups now say Sinema has ignored the "Black, brown, and indigenous communities who elected her." The New York Times reported that Sinema has "effectively cut off communication with the local progressive groups that worked to elect her in 2018."

Sinema was heckled by protesters while teaching a class at Arizona State University last week and later confronted in a campus restroom, which Democratic leaders have condemned. But Sanders refused to sign a joint statement condemning the protesters because it did not include a condemnation of Sinema's stance on the bill, according to emails obtained by Axios.

Sinema, who is a leading recipient of donations from the pharmaceutical industry and corporations and industry groups lobbying to defeat Biden's bill, reportedly opposes the Democrats' proposal to allow Medicare to negotiate lower prescription drug costs — even though she campaigned on that issue in 2018. She also reportedly opposes tax increases on corporations and wealthy individuals (despite previously calling for them to "pay their fair share").

Despite complaints from fellow senators, her constituents, and now the president that she appears unwilling to negotiate, Sinema has found time amid this legislative battle for Biden's agenda to meet with business lobby groups that are eager to kill the Build Back Better legislation.

Last month, Sinema charged members of business groups opposed to tax hikes up to $5,800 per person to attend a 45-minute fundraiser. Last week, she flew from Washington back to Arizona, with a spokesman saying she had an important medical appointment to treat a foot injury. The New York Times reported that she was also scheduled to attend a fundraising "retreat" with donors at a high-end resort and spa.

Amid her standoff with her own party, which has caused her poll numbers to plummet, Sinema has gotten the backing of a pharma-funded group, the U.S. Chamber of Commerce and even Senate Minority Leader Mitch McConnell.

McConnell has urged fellow Republicans to praise Sinema publicly and privately assured his party earlier this year that Sinema would successfully block Biden's proposed tax increases on corporations and the wealthy.

Sinema's bizarre positioning has bewildered Democrats in her state, where she is apparently trying to craft a new image as a John McCain-style "maverick." But while her support has ticked up slightly among Republicans, it has plummeted among Democrats and independents, according to a recent Morning Consult poll.

"The activists, the people who are going to knock on doors, those guys are done with her," Steven Slugocki, the former chairman of the Maricopa County Democratic Party, told Politico. "Arizona is a rapidly changing state. It is turning blue very quickly. I don't know what her end game is."

Garrick McFadden, the former chairman of the state Democratic Party, said that Sinema should not be labeled a "centrist" but an "obstructionist."

"I don't understand the calculus," he told Politico. "It's not like we're asking her to do the Bernie Sanders or the Elizabeth Warren agenda. It's the Joe Biden agenda."