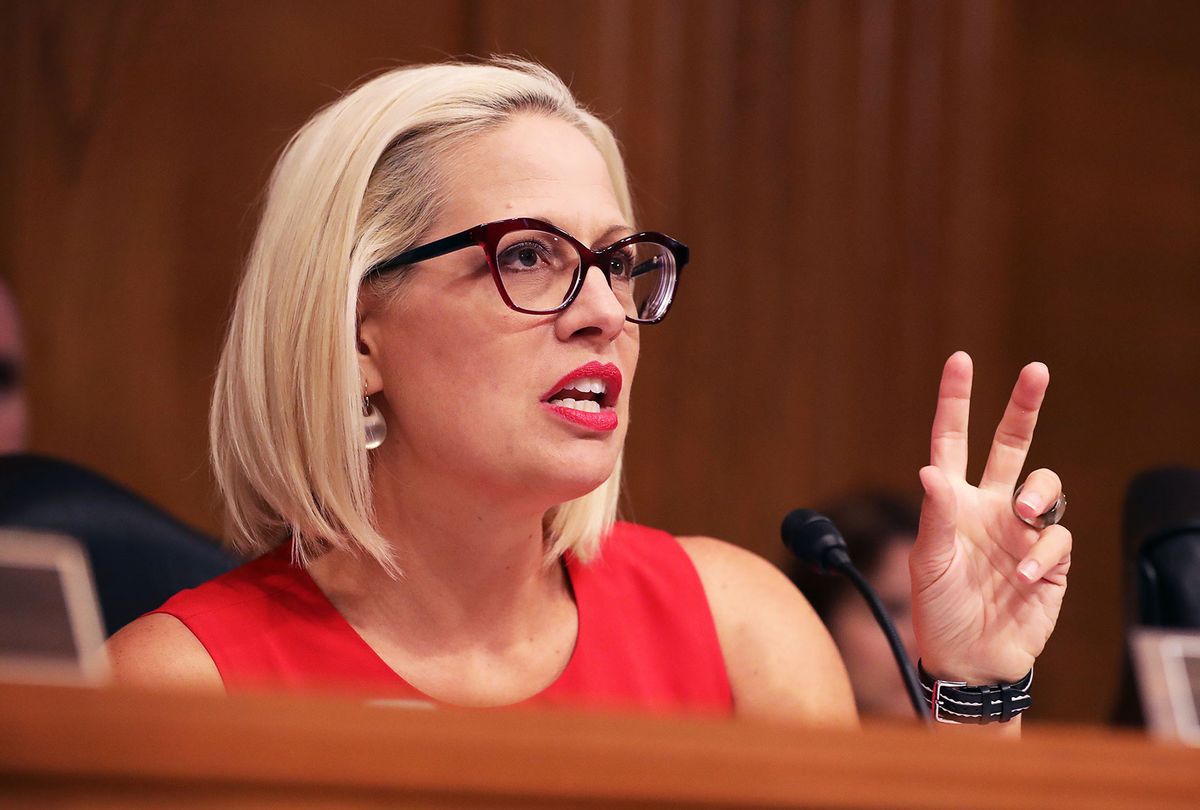 This article has been updated to clarify that Marois left Chase over the summer.

A former senior aide to "centrist" Sen. Kyrsten Sinema, D-Ariz., worked until recently as one of the top lobbyists for JPMorgan Chase, the largest U.S. bank and a leading opponent of President Biden's proposed corporate tax increases — which Sinema also opposes.

Sinema's refusal to endorse Biden's Build Back Better plan over its $3.5 trillion price tag has emerged as a major obstacle to Biden's agenda. Sinema, a former Green Party member who campaigned on lowering drug prices and previously called for big corporations and the rich to "pay their fair share," has also balked at Democrats' plan to lower prescription drug costs and increase taxes on the wealthy and large companies, amid a massive lobbying blitz by corporations and industry groups aiming to torpedo the bill.

Sinema's former legislative director and senior policy adviser, Alyssa Marois, left her office to lobby on behalf of JPMorgan Chase, a gigantic investment bank and holding company with more than $3.6 trillion in assets, which according to the Financial Times is the world's largest lender to the fossil fuel industry. The bank has donated $47,500 to Sinema's campaign and related PACs, and has been one of the leading critics of Biden's proposed corporate tax hike.

Marois was listed last year as vice president of federal government relations for the bank and the government relations manager for the company in its latest Federal Election Commission filing. A spokesperson for Chase said Marois left the job over the summer. The job involves developing "relationships with key policymakers," coordinating with "industry trade associations to maximize effectiveness," and building industry coalitions on "matters of shared interests." The position is part of JP Morgan Chase's Government Relations and Public Policy Group, which the bank says "directs our company's political spending."

JPMorgan Chase has spent more than $1.3 million on lobbying on "corporate tax issues" and other matters between the first and second quarter this year, according to its lobbying disclosures.

Marois herself has actively lobbied on several issues where the banking industry is at odds with the Biden administration, according to the disclosures. Among other issues, she lobbied the Senate and House on financial issues related to bank structure, capital requirements, "examination and enforcement issues" and other bank regulation matters. During the past few months, the banking industry has escalated its fight against proposed regulations in the Build Back Better plan to increase IRS enforcement of wealthy tax cheats. Banks are pressuring lawmakers to drop a plan to require them to report transaction data to the IRS to help crack down on tax avoidance.

JPMorgan Chase was a major beneficiary of the Republican tax cuts signed by Donald Trump in 2017, which slashed the corporate tax rate by 40%. The bank saved $8.7 billion in 2018 and 2019 on its IRS bill, according to Bloomberg. Trump even urged a senior JPMorgan executive to "thank him" for the newfound profits during a meeting, the outlet reported.

Biden has proposed raising the corporate tax rate to 28%, well below the 35% it was before the Trump tax cuts. JPMorgan Chase CEO Jamie Dimon earlier this year called the proposed tax increase a "little crazy" and dismissed Biden's plan to raise the top capital gains tax rate to nearly 40%. Dimon sits on the board of directors of the Business Roundtable, which includes the CEOs of some of the country's largest companies and has vowed to wage a "significant, multifaceted campaign" to stop the proposed tax increases. The Business Roundtable has praised the Senate's bipartisan infrastructure plan that Sinema helped negotiate but said it is "deeply concerned about potential tax increases on U.S. job creators" in the Build Back Better proposal.

Another longtime former Sinema aide, Kate Gonzales, earlier this year joined the high-end lobbying firm of Brownstein Hyatt Farber Schreck, which brags that its "political connections deliver results" and that former Capitol Hill staffers are among its principals. Gonzales is a member of the firm's Energy, Environment, and Resources Strategies Group, where she "provides insight into Democratic priorities," according to the company. "She is highly skilled at developing compelling messaging for moderate Democrats and Republicans," her bio says. Biden's spending proposal includes numerous measures aimed at tackling climate change and cracking down on energy firms.

Meanwhile, Sinema's current chief of staff, Meg Joseph, used to be a lobbyist at Clark & Weinstock, which has represented Pfizer and other top pharmaceutical companies and trade groups that oppose Biden's proposal to allow Medicare to negotiate the price of prescription drugs.

Pharmaceutical companies and medical firms have donated more than $750,000 to Sinema during her career, including more than $466,000 since she was elected in 2018.

Sinema has also received more than $920,000 from companies and industry groups leading the lobbying blitz against Biden's proposal, according to an analysis from the progressive government watchdog group Accountable.US.

Sinema's office said in a statement on Thursday that the senator has been clear for months that "she would not support a bill costing $3.5 trillion."

"While we do not negotiate through the press — because Senator Sinema respects the integrity of those direct negotiations — she continues to engage directly in good-faith discussions with both President Biden and Senator [Chuck] Schumer to find common ground," the statement said.

Sinema has stonewalled the media in recent weeks, saying little or nothing beyond bland press releases. But she has continued to raise money from business groups that oppose Biden's bill. Accountable.US says campaign contributions from antagonistic corporate interests may explain why Sinema continues to oppose proposals that are overwhelmingly supported by voters both nationally and in Arizona.

Sinema's opposition to Biden's agenda drew a rebuke from the Arizona Democratic Party last week, which threatened to hold a vote of no confidence against her if she "continues to delay, disrupt, or votes to gut" Biden's plan. Activists who helped elect her in 2018 as Arizona's first Democratic senator in decade have launched a crowdfunding campaign to raise money for a potential primary challenger, as Salon first reported on Wednesday. At least two other groups have since launched similar efforts to fund a potential primary challenger as polls show Sinema's favorability among Democratic voters lagging significantly behind fellow Sen. Mark Kelly, D-Ariz.

"With the Biden Build Back Better plan poised to give millions of struggling families a chance to get ahead, there's too much at stake for this process to get mucked up and watered down with typical Washington revolving door corporate influence and money," Kyle Herrig, president of Accountable.US, said in a statement to Salon. "We hope Senator Sinema is ultimately guided by the overwhelming public sentiment in favor of corporations paying their fair share and investments that will build an economy for all, not just billion-dollar businesses."