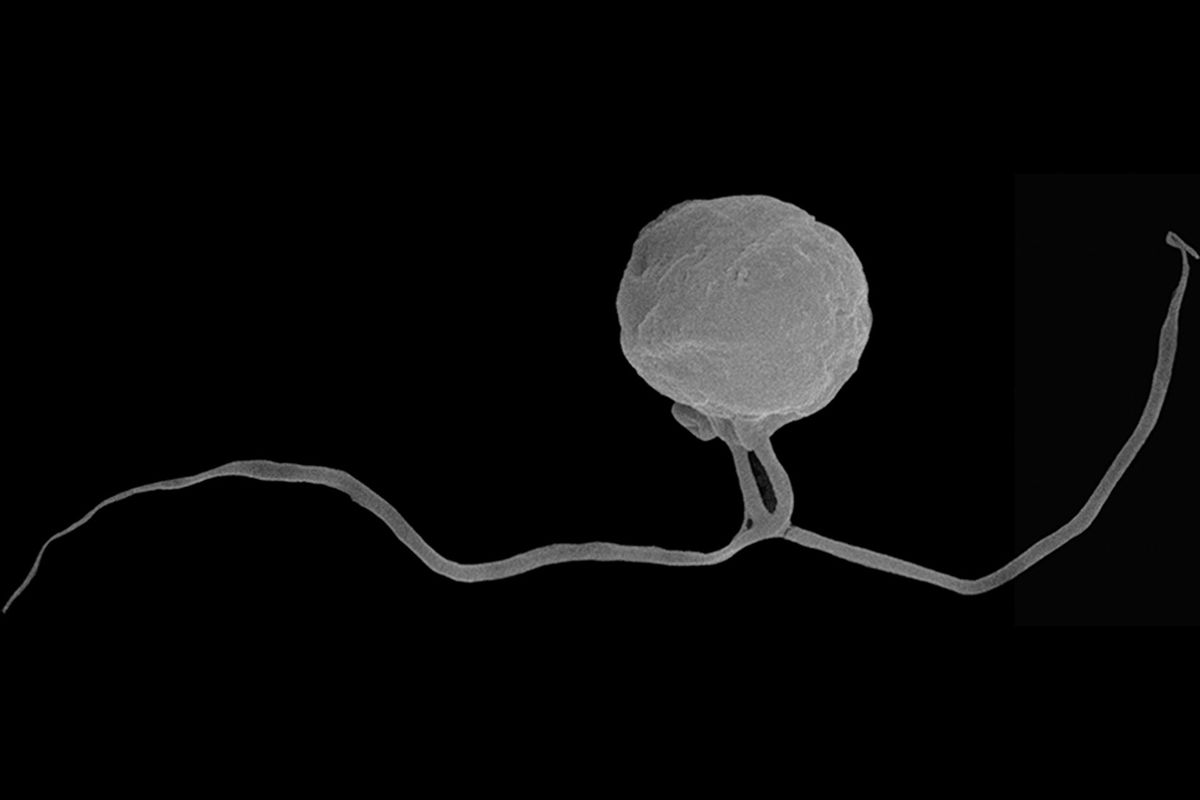 Beware the Nibblerids, for they shall nibble you to shreds. Their name might make them sound like the antagonists in a children's book, but if you're a microbe, nibblerids can be quite scary. These tiny, single-celled organisms are voracious predators that use a tooth-like structure to rip apart their prey bit by bit. They are also, it turns out, occupants of a completely new branch on the tree of life — a novel lifeform quite different, and distant, from any other known living creatures.

"These are lions of the microbial world," Dr. Patrick Keeling, a botany professor at the University of British Columbia, said in a statement. A new analysis by Keeling and colleagues, published in the journal Nature, illuminates some of the strange, violent behavior of the microbial world, explaining why nibblerids are so unique.

All around us, and even inside us, tens of trillions of microbes are locked in endless battle. Bacteria, microscopic fungi, amoebas, tardigrades and other tiny critters have evolved weapons of mass destruction, such as toxins, biofilms and specialized enzymes, in order to wage war against one another.

But despite all this action, humans have relatively little information on who is doing the fighting. There just hasn't been enough research into microbes to really inventory them. Estimates vary, but some research suggests there are literally millions of unknown microorganisms, encompassing multiple uncharted branches on the tree of life that is sometimes described as "microbial dark matter." As we develop better ways of censusing these tiny lifeforms, biologists have seen fit to rewrite huge portions of the tree of life, which is a model of evolution that explains the relationship between all living things — often visualized as a "tree" with different branches. At the base of the tree of life sits the first cell to have ever existed.

"Ignoring microbial ecosystems, like we often do, is like having a house that needs repair and just redecorating the kitchen, but ignoring the roof or the foundations," Keeling said. "This is an ancient branch of the tree of life that is roughly as diverse as the animal and fungi kingdoms combined, and no one knew it was there."

Briefly, taxonomy is the field of science concerned with how we classify living organisms. This hierarchal system is vastly incomplete, controversial and often revised, but it's helpful in naming, defining, and grouping organisms based on their characteristics and evolutionary relationships. It starts broad with three domains: Archaea, Bacteria, and Eukarya, then subdivides into kingdoms, continuing to narrow itself down all the way to species.

By analyzing ten previously undescribed strains of micro-predators, this new paper suggests there should be a new category called Provora.

Humans, for example, are eukaryotes in the animal kingdom and our species name is Homo sapiens. Eukaryotes are such an expansive category that it includes mushrooms, dogs, trees and even protists, which are microscopic, single-celled organisms that don't really fit in the categories of plants, animals or fungi.

But by analyzing ten previously undescribed strains of micro-predators, this new paper suggests there should be a new category called Provora. After running genetic analyses of these microbial predators, it became clear that their genetic differences constituted an entirely new branch of life.

"Provora is an ancient supergroup of eukaryotes that rivals traditional Kingdoms of animals, fungi or plants in terms of antiquity and the level of divergence between its few described members," the authors wrote. That is, when comparing the genomes of the organisms in Provora, it revealed striking diversity, suggesting they are very different from other living things.

There are two main branches of Provora, which contain the nibblerids but also the nebulids, which are about 10 micrometers long and swallow their prey whole. One of these organisms, Ancoracysta twista, was discovered in 2017 on tropical aquarium brain coral by Keeling and others, but it was so weird compared to other microbes that it was considered an "orphan." Now it has a more established spot on the phylogenetic tree, which helps better explain its evolutionary history and position in the web of life. A. twista eats its prey whole using a specialized mouth called a cytosome.

"Nibblerids can also engulf whole prey, but more characteristically feed by a unique behaviour whereby they bite off and ingest a part of a large prey cell by closing their ventral groove," the authors wrote. The groove is a tooth-like projection that sticks out and allows Nibblerids to attack victims that are larger than it. "This feeding mode is unique, and demonstrates how pico-sized flagellates can feed on larger cells, which is often not considered in the modelling of microbial food webs."

When it comes to animals, predators are relatively rare compared to herbivorous species. There are far fewer lions than gazelles. The same general rule exists in the microbe world. Nibblerids and nebulids are also rare.

To find these micro-predators, the researchers sampled water from all over the planet, including coral reefs in Curaçao, the bottom of the ocean, the open sea, in fresh water and in salty, brackish water. In fact, the only place they didn't seem to find these little guys was in soil.

"These predators are globally distributed in marine and freshwater environments, but are numerically rare and have consequently been overlooked by molecular-diversity surveys," the authors report.

Scientists are discovering new species all the time, but it's not often that such discoveries lead to new branches so deep in the tree of life. Because of their size, microbes are often ignored by scientists, but the more we pay attention to them, the more clear it becomes how little we know about this fascinating, microscopic universe all around us.