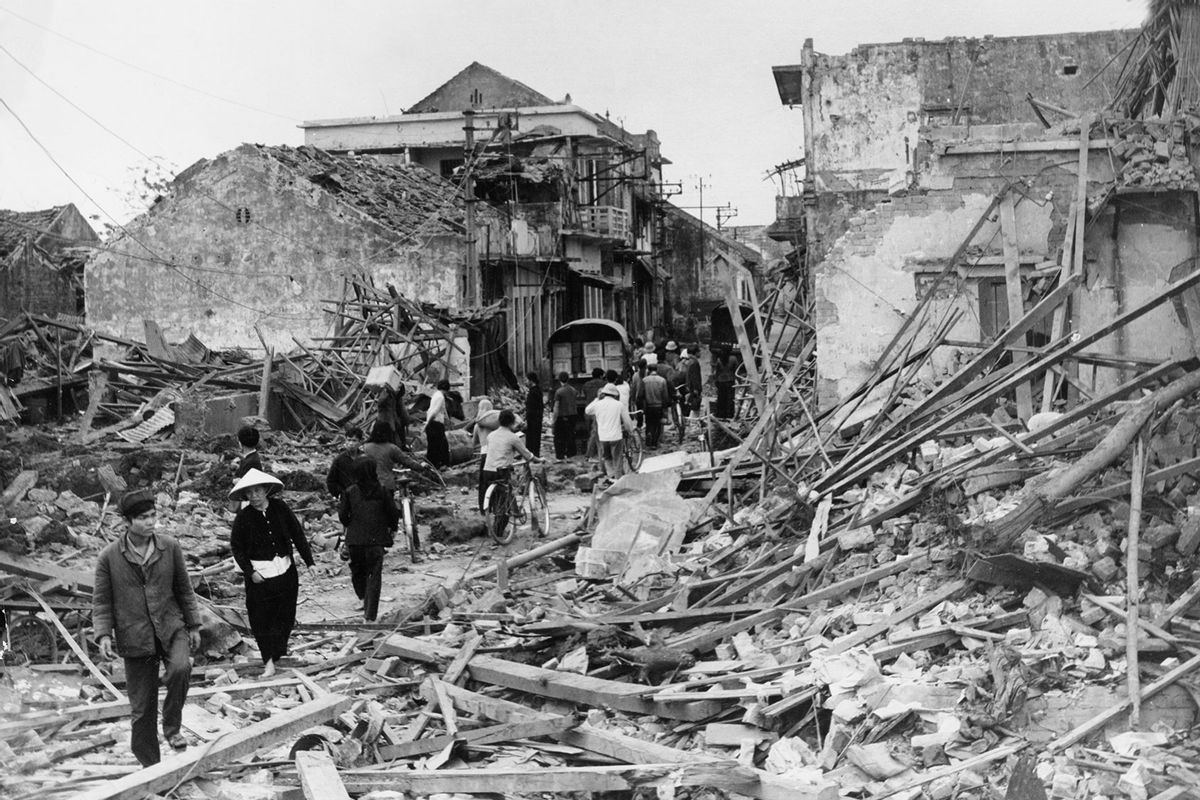 Kham Thien street in central Hanoi which was turned to rubble by an American bombing raid on December 27, 1972. (Sovfoto/Universal Images Group via Getty Images)
--

As Americans head into the holiday season, we also approach a significant historical milestone from the U.S. war in Vietnam: the 50th anniversary of the final U.S. air offensive on North Vietnam, an 11-day campaign that began on the night of Dec. 18, 1972, and has gone down in history as the "Christmas bombing."

What has also gone down in history, however, at least in many retellings, is a provably untrue representation of the nature and meaning of that event, and its consequences. That widespread narrative claims that the bombing forced the North Vietnamese to negotiate the peace agreement they signed in Paris the following month, and thus that U.S. air power was a decisive factor in ending the American war.

That false claim, steadily and widely proclaimed over the last 50 years, does not just contradict irrefutable historical facts. It is relevant to the present, too, because it continues to contribute to an exaggerated faith in air power that distorted American strategic thinking in Vietnam and ever since.

How Vietnam changed me — and changed America

Undoubtedly, this mythical version will appear again in the remembrances that will come with the approaching anniversary. But perhaps that landmark will also provide an opportunity to set the record straight on what really happened in the air over Vietnam and at the bargaining table in Paris in December 1972 and January 1973.

The story begins in Paris in October, when after years of stalemate, the peace negotiations took a sudden turn when U.S. and North Vietnamese negotiators each offered crucial concessions. The American side unambiguously dropped its demand that North Vietnam withdraw its troops from the south, a position that had been implied but not entirely explicit in previous U.S. proposals. Meanwhile Hanoi's representatives for the first time abandoned their insistence that the South Vietnamese government headed by Nguyen Van Thieu must be removed before any peace agreement could be concluded.

With those two stumbling blocks removed, the talks swiftly moved forward, and by Oct. 18 both sides had approved a final draft. Following a few last-minute wording changes, President Richard Nixon sent a cable to North Vietnam's Prime Minister Pham Van Dong declaring, as he wrote in his memoir, that the agreement "could now be considered complete" and that the United States, after accepting and then postponing two earlier dates, "could be counted on" to sign it at a formal ceremony on Oct. 31. But that signing never happened, because the U.S. withdrew its commitment after its ally, President Thieu, whose government had been completely excluded from the negotiations, refused to accept the agreement. That's why the American war was still going on in December, unequivocally as the result of U.S., not North Vietnamese, decisions.

In the midst of those events, Hanoi's official news agency broadcast an announcement on Oct. 26 confirming the agreement and giving a detailed outline of its terms (prompting Henry Kissinger's famous declaration a few hours later that "peace is at hand"). So the earlier draft was no secret when the two sides announced a new settlement in January.

Comparing the two documents shows in plain black and white that the December bombing did not change Hanoi's position. The North Vietnamese conceded nothing in the final agreement that they had not already conceded in the earlier round, before the bombing. Aside from a few minor procedural changes and a handful of cosmetic revisions in wording, the October and January texts are for practical purposes identical, making it obvious that the bombing did not change Hanoi's decisions in any meaningful way.

Given that crystal-clear record, the myth of the Christmas bombing as a great military success has shown remarkable staying power in both the U.S. national security establishment and in public memory.

A telling case in point is the official website of the Pentagon's Vietnam 50th anniversary commemoration. Among many examples on that site is an Air Force "fact sheet" that says nothing about the October draft of the peace agreement or the U.S. withdrawal from that agreement (those are not mentioned anywhere else on the commemoration site, either). Instead, it says only that "as talks dragged on," Nixon ordered the December air campaign, after which "the North Vietnamese, now defenseless, returned to negotiations and quickly concluded a settlement." The fact sheet then states this conclusion: "American airpower therefore played a decisive role in ending the long conflict."

Various other postings on the commemoration site assert that Hanoi's delegates "unilaterally" or "summarily" broke off the post-October talks — which, it should be remembered, were entirely about changing provisions that the U.S. had already accepted — and that Nixon's bombing order was intended to force them back to the negotiating table.

The facts about the Vietnam peace agreement and the U.S. bombing campaign have been known ever since those events occurred, but the mythical version has largely overwhelmed the true story.

In fact, if anybody walked out of the talks it was the Americans, at least their chief negotiators. The Pentagon's account gives a specific date for the North Vietnamese withdrawal: Dec. 18, the same day the bombing started. But the talks actually ended several days before that. Kissinger left Paris on the 13th; his most senior aides flew out a day or so later. A last pro forma meeting between the two sides took place on Dec. 16 and when it ended, the North Vietnamese said they wanted to proceed "as rapidly as possible."

Researching this history not long ago, I was surprised at the extent to which the false narrative appears to have largely overwhelmed the true story. The facts have been known ever since those events occurred, but are remarkably hard to find in today's public record. Searching online for "peace is at hand" or "Linebacker II" (the codename for the December bombing), I found plenty of entries that state the same misleading conclusions that appear on the Pentagon's commemoration site. I had to look a lot harder to find sources that mentioned any of the documented facts that contradict that mythical version.

It may be too much to ask, but I write this in the hope that the coming anniversary will also provide an opportunity for a more careful look back at a significant turning point in an unsuccessful and unpopular war. If historians who value truth and Americans who are concerned with current national security issues will take the time to refresh their memories and understanding, perhaps they can begin countering the myth with a more accurate account of those events half a century ago. If that happens it will be a meaningful service not just to historical truth but to a more realistic and sober view of present-day defense strategy — and, more specifically, of what bombs can do to achieve national goals, and what they can't.

about the Vietnam War

Arnold R. Isaacs was a journalist in Vietnam from 1972 to 1975 and is the author of "Without Honor: Defeat in Vietnam and Cambodia," described in Foreign Affairs magazine as "indispensable for an understanding of the last phase of the Vietnam war." A new and updated edition is now available.