GOP readies another round of legislative terrorism in search of spending cuts. Biden needs to fight back hard 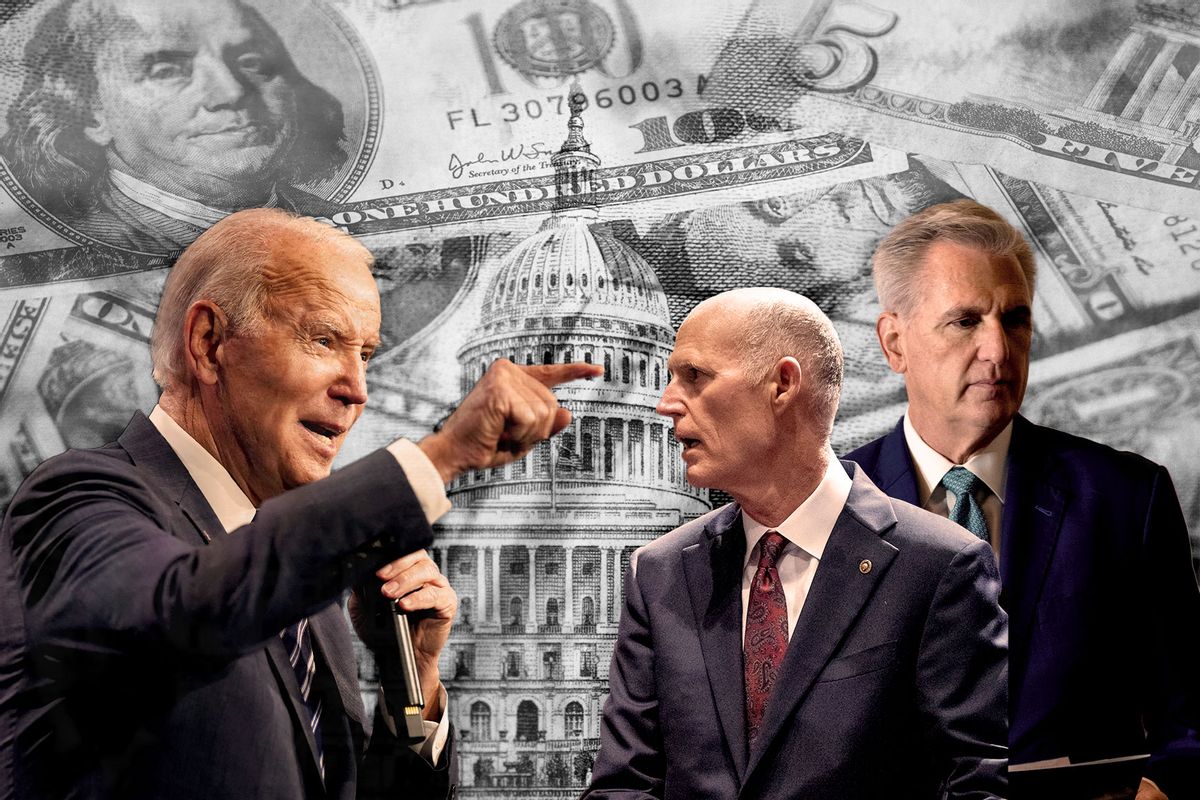 Sometime during the next session of Congress, Republicans will check the box on one of their perennial agenda items whenever a Democrat is president: Threatening to crash the entire U.S. economy if the president doesn't submit to their demand to slash the safety net of senior citizens.

Leading up to the midterm elections, Sen. Rick Scott of Florida, the chairman of the National Republican Senatorial Committee, did a lot of thinking out loud about entitlement "reform" (meaning cuts to Social Security and Medicare) that Republicans might undertake should the expected red wave bring them into the majority. Around the same time, House Minority Leader Kevin McCarthy began talking about the spending cuts a putative House majority would force by using the extension of the statutory debt limit as a bargaining chip, although he refused to be precise as to which programs would be slashed.

The red wave, of course, never reached the shore: Democrats retained the Senate, while McCarthy is presumed to become the speaker of a slim and nearly unmanageable Republican House majority. But Satan never sleeps, and neither do Republicans. Even though their political position is considerably weaker than they had hoped, they have pressed on with their policy intentions. Sen. John Thune of South Dakota, a member of Senate Republican leadership, has explicitly linked social program cuts to an extension of the debt ceiling. He downplayed the risk of default, even though there is no point in linking the two issues unless the Republicans plausibly threaten to trigger such a credit crisis. To do otherwise would be like holding a rubber knife to a hostage's throat.

A prayer before dying: On the Republican Party's terminal illness

To date, President Biden's response has been mystifying. He insisted in October that he "would not yield" to Republican pressure, but also said he opposed either repealing the debt ceiling or raising the limit by such a large number as to pull the issue off the table for a long time to come, since such a bill might run into a Republican filibuster. Admittedly, neither approach would enjoy smooth legislative sailing, either in a lame-duck session or in the succeeding Congress (the debt limit could be reached as soon as the first quarter of 2023). But Biden's reactions so far have weakened any political leverage he might have had.

Some Democrats are tired of the periodic debt ceiling spectacle and want to be rid of it for all time. During the most recent debt limit fight in October 2021, Sen. Elizabeth Warren said, "I'd be glad to see us get rid of the debt limit. It serves no purpose to restrict spending, it just creates opportunities for political gamesmanship and threats to our economy. It's time to get rid of it." To be sure, perennial nuisances like conservative Democratic Sen. Joe Manchin and no-longer-a-Democrat Sen. Kyrsten Sinema make legislative abolition of the debt ceiling a difficult needle to thread, even with a 51-seat Democratic caucus. But Biden has the power to accomplish the same goal unilaterally.

Biden should invoke Section Four of the 14th Amendment, which states that "the public debt of the United States, authorized by law" shall "not be questioned." It's the cleanest option to stymie the GOP's extortion game.

During the last debt limit melodrama, I argued that the president should invoke Section Four of the 14th Amendment, which states that "the public debt of the United States, authorized by law" shall "not be questioned." This provision was designed to prevent representatives of the Southern states from voting to repudiate Northern war debt upon readmission to the Union. The language is sufficiently plain that it does not require a cryptanalyst to unlock its meaning, and it remains the cleanest option to stymie the periodic extortion games by congressional Republicans.

Invoking the 14th Amendment is undoubtedly rolling out the heavy artillery. Does Biden really need to do so in the event of an imminent debt default, now that the issue has become a semi-regular bit of Republican theatrics with no grave consequences thus far?

But in fact, there have been measurable consequences: the U.S. government came close to default under Barack Obama in 2011 (causing a government bond rating downgrade and a slower recovery from the Great Recession) and again in 2013 (also bringing a debt downgrade amid Republican agitation for the privatization of Social Security and Medicare).

That the worst was averted on those occasions is no guarantee that Republicans will pull back from the brink this time. With every election cycle, Republicans have grown more and more extreme. When they were House speakers, John Boehner and Paul Ryan at least attempted to rein in the crazies, albeit with distinctly limited success. It has become obvious that Kevin McCarthy's path to the speakership — which is not yet a done deal by any means — is to let the crazies rule, with himself as the front man. A House in which people like Matt Gaetz, Jim Jordan and Marjorie Taylor Greene rule as a kind of Politburo, with McCarthy as their figurehead, is capable of anything.

Should the world's largest economy and linchpin of the international financial system enter default, we would enter uncharted territory. Before the last go-around, many Republicans apparently convinced themselves that sovereign default would be no big deal. Economists argue otherwise, suggesting a range of scenarios: recession, a drop in the dollar that would spike inflation amid rising interest rates, a plunge in equities, a halt to Social Security payments, a freeze-up in banking liquidity, panic in money market funds and global financial disruptions.

Let me suggest one more scenario. Ever since Richard Nixon de-linked the dollar from gold a half-century ago, doomsayers have been predicting the imminent dethronement of the dollar as the world reserve currency. This prophecy has proved consistently wrong; the dollar's dominance is hardly less than it was in Nixon's time, and it actually increased its safe-haven status during the pandemic.

It is issuance of the world reserve currency that has allowed the United States to run very large budget, merchandise trade and current account deficits for decades. Why? Because the dollars that flow abroad as a result of those deficits are needed by other countries to purchase commodities like oil and conduct other kinds of bilateral trade. Nations with large dollar surpluses don't sit on them; they recycle them as investments in the United States. That is why New York has the deepest and most liquid financial markets in the world. These deep and liquid markets in turn encourage many foreign central banks to hold their assets in New York as well.

Adversarial states like China and Russia have been attempting for years to dethrone the U.S. as issuer of the world reserve currency, so far with meager success. It is the very fact that most international financial settlements are cleared in dollars, just as the SWIFT international transaction network is dominated by the U.S., that makes Washington's economic sanctions against various regimes as effective as they are.

China and Russia have been attempting for years to dethrone the U.S. as issuer of the world reserve currency. A Republican-fueled debt default would offer them a huge opportunity.

There are many economic arrangements that seem so stable and habitual that they might as well be eternal. But the fact is, like the 19th-century system in which the British pound sterling was pegged at a fixed rate to gold, such arrangements only work until they cease to work. Should a U.S. sovereign debt default occur, the money centers in Europe and East Asia might well shrug their collective shoulders and continue to clear transactions in dollars and purchase U.S. debt instruments just as before. There is little reason to prognosticate a sudden collapse of the dollar's status as the coin of the global realm.

But there is a greater probability of a slow unraveling over several years. Foreign investors will begin to hedge on buying U.S. debt, or explore the possibility of using the euro instead or a basket of stable currencies, or consider financializing the International Monetary Fund's Special Drawing Rights. Following a default, some oil-exporting countries would be more likely to accept settlement in instruments other than dollars.

The consequences of a default in 2023 would probably be more serious than economists have predicted during past political deadlocks. The world has been through three years of pandemic, along with supply-chain disruptions, global inflation, a world splitting into hostile power blocs and now a major European war with no end in sight. U.S. sovereign default could be the culmination of a world polycrisis.

Over time, the U.S. economy would be forced to adjust downward, as massive current account deficits could no longer be sopped up by the rest of the world. More productive investment would have to be generated by domestic manufacturing, while consumption would have to be curtailed. In short, the famously high American standard of living would trend downward for the foreseeable future, until domestic production and consumption could come into closer balance. America's international leadership for the last 75 years has in part rested on what many call the dollar's "exorbitant privilege." As with Britain's retrenchment from empire after World War II, the balance of payments could make U.S. global dominance an unaffordable luxury.

As this article was being written, Chinese President Xi Jinping met with Crown Prince Mohammed bin Salman, the de facto dictator of Saudi Arabia. The main subject of their conversation, of course, was oil, but another topic was the possibility of China settling its oil bill in whole or in part with its own currency. Could the possibility of a U.S. credit default in the next year become the tipping point?

Congressional Republicans are playing Russian roulette with America's continued primacy over the global financial system — a uniquely privileged position that props up our standard of living and international influence. The only beneficiaries of a U.S. debt default would be hostile actors like Russia and China. In this context, Biden would be the well-advised to take all constitutionally available measures to thwart Republicans' willful malfeasance in protecting the nation's interests.

about the Republicans' post-midterm predicament

Mike Lofgren is a former congressional staff member and the author of The Party is Over: How Republicans Went Crazy, Democrats Became Useless, and the Middle Class Got Shafted."