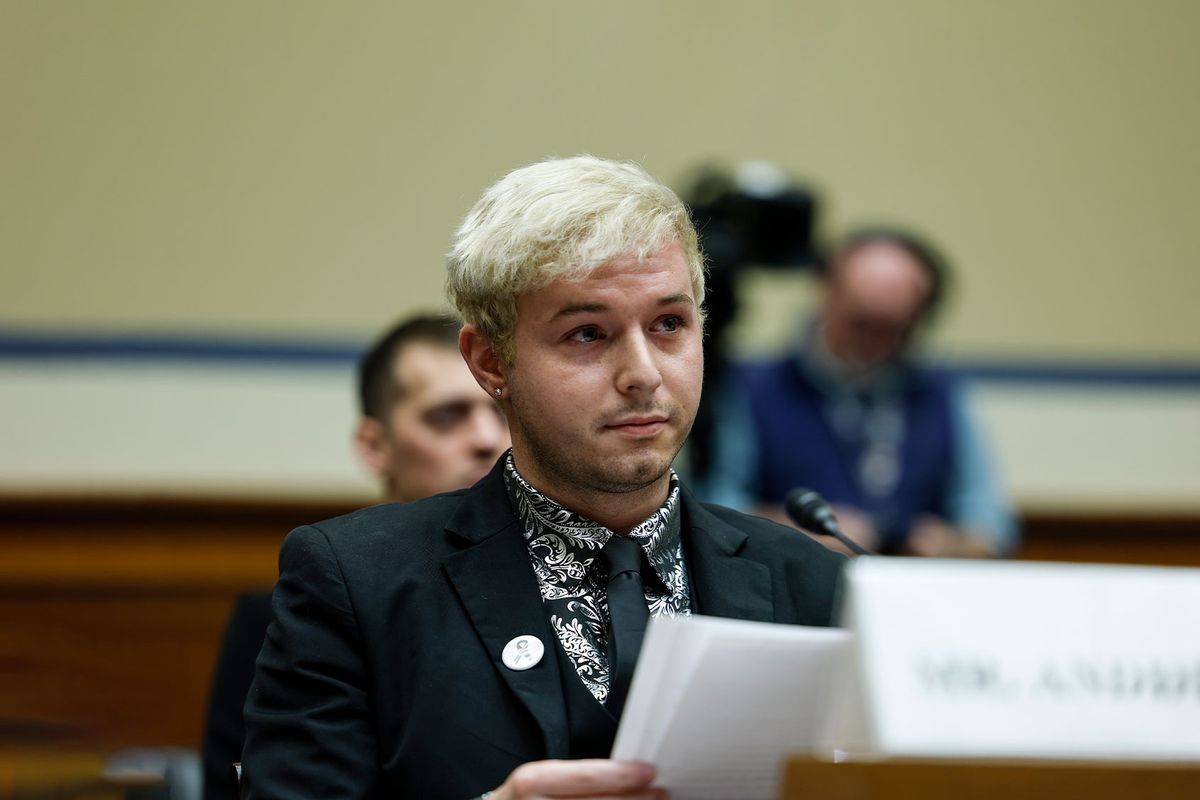 Michael Anderson, a survivor of the Club Q shooting in Colorado Springs, listens during a House Oversight Committee hearing titled "The Rise of Anti-LGBTQI+ Extremism and Violence in the United States" at the Rayburn House Office Building on December 14, 2022 in Washington, DC. (Anna Moneymaker/Getty Images)
--

"To the politicians and activists who accuse LGBTQ people of grooming children and being abusers, shame on you."

During Wednesday's House Oversight committee hearing on anti-LGBTQ violence, Club Q bartender Michael Anderson was blunt, both about his experiences and whom he holds responsible for the horrific mass shooting he survived. A combination of "inaction on gun reform" and "hate speech," he said, led to that terrible night last month in Colorado Springs, where he "saw my friend lying on the floor, bleeding out, knowing there was little to no chance of surviving the bullet wound."

Matthew Haynes, the owner of Club Q, testified that there is a direct line from Republican leaders who reject LGBTQ rights to the five deaths and massive trauma suffered by his customers and staff. Noting that "169 members of Congress" voted against a recently-signed law protecting same-sex marriage, he asked, "Are LGBTQ people not part of your constituency? Do you not represent us? While we wait for you to answer, we are being slaughtered and dehumanized across this country, in communities you took oaths to protect."

Republicans on the Oversight Committee, however, had a different villain in mind to blame — for not just the Club Q shooting, but for the fact that the past two years have seen record levels of fatal violence against trans and gender non-conforming people. They pointed fingers at Democrats, protests against police brutality, and mostly non-existent police defunding.

After offering the standard "thoughts and prayers" to the victims and survivors of the Club Q shooting, ranking member Rep. James Comer, R-Ky., complained that Democrats just want to "blame Republicans," so they "don't have to take responsibility" for "defund the police and soft-on-crime policies." He noted that the alleged shooter "was no stranger to law enforcement," having been arrested in 2021 after allegedly threatening to blow up a neighborhood and kill family members. The charges were later dropped and law enforcement declined to use Colorado's "red flag" laws to take the guns away from the suspect.

"Crime is simply out of control in large, Democrat-led cities," he argued.

There's just one glaring problem with this argument, however: Colorado Springs has not defunded their police department at the behest of Black Lives Matter activists. Nor is it controlled by Democrats. Both the mayor and district attorney of Colorado Springs are Republicans. In fact, the city has actually increased police funding for 2023.

Even beyond Colorado Springs, there's little reason to think police "defunding" is shaping crime. As the Center for American Progress reported in July, "Democrat-run cities spend more money on policing than Republican-run cities" and of "the 25 largest cities, 20 saw increases in their police budgets from FY 2019 to FY 2022." The slogan "defund the police" that was bandied about Black Lives Matter protests in 2020 never really took off with Democratic politicians and certainly hasn't had much impact on actual police funding. For certain, some cities have attempted to reallocate police funding to prevention services, but in general, those efforts have been overstated in the media coverage given to the "defund the police" movement.

These blame-the-left talking points continued to be echoed by Republicans throughout the hearing. But most of the witnesses before the House committee focused instead on the links between anti-LGBTQ rhetoric and violence.

"It is apparent that this rhetoric incites fear, stokes hatred, and ultimately causes violence. Pretending it does not is tolerating intolerance," Club Q shooting survivor James Slaugh said.

"Hate speech turns into hate action, and actions based on hate almost took my life from me, at 25 years old," Anderson emphasized.

Committee chair Rep. Carolyn Maloney argued that this is a top-down phenomenon. "In 2018, Republicans in state governments across the country introduced 110 pieces of legislation targeting the health and safety of LGTBQI people. And the past legislative session, this number tripled to more than 340 pieces of anti-LGBTQI legislation."

She flagged Florida Republican Gov. Ron DeSantis in particular for passing the "don't say gay" law in Florida that so severely restricts what can be said in public schools about LGBTQ identities that many queer students and teachers have re-closeted themselves out of fear of legal retaliation.

In August, the Human Rights Campaign reported that "the average number of tweets per day using slurs such as 'groomer' and 'pedophile' in relation to LGBTQ+ people surged by 406% in the month after" Florida's bill was passed. The top 500 tweets leveling false "grooming" allegations were viewed 72 million times. Since then, Tesla CEO Elon Musk has taken over Twitter, reinstating thousands of accounts that were banned for hate speech and disinformation. A report from Media Matters and GLAAD shows that the result was entirely predictable: The top nine accounts flinging baseless "groomer" accusations "saw an over 1,200% increase in retweets of tweets with the slur, going from nearly 3,600 to over 48,000." Libs of TikTok, which promotes anti-queer content, received a 600% increase in its mentions on Twitter.

"It's become pretty clear that the LGBTQ+ community is now at the heart of the new iteration of the culture wars that we have been unfortunately going through in recent years," Yotam Ophir, an assistant professor of communications at the University at Buffalo, told Scientific American this week.

As Wednesday's hearing shows, however, most Republican politicians have no interest in facing the links between hateful words, anti-LGBTQ policies, and violence. The party is still largely controlled by religious right groups that continue to assert that same-sex relationships are sinful and transgender identities are unnatural. Musk's takeover of Twitter has also revealed a more secular "alt-right" anti-queer movement, as epitomized by Musk's own tweets complaining about "Forcing your pronouns upon others when they didn't ask" and the "woke mind virus." Groups like the Proud Boys, who target drag shows with armed intimidation "protests," may be distasteful, but they are a source of funding and energy for a Republican party that is increasingly out of step with the larger American public.

Despite what they endured, the survivors of the Club Q shooting who testified offered a message of resilience.

"In the words of my personal gay icon Christina Aguilera, you are beautiful no matter what they say," Anderson said. "Words can't bring you down, so don't let them bring you down today."