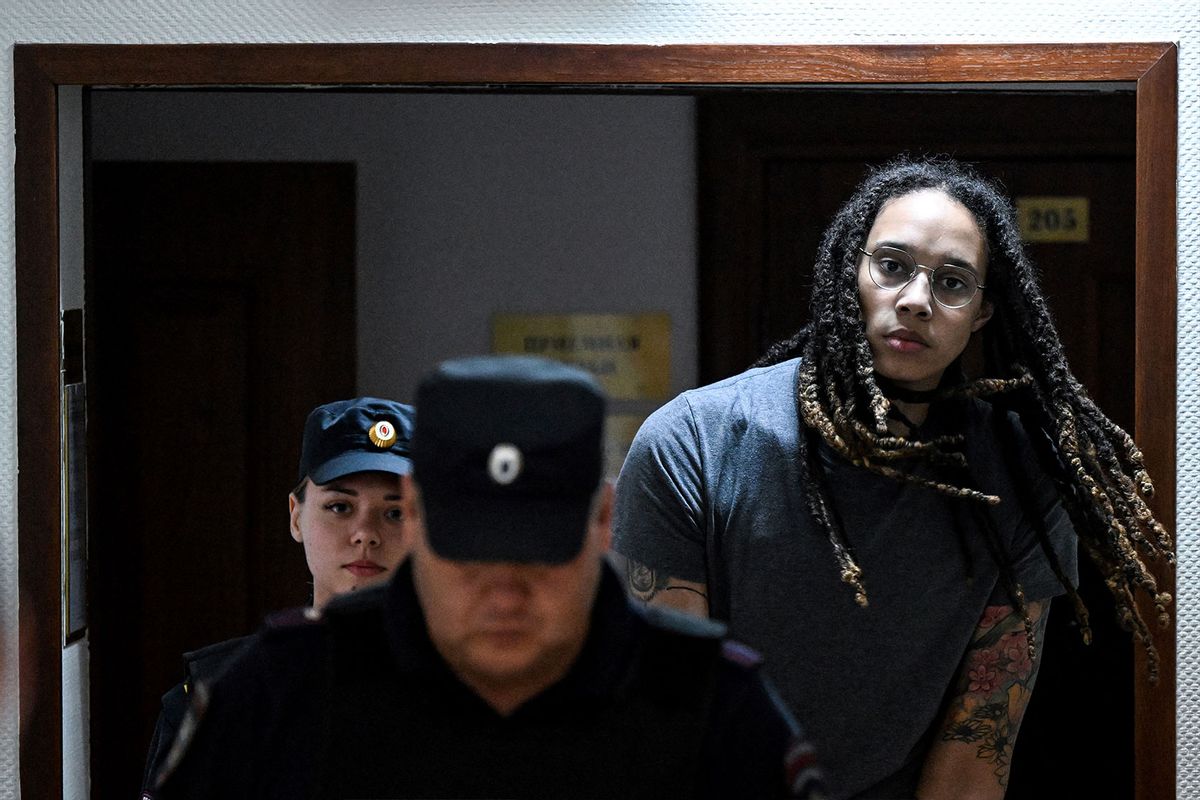 US Women National Basketball Association's (WNBA) basketball player Brittney Griner, who was detained at Moscow's Sheremetyevo airport and later charged with illegal possession of cannabis, is escorted to the courtroom to hear the court's final decision in Khimki outside Moscow, on August 4, 2022. (KIRILL KUDRYAVTSEV/AFP via Getty Images)
--

Tuesday is supposed to be a good day. President Joe Biden is expected to sign the Respect for Marriage Act into law, making it illegal for any state to invalidate, repeal or negate the legal marriages of same-sex or interracial couples. No doubt the ceremony itself will all be smiles and hugs. Still, as Biden acknowledged in the White House statement, the bill is only necessary because of "the uncertainty caused by the Supreme Court's Dobbs decision," which reversed Roe v. Wade, in which Justice Clarence Thomas openly invited the right to challenge Obergefell v. Hodges and give the court a chance to destroy the national right to same-sex marriage.

The media coverage of the bill largely framed it as a sign of social progress, focusing on how a strong majority of Americans (71%, according to Gallup) support same-sex marriage. This included glowing coverage of the minority of Republicans who voted for the bill, which threatened to eclipse the real story, which is that the majority of Republicans in Congress very much voted against it. The religious right, which still controls the Republican party, has not given up on its mission to repeal hard-won gay rights and make homophobia the social norm again. On the contrary, this past week's news cycle underscores how, if anything, the Republican backlash against LGBTQ people is only getting nastier, despite strong evidence that such rhetoric is contributing to an atmosphere of violence and hate crimes.

"OK groomer" back on Twitter: Anti-LGBTQ hate gets even uglier after Colorado Springs

For days, we've endured Republican vitriol over the release of WNBA star Brittney Griner, who has been facing a 9-year sentence in a Russian penal colony after vape cartridges containing cannabis oil were found in her suitcase. For many Americans, Griner's release is good news, especially after Russian President Vladimir Putin passed another anti-LGBTQ law, basically making it illegal to be out, which Griner is. But Republican leaders lashed out at Biden. House Minority Leader Rep. Kevin McCarthy called it "unconscionable." Rep. Marjorie Taylor Greene, to whom McCarthy increasingly caters, called for Biden's impeachment. Sen. Rick Scott of Florida called it "weak & disgusting," and Donald Trump, always ready with hyperbole, declared it was a "stupid and unpatriotic embarrassment for the USA."

The cover for this viciousness lies in the ostensible belief that it was a lopsided deal, as the U.S. released an arms dealer named Viktor "Merchant of Death" Bout in exchange for Griner. But, as Slate's Fred Kaplan wrote, that's an unconvincing stance; Bout has already served 11 of his 25-year sentence. As the judge who sentenced him explained, "I think the United States' interest in punishing him has been satisfied" and the exchange "would not be a bad equation."

Indeed, trying to make the narrative about Bout is such weak sauce that most Republicans quickly pivoted to another, even less honest talking point: That it's unfair for Biden to bring back Griner, but not former U.S. Marine Paul Whelan, who is being held on accusations of spying for the U.S. (The U.S. denies this.) This argument is — it cannot be stated firmly enough — utter trash. As Secretary of State Anthony Blinken has repeatedly emphasized, this was a "one or none" deal, and releasing Whelan simply wasn't on offer. Whelan's own family accepts this, telling reporters that Biden "made the right choice" under the circumstances.

No, the hyping of Whelan is being done for a gross but obvious reason: To stoke racist and homophobic grievance among the Fox News set. Whelan is a clean-cut white man, a former Marine, being cast in contrast to Griner — a Black lesbian who has been outspoken about racial injustice — in an effort to bolster the "great replacement" conspiracy theory that claims Democrats are deliberately trying to displace conservative whites in favor of non-white, queer, and otherwise cosmopolitan Americans. In the world of Fox News, this isn't even particularly subtle. On Thursday, Fox host Tucker Carlson openly argued that Biden got Griner released because she "hates" the U.S. and "is not white and she's a lesbian."

"In the view of the White House press secretary, those are essential qualifications for a prisoner swap," Carlson claimed. (In reality, Biden's White House is still trying to negotiate Whelan's release, in contrast to Trump's reported unwillingness to engage in talks on Whelan's behalf.) Carlson's arguments echo things Trump said even before the prisoner swap, suggesting that Putin was right to hold Griner, whom Trump called "spoiled" and "loaded up with drugs." (Griner has a medical marijuana prescription. During her trial she said she packed the cartridges by accident for her trip to Russia, where cannabis is illegal.)

Media Matters compiled a chilling dossier of right wing media responses to the swap. Needless to say, reasoned concerns are nowhere to be found. Instead, there are pundits smearing Griner as "anti-American," a "lesbian woman, drug addict, America-hating – woke," "a pot-smoking ladies basketball player" and "anti-American," in addition to complaining that Biden only prioritized her for being "gay and married."

Again, it's all lies. But these lies are being rolled out against a backdrop of increasingly vicious anti-LGBTQ rhetoric coming from the right, and unfortunately, the entirely predictable violence that follows. As I wrote last week, despite the recent mass shooting at a gay club in Colorado Springs, Colorado, conservatives are doubling down on the heinous anti-LGBTQ talk. Last week, the Supreme Court indicated an eagerness to strike down laws barring anti-LGBTQ discrimination. During oral arguments, Justice Samuel Alito tortured both logic and metaphors to compare same-sex couples to people dressed as Klansmen. Meanwhile, the targeted abuse — under the guise of "protest" — of drag shows is only getting worse. A brewery in Renton, Washington, reported its windows shot out before a drag show last week, after a conservative Facebook page called for protests. In San Antonio, Texas, a venue canceled its scheduled drag shows to avoid protests from armed militiamen.

Elon Musk, the billionaire who recently purchased Twitter, has been using the social media network to add even more fuel to the fire. On Saturday, Musk targeted the former head of Trust and Safety at Twitter, a gay man named Yoel Roth. Musk, as CNN described it, "appeared to endorse a tweet that baselessly accused Roth of being sympathetic to pedophilia." That was boosted by the anti-LGBTQ hate account Libs of TikTok, resulting in a terrifying number of death threats aimed at Roth, resulting in him fleeing his home over safety concerns.

Disingenuous conservative gripes about Griner's release are, of course, standard partisan hackery. The all-combat-all-the-time politics on the right won't allow them to ever admit Biden did something right, even in the case where he saved a lesbian from a Russian prison run by a government that openly views homosexuality as the equivalent of pedophilia. But it's truly more malevolent than that, in context. Griner's release is being plugged into a larger and expanding right wing narrative that casts queer people — especially queer people of color — as a threat to straight, white people and their families. That's the kind of rhetoric that ends up being used to justify violence.

On Wednesday, survivors of the Club Q shooting in Colorado Springs will testify before the House Oversight Committee about rising anti-LGBTQ violence. Thankfully, the committee chair, Rep. Carolyn Maloney, D-N.Y., explicitly linked "anti-LGBTQI+ extremism and the despicable policies that Republicans at every level of government are advancing" to "tragedies like what we saw at Club Q." Dancing around the issue only gives Republicans more space to play bad faith games like they are doing with Griner's release. The fight for LGBTQ equality is clearly far from over, but if Democrats stay strong, it can eventually be won.

about homophobia and the right