In a culture of pathological distraction where half the population is semi-literate, this isn't a huge surprise 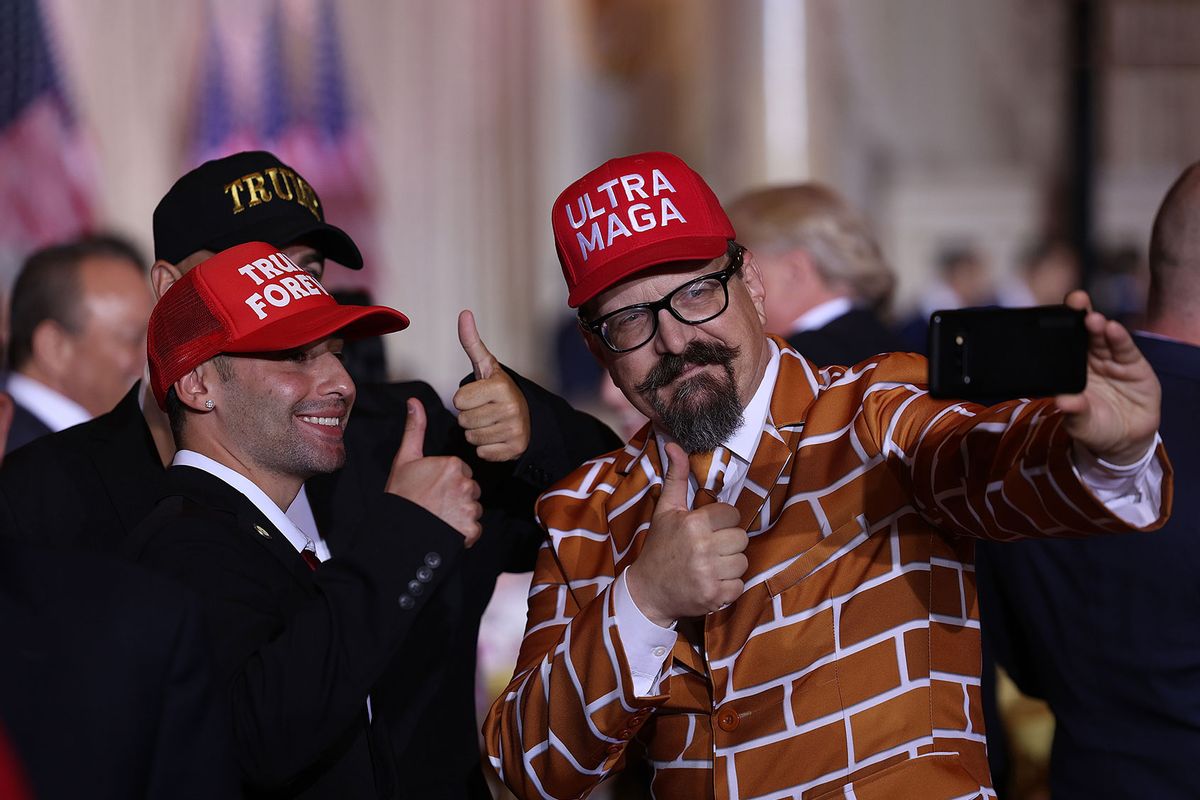 Supporters wait for the arrival of former U.S. President Donald Trump during an event at his Mar-a-Lago home on November 15, 2022 in Palm Beach, Florida. (Joe Raedle/Getty Images)
--

The American people — or a great many of them, at least — believe they can finally see the end of the fascist fever dream they have been lost in for these last seven years. It's a cruel illusion; escape from the waking dream-nightmare is much farther away than it appears.

It is true that large numbers of Americans tried to reorient and steady themselves by voting in favor of "democracy" in the midterm elections. But most people in this country remain punch-drunk, confused by the trauma and abuse they've been bombarded with during the Age of Trump.

As for Trump himself and the neofascist movement and larger white right, they are largely undeterred by that electoral setback. Their existential threat to American democracy and society has by no means ended, and if anything they are amplifying their attacks. We cannot return to "normal" through a state of denial or by ignoring reality. The peril will not magically go away. History has repeatedly shown that ignoring fascism and other forms of authoritarianism is essentially to surrender to them.

This collective denial and amnesia is amplified by a deeper problem: American society and culture are profoundly immature, unserious and superficial. In many ways, 21st-century America is typified by the spectacular and the ridiculous. The Republican-fascists and "conservative" movement understand this, and have deftly exploited and cultivated those failings.

In an unhealthy democracy, politics is largely a function of supply and demand. The Republicans' embrace of fascism and other forms of right-wing extremism simply reflects what their public wants — and what it has been trained to expect.

Don't relax too much: Our abusive relationship with Donald Trump is not over

An immature culture is especially vulnerable to exploitation by right-wing fake populists and demagogues who care only about power and have no conception of the common good or responsible governance.

Win or lose, all the criticisms of Herschel Walker obscure a larger point: The Republicans have acclimated the American public to ghastly behavior from elected officials and candidates for high office. The result is lasting damage to our political system….  Walker's candidacy is a reminder of just how much we've acclimated ourselves to the presence of awful people in our public life. Although we can be heartened by the defeat of Christian nationalists and election deniers and other assorted weirdos, we should remember how, in a better time in our politics, these candidates would not have survived even a moment of public scrutiny or weathered their first scandal or stumble….

The Republicans were once an uptight and censorious party — something I rather liked about them, to be honest — and they are now a party where literally nothing is a disqualification for office. There is only one cardinal rule: Do not lose…. There's a lot of blame to go around, but no one did more to pioneer the politics of disgust than Donald Trump, who took the outrageous moments of his two presidential campaigns and turned them into virtues.

Nichols concludes by arguing, "As usual, however, the real problem lies with the voters," who have fallen prey to "an unhinged faux-egalitarianism that demands that candidates for office be no better than the rest of us, and perhaps even demonstrably worse. How dare anyone run on virtue or character; who do they think they are?"

Nichols correctly observes that the fact that Walker became a viable candidate for high office, "and garnered millions of votes from perfectly normal American citizens," is symptomatic of a profoundly damaged political system. It's also true that Walker's embrace by the Republican Party cannot be understood as something independent of racism and white supremacy as he fulfilled the stereotypical role of a Black buffoon.

Caroline Williams addresses this in another Atlantic essay:

Walker is a big, ball-carrying Black man, and these Republicans do not have an ounce of care for him. They are using him to advance their own Constitution-compromising agenda, the way conservative white people in this country have always used Black bodies when given half a chance.

Walker stands up at podiums, and I feel shame and sorrow and resentment. He is incoherent, bumbling, oily. He smiles with a swagger that does nothing to disguise his total ignorance of how blatantly he is being taken advantage of by a party that has never intended to serve people who look like him.

Walker's candidacy is a fundamental assault by the Republican Party on the dignity of Black Americans. How dare they so cynically use this buffoon as a shield for their obvious failings to meet the needs and expectations of Black voters? They hold him up and say, "See, our voters don't mind his race. We're not a racist party. We have Black people on our side too." Parading Walker at rallies like some kind of blue-ribbon livestock does not mean you have Black people on your side. What it means is that you are promoting a charlatan — a man morally and intellectually bereft enough, blithely egomaniacal enough, to sing and dance on the world stage against his own best interest. Is he in on the joke? Does he know they picked him to save money on boot black and burnt cork, this man who made his name by bringing the master glory on the master's field, who got comfortable eating from the master's table?...

From where I sit, the election looks like a kind of grotesque minstrelsy. The Republican Party is saying that it wants power more than decency. It's saying that race is a joke. We must all take note—it is willing to destroy a man to advance its cause. The party thinks he won't break. And if he does, well, he wasn't really one of them, anyway, was he?

The immature and deeply pathological subculture that elevated Donald Trump and the panoply of other Republican fascists and extremists — Kari Lake, Marjorie Taylor Greene, Lauren Boebert, Ron DeSantis and many others — is multilayered and complex.

American society elevates anti-intellectualism and anti-rationality. As historian and political scientist Richard Hofstadter famously observed some six decades ago, this is especially true of the Republican Party and larger "conservative" movement. Since the rise of right-wing hate media in the 1990s, this embrace of overt ignorance and conspiratorial thinking, and the accompanying rejection of expert knowledge, has become a defining feature of the American right.

More than half of all Americans cannot read at a sixth-grade level. High quality primary and secondary public education, as well as the college and university system — which should create citizens who are capable of critical thinking and acting as responsible members of a democratic community — have been systematically targeted for destruction by the Republican Party and "conservative" movement.

As part of the larger project of authoritarian capitalism, today's "conservative" movement seeks to create human drones who possess "job skills," rather than well-rounded human beings capable of thinking for themselves and asking questions about power, justice and the future of our society.

To some significant degree, the internet, social media and its algorithms, our ubiquitous smart phones and digital technology, and a larger media culture designed to drive what is euphemistically described as "engagement," damages people's ability to think deeply and critically about complex matters.

While overuse of social media and digital technology can be harmful across all demographic cohorts, research suggests it has a particularly negative impact on the brain and emotional development of younger people. Psychologists and other researchers have demonstrated that many Americans are increasingly unable to concentrate or engage in deep focused thinking for more than a few minutes.

Many Americans are trapped, by choice, in a surreal experience machine and surreality where they seek to medicate their social alienation, numbness and learned helplessness and misery through constant stimulation and distraction (as well as through pharmacological means as well). In the language of our gangster-capitalist dystopia, this is known as the "fear of missing out."

Americans in general are also sleep-deprived. Public health experts, social psychologists and other researchers have demonstrated that sleep deprivation and exhaustion negatively impact empathy and other feelings of connectedness and shared concern for others, which can only facilitate the spread of authoritarianism and other cruel politics.

America's media and public discourse are increasingly driven by speed, superficiality and endless desire for "content" that is antithetical to reflective writing that speaks truth to power.

America's news media and the nation's larger public discourse are increasingly dictated by speed and superficiality and an endless supply of "content" in service to clicks, likes, downloads, retweets and of course advertising revenue.  Contemplation, rigorous thinking, serious public conversations about politics and society, and the kinds of reflective writing and other thinking that speaks truth to power and empowers citizens is shoved underground or rendered invisible by such a system.

These cultural problems are amplified (and in some ways created) by what philosopher Nancy Fraser calls the "cannibalistic" tendencies of late capitalism, meaning its drive to monitor, regulate, financialize and ultimately devour every aspect of human life from before birth to after death. This version of capitalism has created extreme wealth and income inequality and a collective experience of economic precarity for most Americans. Survival mode and "grind culture" guts one's ability to live a full and well-rounded and happy life. Such outcomes are antithetical, by design, to genuine democracy, let alone human freedom and human flourishing.

Ultimately, America's democracy crisis and the rise of neofascism are a symptom, not a cause, of deeper cultural and social problems in what the Pulitzer-winning journalist Chris Hedges has called an "empire of illusion." Donald Trump and the Republican Party could disappear tomorrow, and the Age of Trump will likely soon be deleted from the public's collective memory. But the deeper roots of America's democracy crisis will not go away. Our society is sick and is using maladaptive behavior to compensate for that condition. American society will not get better until its leaders and the public at large face admit the horrible reality of the situation and then do the hard work to remedy it.