"Why are these conflicts allowed?" Corporate giving to SCOTUS-linked group sparks blowback 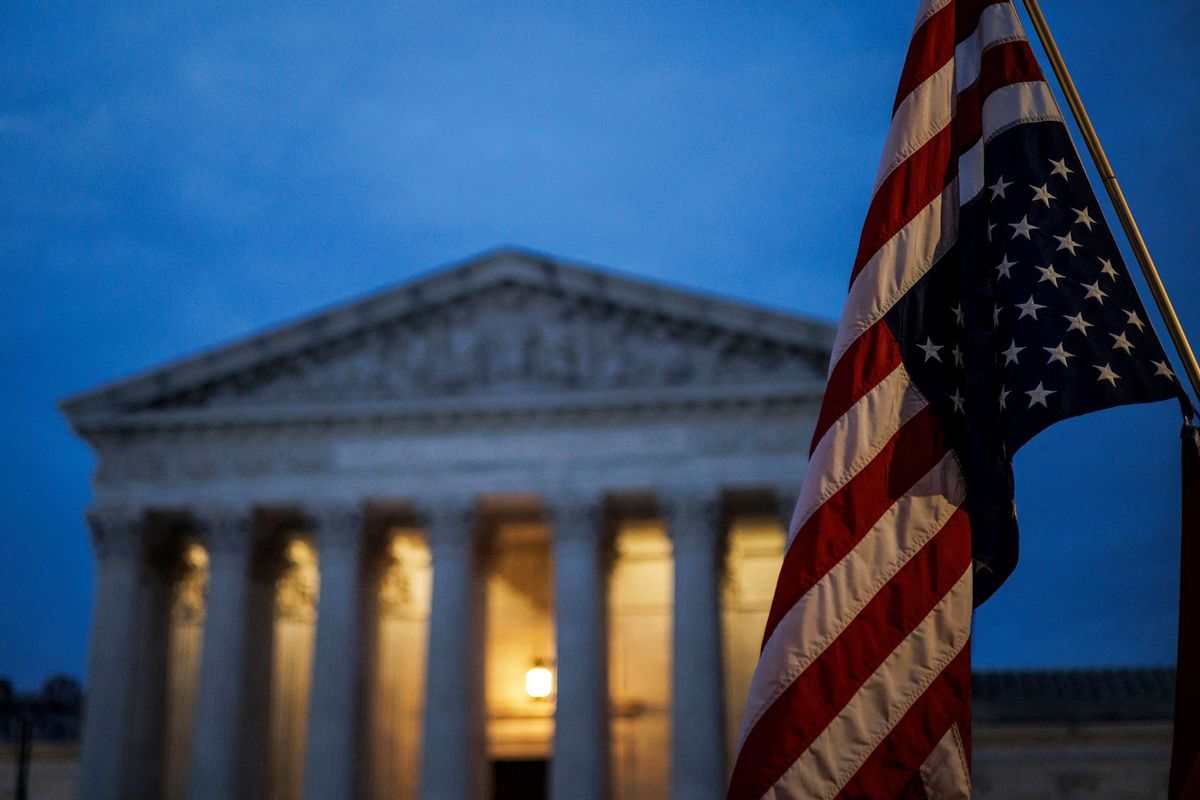 An abortion rights activist flies an upside-down US flag, the international sign of distress, outside of the US Supreme Court during a protest in Washington, DC, on June 26, 2022, two days after the US Supreme Court scrapped half-century constitutional protections for the procedure. (SAMUEL CORUM/AFP via Getty Images)
--

Alarm and concern were expressed Saturday in response to new reporting about a charitable group with close ties to the U.S. Supreme Court that has been soliciting and accepting donations from corporate interests and far-right activists with cases before the court.

The New York Times exposé focused on the activities and fundraising of the Supreme Court Historical Society, a nonprofit that claims its mission is "dedicated to the collection and preservation" of the court's history.

While the group refused to disclose its donors to the Times, reporters from the newspaper determined that much of the funding came from powerful companies like Chevron, Goldman Sachs, Time Warner and Facebook as well as anti-abortion activists like the Rev. Rob Schenck.

According to the newspaper:

The society has raised more than $23 million over the last two decades. Because of its nonprofit status, it does not have to publicly disclose its donors — and declined when asked to do so. But The New York Times was able to identify the sources behind more than $10.7 million raised since 2003, the first year for which relevant records were available.

At least $6.4 million — or 60 percent — came from corporations, special interest groups, or lawyers and firms that argued cases before the court, according to an analysis of archived historical society newsletters and publicly available records that detail grants given to the society by foundations. Of that, at least $4.7 million came from individuals or entities in years when they had a pending interest in a federal court case on appeal or at the high court, records show.

In the case of Chevron, the oil giant actively gave to the society even as it had a pending climate litigation working its way through the court.

In response to the new revelations, public interest attorney Steven Donzinger, who was himself targeted by Chevron for his work aimed at holding the company to account for its polluting activities in Ecuador, said the implications were "horrifying."

"Why are these conflicts allowed?" asked Donzinger.

Others quoted by the Times said the effort by people like Schenck, who admits to using the charitable group as a way to get other anti-abortion activists closer to the justices, creates a clear conflict of interest.

Charles Fried, a Harvard Law professor who once served as solicitor general in the Reagan administration and counts himself a donor to the Historical Society, told the newspaper he was so "horrified" by Schenck's behavior that he may no longer give.

"It's disgusting," Fried said. "Many of the people who contribute have the same reasons I do. You go to a cocktail party and support a good cause. But it turns out that for some people it's not that innocent."

While the Times notes that the Historical Society is "ostensibly independent of the judicial branch of government," the reality is that "the two are inextricably intertwined," with court justices serving as chair of the board and hosting gala events where exclusive access is reportedly part of the allure.

The left-leaning Citizens for Responsibility and Ethics in Washington (CREW) said the reporting raises "significant questions" about the group which has "raked in millions — a significant chunk of it from groups with cases before the Court" over the last two decades.

Fix the Court, which acts as a watchdog organization for the Supreme Court, said the justification for the Historical Society's existence just doesn't hold water.

Gabe Roth, the group's executive director, told the Times that if money was an issue for funding such a project it would be the best solution — one free of ethical concerns — for Congress to simply appropriate the money needed to maintain the history of the Supreme Court.

about the radicalized Supreme Court