"They got Daddy": Reckoning with my grandfather's kidnapping, racial terror and our family's trauma

My grandfather was brutalized for suing a white cop in Jim Crow Alabama. Here's what reporting the story taught me 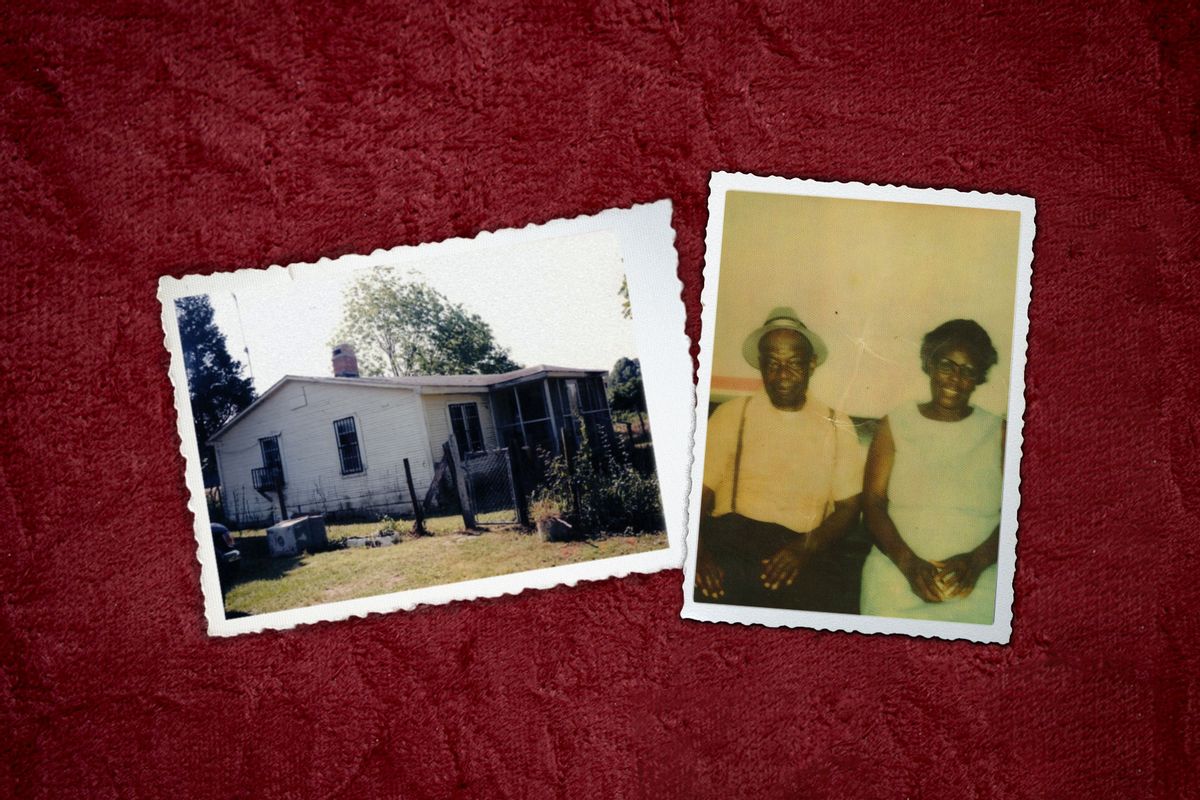 Adapted from the introduction of "They Got Daddy: One Family’s Reckoning with Racism and Faith" by Sharon Tubbs. Published by Indiana University Press, 2023. Used with permission.

Memories of my grandfather remain both vivid and vague, even now, after researching and writing about the most tumultuous season of his life. I see him in demented old age, sitting on a pine wood chair in my grandparents' rural Alabama home, his gaze distant, his suspenders securing a pair of baggy slacks. Yet, I cannot recall any words or sentiments exchanged between us. I see the disabled arm hanging at his side, something I'd wondered about but never asked anyone to explain.

Several years passed from when I wore a ponytail and patent leather Mary Janes at his funeral to the day my mother mentioned the kidnapping. We were watching the news, and one story featured an upcoming Ku Klux Klan rally in some part of Indiana. My childhood mind questioned whether the hate group still existed in the 1980s, but my mother verified that they most certainly did. As a matter of fact, she said, "They got Daddy," referring to my grandfather. Those words would guide me along a journey to learn much more about Israel Page, the grandfather whose character I saw more clearly after death than in my memories of his life. In the process, I would also learn about how racism affected me as a Black woman in America.

A short history of fake history: Why fighting for the truth is critical

My first career as a newspaper journalist prepared me for the task. Editors and experience trained me in interviewing and researching people and their pasts. I gathered details from my mother, her siblings, my grandmother, and my grandfather's contemporaries. Israel Page had worked as a church pastor, a sharecropper, and a well driller, they'd said. Research through courthouse records, libraries, online databases, and writings about racism yielded more results. I learned that the kidnapping ordeal began in 1954 with a car accident between my grandfather and a white sheriff's deputy. The accident left his right arm lame, which meant he could no longer drill wells, which led to his lawsuit against the deputy, which culminated in the 1959 kidnapping and beating by white supremacists.

I originally planned to tell the story of Israel Page's five-year legal battle with that deputy, Benjamin Brantley "B. B." Lee. The tale had moved silently through the Page family, feeding into cultural trauma from one generation to the next. The more I dug, the more the story swelled and extended beyond the 1950s and into the 21st century. Israel Page v. Brantley Lee eventually became my framework to explore lingering systemic issues through the experiences of one family, our family. Today, I still wonder about lasting repercussions from that disturbing slice of his life.

Cultural trauma describes the lasting effects of racism on African Americans, or, more generally speaking, it occurs when members of a group endure something horrendous that scars their group consciousness and changes their identity. The concept applies, then, to Jewish people whose ancestors endured the Holocaust, Japanese Americans forced into internment camps, and of course African Americans in the aftermath of slavery, Jim Crow, and even 21st-century tragedies of police brutality. Racism and the cultural trauma it carries seeped from my grandfather to my mother, uncles and aunts, to me.

Author and experienced birth doula Jacquelyn Clemmons said cultural trauma can't simply be dismissed or forgotten. "When we consider that we are not only walking around with our own lived experiences and traumas but also those of our ancestors, we must slow down and take a hard, honest look at our past," Clemmons wrote in a 2020 article for Healthline. To truly heal, we must address the cultural trauma that has always been there, shaping our perspective from birth."

Israel Page v. Brantley Lee eventually became my framework to explore lingering systemic issues through the experiences of one family.

While writing the book, my own racial fears and triggers unveiled themselves. I began remembering certain incidents, such as the time a retail worker practically chased my sister and I out of a store, assuming we'd plotted to steal clothes. Then there were instances when I shrank inwardly. Like when my homemade bologna sandwich fared cheaply compared to my white friends' lunches during an elementary school field trip. When I froze as a young journalist while covering a story about a Klan march. When, as an adult, I feared stopping for fast food in a city once rumored to be a "sundown town" that forbade Blacks from being out past dark. In an instant, tears would fall as my body recalled the shame, embarrassment, or fear I felt during those moments. And I realized that I, like so many other African Americans — be they impoverished or wealthy, unknown or celebrity — fit within the rubric of the culturally traumatized.

Linking the past and present

My research became more than ingredients for a book when I considered the impact of cultural trauma and the stigma of black and brown skin in my life. This was a journey of reckoning, of relating and healing that linked my grandfather's experiences with my own. I saw how my fears and emotions mirrored situations my ancestors suffered. Not that I had been blind to these connections before, but I hadn't previously felt or processed them to the same degree. Civil rights legislation deleted the Whites Only signs, but total equity remained elusive.

In 2020, the killings of Ahmaud Arbery, Breonna Taylor, and George Floyd occurred in a four-month span. Other fatal shootings followed into 2021, pitting some white police officers against unarmed African Americans. The era marked a shift, an uprising of sorts that yielded protests nationwide, sharp social media debates of free speech and so-called cancel culture. America revealed its heart as divided, its future headed backward toward a stark segregation of ideals. For many people of color nationwide, these tragedies equaled triggers, awakening the trauma inside of us, sparking emotional pleas for help and hope, eliciting passions that our white friends and allies could not fathom because their bloodline lacked the tainted plasma of discrimination.

We have always amounted to more than the ferocity of our racial battles.

Today, I work as a nonprofit leader serving under-resourced communities and underserved groups. My experience and research in the human services realm, coupled with my work for "They Got Daddy," revealed more links between past and present systemic racism. For instance, the eugenics movement sanctioned doctors who unwittingly sterilized Black women during the early 20th century. I recall mentioning a surgical procedure in 2017 to a friend who told me her family shunned major surgery of any kind because doctors stole the wombs of two Black relatives during the eugenics era. The horror echoed in 2020 when a whistleblower accused a doctor of performing hysterectomies on undocumented women detained by U.S. Immigration and Customs Enforcement (ICE) without their knowledge. It came as no surprise to me or other nonprofit leaders, then, when African Americans initially ranked among the most resistant groups to take COVID-19 vaccines. Of course, we were. A deep mistrust of American medicine had baked into the culture due, in part, to records of the eugenics movement, the well-documented Tuskegee Experiment, and modern reports of implicit bias in hospitals, to name a few reasons.

We are more than our struggles

Still, so much more filled my research journey than oppression and fear. Equally ingrained in our story are the family reunions, the bonds formed through laughter and perseverance, the oral histories I'd heard for years without appreciating their warmth and cultural swagger. These were the memories that relatives retold at holiday gatherings, during dinner after a funeral service, while sitting on the front porch to catch a spring breeze. These proud snapshots convey the strength of the Black family, the overcoming spirit that refuses to let the pangs of the world steal our joy and zeal for living. We have always amounted to more than the ferocity of our racial battles.

Black joy: The power and politics of Go-Go music in the era of Black Lives Matter

For many Black families, including ours, faith charted the course to overcome. It empowered us to survive the harshest of conditions from 17th-century fields, to the protest marches of the Sixties, to the shootings that preceded the Black Lives Matter movement. Throughout this project, I felt the complexity of emotions, including the pain that my relatives must have worked through and that people of color live with regardless of our generation or time. The defeat of discrimination. The frustration and belittling of injustice. But also, I felt the reasons why African Americans possess pride and distinction in who we are, nonetheless. The passion for our culture. The hope and confidence found through faith.

In the end, I embraced my grandfather by filling the voids left in my childhood memories. He was not the Martin Luther King Jr. I wrote about in a middle-school essay. He was no Medgar Evers or Thurgood Marshall. He was a Black man in suspenders who wanted to take care of his family and live his life in a small country town, a man who believed strongly in a God much bigger than us all. He was this guy living at a time when an unjust system threatened to use his skin color to steal his greatness and hope, in much the same way that injustice threatens us all. That same threat never stopped breathing through my grandfather's children. It still breathes in me today. Yet, learning the fullness of his story — our story — has allowed me to exhale.

about U.S. history of racial injustice

Sharon Tubbs is an author, speaker, and nonprofit leader, currently living in Fort Wayne, Indiana. Her latest book is "They Got Daddy: One Family's Reckoning with Racism and Faith."