It's the most wonderful time of year ... to not make your loved ones of color visit a sundown town 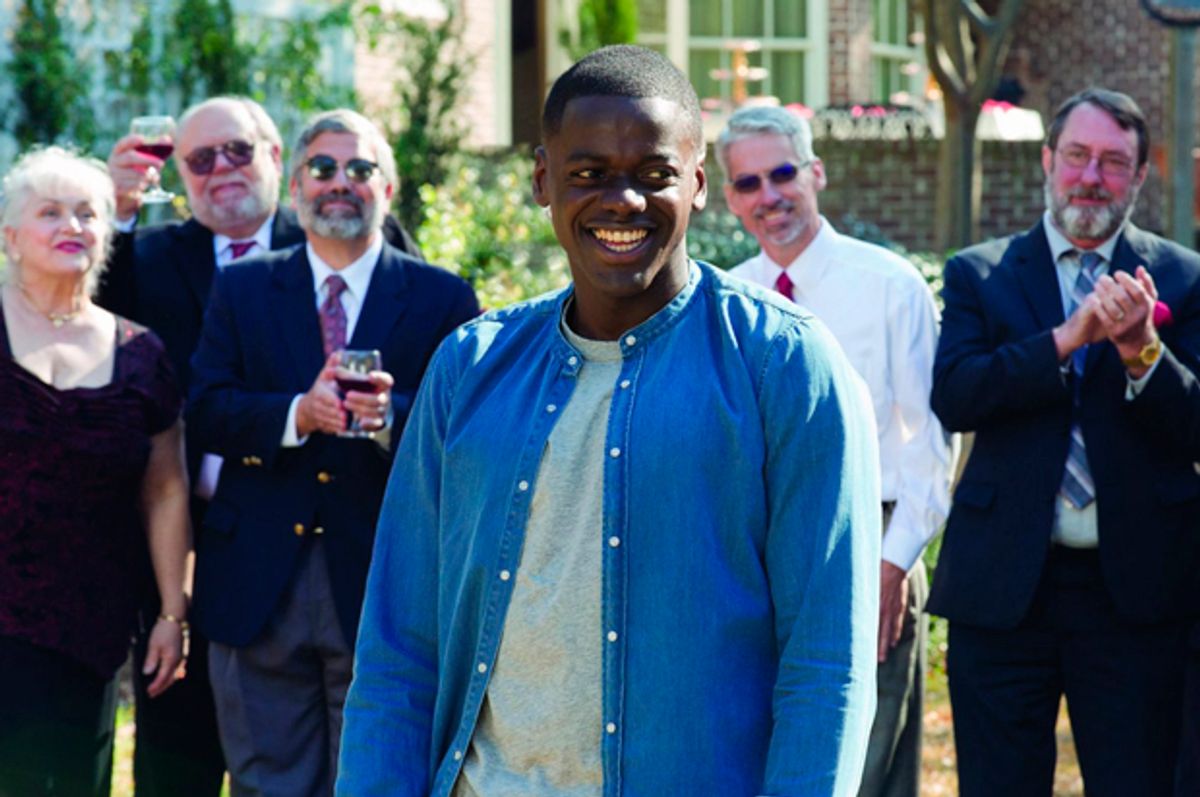 Daniel Kaluuya in "Get Out" (Universal Pictures)
--

Our invitation arrived in the mail a few weeks ago, but I decided I would not be attending in January, long before the event was thought of.

My husband and I were expecting it, however. His niece eloped in December 2020, mid-pandemic, and the young couple recently discovered they're expecting. That's wonderful news. They selected a date coinciding with our Thanksgiving visit to the Midwest, an opportunity for their expanding extended family to gather.

While we are staying with my mother-in-law in a city many miles away from the affair, I will delight in helping her to prepare the cakes and treats her daughter has requested, family recipes we'll be baking from scratch. We will load my mother-in-law's car with all the supplies needed for the celebration, along with snacks for the two-and-a-half-hour trip each way.

Then I will wave goodbye to my husband as he drives his mother there, and breathe a sigh of relief at having chosen my calm and sanity over being the only Black person present in the house of two-time Trump voters . . . in a village of about 2,000 people, where my presence temporarily raises its African American population from 13 to 14.

That number is not a joke. It's listed on the town's 2020 census data.

In the current political environment, my visit to such a place elevates the probability of emboldened strangers aggressively parroting Tucker Carlson's talking points in my face. It increases the likelihood that someone will ask how I feel about Ahmaud Arbery's killers or Kyle Rittenhouse's culpability, mainly to confirm whether we are the liberals they assume us to be.

Even if no one is so bold, I can expect stares and polite silence when I reveal what I do for a living and that I reside in a supposed "anarchist" city.

Noooo thank you. Despite my mother-in-law's initial insistence that we're all family, I am avoiding all "Get Out" adjacent situations now and forevermore.

Are you in a similar bind? In that case, I invite you to choose yourself and your safety this holiday season. Yes, I said safety.

Returning to that population statistic, another simplifying factor is that my husband's sister and her family live in a part of Illinois that fits the characteristics of a sundown town.

The late James W. Loewen, a sociology professor at the University of Vermont who wrote "Sundown Towns: A Hidden Dimension of American Racism," defines sundown towns as communities that "kept out African Americans (or sometimes Chinese Americans, Jewish Americans, etc.) by force, law, or custom."

The assumption that sundown towns mainly exist the South is incorrect. They're all over the country, with most of them concentrated in the Midwest. Many are listed on Loewen's online database.

Few places announce themselves by posting signs on the outskirts of town, as they once did. But they persist because of the local population's adherence to keeping things as they always have been – tradition, in other words. Functionally that means local law enforcement officials are more likely to harass non-white people who happen to pass through.

That also means if you're a Black, Indigenous, Asian, queer or other non-white, non-heterosexual conforming person who somehow gets invited to such a place, you can expect at the very least to stand out. You may be a guest in someone's home, but unless your name is Candace Owens or Winsome Sears, the locals who are also present may make you feel outnumbered.

No dishes or punches need to be thrown or weapons drawn for a person to feel unsafe. No slurs need to be uttered for someone to let you know they think of you as . . . different. All that's required is people to make you feel out place. Even those who mean well are prone to party fouls like kicking off small talk by raving about how much they love "Green Book" or "The Help" although you didn't ask. This has actually happened before, and 2021 left me too exhausted for another round.

So if your spouse, partner or an elder has hauled out the "we're family" cattle prod to herd you over the river and through the woods into Lovecraft Country because that's how they celebrate every winter, now is a great time to push back. If you have a mother-in-law like mine, you may not have to; a gentle conversation was all it took for her to relent. That, and an offer to bake together. Time with family is all she wants, and the feeling is mutual.

Last year the pandemic gave millions of us a taste of such peaceful holiday moments, free of your Newsmax-addled uncle's ravings. Even if he was in your Zoom room, you could mute him. Remember how nice that was?

There's no law forcing you to resume that distress in person – not the legal bonds of marriage, nor adoption. Most people are keeping their celebrations intimate again anyway. According to a survey by Ohio State University's Wexner Medical Center, an estimated 72% of Americans plan to celebrate this holiday season with just their household.

For everyone else, there is telecommunications and mail.

Sending seasonal goodwill, situational best wishes and a lovely token is fine. It allows you to keep your whole body and its unperturbed emotions at home, far away from the stress of some fool braying nonsense about the evils of critical race theory or coronavirus conspiracies.

This changes the connotation of the holiday travel strategy termed "divide and conquer," I realize. Many couples with family members that live in the same region but hundreds of miles apart know the system well. Sometimes being home for the holidays means splitting up to cover the most ground.

But the Jan. 6 insurrection attempt changed my attitude regarding where I'm willing to devote my time and mileage. I already knew my sister-in-law and her husband voted for the previous White House occupant twice, enthusiastically, and fully cognizant that he encourages violence against his political opponents , denigrates women and vilifies journalists.

That means they and their eligible children voted against my well-being and right to exist on three counts.

They weren't thinking about me when they did this, which is why I doubt they'd understand that my absence from their event isn't a matter of me taking a partisan stand. It's about protecting myself from harm. I'm simply not in the mood to be around people who are not fully invested in my comfort and joy.

Residents of such burgs may take offense at such a broad characterization about their Nice Place to Live™, which is one of the reasons I have refrained from identifying precisely where my sister-in-law resides. (Good luck guessing the spot: Loewen began his sundown town research in 1999 with Illinois. As of 2020, his team's estimate for that state alone came to more than 500 such places, or around 70% of all towns in the state.)

Honestly, I understand their ire for the same reason that I get why Hallmark Channel valorizes such places on greeting cards and in their holiday programming. They spruce up so nicely in wintertime! They do not like being made to feel bad about history! Plus, their denizens may have never witnessed any discriminatory behavior with their own eyes. (Again, see the part about the 13 Black folks out of more than 2,000.)

And when their neighbors and friends indulge in conversations salted with bigotry, they may simply leave the room or try to change the subject.

But insistent politeness is one of the reasons our democracy and fractured relationship with the facts teeters on the precipice. Refusing to discuss the cancers that are eating our country with the people disproportionately afflicted by that illness prevents people from acting, or voting, from a place of common good.

Those same nice people might argue they are using their politics for greater good by prioritizing law and order, family values and other coded language gift wrapping discriminatory policies that make it more perilous for people like me to be in places with dodgy cell phone reception.

They can view a jury clearing a man who drove to another state with a semi-automatic weapon and killed two people as validation of their second amendment rights, instead of a green light to other people with itchy trigger fingers that that they can attack anyone they disagree with on specious grounds and get away with it.

Also, they would really love to have you over for eggnog and cocoa.

The saying that the only thing necessary for the triumph of evil is for good men to do nothing is only partly correct. It misses the part about evil germinating in soil of silence before it spreads like a noxious weed. That may read in a way that makes the case for your bridge-building loved one, but not if you or your partner are supposed to be the actual bridge. It is never the season to be stepped on, no matter how softly – not on Turkey Day or after New Year's . . . or ever.

Besides, there's always the opportunity to extend an invitation to your place in the future as a show of goodwill. My mother-in-law did that earlier this year, offering to pay for her daughter's family to join her on a visit to Seattle, where my husband and I live. But my sister-in-law's husband forbade it, claiming our city – where legal weed is a gateway drug to such vices as coffee drinking, hiking and apple picking – is "too dangerous."

We had a good laugh at that.

Then I realized he'd presented us with a fantastic gift. Now, if pressed, I can say repeat the same statement about his town and know I'm speaking the truth.

For that I should send him a Thank You card, graciously designed by Hallmark.