The Wisconsin parade and Gabby Petito: People keep dying because the law blows off domestic violence

Violence against women is a common predictor of future violence, but law enforcement still won't take it seriously 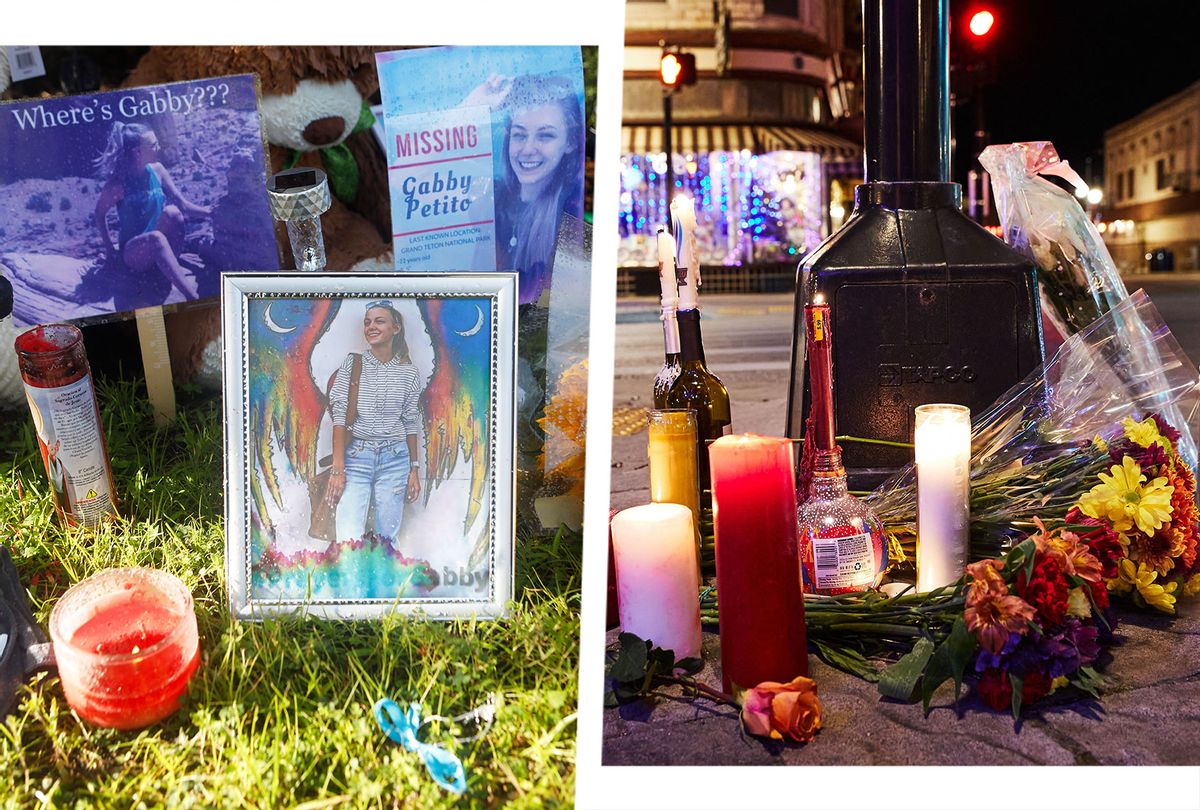 A makeshift memorial dedicated to missing woman Gabby Petito is located near City Hall on September 20, 2021 in North Port, Florida. A body has been found by authorities in Grand Teton National Park in Wyoming that fits the description of Petito, who went missing while on a cross-country trip with her boyfriend Brian Laundrie. | A makeshift memorial is pictured along the route of the parade on W Main Street in Waukesha, Wisconsin on November 22, 2021, the day after a vehicle drove through a Christmas parade killing five people. - US authorities identified the driver suspected of plowing into a Christmas parade in the Midwestern city of Waukesha, killing at least five and wounding dozens, as media reported he was fleeing a knife fight. (Photo illustration by Salon/Octavio Jones/Mustafa Hussain/AFP/Getty Images)
--

For hours Monday morning, the nation held its breath, awaiting word on the identity and motive of the alleged murderer who plowed his car over a Christmas parade in Waukesha, Wisconsin, killing five people and injuring dozens of others. There's been so much political violence lately, the killings happened so close to where Kyle Rittenhouse had recently been acquitted, and the method was a preferred one of right-wing terrorists. But, in this case, the suspect is Darrell E. Brooks Jr., a 39-year-old who was allegedly fleeing the scene of a knife fight. "There is no evidence this is a terrorist incident," Waukesha Police Chief Dan Thompson told reporters.

It is true that Brooks appears to have no motive related to electoral politics, nor does this seem to be a racist murder spree like the ones in El Paso, TX or Pittsburgh, PA. But the killing appears to be tied to one of the oldest and most common forms of power-related violence around: domestic violence.

Most people don't think of domestic violence as "political" because it's so common, it's as if it comes from nature, when it is in fact rooted in misogyny and male privilege. This failure to take domestic violence seriously leads, over and over again, to needless death and destruction. The Wisconsin case is looking very much to be another tragic example of that.

Shortly after police released Brooks's identity, the Washington Post reports, it came out that Brooks had a long criminal history, including two open cases – both related to domestic violence. "Criminal complaints detailed allegations that Brooks ran over the mother of his child with his red SUV on Nov. 2 and fired a gun after getting into 'a physical fight' with his nephew in July 2020."

Brooks was released on $1,000 bail, however, despite being charged with running over a woman with his car — the same method he allegedly used to murder five people on Sunday. The district attorney's office has already admitted that this bail was "inappropriately low," and promised to open an internal review. Sadly, however, this is no surprise to anyone who has witnessed the long-standing problems of law enforcement failures arond domestic violence.

The Wisconsin case comes close on the heels of another high profile killing, of 22-year-old Gabby Petito, in August. In the days before Petito's death, cops in Utah were called by a bystander who reported Petito's fiancé, Brian Laundrie, chasing and beating Petito. Body camera footage from the police, however, shows that instead of taking the situation seriously, the cops seemingly ignored signs that Petito was the victim and instead eagerly accepted a narrative that allowed them to avoid arresting Laundrie by blaming Petitio. They even leverage the threat of arrest against her to get her to go away.

RELATED: Can we stop domestic violence before it turns to murder?

The sexism that guides this kind of police reaction is sadly all too common. In the video, Petito is crying and upset, while Laundrie is calm and even cheerful. Instead of treating her distress and his calm as clear evidence that he was the aggressor and she the distraught victim, the cops leaned on sexist stereotypes about "hysterical" women and poor, beleagured men who have the task of controlling them. Unsurprisingly, Petito ended up murdered a few days later and Laundrie, the top suspect, fled. His remains were eventually found in a Florida reserve.

Cops often treat domestic violence victims with contempt, blaming them for wasting their time and threatening to arrest them. Victims of domestic violence are so often arrested alongside their abuser that multiple states are rewriting their laws to make it harder for cops to just round up a victim's self-defense into an excuse to arrest her, too. Just as the culture of policing has a racism problem, it has a sexism problem. Domestic violence is still seen, all too often, as a "personal" matter and not treated with the gravity that such assaults would receive if they happened in non-domestic situations.

That attitude is troubling on its face, as it's rooted in sexist ideas about men having a right to dominate and control women and other family members. It also suggests that violence is somehow more acceptable if it's perpetrated in the name of patriarchal control. But, as the Wisconsin killings suggest, the impact extends far beyond the danger that abusive men present to their families. Domestic violence is a red flag that a man is ready to commit violence against all sorts of people.

Research has repeatedly shown that domestic violence is at the center of most mass murders. In over half of mass shootings between 2009 and 2020, the killer murdered at least one former or current partner or a family member. And killers who target strangers frequently turn out to have a long history of domestic violence prior to the incident.  A report from Bloomberg found that 60% of mass shootings are either domestic violence incidents or committed by someone with a history of domestic violence. The Pulse nightclub shooter who killed 50 people in 2016, Omar Mateen, had a history of abusing his wife. The 2017 church shooting in Sutherland Springs, TX, that led to 26 deaths was committed by Devin Patrick Kelly, who was lashing out as his wife and her family.

By treating violence against women as a red flag for future violence, law enforcement could do much to actually prevent violence, instead of just show up after the fact, like they did in Waukesha. But instead, the law often treats domestic violence as a lesser concern. In 2005, the Supreme Court even went as far as to say the cops are under no obligation to enforce restraining orders, on the grounds that no "property interest" was at stake when a woman is being terrorized by an abuser. Just this week, a Maryland police officer convicted of rape and assault was put under "home detention" instead of prison, because the judge deemed that the victim did not suffer sufficient "psychological injury."

Men who hurt women are a threat to public safety, but the law keeps treating them like little more than a public nuisance. And the result is, over and over, deaths that could have been prevented.