Kyle Rittenhouse verdict: Just what the right needs to create a thousand more like him 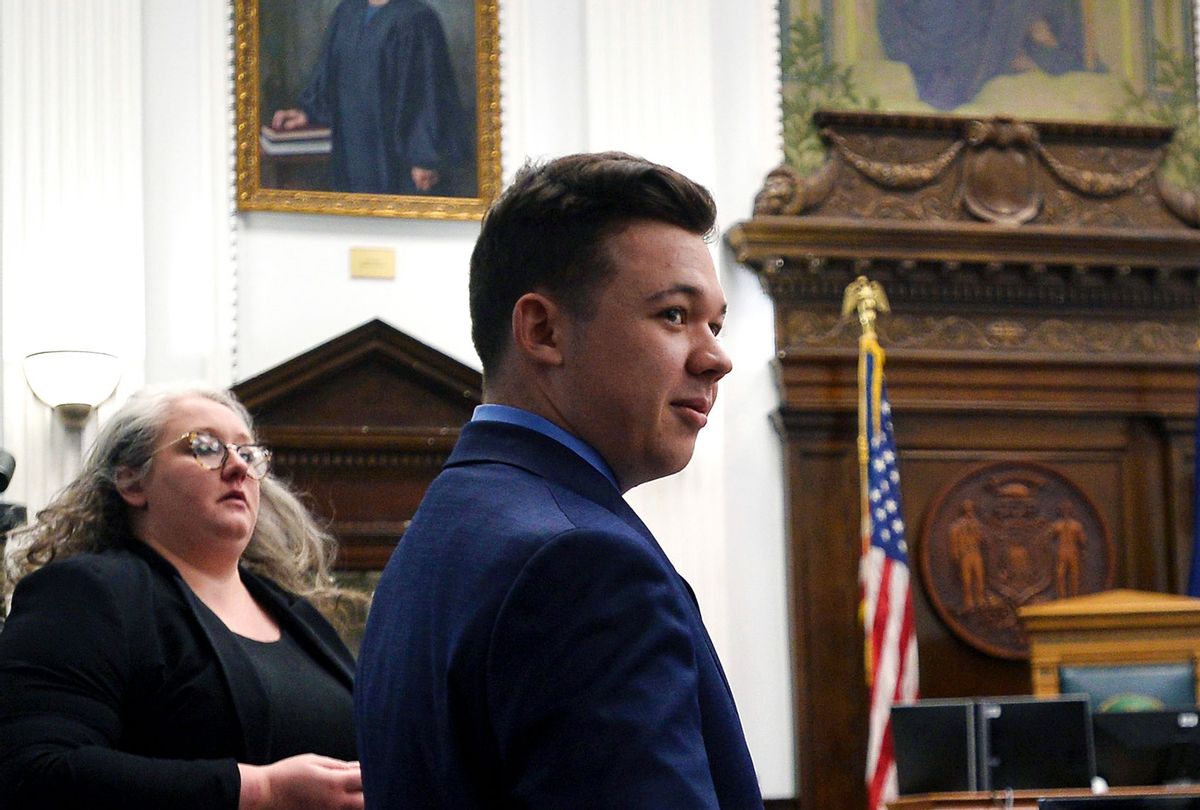 Kyle Rittenhouse, center, waits for the judge before the jury is relieved for the day during his trial at the Kenosha County Courthouse on November 18, 2021 in Kenosha, Wisconsin. (Sean Krajacic - Pool/Getty Images)
--

The only good thing that can be said about Friday's "not guilty" verdict in the case of Kyle Rittenhouse, the Kenosha shooter, is that the Trumpists are getting the icon they deserve.

Forget that ever-present right-wing fantasy of a muscular Aryan übermensch in a MAGA hat punching skinny black-clad leftist protesters, Rittenhouse is a more accurate avatar for the dweebs and dirtbags that make up the Trumpian right. No matter how many wannabe edgelord memes were made to celebrate Rittenhouse, there was no changing that he's just a doughy loser with a creepy and overbearing mom. His AR-15, meanwhile, made him look all the more pathetic, just by virtue of how badly he hoped it makes him look tough.

Unfortunately, as Rittenhouse's killing of two men and the maiming of another in the summer of 2020 proves, losers can still do a whole lot of damage, especially in a country with so much easy access to deadly weapons. That's why the U.S. has an ongoing school shooter problem, as self-pitying and entitled young men compete with each other to rack up body counts. Unfortunately, by successfully pleading self-defense in the killings of Joseph Rosenbaum and Anthony Huber, Rittenhouse has opened the door to an entirely new form of anti-social behavior for other crappy young men to emulate: political violence.

For years now, the so-called "alt-right" — or what one would traditionally call the fascist right — has been casting around desperately for some hero to rally around, a figurehead to tempt more people to transition from just being generic right-wing trolls to people who are ready for open violence. Nothing has really taken.

Early in the Donald Trump years, groups like the Proud Boys tried to turn a few of their members into heroes for beating up leftists, but they were too fringe and ineffectual to really make much of an impression outside of the ranks of the already recruited. The "Unite the Right" rally in Charlottesville, Virginia the summer of 2017 dramatically backfired after a white nationalist rioter killed a peaceful counterprotester and injured many others by running them over with his car.

The problem for fascists is that their recruitment and publicity strategy depends on being able to successfully portray themselves not as the aggressors, but as reactors. As I note in Friday's Standing Room Only newsletter, authoritarian propaganda always relies on a narrative that casts the right as acting in "self-defense" or out of "chivalrous" intent, whether it's Nazis portraying the Holocaust as a corrective to a supposed Jewish conspiracy or the KKK defending lynching as necessary to protect white womanhood. Even efforts to recast the January 6 insurrectionists as martyrs and "political prisoners" have largely fallen flat, due in no small part to the participants getting convicted on a conveyor belt.

What the fascist movement needed was a situation where there's some wiggle room to say the violence was defensible, and in Rittenhouse, it appears they have a live one.

This isn't Derek Chauvin kneeling on the neck of the helpless George Floyd or James Alex Fields running down Heather Heyer for waving an anti-racist sign. Rittenhouse's victims are easy for fascists to paint as "antifa," i.e. the stereotype of the white guy who uses leftist politics as cover for his own antisocial impulses. (There is a great deal of psychological projection going on with the right-wing "antifa" obsession.) That, plus the not guilty verdict, creates a sliver of justification for Rittenhouse's behavior, especially as figures like President Joe Biden are unwilling to disagree with the jury's decision.

President Biden on Rittenhouse verdict just now, arriving on the South Lawn: "I stand by what the jury has to say. The jury system works."

There is plenty of discussion and debate to be had about the legal soundness of Friday's verdict. But whether or not the verdict was "correct" in the narrow legal sense, for American society at large, this could really be a disaster.

Rittenhouse's case may be just what the far-right needed to convince the 8chan trolls hiding behind their Pepe the frog memes to pick up a gun and start making trouble in the offline world.

That said, nothing is certain.

Rittenhouse remains a nasty little creep, and this verdict doesn't make him any more charismatic as a leader. Plus, it's quite clear that, despite the Trumpian right's longing for violence, there's actually no need for it.

Republicans will be able to steal the 2024 election for Trump through bloodless methods like gerrymandering and election office interference. All previous efforts to turn violent authoritarians into national heroes for the right have largely failed, and past is predicator. There is a chance Rittenhouse fades away, his case a novelty that doesn't portend any serious uptick in violence.

Still, there's a reason this case captured the public imagination. It's the reason why so many on the right are so ready and eager to turn this adolescent weirdo into a folk hero. The authoritarian right clearly sees him as useful to tell the story they want to tell, one where the nation is under threat not from rising fascism or an ongoing pandemic, but from out-of-control "woke" leftists who need to be put down with violence. It's a lie, but one that they need very badly. Rittenhouse, they clearly believe, is the key to selling that lie.