The line between right-wing trolling and violence is collapsing

From "trigger the libs" to "pull the trigger on the libs": Right-wing trolling will inevitably lead to violence 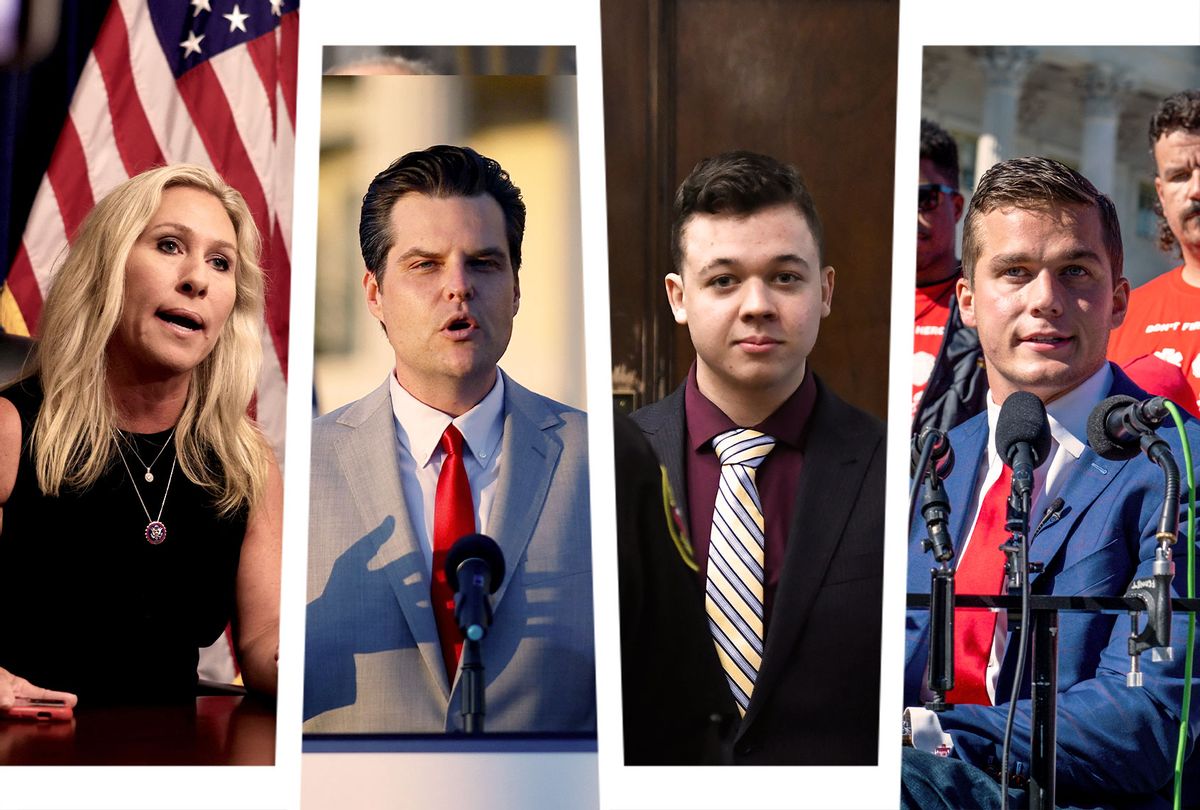 After the acquittal of Kyle Rittenhouse on Friday afternoon, right-wing trolls — many of whom are elected members of Congress — were ecstatic at this prime opportunity to trigger the liberals. Reps. Matt Gaetz of Florida, Madison Cawthorne of North Carolina, and Paul Gosar of Arizona — all Republicans more interested in trolling than governance — made showily public offers of an internship to Rittenhouse. Cawthorne even took it to the next level, instructing his supporters to "be armed and dangerous." Never one to be out-trolled, Rep. Marjorie Taylor Greene of Georgia let loose with some truly unhinged tweets about "radical Marxists" who are trying to start "a race war," proclaiming that "gun rights are the only thing holding back the Communist Revolution the Democrats are waging." And on the Senate side, Ted Cruz of Texas attacked the "corrupt corporate media," skillfully targeting the very people he needs to amplify his message and get that sweet trolling attention.

Right-wing pundits joined in on all the gleeful trolling, as well.

Ann Coulter tweeted a meme equating Rittenhouse with superheroes, and Donald Trump Jr., forever trying and failing at being a Twitter wit, wrote, "The Rittenhouse jury just gave Biden his second colonoscopy of the day." Multiple right-wingers on social media wrote songs to honor Rittenhouse. On Friday, popular and trollish YouTuber Steven Crowder celebrated the verdict by insisting, "it's so wrong that we teach young men that violence is immoral," and encouraged viewers to follow in Rittenhouse's lead by taking up arms against Black Lives Matter protesters. Tucker Carlson, King of the Trolls, will host Rittenhouse on his Fox News show and insisted that he's "not a racist person." This claim is impossible, of course, to square with the photos taken earlier this year in a Wisconsin bar where Rittenhouse partied with Proud Boys and flashed white supremacist signs at the camera.

All of these provocations worked as intended: They got attention and garnered liberal outrage. "Liberal tears" are the most valuable commodity in Republican circles these days, and nothing brings forth tears like senseless violence. For those who subsist on liberal outrage, the dunks were easy and plentiful, because it turns out those silly liberals really do make frowny faces over the celebration of political violence.

The right is reacting to this verdict like they're sports fans whose team just vanquished a rival team in the Superbowl. The excitement on the right was palpable, but also measurable. As an analysis from Raw Story shows, Facebook exploded with conservative celebrations of the verdict, with "18 of the top 20 most engaged page links in the world" originating with conservative American pages. And the pleasure of the moment was explicitly tied to joy over how upset liberals — or at least those perceived as liberals — were. Right-wing figurehead Dan Bongino, who is reliably one of the most popular figures on Facebook, posted a link claiming Chuck Todd "nearly cries" after the verdict. The post garnered over 3,000 shares and 68,000 reactions, the majority of which were the "laughing" emoji.

It's not just that this behavior is tasteless. It also illustrates how violence is the logical endpoint of the right-wing obsession with trolling liberals. If your goal is provoking a reaction, then violence is surely the most efficient way to do it. Unlike mean tweets and "f*ck your feelings" T-shirts, violence simply cannot be ignored. By celebrating this violence, congressional Republicans and right-wing media are openly inviting more of it, because the reward of upsetting people on the left is just so delicious. The distinction between right-wing trolling and violence is collapsing.

To be certain, the escalation of violence-as-trolling has been going on for awhile now. As Eric Boehler wrote in his Press Run newsletter, "The flashpoints of Republicans and conservatives promoting political violence have become ceaseless, to the point of frightening normalization," to the point where polling data suggests "that as many as 21 million Americans think that the use of force is justified to restore Donald Trump to the presidency."

RELATED: Birth of a "Troll Nation": Amanda Marcotte on how and why conservatives embraced the dark side

Much of the month has been dominated by a story about Gosar tweeting out a fan-made video that depicts him murdering President Joe Biden and Democratic Rep. Alexandria Ocasio-Cortez of New York. The Democratic-controlled House responded to this unsubtle threat by censuring Gosar and stripping him of his committee assignments, but nearly all Republicans stood by Gosar. The excuse used to defend Gosar's behavior was that he was just trolling liberals for fun. Gosar's digital director even put out a statement saying, "Everyone needs to relax. The left doesn't get meme culture. They have no joy."

However, right-wing "joy" is not mutually exclusive from violence.

Gosar's tweet was both trolling to get a reaction from the left and a threat of violence. Trolling is a crucial aspect to both amplifying violent threats and helping conservatives hype each other up for more violence. That's why Gosar doubled down by retweeting the video minutes after being censured for it. The message is clear: If you love outraging the left, then violence is the swiftest way to do it.

Even Rittenhouse's behavior prior to killing two people at a Kenosha, Wisconsin protest last year embodies this troll logic. As Farhad Manjoo of the New York Times observed, Rittenhouse's presence at the protest was clearly a provocation. Rittenhouse carried a showy AR-15 "in part because the rifle "looked cool," and the gun "seemed to invite conflict." Popular right-wing troll Drew Hernandez was at the protest that night, and testified in court that, when some protesters saw Rittenhouse and other men with guns, "they immediately attempted to agitate them, to try and start some conflict with them."

In other words, Rittenhouse's AR-15 functioned both as a troll and as a deadly weapon. The distinction between trying to "trigger the liberals" and actually pulling the trigger on liberals collapsed completely the night Rittenhouse shot three people, killing two. He certainly got what every right-wing troll wants, which is an outraged and dramatic reaction from people he perceived as liberals. The result was two dead bodies — and another opportunity for GOP leaders to troll some more, further reinforcing the idea that, for those who live for triggering the liberals, nothing works better to get a reaction than actual violence.