“We may reach out to him and see if he’d be interested in helping the country in additional ways," Gaetz said 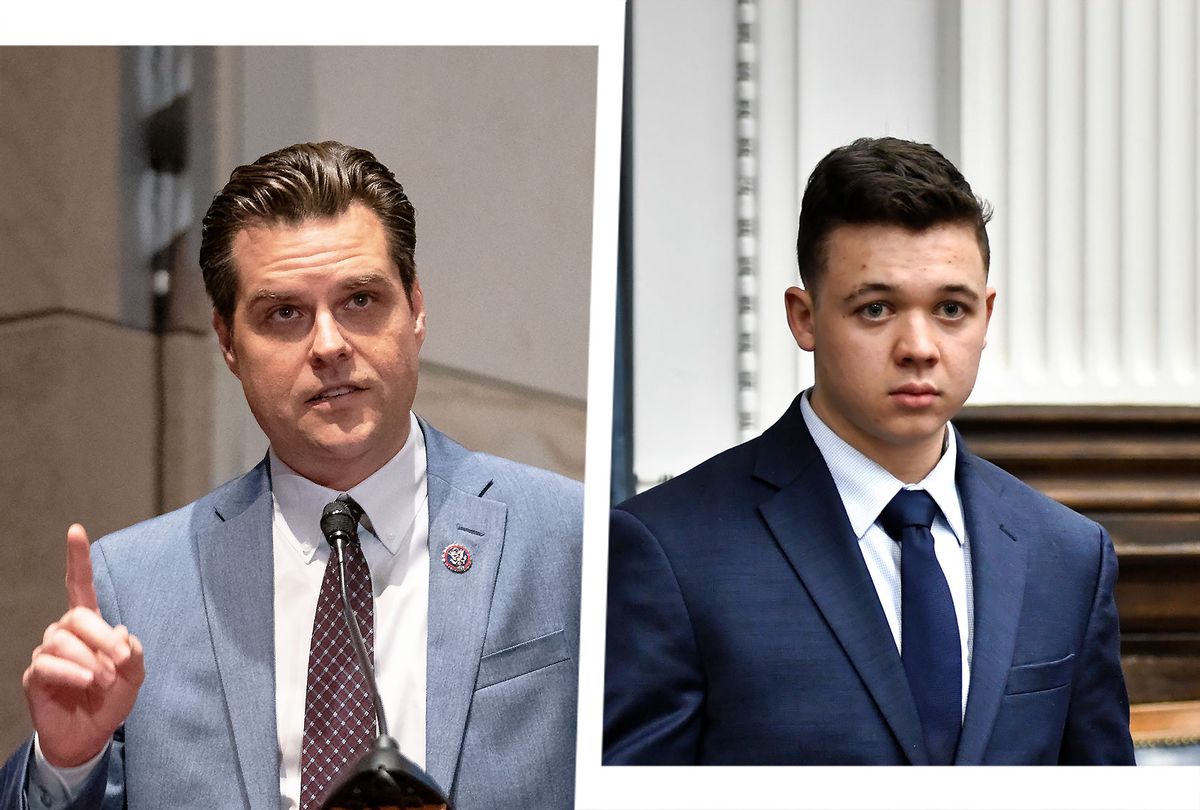 Rep. Matt Gaetz, R-Fla., suggested on Wednesday that his office is open to hiring Kyle Rittenhouse as a congressional intern if the accused gunman is acquitted, arguing that the 18-year-old is "not guilty" for the killing of two men during unrest in Kenosha, Wisconsin last summer.

"You know what, Kyle Rittenhouse would probably make a good congressional intern," Gaetz said Wednesday during an appearance on Newsmax. "We may reach out to him and see if he'd be interested in helping the country in additional ways."

The Florida lawmaker continued: "He is not guilty. He deserves a not guilty verdict and I sure hope he gets it."

RELATED: The Rittenhouse effect: Republicans want a Stasi of their own

Thursday marks the third day of jury deliberations for Rittenhouse's trial, which began on November 1. In August of 2020, Rittenhouse drove from his home of Antioch, Illinois to Kenosha, where he apparently sought to defend a car dealership from the threat of looting in the aftermath of the police shooting of Jacob Blake. During an armed confrontation – the details of which were litigated at trial – Rittenhouse fatally shot two men and injured another with an AR-15-style rifle.

Rittenhouse has pleaded not guilty, claiming that he acted in self-defense, while prosecutors argue that the then-17-year-old acted like a vigilante. "I defended myself," Rittenhouse said during the trial last week. The teen faces life imprisonment if convicted.

Over the last several weeks, the televised trial has been closely followed by politicians, pundits, and activists, who have weighed in the proceedings as they relate to racial justice, white privilege, Black Lives Matter, and gun violence.

In a Fox News interview this week, conservative author J.D. Vance, currently vying to fill a U.S. Senate vacancy for Ohio, called Rittenhouse's trial a "farce," adding that "it's child abuse masquerading as justice in this country."

"The kind of people who thought O.J Simpson was innocent are the same people who believe that Kyle Rittenhouse is guilty," echoed right-wing commentator Candace Owens last week. "Facts don't matter to emotionally-indoctrinated zombies. Only feelings do."

But those on the left have sung a markedly different tune.

"It is literally impossible to imagine a 17-year-old Black kid traveling to a different state … who shoots three people, kills two – who, right now, isn't in prison," Butler told POLITICO.

RELATED: Beneath the Rittenhouse trial: Grim truths about the state of America

Rep. Hakeem Jeffries, D-N.Y., spoke about the case with marked candidness for a federal lawmaker, tweeting on Wednesday: "Lock up Kyle Rittenhouse and throw away the key."

Rittenhouse's defense team has already filed a motion for a mistrial with prejudice, according to CNN, meaning that Rittenhouse would be protected from any state bid to retry the case going forward.

For his part, Gaetz also railed against the recent sentencing of 34-year-old Jacob Chansley, the "QAnon Shaman" notorious for breaching the U.S. Senate floor on January 6 while donning a horned fur headdress. On Wednesday, Chansley was sentenced to three years in prison on a single count of felony obstruction of an official proceeding.

"This QAnon Shaman is a relatively harmless, nonviolent vegan and the notion that he has to be in prison for three and a half years to settle some sort of political score defies justice," Gaetz continued.