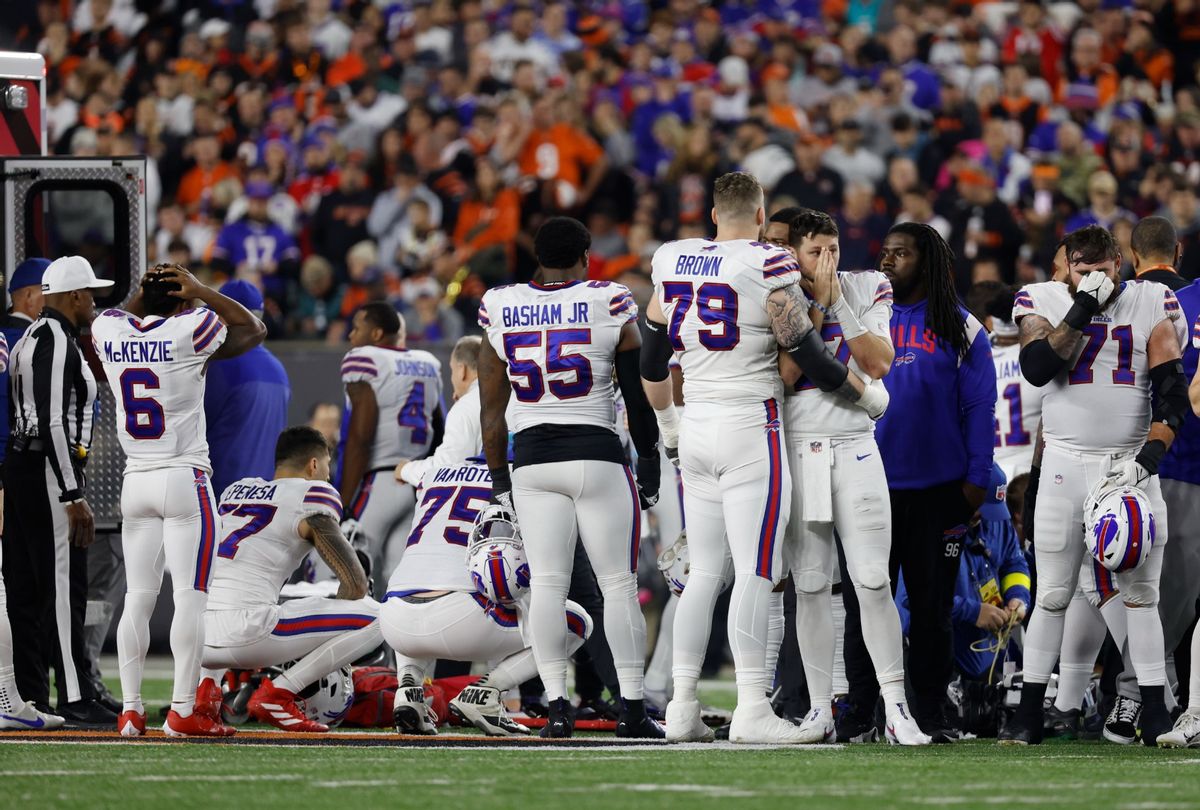 Buffalo Bills players react after teammate Damar Hamlin was injured against the Cincinnati Bengals during the first quarter at Paycor Stadium on January 02, 2023 in Cincinnati, Ohio. (Kirk Irwin/Getty Images)
--

Hamlin, a 24-year-old safety for the Buffalo Bills, suffered a cardiac arrest and collapsed on the field after a scary hit to his chest during the Monday Night Football matchup against the Cincinnati Bengals. Players surrounded Hamlin as he received CPR for about nine minutes before being taken off the field in an ambulance. The game was postponed and Hamlin was taken to a local hospital.

"Damar Hamlin suffered a cardiac arrest following a hit in the Buffalo Bills' game versus the Cincinnati Bengals. His heartbeat was restored on the field and he was transferred to the University of Cincinnati Medical Center for further testing and treatment. He is currently sedated and listed in critical condition," the Bills said in a statement early Tuesday.

The scary moment led to an outpouring of support and prayers for the young second-year player and an online toy drive fundraiser launched by Hamlin quickly raised more than $3 million in donations in the hours after his collapse. But some right-wing anti-vaccine conspiracy theorists used the incident to stoke a widely debunked claim that the COVID vaccine is causing young, healthy athletes to suddenly collapse.

"This is a tragic and all too familiar sight right now: Athletes dropping suddenly," tweeted Charlie Kirk, the head of the Trump-allied Turning Point USA.

"There have been too many recent #diedsuddenly cases to deny it anymore," wrote failed Nevada GOP gubernatorial candidate Joey Gilbert.

"Prior to 2021, Athletes collapsing on the field was NOT a normal event. This is becoming an undeniable (and extremely concerning) pattern," insisted Lauren Witzke, a conservative commentator and failed Delaware GOP Senate candidate.

"I know what everyone with any common sense is thinking. This isn't the first time a pro athlete had this happen," wrote right-wing commentator Grant Stinchfield, blaming the "NFL mandate" even though the NFL currently has no vaccine requirement for players.

The conspiracy theory has swirled in conservative circles since early in the pandemic and has been boosted by Republicans like Sen. Ron Johnson, R-Wis., who claimed in an interview with Kirk that he has heard "story after story" about "all these athletes dropping dead on the field" after receiving the vaccine.

Though there have been rare instances of myocarditis, a form of heart inflammation, in people who have received the vaccine, the risk of suffering myocarditis from COVID itself is about 100 times higher. Conspiracy theorists have cited reports on the CDC's Vaccine Adverse Event Reporting System (VAERS), which allows anyone to submit a report and the reports are not verified.

"The numbers are basically meaningless," wrote Washington Post fact-checker Glenn Kessler, adding that "this claim has been debunked repeatedly. The story of athletes dropping dead from coronavirus vaccines has its roots in mysterious Austrian websites with ties to that country's far-right populist party, the Freedom Party. Those stories were then recycled by right-wing media in the United States and then eventually came out of the mouth of a U.S. senator."

Rep. Adam Kinzinger, R-Ill., condemned the conspiracy theorists for trying to use the alarming episode to advance their baseless claims.

"Sick disgusting human beings.  This isn't politics this is straight up heartless, cold, evil," he wrote on Twitter.

Kinzinger specifically called out Kirk in another tweet, calling him the "biggest piece of human garbage that can possibly exist right now."

"Using this tragedy for your BS lies is sick," he wrote.

"The antivaxers who watched a potential lethal injury to a young man and decided that it was the perfect time to blame vaccines are beneath contempt," tweeted Dr. Jonathan Reiner, a cardiologist at The George Washington University Hospital. "The worst this country has to offer. Climb back under your rocks."