Insurrection by other means: The far right is using anti-vax sentiment to radicalize Republicans

The weekend's anti-vaccine rally in D.C. was heavy on violence-inspiring rhetoric and fascist recruitment 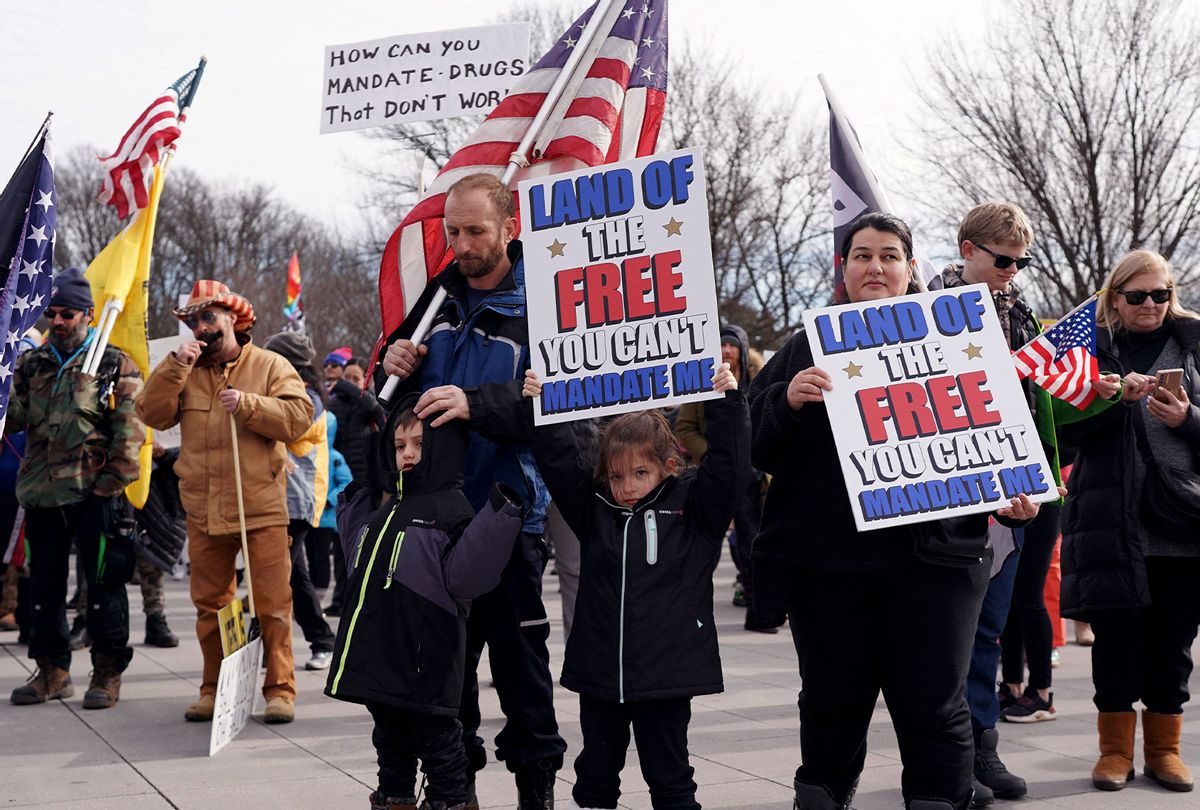 Demonstrators participate in a Defeat the Mandates march in Washington, DC, on January 23, 2022. - Demonstrators are protesting mask and Covid-19 vaccination mandates. (STEFANI REYNOLDS/AFP via Getty Images)
--

The "Defeat the Mandates" rally on Sunday in Washington D.C. was not exactly the blockbuster event, size-wise, organizers had hoped to turn out. The event's planners had predicted 20,000 people, but more reasonable estimates suggested it was fewer than half that who actually showed. But despite the paltry turnout, the event was deeply troubling to experts who monitor the far-right.

The tone and tenor of the occasion were so hyperbolic and self-aggrandizing, creating exactly the sort of conditions that will further radicalize ordinary Republicans and stoke more right-wing violence. Disgustingly, one of the main speakers was Robert F. Kennedy Jr., the son of the Democratic scion who was assassinated in 1968. Kennedy has spent the past few years becoming an increasingly unhinged anti-vaccine activist — but his presence on Sunday was even more alarming considering the role that the Kennedy family plays in the imaginations of the QAnon cult.

Many QAnoners believe that JFK and JFK Jr. — Kennedy's deceased uncle and first cousin, respectively — are still alive and secretly supporting Donald Trump. Simply by showing up, Kennedy validated these kinds of fringe beliefs. The situation got much worse when he actually spoke and told the crowd that anti-vaxxers have it worse than Jews did during the Holocaust.

"Even in Hitler Germany (sic), you could, you could cross the Alps into Switzerland. You could hide in an attic, like Anne Frank did," Kennedy said. "I visited, in 1962, East Germany with my father and met people who had climbed the wall and escaped, so it was possible. Many died, true, but it was possible."

Kennedy's analogy is incoherent for obvious reasons — does he think East Germany was a Nazi state or not know that Frank died at the Bergen-Belsen concentration camp? — and was widely criticized for being offensive. The Auschwitz Memorial responded with a tweet describing Kennedy's speech as "a sad symptom of moral & intellectual decay."

But the speech wasn't just offensive — it's also dangerous.

It doesn't matter that Kennedy didn't come right out and call on people to commit violence. It's inciting to tell anti-vaxxers they are victims of oppression worse than what the Jews faced under the Nazis. It justifies violence as a form of self-defense. This is why experts on far-right organizing and violence were alarmed. Ben Collins, an NBC reporter who has been covering the rise of American fascism, was especially concerned.

Most people are wildly underestimating how both large and rhetorically violent this anti-vaccine movement is.

They are a gigantic, one-issue political movement that will eventually coalesce behind one candidate and make extreme demands before 2024.

Kennedy was just one of many who made the comparison Sunday, both onstage and in the crowd. There was also a lot of comparing the plight of anti-vaxxers to that of Black Americans living under segregation. Meanwhile, rally organizers pretended theirs was a message of diversity and tolerance. Prominent anti-vaccine activist and rally speaker Del Bigtree insisted this "is a movement of unity," and "if you have any problems with race, or religion, or sexual preference then I don't think you're truly representing this movement."

In reality, however, as Will Carless of USA Today wrote, hate groups and far-right activists are using the anti-vaccine movement to recruit, both online and off. Brian Hughes of the Polarization and Extremism Research and Innovation Lab at American University explained to Carless that the far-right sees "anti-vaccine sentiment and COVID denialism as a market that they can exploit for views, for clicks and for merchandise sales." Indeed, these kinds of groups were heavily represented in the crowd at the rally. As Salon alum and current Daily Beast reporter Zachary Petrizzo noted, "Far-right fanatics were out in full force, from the extremist members of the hate group Proud Boy to rank-and-file supporters who consume everything that conspiracy theorist Alex Jones utters."

But it was also true that more ordinary Republicans also showed up. There were even people claiming to be disillusioned Democrats, although this is a common enough lie on the right and should always be taken with a grain of salt. Either way, what is crucial to understand is that the far-right and hate groups are plugging into the anti-vaccine discourse to lure conservatives into becoming even more fascistic and more supportive of the violent rejection of democracy. (Similarly, fascists have also been using anti-abortion demonstrations to recruit.)

For the past year, being anti-vaccine has been an easy — if often deadly — way for ordinary Republicans to express their hatred of President Joe Biden and to spite Democrats. Fox News and GOP leaders have encouraged their followers to reject the vaccine as a way to show solidarity on the right and make life harder for those who voted against Trump. It's ugly and dangerous behavior — but it has been effective at meeting the liberal-triggering goals.

Biden's approval ratings have been dropping as a result of the prolonged pandemic. Democratic voters, who are more likely to make personal sacrifices like mask-wearing or social distancing to curb the pandemic, have been made to suffer the indignities stemming from a prolonged pandemic, even if their vaccinated status has largely prevented them from being the ones filling up hospitals. Republicans are three times as likely to be unvaccinated as Democrats. That's why anti-vaccine ideology makes a perfect recruiting ground for fascists.

There are a lot of Republican voters whose hatred and desire to spite Democrats has led them to gamble with their own lives by refusing vaccines. It's not much of a leap to believe such folks are open to taking things to the next level, to reject democracy and embrace an authoritarian ideology for the same vindictive reasons. The anti-vaccine discourse is a perfect space to blur the lines between being a petty partisan who is mad about losing an election and being an outright fascist who no longer believes in holding free and fair elections.