Insurrection by other means: Republicans are ready to die of COVID to spite Biden, Democrats

Why are Trump refusing the vaccine and risking mass death? It's their sacrifice in the war against Joe Biden 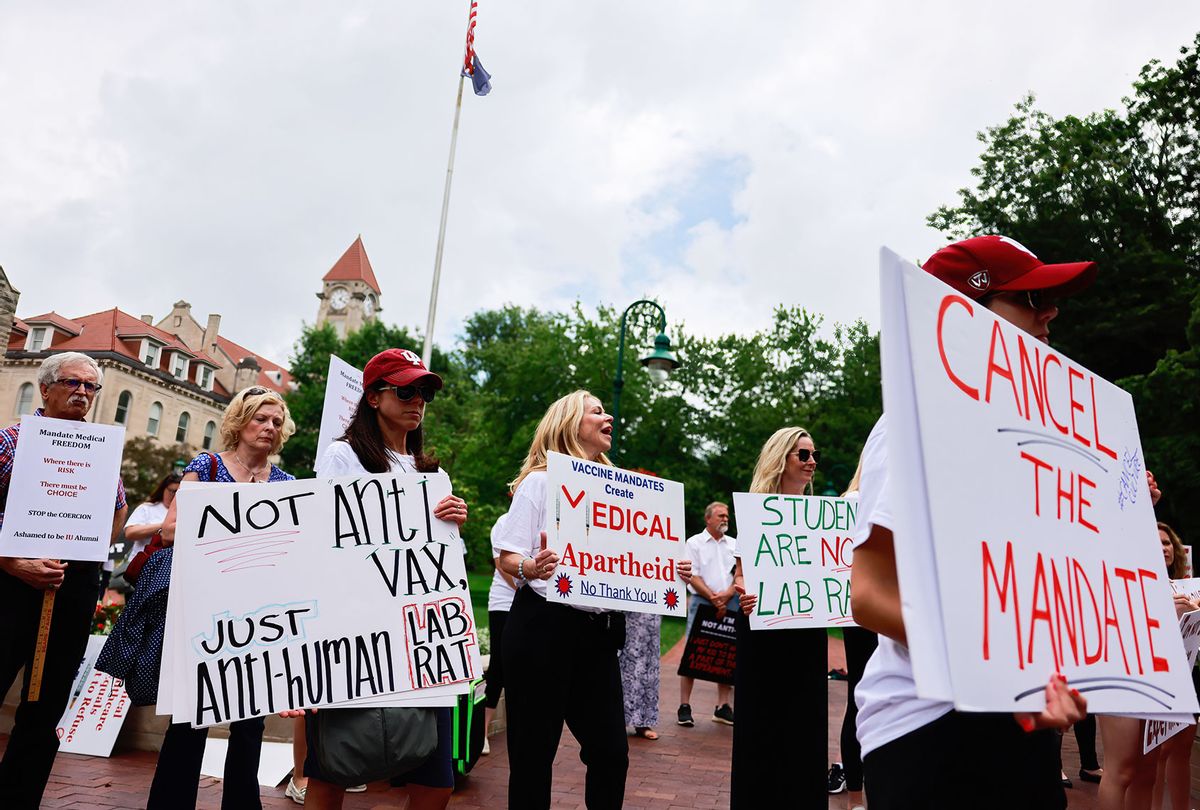 Protesters hold placards during the demonstration. Anti-vaxxers and anti-maskers gathered at Indiana University's Sample Gates to protest against mandatory Covid vaccinations IU is requiring for students, staff and faculty during the upcoming fall semester. (Jeremy Hogan/SOPA Images/LightRocket via Getty Images)
--

COVID-19 is increasingly a red-state phenomenon. Among the many statistical analyses that demonstrate the remarkable effectiveness of the vaccines, perhaps the starkest are those that reveal a dramatic divergence in pandemic severity between red and blue states. As David Leonhardt of the New York Times pointed out on Monday, before we had vaccines, there "simply was not a strong partisan pattern" to the spread of disease. But after vaccines became widely available — and especially as Republican voters refused to vaccinate in large numbers — "a gap in Covid's death toll quickly emerged." Now that difference "between red and blue America has grown faster over the past month," Leonhardt wrote, to the point where counties where a large majority voted for Donald Trump have a death rate "more than three times higher than the rate in heavily Biden counties."

Leonhardt tweeted out these statistics in chart form, as well.

The vaccines proved so powerful, and the partisan attitudes toward them so different, that a gap in Covid's death toll quickly emerged.

It has grown over the course of this year and is now at its widest point. pic.twitter.com/pyWKHl4Ann

Late last month, Duke sociologist Kieran Healy broke down the county-level data even further, showing that the death rate is proportional to the strength of Republican partisanship.

It's tempting, both on the left and in mainstream media circles, to write off these differences as a matter of ignorance versus information. Leonhardt gently phrased this narrative in his piece as a matter of "irrational fears about vaccine" caused by disinformation "promoted by right-wing media." Social media takes are a little more blunt, about how dumb yokels in red areas are stupidly falling for vaccine misinformation while the big brains of blue America believe in science.

But the truth is much darker than that. As one person who replied to Leonhardt on Twitter noted, it's less about irrational fears of the shot and more that it "became a badge of honor to remain unvaccinated" and was even seen, among many Republicans, as "[t]raitorous to cave" and get the jab. Yes, there are some morons who really believe that the disease is a hoax or that vaccines contain sinister ingredients. But it's unlikely that most conservatives are that dense. After all, they tend to live in communities where hospitals are overwhelmed with COVID-19 patients and Facebook memorials to the dead are popping up on a daily basis. Millions of them can see the toll that vaccine resistance is taking on their communities, but they're digging their heels in anyway.

No, the darker and harder truth is that this isn't really about intelligence or ignorance. It's about ideology, and specifically, about how far a good chunk of the GOP base has become radicalized toward the politics of insurrection. More than half of Trump voters claim they want to secede from the union, and nearly a third say violence is a legitimate means to impose their will on the rest of the country. Endorsement of violence rises to nearly half of Republicans if the question is abstracted to the idea that "a time will come" for such tactics.

In light of this, the willingness to roll the dice with COVID-19 makes more sense. Vaccine refusal is being presented in right-wing media as a noble act of resistance against Democratic "tyranny." Any effort to prevent the disease — even among children — is increasingly viewed as an attack on red-state America. After the Jan. 6 insurrection failed, the radicalized members of the GOP have had few options to exercise their militaristic fantasies against Joe Biden's administration. Refusing the vaccine isn't as sexy as taking up arms against the government, but it still plays with the glamorous notion of putting your body on the line for your political views — until the threat stops being abstract and you end up in the hospital, that is. War is always more romantic in fantasies than in reality.

Notably, Republican leaders aren't much interested in risking their own lives through vaccine refusal. Fox News even has a corporate vaccine mandate. But that's even more evidence that vaccine refusal is structured along the metaphor of wars and armies. The base voters are the foot soldiers, risking it all on the front lines, while the leaders give orders from the safety of their vaccinated bubble.

This whole thing may sound ridiculous, but, in truth, the strategy is a smashing success — at least so far. This was evidenced by the results of last week's off-year election, when Democrats — demoralized by many things, but especially the ongoing pandemic — failed to turn out in numbers to compete with the fired-up GOP base. If this continues into the midterms, the already dim prospects for Democrats will get much worse.

This is what Republicans need to happen if Trump's next round of election-theft scheming is to be successful. The Jan. 6 insurrection was always doomed to failure because Republicans simply didn't have the votes to give Trump what he wanted, which was the overthrow of the 2020 election results. Being able to steal the White House for Trump in 2024 depends on Republicans seizing enough power electorally between now and then to invalidate Democratic votes on both the state and federal level. Refusing vaccines and prolonging the pandemic is one small way that the average GOP voter can do their part to help make the next coup stick.

That said, the situation is not hopeless. For one thing, evidence shows that GOP vaccine refusal can mostly be overcome with vaccine mandates. The resistance fantasies of vaccine refusers tend to crumple pretty quickly once real consequences come into play, as the relentless drumbeat of deathbed-regret stories demonstrates. Moreover, as Leonhardt writes, "red America has probably built up more natural immunity to Covid — from prior infections — than blue America." Immunity from infection is less effective than immunity from vaccination, but both are contributing to the rapid decline in case rates since the summer peak. There's a real chance that the army of vaccine refusers falls apart like so many armies do — by attrition. By this time next year, the story may very well be about how Republicans bet big on this vaccine-refusal strategy, and the only thing they accomplished was killing off their own people by the thousands.

More from Salon on the vaccine conflict: