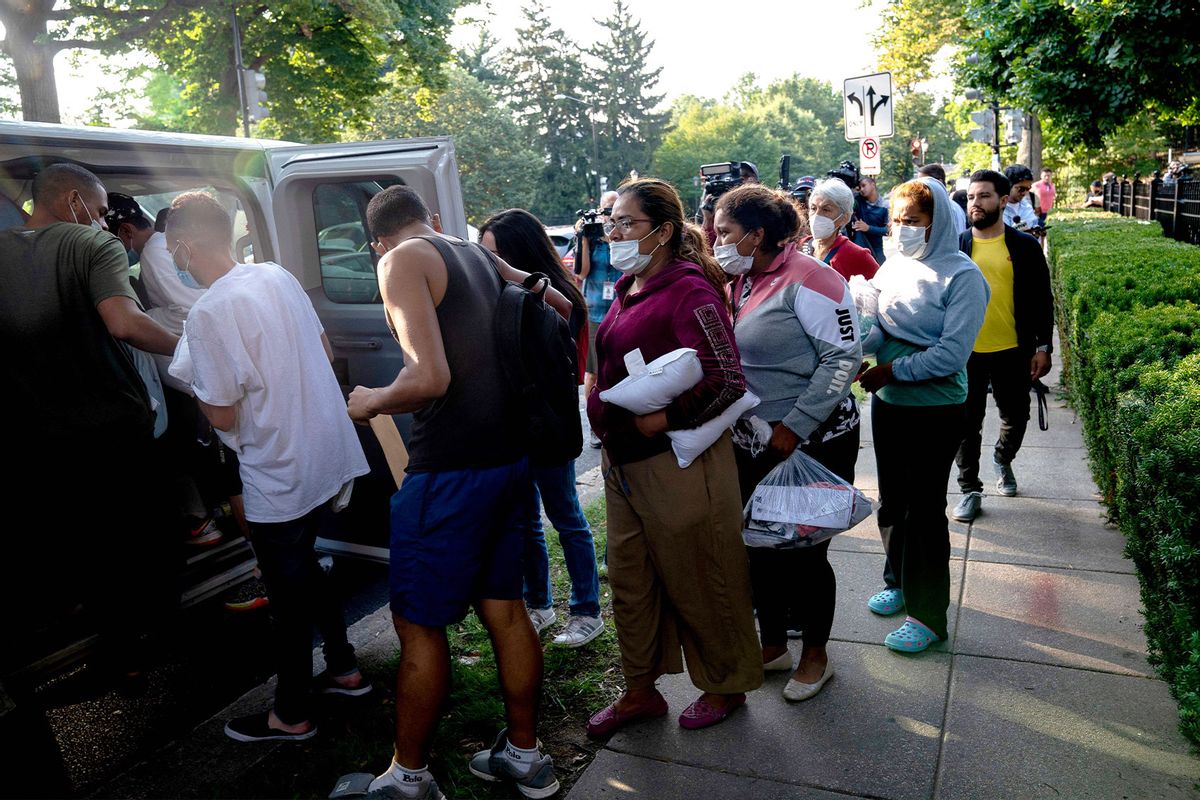 Migrants from Venezuela, who boarded a bus in Texas, wait to be transported to a local church by volunteers after being dropped off outside the residence of US Vice President Kamala Harris, at the Naval Observatory in Washington, DC, on September 15, 2022. (STEFANI REYNOLDS/AFP via Getty Images)
--

Once again, the cruelty is the whole damn point.

Today's Republican Party and "conservative" movement are committed to what has been described as "sado-politics," meaning a political worldview and strategy in which causing pain, misery, death and other suffering is both a means to win power and control and also a goal in and of itself. Sado-politics is also an extension and reflection of fascism, authoritarianism and other forms of illiberal and corrupt power.

In my 2018 interview with historian Timothy Snyder for Salon, he offered further context about the role of political sadism in America's (and the world's) democracy crisis:

"Sadopopulism" is the notion that you're doing half of populism. You promise people things, but then when you get power you have no intention of even trying to implement any policy on behalf of the people. Instead, you deliberately make the suffering worse for your critical constituency. The people who got Trump into office, for example, are traditional Republican voters plus people in counties who are doing badly in terms of health care and other measures, and who need help.

Under Trump, of course, things will just get worse in terms of both the opioid addictions and in terms of wealth inequality. But that's OK, because the logic of sadopopulism is that pain is a resource. Sadopopulist leaders like Trump use that pain to create a story about who's actually at fault. The way politics works in that model is that government doesn't solve your problems, it blames your problems on other people -- and it creates the cycle that goes around over and over and over again. I started talking about sadopopulism because I got tired of people talking about populism.

The Republican Party and the "conservative" movement are committed to sado-politics, and not as a passing fad, a phase, a "flirtation" or an outlier. Those values and that behavior are now fundamental and foundational for today's American right. If we consider contemporary conservative politics as a religious movement, cruelty is both a sacrament and a tenet of the faith.

Even more troubling for people of conscience is the undeniable fact that neofascist and right-wing leaders who engage in sado-politics genuinely believe they are good people doing the right thing. Most of them have even convinced themselves that they are victims of an unfair system and nurse grievances even as they inflict pain on innocent and vulnerable people.

Perhaps the most vivid recent example of the Republican Party's political sadism came on Christmas Eve, when Gov. Greg Abbott of Texas sent more than 100 migrants to Vice President Kamala Harris' official residence, on what turned out to be the coldest night Washington has experienced in decades. In a statement, White House spokesperson Abdullah Hasan said that Abbott had "abandoned children on the side of the road in below freezing temperatures on Christmas Eve without coordinating with any Federal or local authorities," calling it "a cruel, dangerous and shameful stunt." Vanity Fair reported:

Late Saturday night [Dec. 24], buses full of migrant families arrived outside the Naval Observatory, where the vice president's home is located, from Texas. "Volunteers scrambled to meet the asylum seekers after the buses, which were scheduled to arrive in New York on Christmas Day, were rerouted due to the winter weather," the Washington Post reported. Relief agencies SAMU First Response and the Migrant Solidarity Mutual Aid Network were on the ground Saturday evening to help with the arrivals, providing blankets to the migrants — some of whom were "wearing only T-shirts in the freezing weather," according to CNN — and transporting them to a local church where they were given food and other resources.

Language is critical in making sense of such acts of cruelty. Taking human beings in desperate need, lying to them about offering aid and assistance, and then abandoning them hundreds or thousands of miles away like human garbage is not a "prank," a "stunt" or an act of "trolling." Such language minimizes the evil and the human suffering.

In reality what Abbott, Florida Gov. Ron DeSantis and other Republican-fascists have done with their cruelty and violence against immigrants, migrants, and refugees and other targeted groups is to create a spectacle of cruelty, a 21st-century human zoo. Their goal is to construct boundaries that define which types of human bodies can be subjected to violence without consequence by those who hold power and those who serve them.

Transporting desperate human beings hundreds of miles and abandoning them on Christmas Eve is not a "stunt." It's a sadistic and evil spectacle.

To express outrage, disgust and condemnation in response to Abbott's Christmas Eve cruelty is understandable but insufficient. Such words are easy to use in superficial op-eds, 90-second TV interviews, talking-head hot takes from the commentariat, and obligatory statements from respectable political leaders. But the more difficult and more important kinds of  thinking and truth-telling should focus on the logic and ultimate goal of the American right's sadism, and its implications and deep historical origins.

Unfortunately, that's precisely the kind of dangerous thinking that the mainstream media and its gatekeepers, along with the larger political class, are eager to avoid. It risks exposing the country's deep moral and political crises, which far predate the political ascendancy of Donald Trump.

To paraphrase philosopher Cornel West, Abbott's acts of cruelty against refugees and immigrants illustrate a larger project by the Republican fascists and the white right, whose goal is to make Black and brown people (and members of other targeted groups) feel unsafe, insecure, subject to arbitrary violence, and hated simply for who they are. The ultimate goal is to turn human beings into objects so that their systematic abuse and mistreatment becomes seen as "legitimate" and "natural."

Violence and destruction are both the main organizing principles of fascism and other forms of authoritarianism and illiberal politics, and also the logical if not inevitable outcome of such ideologies.

Too many "average" people in "middle America" (thinly veiled code for "white people") have convinced themselves that the Republican Party's cruelty and sadism will not hurt them. That is shortsighted and historically ignorant. Forces such as those ultimately spare almost no one, including bystanders who may wish to claim that they are "uninvolved" in politics and hold no particular fixed opinions. Consider the impact of the COVID pandemic that has killed more than a million Americans, or the fact that right-wing extremists on the Supreme Court have taken away women's reproductive rights.

In a 2017 essay, Chris Hedges reflected on James Baldwin's insights into how "whiteness" hurts white people:

As the white race turns on itself in an age of diminishing resources it is in the vital interest of the white underclass to understand what its elites and its empire are actually about. These lies, Baldwin warned, will ultimately have fatal consequences for America.

"There are days, this is one of them, when you wonder what your role is in this country and what your future is in it," Baldwin said. "How precisely you're going to reconcile yourself to your situation here and how you are going to communicate to the vast, heedless, unthinking, cruel white majority that you are here. I'm terrified at the moral apathy — the death of the heart — which is happening in my country. These people have deluded themselves for so long that they really don't think I'm human."

When the Republican fascists and their allies engage in acts of political sadism against those deemed not to be "real Americans," they are actually normalizing the use of such violence and cruelty and death as a weapon against all people. The migrants and refugees who became part of a white supremacist Christmas Eve spectacle are not alien or unknowable. If America's fascists get their way, all of us could become subject to that kind of treatment, for any reason or none at all. We have been warned. At this point, inaction or passivity in the face of such evil is a choice. Turning away from the politics of cruelty is effectively to endorse it.

on the Republican campaign against migrants