Missing link? A newly-discovered fossil looks like the halfway point between birds and dinosaurs

Cratonavis zhui is a "bird" with T. rex-like skull — and it tells us a lot about avian evolution from dinosaurs 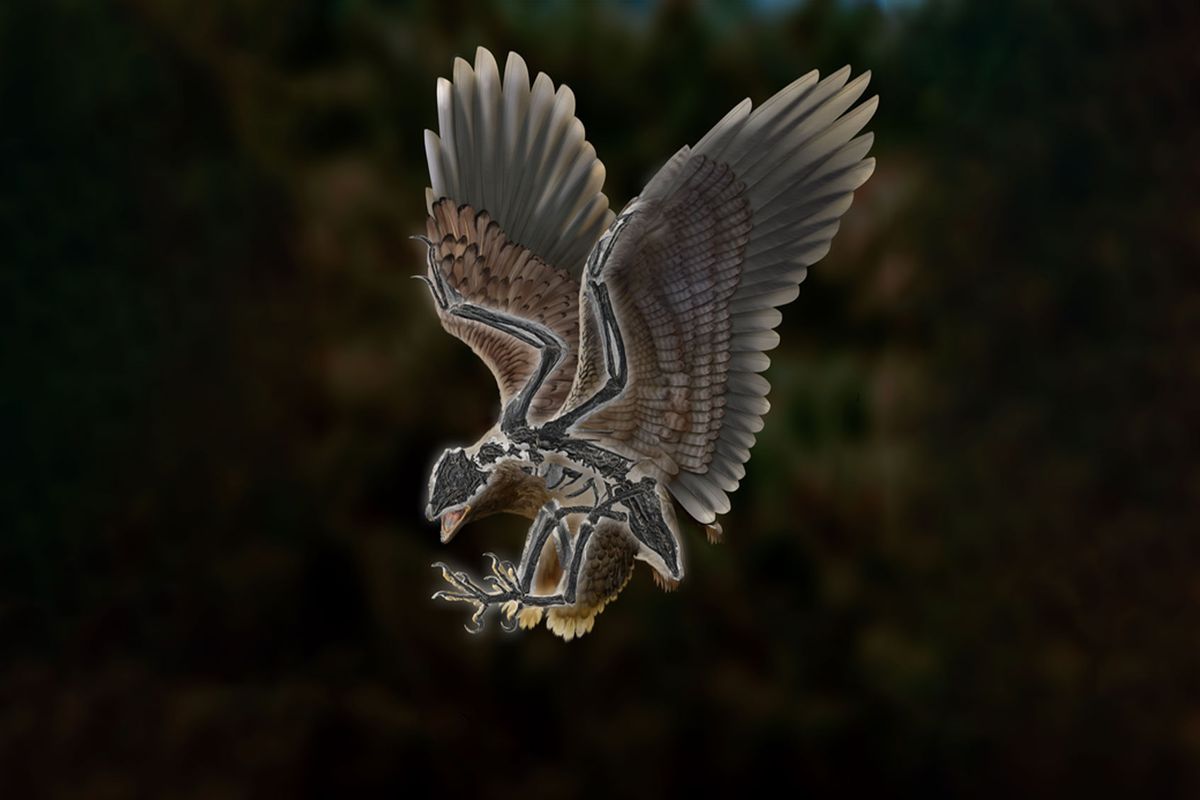 A recently discovered bird with a T. rex-like skull was unearthed in China — epitomizing, in one bizarre fossil, a visual representation of the long, strange evolution from dinosaurs to birds.

Called Cratonavis zhui, the strange hybrid died some 150 million years ago and was uncovered by paleontologists from the Chinese Academy of Sciences in Beijing. Cratonavis most likely behaved like a raptor, flitting from tree to tree and pouncing on prey with its sharp claws. It's a remarkable find that illustrates mosaic evolution, or the slow transition of some traits while others remain the same.

The evolutionary history of birds is nothing short of spectacular. The diversity of feathers, beaks, claws, diet and preferred geography is broad, not to mention the ability to majestically fly better than any other animal. But the differences between birds and dinosaurs are substantial, and experts still aren't entirely sure how this transition happened.

There are other features of the Cratonavis skeleton that are a bit strange. It has an atypically long shoulder blade, a bone called the scapula, as well as longer bones in the feet.

Evolution is a dynamic, not a logical process, and the transition from dinosaurs to birds involved dramatic changes in morphology — it didn't happen all in one single jump. For example, dinosaurs evolved feathers, which became a defining trait of birds, but feathers appeared millions of years before the necessary bone structures for flight. That marks another example of mosaic evolution.

The Cratonavis fossil contains just one adult individual, but this feathered specimen has a lot to tell us about one of the most fascinating aspects of evolutionary history. It was discovered in Xiaotaizi Village in the northeastern Liaoning Province, in a region known as the Jiufotang Formation, which has yielded many fossils from the Early Cretaceous about 100 to 145 million years ago.

The first part of the bird's name comes from the North China Craton, a giant chunk of continental rock that stretches through China into Mongolia and North Korea. The "avis" part simply means "bird" in Latin and the final aspect, "zhui," is a tribute to Dr. Rixiang Zhu, who did much pioneering work in the North China Craton.

The skull, including the sharp, pointy teeth, is also oddly similar to the Jurassic Park logo.

Using an industrial computed tomography scanner, which is sort of like an MRI machine but with a rotating X-ray tube, the researchers blasted the Cratonavis skull with 150 kilovolts of beam energy. This bounced back a 3D image at a resolution just shy of 17 nanometers. A nanometer is one-billionth of a meter. That's pretty high definition for a dead bird (or pseudo-bird).

This allowed the researchers to digitally excavate the skull and reconstruct it, predicting its original shape and function. Then, they compared these features using a data matrix of 280 morphological characters and 82 groups of organisms, including Tyrannosaurus rex and Archaeopteryx sp., one of the earliest known birds.

The scientists discovered that the skull most closely resembled dromaeosaurid Balaur bondoc, an unusual feathered theropod dinosaur that lived on islands about 70 million years ago. The skull, including the sharp, pointy teeth, is also oddly similar to the Jurassic Park logo. However, the rest of its features were far more bird-like. So basically a bird with a dinosaur skull. The findings were published in the peer-reviewed journal Nature Ecology & Evolution on January 2nd.

There are other features of the Cratonavis skeleton that are a bit strange. It has an atypically long shoulder blade, a bone called the scapula, as well as longer bones in the feet, "which are rarely seen in non-avialan paravians," the authors wrote.

To date, this elongated scapula has only been discovered in two other ancient bird fossils, Apsaravis ukhaana and Yixianornis grabaui. "Their evolutionary changes across the dinosaur–bird transition demonstrate how deeply conserved skeletal elements re-acquired evolutionary versatility," the authors wrote.

In other words, this weird bird with the dinosaur head show the unique plasticity of bird evolution. The researchers also hypothesize these strange bone features may represent "experimentation in volant [ability to fly or glide] behavior early in bird diversification," as Dr. Wang Min, a lead author of the study, said in a statement. Ultimately, Cratonavis sheds a lot more light on where birds came from.