Pterosaurs had brightly colored feathers like toucans, according to a new study

"The early function of feathers was then probably different from what we thought," paleontologists say of the find 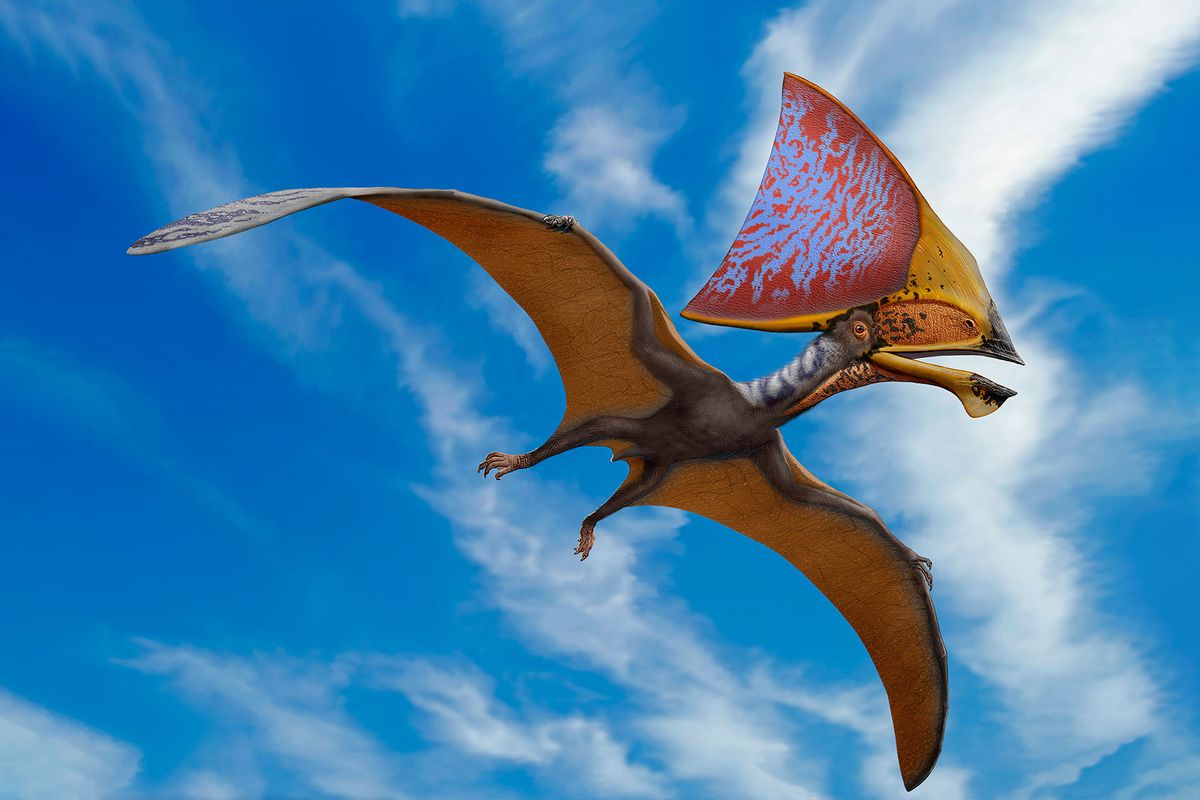 Pterosaurs, flying reptiles that coexisted with dinosaurs, have been on a roll lately — or, rather, their fossils have, as a plethora of recent discoveries has helped flesh out the evolutionary timeline with new insights into prehistoric life.

Last year paleontologists discovered a miniature pterosaur that had opposable thumbs, similar to humans and other primates. Also in 2021, scientists cracked the mystery of how pterodactyls were able to swoop down and scoop up large prey without breaking their necks. (The answer: They had bones in their necks with structures similar to the spokes in bicycle wheels.)

RELATED: Bone scans reveal how the largest flying animal to ever live supported its weight

Now a new study reveals something surprising about pterosaurs: They may have possessed colored feathers like a toucan or a parrot. If true, it would help fit together the evolutionary puzzle pieces that tie together reptiles, dinosaurs and modern birds.

According to a recent study published in the scientific journal Nature, a Brazilian fossil of a pterosaur called Tupandactylus imperator included extensive amounts of soft tissue. Although there are concerns about the fossil's murky origins (which could jeopardize its ability to be considered for legitimate scientific study), its conclusions are nevertheless captivating: The researchers found fossils of microscopic structures known as melanosomes, which scientists can use to learn about animals' structural colors based on the melanosomes' shape, density and distribution throughout the skin.

In the case of this pterosaur, the scientists discovered that there were different shapes of melanosomes in the pterosaur's skin as well as feathery and pillowy filament bodies within its skull. These two features suggest that the pterosaur's skin was not only colored; it had multiple colors. This makes the new fossil stand in stark contrast to its predecessors'; those pterosaurs had melanosomes with the same shapes, meaning they either had the same color or possessed other chemicals in their skin which gave them different hues.

Tupandactylus imperator was a bird-like creature, with a wingspan of around 10 feet, and a large flat protrusion on their head, called a sagittal crest, that stuck up vertically like a shark fin. They lived in the early Cretaceous period, between 145 and 100 million years ago.

"The melanosomes form distinct populations in different feather types and the skin, a feature previously known only in theropod dinosaurs, including birds," the scientists explain in their paper. "These tissue-specific melanosome geometries in pterosaurs indicate that manipulation of feather colour—and thus functions of feathers in visual communication—has deep evolutionary origins. These features show that genetic regulation of melanosome chemistry and shape was active early in feather evolution."

Another study co-author explained to Salon that scientists cannot learn more about dinosaur color for a number of reasons.

"Because we have information on the melanosomes only (other pigment organelles don't preserve that well) we can only infer a melanin-based colour," wrote Aude Cincotta, Directorate Earth and History of Life, Royal Belgian Institute of Natural Sciences, Brussels, Belgium, told Salon in writing. "For example, in Tupandactylus, the pterosaur we studied, we can infer that the monofilaments were black or dark grey and the branched feathers were lighter, probably brown."

Cincotta also shared a story about the moment of discovery, and how satisfying it was to finally attain some clarity on the mystery of dinosaur coloring.

"I can only speak for myself and co-authors here but we were amazed and excited about the finding; it was the first time we saw clearly branching feathers in a pterosaur," Cincotta explained. "Then, when we saw that they had melanosomes of different shapes we were even more excited. Feathers seem to be more than just a body cover in pterosaurs, they had colours and were then probably used for visual display. The early function of feathers was then probably different from what we thought."

For more Salon articles on dinosaurs: