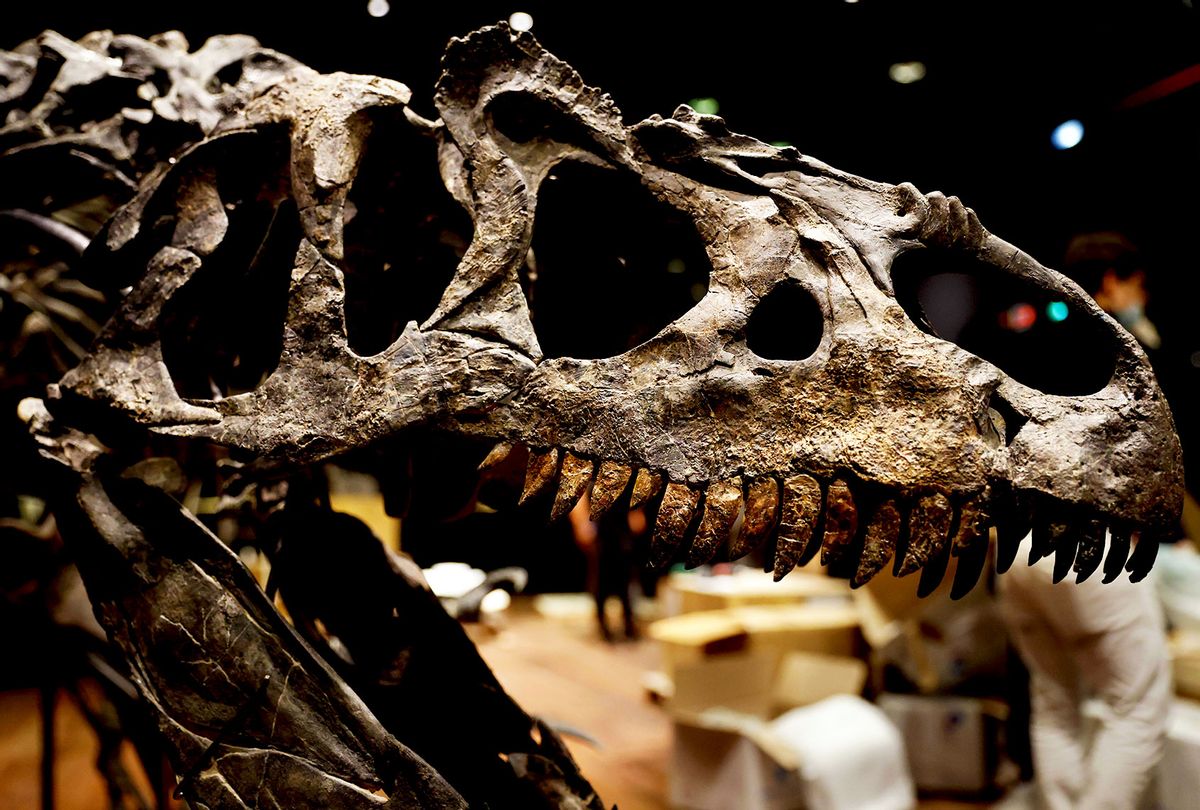 The skull and jaw of an Allosaurus skeleton is displayed at the Drouot auction house, in Paris on October 9, 2020 (THOMAS COEX/AFP via Getty Images)
--

When a dinosaur is named after the fact that it is terrifying, you know that the discovery is massive — in this case, literally.

The freshly discovered carnivore is an abelisaurid, meaning that it stood on two stocky legs and had a massive head with an ornamented skull. (They looked similar to the famous Tyrannosaurus rex, although T-rexes were not abelisaurids.) In a study published Tuesday for the peer-reviewed publication Journal of Vertebrate Paleontology, paleontologists revealed that they had found a well-preserved skull of an abelisaurid so big that it has been dubbed Llukalkan aliocranianus. The second part of its name is Latin for "different skull," but the first part is striking: It is from the language of the Mapuche, who live in the region of Argentina (Patagonia) where the skull was found, and translates as "one who causes fear."

It is easy to see why the Llukalkan aliocranianus would be considered fearsome. When it thrived in the Southern Hemisphere roughly 80 million years, Llukalkan aliocranianus was up to 16 feet long and had very sharp teeth with powerful jaws that could bite down hard on its prey. Based on the structure of its skull, scientists believe that it had an excellent sense of smell and a hearing ability that surpassed even that of other abelisaurids. Its skull had protuberances similar to those you might find today on a Gila monster or certain types of iguanas; its hind legs were strong enough to enable it to dart forward at great speeds; and its feet had large, razor-sharp claws perfect for slicing open its unlucky victims as it crushed them under its weight.

"This is a particularly important discovery because it suggests that the diversity and abundance of abelisaurids were remarkable, not only across Patagonia, but also in more local areas during the dinosaurs' twilight period," Dr. Federico Gianechini, a paleontologist at the National University of San Luis, Argentina who served as lead author on the paper, explained in a statement.

Because the Llukalkan aliocranianus was so different from other abelisaurids that lived at the time, this demonstrates that they were still flourishing and evolving before dinosaurs abruptly went extinct.

"These dinosaurs were still trying out new evolutionary pathways and rapidly diversifying right before they died out completely," Dr. Ariel Mendez from the Patagonian Institute of Geology and Palaeontology, Argentina, who co-authored the paper, said in a statement.

If you're a dinosaur buff, 2021 has already been chock full of exciting new discoveries. In February paleontologists announced that they had discovered the oldest known titanosaur, which they named Ninjatitan zapatai. Titanosaurs were a type of sauropods, or the long-necked, long-tailed and massive behemoths whose most famous members include the brontosaurus, apatosaurus and brachiosaurus. (Think the first dinosaur spotted by the main characters of the 1993 film "Jurassic Park.") Those sauropods were not titanosaurs, but famous titanosaurs include the Notocolossus, the Patagotitan, the Puertasaurus and the Argentinosaurus.

In January paleontologists announced that they had found sauropod bones so large that they would have had to belong to the biggest land animal to ever live. A co-author of the report that revealed the find told Salon at the time that "the specimen here reported strongly suggests the co-existence of the largest and middle-sized titanosaurs" along with smaller sauropods known as rebbachisaurids "at the beginning of the Late Cretaceous in Neuquén Province."

Also in January, paleontologists informed the world that they had found fossilized soft tissue which for the first time ever gave scientists an up-close look at dinosaur butts. The dinosaur had a cloaca, or an anatomical feature commonly found on animals like birds and reptiles that serves as their equivalent of genitals, an anus and a urethra. As corresponding author Dr. Jakob Vinther, a paleontologist at the University of Bristol, told Salon at the time, "the shape of the cloaca is somewhat distinct. It doesn't look like either birds or the close relatives, the crocodiles. It's got a pair of sort of swollen lips on either side that sort of flare out. They sort of join together in one direction and then they flare out towards the tail."