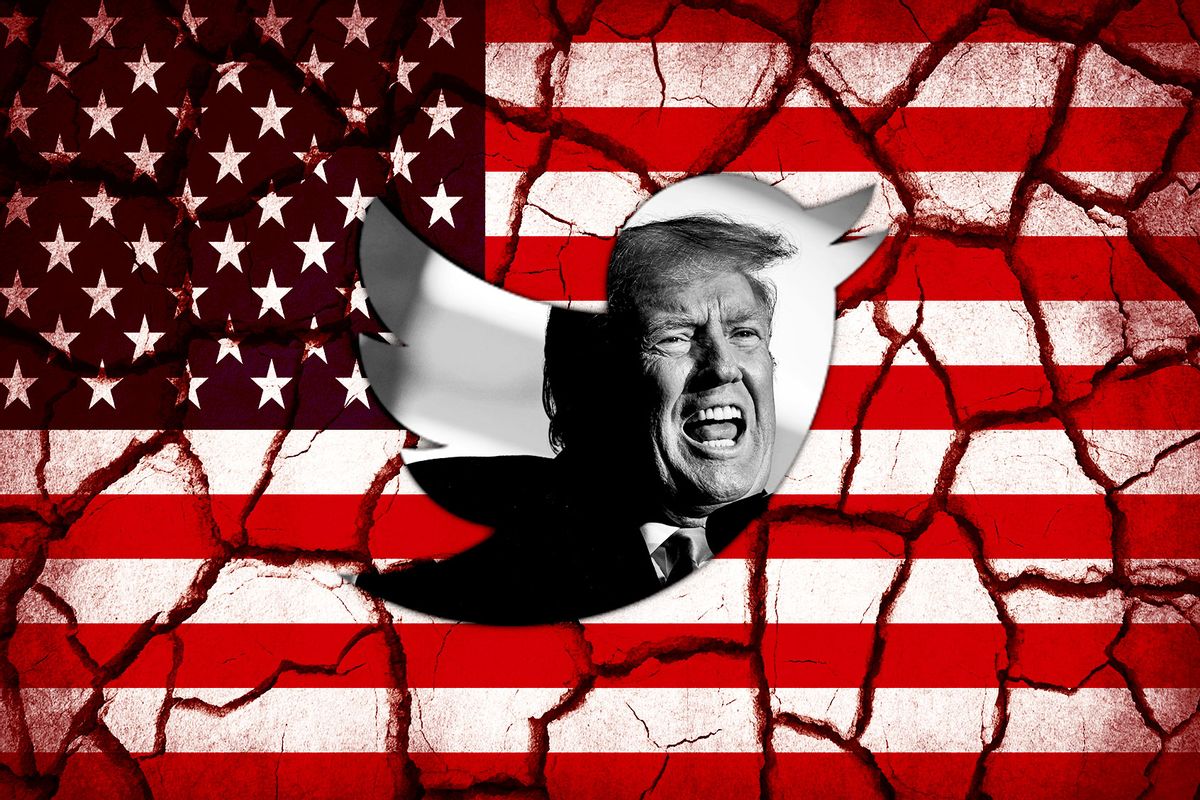 The internet and social media are a type of experience machine.

At their worst, the internet and social media function as a self-reinforcing echo chamber and closed episteme in which many people confuse huge amounts of free and otherwise readily available "information" and "content" with true knowledge and hard-earned expertise.

The Algorithm is designed to keep "users" "engaged" by amplifying negative emotions and feelings of conflict where individuals who are experiencing emotional and spiritual emptiness, loneliness and other unmet human needs are stimulated into an endless if not compulsive cycle of clicks, scrolling, posts, comments, "likes", "shares" and other reactions. To that point, people who engage in "compulsive" internet use are more likely to exhibit the "Dark Triad" traits of Machiavellianism, narcissism, and psychopathy.

In many ways, rage, anger and other negative emotions and behavior are the currency (and business model) of social media and the internet.

In a new essay at TomDispatch (republished at Salon) investigative journalist Andy Kroll reflects on what he learned researching conspiracy theories online and the toxic seductive power and allure of such spaces:

A confession: on a few of those late nights spent in the online ruins, I caught myself starting to nod along with some of the wild-eyed nonsense I was reading. Maybe I found a particular Reddit thread surprisingly convincing. Maybe the post in question had sprinkled a few verifiable facts amid the nonsense to make me think, Huh? Maybe my sixth cup of coffee and lack of sleep had so weakened my mental safeguards that madness itself began to seem at least faintly reasonable. When I felt such heretical thoughts seep into my stream of consciousness, I took it as a sure sign that I should log off and go to bed.

Thinking back on those moments, I admit that the first feeling I have is pure and utter embarrassment. I'm an investigative reporter. I make a living dealing in facts, data and vetted information. Heck, my first job in journalism was as a full-time, trained fact-checker. I should be impervious to the demented siren song of conspiracy theories, right?

The correct answer is indeed: Right. And yet……

That frictionless glide from one post to the next, video after video, tweet upon tweet, plays tricks on the mind. Spend enough time in that realm and even the most absurd theories and narratives start to acquire the patina of logic, the ring of reason. How else to explain the sheer number of QAnon adherents — one in five Americans, according to an analysis by the Public Religion Research Institute — who believe that a secret cabal of pedophile elites, including Tom Hanks and Oprah, run the world, or that the Earth is indeed flat, or that the moon landing more than half a century ago was faked, no matter what news broadcaster Walter Cronkite might have said at the time?

Put simply, we don't stand a chance against the social media companies. Fueled by highly sophisticated algorithms that maximize "engagement" at all costs by feeding users ever more inflammatory content, Facebook, Twitter, YouTube and the rest of them don't simply entertain, inform, or "connect" us. As New York Times reporter Max Fisher writes in his book "The Chaos Machine," "This technology exerts such a powerful pull on our psychology and our identity, and is so pervasive in our lives, that it changes how we think, behave, and relate to one another. The effect, multiplied across billions of users, has been to change society itself."

Spending so much time burrowing into such websites, I came away with a deep sense of just how addictive they are. More than that, they rewire your mind in real-time. I felt it myself. I fear that there's no path out of our strange, increasingly conspiratorial moment, filled with viral lies and rampant disinformation, without rewriting the algorithms that increasingly govern our lives.

As seen on Jan. 6 and throughout the Age of Trump and the global democracy crisis, the internet and social media are a playground and a type of force multiplier for right-wing extremists including fascists, conspiracists, terrorists, religious fundamentalists, white supremacists and other malign actors to organize and plan, as well as to radicalize and recruit new members.

Donald Trump embodies the worst of human behavior. As the leader of a political cult movement, he has given his followers permission to be their true horrible selves. Fascism and other types of illiberal politics are those antisocial and antihuman emotions and impulses harnessed in the form of a reactionary revolutionary destructive political project.

Year of opportunity: Can America escape from political depression in 2023?

To that end, Trump, the Republican fascists, and the larger white right were able to use the internet and social media to grow their base of support into a movement comprised of many tens of millions of (white) Americans. As many democracy experts and other observers have concluded, Trump's rise to power was empowered by the internet, social media, and how the American right wing has spent several decades creating a parallel media machine and other institutions that together function as a type of alternate universe for its followers.

Democrats, liberals, progressives and other pro-democracy Americans have no such equivalent countervailing force.

Writing at the Bulletin of the Atomic Scientists, journalist Alan Miller offers this context:

The 2016 presidential election was a watershed in the evolution of misinformation and disinformation. It was also a breakthrough in public awareness of the scope and impact of harmful misinformation online and of the kaleidoscope of bad actors who produce it.

The public learned how much the companies running the platforms knew (especially Facebook), and how little they had been willing to do to curb it. The public also found out about the Russians' aggressive disinformation campaign to influence the election's outcome, pit Americans against each other, and undermine faith in democracy.

All these forces were at play before Donald Trump became president, but he relentlessly exploited and exacerbated them with constant prevarications and attacks on the news media. When journalists sought to hold him accountable, he dismissed their reporting as "fake news." He systematically eroded political norms and the rule of law. He spread harmful falsehoods about COVID-19 that cost an untold number of lives. And he undermined his supporters' faith in the election process.

Having gone from "alternative facts" (a phrase that entered the lexicon just two days after Trump's inauguration) to alternative realities upon his contentious departure from office, Americans now not only cannot agree on what the facts are; they cannot even agree on what a fact is.

This poses one of the great challenges of our time, because facts are the central nervous system of public life. They are the basis for what is taught in schools. For scientific inquiry and findings. For the legal system and jurisprudence. For societal debates and decisions about what constitutes effective public policy.

And facts most certainly are not partisan. If they are in trouble, we are on the path not only to an information dystopia, but very possibly to autocracy.

Trump, the Republican fascists and their allies were able to use the internet and social media to take control of the White House and other governing institutions as part of a much larger and ongoing assault on American democracy and freedom.

During the midterms, enough Americans voted to slow down the Republican fascists' assault on democracy and freedom. The Democrats would maintain control of the Senate. Instead of a clear majority in the House, the much-discussed "red tide" largely dissipated, leaving the Republican Party with a tenuous majority.

Recent research by Shaun Bowler, Miguel Carreras and Jennifer L. Merolla, which is featured in the journal Political Research Quarterly, suggests that the results of the midterm elections are a sign that Trump's power to use social media and the internet as part of his war on American democracy has been diminishing over time. Moreover, Trump's attempts to mobilize Republican voters and his cultists online may have actually helped the Democrats in the midterms.

Carreras and his colleagues found limited evidence that exposure to some of Trump's rhetoric moved people in a more anti-democratic direction. Independent participants who read Trump's attack on Congress tended to be more supportive of the idea of the president disregarding Congress and the courts. Trump's attack the media also lead to a greater endorsement of the president disregarding Congress among Republicans. These effects were mostly reversed among Democrats.

But the researchers found no evidence that exposure to Trump's tweets attacking the media, Congress, or the courts influenced attitudes regarding support for democracy. Those exposed to the control tweet were just as likely as those exposed to Trump's attacks to agree with the statement "Democracy may have problems, but it is better than any other form of government."

Trump's tweets attacking the media, Congress, or the courts also appeared to have no impact on support for strong leaders among Republican participants but decreased support for strong leaders among Democratic participants. In addition, those exposed to Trump's attack on the media were more likely to disagree with the statement "When the press publishes inaccurate information about the government, the president should be able to remove their license," an effect that was largely driven by Democrats.

"The key finding is that Trump's undemocratic messages in 2019 (a series of Tweets attacking other liberal institutions) did not lead to an erosion of democratic attitudes. On the contrary, the results suggest there is significant pushback against anti-democratic messages, especially among Democrats," Carreras told PsyPost.

This research complements the findings by Jon Green, William Hobbs, Stefan McCabe, and David Lazer as recently published in the prestigious journal Proceedings of the National Academy of Sciences (PNAS) that right-wing conspiracy theories about the Big Lie and "stolen elections" are correlated with lower turnout for Republican candidates in the 2021 Georgia Senate runoff election and increased voting for Democratic candidates.

The abstract of "Online engagement with 2020 election misinformation and turnout in the 2021 Georgia runoff election" summarizes these findings as: "Liking or sharing messages opposed to conspiracy theories was associated with higher turnout than expected in the runoff election, and those who liked or shared tweets promoting fraud-related conspiracy theories were slightly less likely to vote."

At their best, the internet, social media and other digital technologies can be used to improve the human condition by providing information and facilitating communication and coordination in ways, that until very recently, were viewed as almost impossible. Unfortunately, those same traits have empowered malign actors and other anti-social and anti-human forces to attack and subvert democracy and the good society.

As many democracy experts and other watchdogs have repeatedly warned, the ability of the internet and social media and other technologies to exercise an outsized and often profoundly negative impact on society – and to do so under the near exclusive and accountability-free control of corporations and other private actors – highlights the need for more transparency, public accountability and regulation of such technology.

The future of global democracy (and society) may literally depend on how we collectively decide how much and in what ways the internet and social media, and these new technologies more broadly, should influence our lives, futures, and relationships to one another -- and the powerful.

about Trump and fascism