After combing through Rice's journal archives, I think this adaptation would have her turning in her tomb 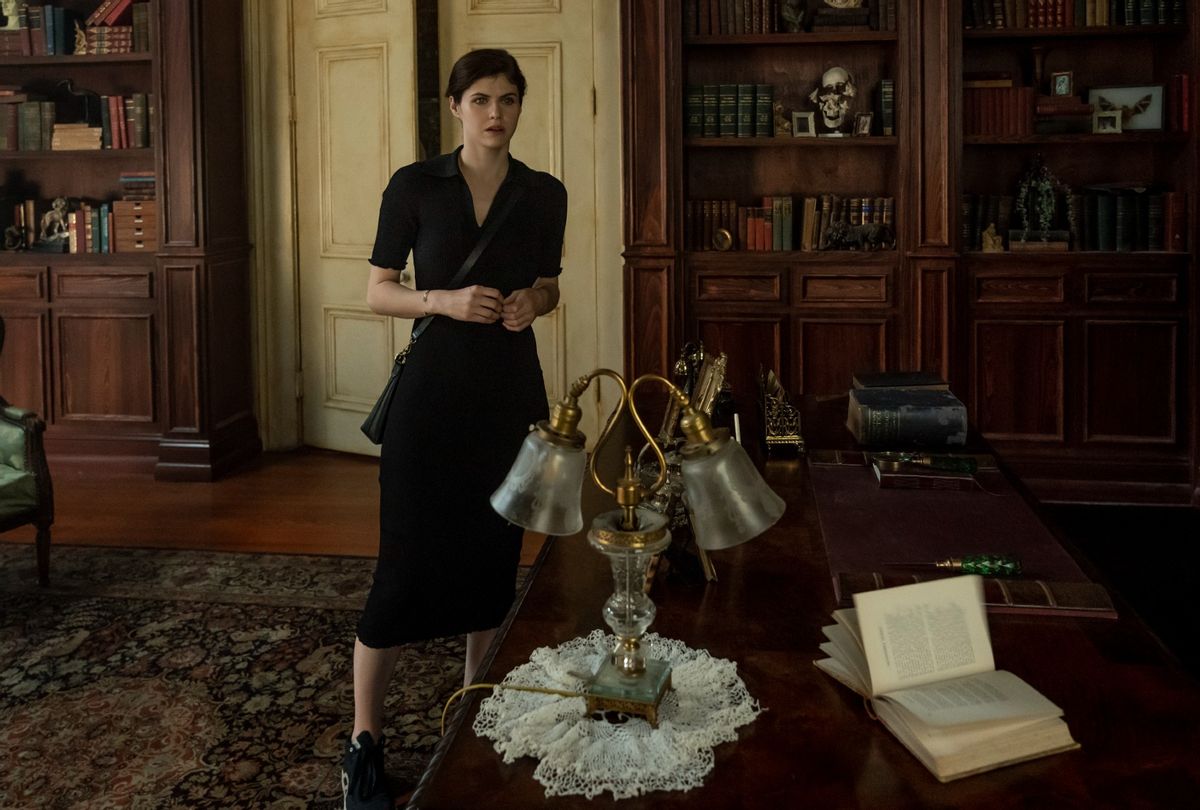 The following contains minor spoilers for the first episode of AMC's "Mayfair Witches."

Once Anne Rice began to gain notoriety as an author after the 1976 release of her debut novel, "Interview with the Vampire," it wasn't long before big name production companies began circling, clamoring for the rights to her work so that it could be adapted for TV and film.

Throughout her career, Rice kept extensive journals chronicling her private life, her pre-manuscript musings on each of her novels, and her business dealings — jotting down frustrations over editor notes, royalties and takeaways from conversations regarding yet another failed studio script based on her work — amidst side commentary on the episodes of "Kojak" and "Miami Vice" that she enjoyed watching on such and such night.

After Rice's death in 2021, these journals, along with her novel drafts and a treasure trove of fan correspondence, were put into the care of Tulane University, which painstakingly archived it all into a collection that may be viewed by the public for the first time ever, by appointment.

Earlier this week I spent four hours at the archive, and only made it through one box of journals. My intent was to conduct research on her writing of the "Lives of the Mayfair Witches," series, which I managed to do. But I couldn't help but get pulled away from the task at hand while hanging on every word, however seemingly trivial (apparently she really liked train sets) that this author whom I've loved since a young teenager wrote in her own scrawling handwriting.

In one journal entry from July 29, 1985, written on a morning that Rice notes as being foggy, she outlines a "fact sheet" from NBC that includes a rundown of the key characteristics for the main characters from "Interview with the Vampire," Louis, Lestat and Claudia. Up in the lefthand margin she writes "IWTV - fact sheet for their crummy script."

And in 2002, a message from Rice transcribed from a fan phone line she used to maintain details yet another adaptation that never worked out, also for NBC, which was to be a "The Witching Hour" miniseries with a script written by John Wilder.

"After three scripts and many meetings, this production was scrapped as well," Rice writes in an update posted to her website. "We were all very disappointed."

As you can see, the writer had a vision for adaptations of her work, and studios never seemed to meet her standards.

The writer had a vision for adaptations of her work and studios never seemed to meet her standards.

"Even when an author works closely with the director, the writer or the actors, the author's voice is only one of many," Rice writes. "Those controlling the financing for a project can shut the production down. Sometimes those who decide the fate of a production have never read the author's books, and have little or no idea as to what the books are about." 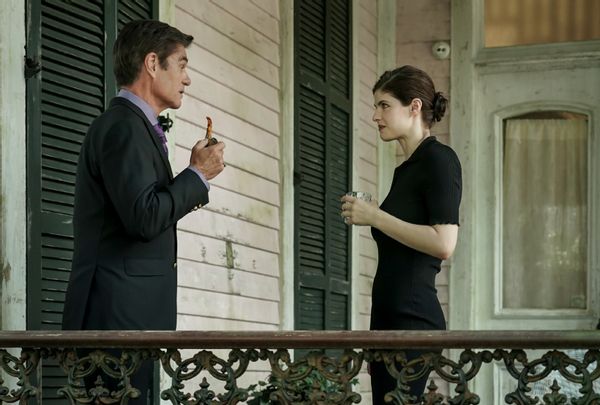 Harry Hamlin as Cortland Mayfair and Alexandra Daddario as Dr. Rowan Fielding in "Anne Rice's Mayfair Witches" (Courtesy of Alfonso Bresciani/AMC)In 2016, after a long struggle with Universal Studios and Imagine Entertainment over the script for their own version of an adaptation of Rice's "Vampire Chronicles," the author won back the rights to her work. In a post to Facebook, she expressed excitement over one day getting this adaptation into the right hands, saying "In this the new Golden Age of television, such a series is THE way to let the entire story of the vampires unfold."

Just over a year and a half prior to her death, Rice sold the rights to "The Vampire Chronicles" and "The Lives of the Mayfair Witches" series — a combined 18 titles in total — to AMC Networks. For an author who once said in a 1993 ABC interview that she despises Hollywood producers and "the studio system," saying, "I can't warn writers enough to stay away from them . . . they will kill you," this was a risky and trusting move. After all, she had already been burned by the process, and the decision was one that she would ultimately not live to see the result of.

Lust for life: How Anne Rice's alcoholism influenced "Interview with the Vampire"

In a statement about AMC's acquisition of the filming rights to her most popular works, Rice said, "It's always been my dream to see the worlds of my two biggest series united under a single roof so that filmmakers could explore the expansive and interconnected universe of my vampires and witches. That dream is now a reality, and the result is one of the most significant and thrilling deals of my long career."

Rice's passing in December 2021 coincided with the early stages of filming for AMC's "Interview with the Vampire," the first of the network's adaptations of her work and one that I, as a fan, believe she would have loved. Although the series did take several artistic liberties, making changes to key characters and story timelines, it brought the source material's queerness to the forefront, which Rice — mother to a gay son and ally to the LGBTQ community who once said, "I feel like I'm gay," in a 2016 interview with The Daily Beast — would have appreciated.

After the success and renewal of AMC's "Interview with the Vampire," the network kept it cranking, announcing a second adaptation, "Anne Rice's Mayfair Witches," the official trailer for which debuted at New York Comic-Con in October 2022.

During a panel with the cast of "Mayfair Witches" at Comic-Con, there were signs that this adaptation would not be as good as the "Interview" adaptation and, having now watched the show, that unfortunately turns out to be correct. While the cast of AMC's "Interview with the Vampire" — namely Sam Reid and Jacob Anderson, who play Lestat de Lioncourt and Louis de Pointe du Lac, respectively — spoke to press often about being huge fans of Rice's work, the majority of the cast of "Anne Rice's Mayfair Witches" were not familiar with the source material prior to signing on to their roles. Only star Alexandra Daddario actually finished reading "The Witching Hour," the first book on which the show is based, admitting on the Entertainment Weekly panel that she did so during filming. Harry Hamlin, who plays Mayfair patriarch Cortland Mayfair, didn't even make it a third of the way through the 1,056-page book.

An expectation for having familiarity with the work being adapted was always a point of contention for Rice, but she's not around to fight the system any longer.

As Rice stated on her website many years prior to this, an expectation for having familiarity with the work being adapted was always a point of contention for her, but she's not around to fight the system any longer.

Now that "Anne Rice's Mayfair Witches" has premiered on AMC, fans will notice one main change that Rice would have surely taken issue with. In the book series — which centers on the women of the Mayfair family and the devilish entity named Lasher (Jack Huston) that's been attached to them for generations — an integral male character named Michael Curry was the central force in getting Rice's early workings of the draft for this book to click. But that character is not present in the show.

In her writing, Rice favored her male characters, as evidenced in "The Vampire Chronicles," which was a veritable undead sausage fest. In one of Rice's journals that contained many notes on the very early workings of "The Witching Hour," she struggled with making herself, let alone her readers, interested in a book primarily about a family of women.

"When I think of 'The Witching Hour,' I think of atmosphere," Rice writes. "I think of wisteria, a falling down house, crazy women, lots of stuff that doesn't seem salient to me, but who the hell cares?"

In a later entry, having brought male energy into the story, she begins to perk up.

"I fear that the male character is saving me," Rice writes. "I was stuck when I had only the women."

"Began to outline Michael and the Talamasca. I fear that the male character is saving me," Rice writes. "I was stuck when I had only the women." 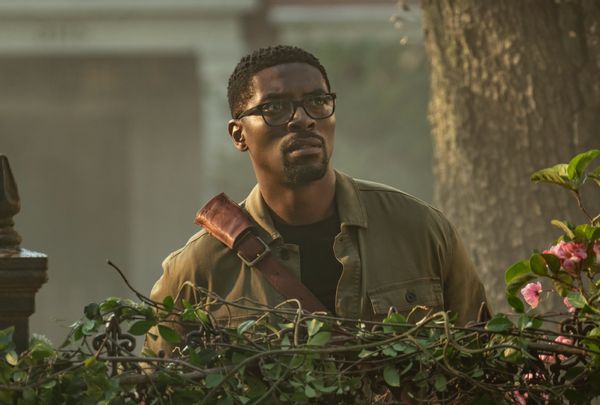 Tongayi Chirisa as Ciprien Grieve in "Anne Rice's Mayfair Witches" (Courtesy of Alfonso Bresciani/AMC)While AMC's latest adaptation of Rice's work has its shining moments, with Daddario captivating in her role as the Mayfair family's 13th witch, Dr. Rowan Fielding, and its attempt to closely mimic the version of New Orleans that Rice envisioned while writing these books, it took her spark for them and left it on the cutting room floor.

There will be no new journals from Rice, in which she surely would have sounded off about this, but feeling as though I've come to know this woman via her archives, I can all but see her stink eye from beyond.