Football-industrial complex makes a rapid recovery: From horror to guilt to inspiration

A man nearly died playing football and we had a moment of introspection about the sport. Then we flipped the script 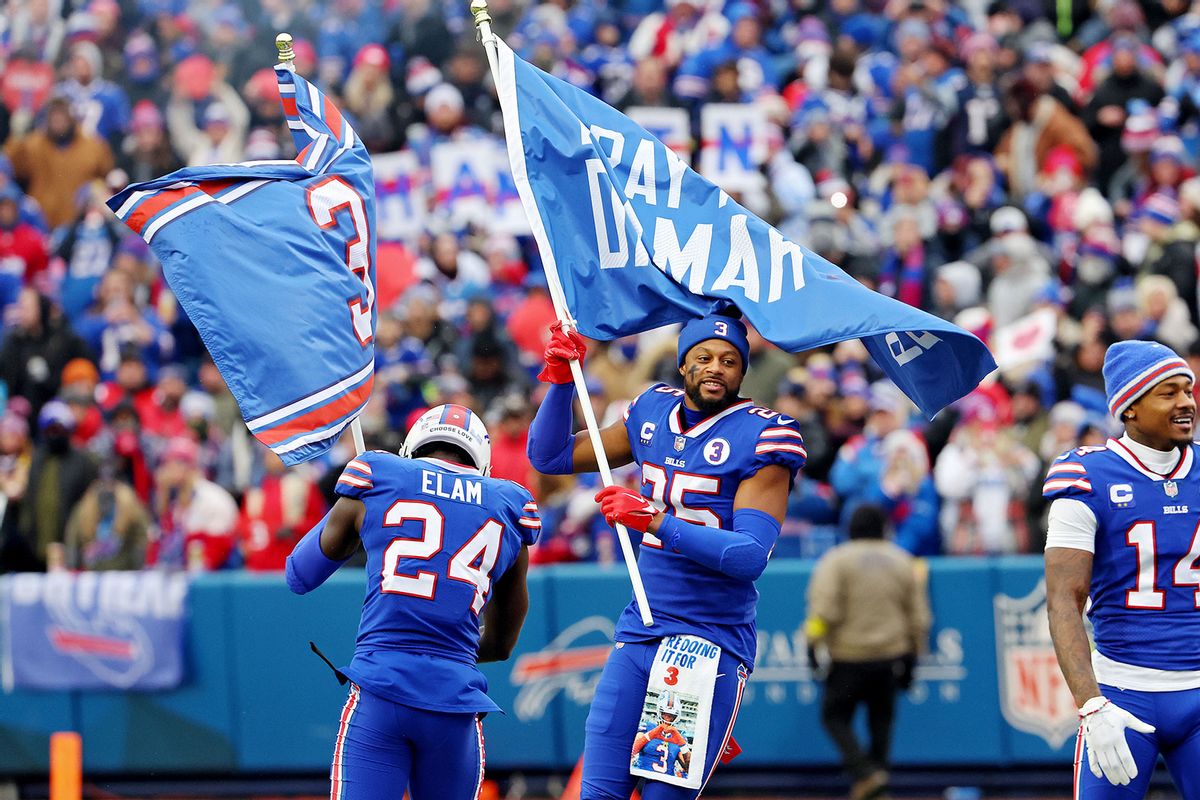 The safety crises of football world have a particular morphology. But before Damar Hamlin the cycle had never played out with such intensity and immediacy. In a span of barely 100 hours, the voices of the chattering class went from narcissistic reflection about fandom's complicity in the sport's recreational violence to a collective clapback at the remarkable triumph of humanity. In other words, we went from "down with football" to "up with people" in record time — and without skipping a beat on the NFL's regular season and playoff calendar.

As nearly everyone knows, in a game on Jan. 2, Hamlin, a 24-year-old defensive back for the Buffalo Bills, collapsed on the field of Paycor Stadium in Cincinnati after making a routine tackle. His heart stopped, in an event that was improbable but not unprecedented: a likely case of commotio cardis, cardiac arrest triggered by a blow to the chest.

Hamlin's heartbeat was revived by emergency medical personnel on the field and he was rushed to the University of Cincinnati Medical Center, unconscious and in critical condition. The NFL bowed to the distraught state of both his Bills teammates and their opponents on the Cincinnati Bengals and suspended the game. Ultimately the league canceled it altogether, which required jury-rigged adjustments to the playoff structure. (That game would have had consequences for home-field advantage.) Nothing like that had ever happened before. The only on-field death in NFL history was in 1971, when Chuck Hughes of the Detroit Lions suffered a fatal heart attack while jogging back to the huddle. On that occasion, the Lions and the Chicago Bears sucked it up and played on. But Hughes wasn't in the prime-time glare of ESPN's "Monday Night Football."

General commentary on the pages of opinion-makers like the New York Times and the Washington Post could be summed up this way: I love watching football, but the gruesomeness of the Hamlin collapse has me pondering whether I'm an enabler of carnage.

But that sort of fretting didn't continue for long: Hamlin's initially grave condition improved dramatically. By last Sunday, he was conscious and communicating with doctors and family members. The Bills won their emotional final regular season game at home, against the New England Patriots. A game ball was awarded to one of the trainers who had helped save Hamlin's life just six days earlier.

Once again the NFL flipped the script, and did so with great skill and — in all fairness — by making the right minute-by-minute decisions. Then again, it's pretty easy to pull off this feat in a society sated only by bread and circuses.

Hamlin himself makes a sympathetic protagonist, now almost universally beloved: a talented young player, apparently liked and respected by teammates, opponents, coaches and fans. Although it's too early to assess his long-term prognosis, his playing days are likely over. He can still expect a future career as an NFL ambassador, TV talking head and all-purpose source of inspiration. That will start with his disposition of the $9 million (at this writing) that has poured into a crowd-sourced charity set up earlier in his career to support children's toy drives.

So this really is a feel-good story, at least up to a point. What is lost in all this, yet again, is anything close to a full consideration of what the cumulative forms of football harm mean in terms of public health.

Not a single voice at any major media outlet has addressed how this near-miss catastrophe could be turned toward downsizing the massive public subsidies, hiding in plain sight, for the NFL's $15 billion enterprise.

So far as I can find in my survey of hot takes, not a single voice at any major outlet has been raised, in any focused way, on how this near-miss catastrophe could be turned toward downsizing the massive public school and public facility subsidies, hiding in plain sight, for the NFL's $15 billion-a-year gladiatorial enterprise. Every year, from high schools all the way down to Pop Warner little league programs, amateur boys are maimed and killed in this blood sport's feeder systems. Some even die in the preseason heat from their coaches' ill-judged extreme conditioning drills, before a single block or tackle in anger.

On Monday, the New York Times published an op-ed by Chris Nowinski of the Concussion Legacy Foundation, a former Harvard football player and WWE performer whose career was curtailed by traumatic brain injury (TBI). Nowinski has done much to raise awareness of chronic traumatic encephalopathy (CTE), and his portfolio includes advocating that youth football be downsized. But here he "left the ball on the ground," as we say when a football player fumbles. That essay was headlined "Football Is Deadly, but Not for the Reasons You Think." Perhaps unconsciously doing the industry's PR cleanup for it, Nowinski decided that the most important message of the moment was to make clear that what happened to Hamlin was an outlier.

Nowinski hasn't responded to my email praising his activism but questioning his message on this occasion. To be clear about my own criticisms of the safety moves touted by Nowinski and others, mostly from an insider industry perspective, I've come to believe that even the conversation surrounding TBI and CTE (football's most dramatic and photogenic health deficits) inadvertently builds a public education bridge to nowhere. At the end of the day, Football World and its patrons appear quite content to absorb repeated anecdotes about how football kills the brain — preferably, that of a beloved (or despised, or controversial) celebrity. Who did you say was playing in the wild card round this weekend?

about the hazards of football