The NFL star's televised cardiac arrest shocked the nation. It's one of many severe health risks players may face 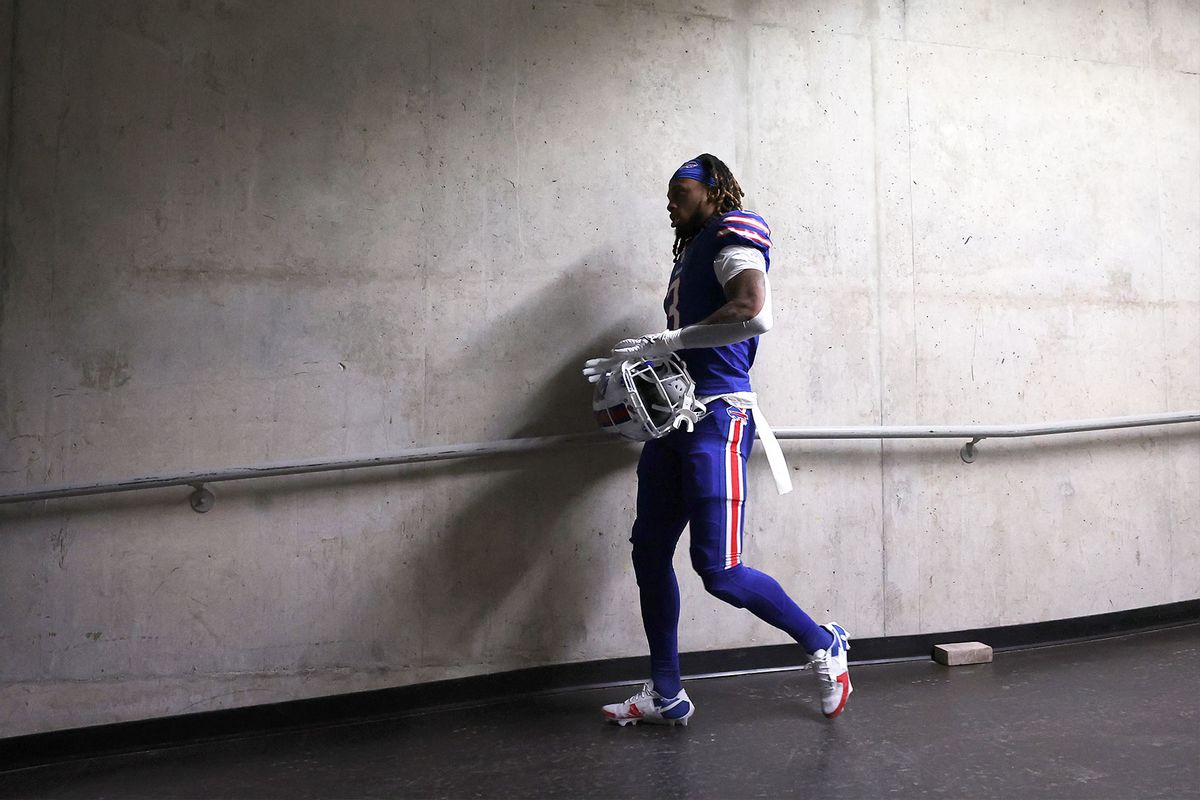 Damar Hamlin #3 of the Buffalo Bills walks through a tunnel during pregame against the Cleveland Browns at Ford Field on November 20, 2022 in Detroit, Michigan. (Gregory Shamus/Getty Images)
--

The catastrophe of Buffalo Bills player Damar Hamlin on ESPN's "Monday Night Football," which caused the unprecedented suspension of an NFL game, brought home for a national TV audience the variegated harms of America's most popular sport. (At this writing, Hamlin is in critical condition in a Cincinnati hospital. He reportedly had to be resuscitated twice, first on the field and later at the hospital.)

Hamlin suffered cardiac arrest after a blow to the chest while making a fairly routine tackle. It may have been caused by a condition called commotio cordis. Doctors are still assessing whether there were other contributing factors for Hamlin. Similar cardiac events have taken the lives of at least 12 football players at all levels, according to data assembled by Scott Anderson, the retired head athletic trainer of the University of Oklahoma's football team. The most recent was Michael T. Ellsessar, a 16-year-old high school player in Sutton, Massachusetts, in 2010.

There are multiple observations one could make about the cold-hearted calculus of the NFL and football world. Some of them surround the domino effect on the league's TV and potential playoff schedules from suspending the game after Hamlin's Buffalo Bills teammates and the opposing Cincinnati Bengals players were obviously in no state to continue playing.

To these, I add something I saw on my feed of the ESPN broadcast, via a California cable system: As studio commentators were vamping during the long delay while Hamlin was being treated on the field — in what felt like a sports-world variation on TV's JFK assassination vigil — a pop-up message came on my screen. I don't know if it was really part of the ESPN production or, perhaps, some kind of creepy techno prank out of "Black Mirror." The screen overlay informed viewers that all gambling action that night was being waived in the wake of the Hamlin tragedy. The message was fleeting and I didn't capture the full text or the company purportedly behind it (it was not DraftKings). I assumed this would leave a footprint on social media, but so far I have not located one.

Getting back to football and death and near-death … A cynic might say that it would have been the football world's worst nightmare if Hamlin's terrible injury had resulted not from a single, discrete hit, but rather from an accumulation of hits, a flashback to an earlier collision or collisions that had caused, for example, a brain bleed.

In all the current fashionable — and, in my opinion, superficial — attention to concussions, the viewing public remains little aware that the phenomenon of chronic traumatic encephalopathy (CTE) does not require a concussion or concussions per se. It can also result from multiple sub-concussive hits.

As terrifying as what happened to Hamlin was, a cardiac event might have seemed extraneous to football. In 1971, Detroit Lions wide receiver Chuck Hughes died of a heart attack during an NFL game. If commotio cordis was the cause of Hamlin's collapse, though, his cardiac arrest would also be tied to the trauma of violent contact. So Hamlin's injury could have been something of a "hybrid" bad case.

It remains to be seen what lasting lessons are drawn from this tragedy in terms of the participation levels in football, all the way down to high school, middle school and pee-wee leagues. While the nation's conversation proceeds over the libertarian limits of ultra-professional gladiators who literally risk their lives to entertain the masses, the use of our public schools, public fields and other subsidies to support this $15 billion-a-year industry requires a different perspective. Football does not need to be banned, and given its gravity-defying popularity, cannot be banned. But, like cigarette smoking or any other socially acceptable activity that damages public health, it ought to be downsized.

Every year in this country, several kids drop dead just from maniacal football coaches' over-the-top conditioning drills, which are mostly performative exercises in "toughness." People aren't just dying from concussions. They are suffering lifelong neurological, orthopedic or internal organ damage of various kinds, at tremendous cost to public health, lost productivity and metrics of substance abuse and domestic violence. Counting on Damar Hamlin's gruesome and tragic collapse to change these dynamics is probably a bad bet.

from Irvin Muchnick on football